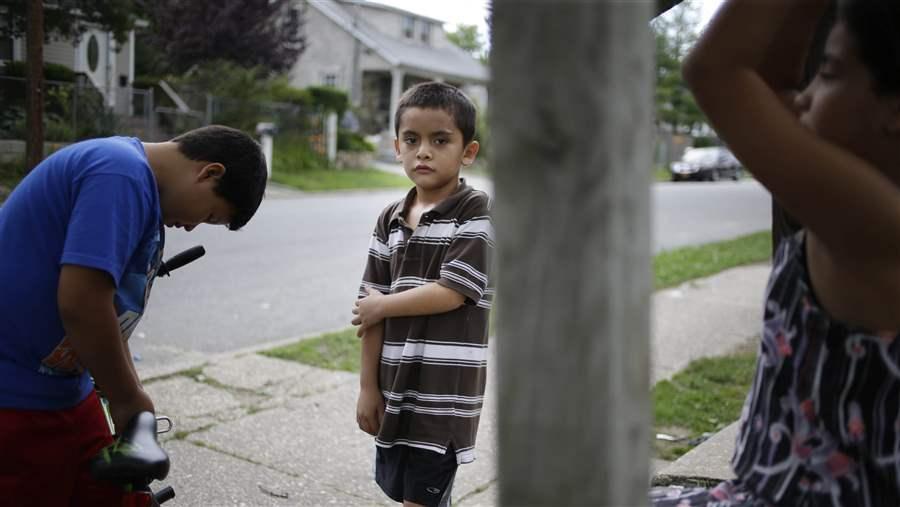 Kevin Torres plays with neighbors in the front yard of his apartment building in Huntington Station, New York. The boy arrived unaccompanied from El Salvador in May 2014. The surge of immigrant children has strained federal and local services. (AP)

In 2014, roughly 69,000 kids from El Salvador, Guatemala and Honduras flooded the U.S.-Mexico border, traveling alone at great personal peril. Many were teenagers fleeing gang violence — all three countries are among the most dangerous in the Western Hemisphere. Many of the unaccompanied children were under 12. Many were trying to join family members already living in the U.S.

This “surge” of migrant children — their numbers had nearly doubled from the previous year —created a crisis in U.S. detention facilities, and overwhelmed states and municipalities. Some have been granted asylum. Most have not. Advocates, including the United Nations High Commissioner for Refugees, recommended the children be treated as refugees. (The federal government calls the children’s plight a “humanitarian crisis,” but does not consider them refugees.) Some communities made it clear the children were not welcome. Others threw open their doors.

A year later, the number of unaccompanied children arriving at U.S. borders has dropped significantly. But the immigration status of many of these children remains in flux. Of the 112,784 children who have arrived in the U.S. since 2012, 67,699 still had cases pending as of June, according to Marc Rosenblum, deputy director of the U.S. immigration program for the Migration Policy Institute (MPI), a nonprofit in Washington, D.C., that studies international migration and government policies. 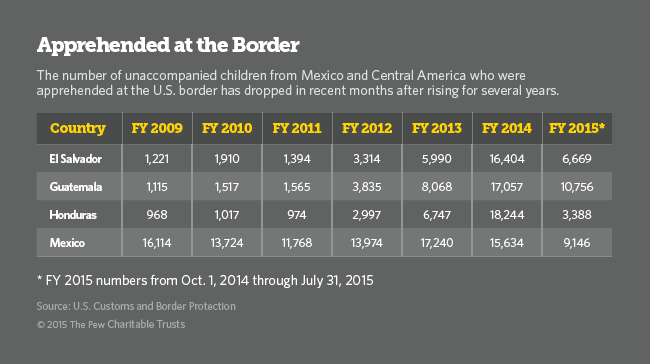 Why have the numbers of unaccompanied children crossing the border decreased?

The number of children apprehended at the Southwest border has dropped more than 50 percent so far in the fiscal year 2015 that began Oct. 1. One reason is Mexico has been apprehending more unaccompanied children at its borders and deporting them to their home countries. According to the Pew Research Center, in the first five months of this fiscal year, Mexico deported 3,819 children, a 56 percent increase from the same period last year. (Pew also funds Stateline.)

If the apprehensions continue at the same pace, the number of Central American children entering the U.S. illegally will be cut in half, while the number apprehended in Mexico is expected to double.

Mexican officials also have cracked down on the number of migrants riding “La Bestia” (“The Beast”), the “train of death” that many Central American migrants hop on to enter Mexico before crossing into the U.S. Meanwhile, the governments of El Salvador, Guatemala and Honduras have launched extensive public relations campaigns to dispel rumors that once the children crossed the U.S. border, they would be allowed to stay. (Many smugglers had spread this misinformation in an effort to drum up business.)

Although fewer children are entering the U.S. alone, the violence in their home countries has not decreased. Violence in El Salvador has actually increased, according to the MPI.

Which states have taken in the most children?

California, New York, Texas and the Washington, D.C., region that includes Virginia and Maryland have taken in the most children. Those states have large Central American populations. Most of the children were released to family members; a few of them have no family in the U.S. and have been placed with foster families. But they’re not being held in detention facilities, according to the MPI. Under federal law, unaccompanied minors must be moved out of detention centers within 72 hours.

What legal recourse do these children have?

It’s complicated. Children who aren’t immediately deported eventually have their cases heard in immigration courts, which are federal courts, or they directly appeal to the United States Citizenship and Immigration Services (USCIS). Last year, President Barack Obama’s administration asked to have the court cases expedited. But some minors are seeking Special Immigrant Juveniles Status, which requires them to prove they have been abused, abandoned or neglected by a parent. If state courts determine that a child meets any of the criteria, he or she is made a ward of the state. From there, the immigration courts or USCIS determine the fate of the child.

Compounding the issue: Many children are without legal representation and often miss their court days, triggering an automatic deportation order, advocates say. But those orders are often not enforced for years.

What can states do to help?

Again, it’s complicated. Advocates for the children argue there is a great deal of inconsistency in the way they are treated from state to state. Last year, California Gov. Jerry Brown, a Democrat, signed into law a bill allocating $3 million in legal aid for the immigrant children. But advocates say that the bill won’t do much to alleviate the great backlog of court cases.

Most efforts to help the children are happening at the federal, county or municipal level. In most cases, it is the schools that will be responsible for these children. Again, the way they are treated can vary greatly from jurisdiction to jurisdiction. The New York City Council allocated $1.5 million to provide services for the unaccompanied children. But on neighboring Long Island, immigrant children have encountered obstacles when they tried to register for school.

What has the federal government done to help?

In December, the Obama administration established the Central American Minors/Refugee Parole program, an in-country processing program in El Salvador, Guatemala and Honduras. The program aims to reunite children fleeing from violence in Central America with parents who are living legally in the U.S. But to qualify, children must meet the strict government definition of “refugee” or be granted emergency humanitarian parole on a case-by-case basis.

Few will actually qualify, according to the MPI. The children have to prove that they’re being persecuted or fear being persecuted on the basis of their race, religion or political affiliation. Being targeted by a criminal gang doesn’t fall into that protected category.

The children are generally not considered refugees. But because they are minors when they first enter the U.S., their care is overseen by the Office of Refugee Resettlement (ORR). The ORR is responsible for assessing the needs of the children and placing them with a sponsor (usually a family member) as they await immigration proceedings. The ORR tracks these children, but advocates say that the agency is underfunded and only has the capacity to track a small percentage of the unaccompanied children once they enter the U.S.

What type of legal representation do these children have?

Children with lawyers are much more likely to be granted permission to stay in the U.S. But there aren’t enough pro-bono attorneys to represent these minors in immigration court for free.

Even though the Obama administration has expedited the process for these children, the courts are severely backlogged, advocates say. And cases involving kids without legal representation take longer to work their way through the court system, further contributing to the backlog, according to the MPI.

What challenges do these children face in the U.S.?

Most of these children have witnessed violence in their home countries, and many may suffer from Post-Traumatic Stress Disorder or other emotional and mental health issues. Reuniting with parents they might not have seen since they were toddlers also causes stress. Most speak limited English and need special language classes.

Without intervention, these children are vulnerable to dropping out of school and getting caught up in the juvenile justice system, advocates say.

“The fantasy is that these kids have made it through this arduous trip, reunited with family and live happily ever after,” said Abel Nuñez, executive director of the Central American Resource Center in Washington, D.C. “The reality is much more complex. These children are in our communities, our schools, our health systems. And these kids are not going to wait until the U.S. figures out what to do with them. They’re going to be living their lives, right here.”