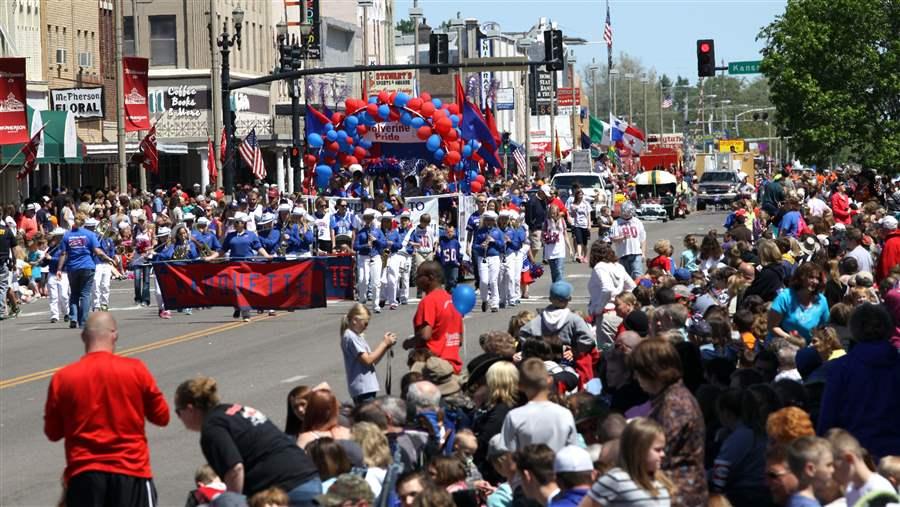 People gather for the annual McPherson County All Schools Day parade. Kansas is among the states seeking to counter shrinking population in rural counties with tax incentives and other programs.

Bill Longnecker grew up in rural Nebraska and, after trying life in Kansas City, Missouri, and other urban areas, returned to his home state to start a jewelry store in Red Willow County, population 10,867.

He loves it there.

“All we need is more people,” he said. Every year when high school graduates head off to college, locals present them with a mailbox imprinted with a map of the area. “We’re hoping they’ll find their way back,” Longnecker said. Few do.

As a result, some states with dwindling rural populations, such as Nebraska and Kansas, are trying to lure people with tax incentives, and small, shrinking localities are looking for ways to share services or cut back as the pool of taxpayers shrinks.

They’ve tried shifting schools online in Colorado, and reverting to gravel roads in North Dakota and Michigan. The 251 residents of the village of Brokaw, Wisconsin, have launched an online campaign to raise $2.5 million toward a $3.8 million budget shortfall.

“[Population losses] are immediately a slap to the local funding base for rural counties, because of the loss of property taxes,” said Arthur Scott, who works on rural issues for the National Association of Counties.

“Counties are regionalizing and sharing resources in the face of this rural flight, which is the long-term impact when the younger generation just leaves after college, because there’s no job opportunities that make it fiscally viable for you to return back home,” Scott said.

Faced with declining rural populations, Kansas decided in 2011 to offer incentives to people who move to a rural county with population losses. Kansas is offering state income tax breaks to people from out of state and will repay a portion of the student loans of Kansans.

Dr. Rachael Cavenee took advantage of the program. She moved to Greeley County in 2013 after attending college in Colorado and graduate school in eastern Kansas. She started an audiology clinic, which allows her time at home with her husband and two children.

Greeley County lost about a quarter of its population between 1994 and 2010, but has gained slightly since 2010, to about 1,300 people. Cavenee said she quickly came to love the area’s friendliness.

“My fear of moving here has evolved into a fear of ever having to move away,” Cavenee said. “This is where you can find genuine, supportive people. This is where we chose to raise our family.”

In a report earlier this year, Kansas estimated that the 330 people who got income-tax breaks in 2014 brought in more than $44 million in economic benefits. That year, 993 people got student-loan subsidies.

Some analysts are skeptical about the plan’s strategy of paying people to move to rural areas.

The program “may help a few families here and there, which is of course very important for those people and can give positive examples to some communities,” said László Kulcsár, a demographer at Kansas State University. “But we have to remember that it was designed to counter long-term depopulation, in which it is terribly ineffective.”

Nebraska started accepting applications this year for enterprise zones that would encourage new businesses in areas with declining population and high rates of poverty and unemployment.

In another effort aimed at rural Kansas, where aging business owners may have trouble cashing out when they retire, the University of Kansas School of Business has a program called RedTire that helps match college graduates to opportunities to buy rural businesses.

Michelle Reed, who moved to rural McPherson from Orange County, California, this month, said she was struck by the number of help wanted signs, businesses that closed several days a week for lack of employees, and business owners unable to cash out and retire. McPherson is a city of 13,322.

“There are older business owners who would like to sell, but there are no buyers in town,” Reed said. “We need to somehow make it hip to have chickens and farm to table in the heartland, and get the young adults to move east.”

Historically, despite losses in agricultural and mining areas, rural population has grown as suburbia has expanded or retirees sought scenic, low-cost destinations, according to a June report from the U.S. Department of Agriculture (USDA). The department excludes from its definition of rural and small-town areas all commuter areas clustered around cities of 50,000 or more.

Overall, the country’s rural population dipped for the first time between 2010 and 2014, the USDA report said, as the number of people moving to economically hard-hit areas dropped. There were sharp contrasts within individual states. An oil boom gave North Dakota the largest rural population gain in the nation at 10 percent, but 16 agricultural counties on the east side of the state lost population.

Coal- and timber-dependent counties have also been hard-hit as those industries founder in the face of less expensive natural gas and as electronic, digital information reduces the need for paper.

High school students in rural Coos County, New Hampshire, a major pulp and paper producer, were asked by researchers if it was easy for somebody their age to get a job in the county (population 31,653). In 2008, two-thirds said it was easy. Three years later, only one in five said so.

Some of the biggest rural losses are in coal country. The largest population decline from 1994 to 2010 was in West Virginia’s McDowell County, historically the state’s coal capital, which lost 38 percent. It fell another 8 percent since 2010 and the county now has about 20,000 people.

About half the rural counties in Nebraska, North Dakota and Kansas have lost more than 1 in 10 people since 1994.

Some analysts argue that simple math keeps rural college students from going home: Is there a job for me that will pay my student loans, or enough income from a small-town business or farm to support a family? Often the answer is no.

Population decline has been a fact of life in parts of Kansas for 50 years, Kulcsár, the demographer, said. What’s made it worse recently is that there aren’t enough babies to replace people who are moving out and retiring baby boomers are depriving rural areas of a large part of their workforce.

If there’s a chance to lure people back, it may be later in life, after they’ve had children, according to a USDA report released last month. This is especially true for those whose parents still live in their hometowns.

“Conversations about returning home centered on the value of family connections for child raising in a small-town environment,” the report concluded.

Diminished revenue is an ongoing strain on local governments, one that the National Association of Counties thinks should be addressed by counties consolidating services and applying for grants together.

School has largely shifted online in Branson, Colorado, where a regional school system has just 52 students remaining in a brick-and-mortar school building, said Lori Green, the school district’s assistant business manager. The system has helped to preserve jobs in a district with shrinking enrollment, Green said. Branson is in Las Animas County, which had one of the biggest rural population losses between 2010 and 2014, with almost one in 10 of its 14,000 residents leaving.

As early as 2010, towns and counties in North Dakota and Michigan were converting paved roads to gravel—and some counties in Ohio were simply letting them erode—to save on maintenance costs, according to a Wall Street Journal report.

Meanwhile, the residents of Brokaw, Wisconsin, which saw its population drop and tax revenue plunge since a paper plant closed in 2012, have raised $756 in their online crowdfunding effort to close the $3.8 million budget gap.

“Without money coming in, you don’t pave the roads, you don’t pick up the trash, you don’t upgrade the sewer system,” said Doug Farquhar, a program director at the National Conference of State Legislatures.