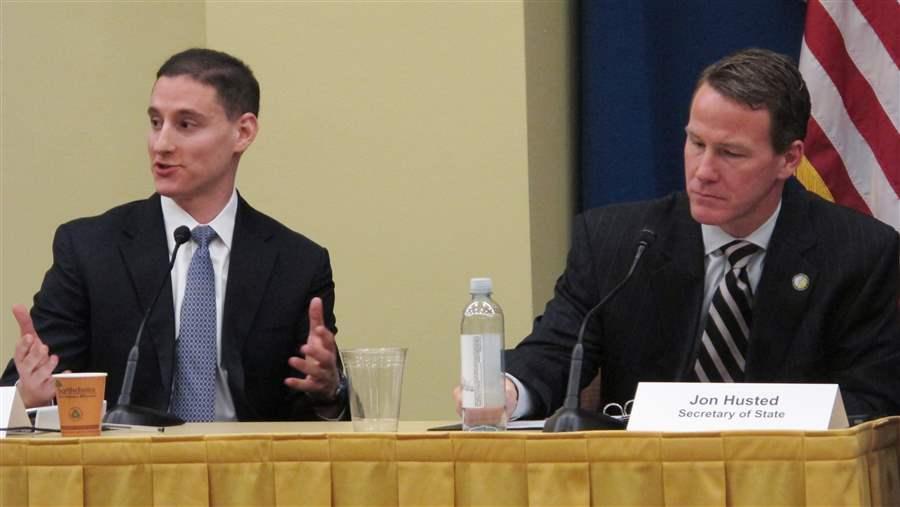 Ohio Treasurer Josh Mandel was mortified when a consumer watchdog group last year gave his state a D-minus for transparency in providing online access to information on government spending.

So he decided to do something about it.

In December, Mandel’s office launched a user-friendly, cutting-edge financial transparency website that this year earned Ohio the only A-plus in a national review of state websites that tell the public how state government spends taxpayer money.

Every state now runs some kind of public accountability—or “checkbook”—site. The goal is to increase transparency and accountability. But while many states have been ramping up their efforts to make their sites accessible and comprehensive, some still have a long way to go. Eighteen states were graded between C and F in an annual evaluation of the sites this year by the U.S. Public Interest Research Group (U.S. PIRG).

State checkbook websites vary considerably. Some are easy to use and provide lots of information with one click, making it easy for users to unearth individual payments to a person or company. Others are difficult to navigate or don’t contain as much information.

“There is a lot of variation. If you were to compare Ohio with Alaska or Idaho, you’d see huge differences in how user-friendly it is,” said Phineas Baxandall, a senior analyst at U.S. PIRG, which published this year’s ratings in March.

Every year, states spend hundreds of billions of dollars contracting with private vendors and nonprofits, handing out subsidies, such as tax credits, to companies to spur development and making other expenditures. States created the checkbook websites to open up information about that spending to the public. The sites tell taxpayers who is getting the money, and what for.

“It’s extremely important because you have a new set of eyes on this information, not just those of someone in government,” said LaVita Tuff, a policy analyst at the Sunlight Foundation, a nonprofit that promotes open government.

State financial officials say that checkbook websites can help save money by identifying inefficiencies and reducing the amount of time spent by staff filling information requests. Posting contract information on the websites can result in more competitive bidding and lower bids. For example, interested vendors might see that they could win a contract by offering a lower price, and state agencies might see that they could consolidate contracts to get a better deal.

Massachusetts saved $3 million by eliminating paper, postage and printing expenses related to information requests by state agencies and paperwork from vendors, according to U.S. PIRG. Texas was able to renegotiate its copier machine lease and save $33 million over three years. And in South Dakota, a reporter used the website to launch an investigation into subsidies that led to the state saving about $19 million by eliminating redundancies.

“I think these websites are very important,” said Kinney Poynter, executive director of the National Association of State Auditors, Comptrollers and Treasurers. “More transparency provides better information for all of those involved, whether they be citizens, contractors or legislative bodies.”

The U.S. PIRG report, in its sixth year, evaluates and grades states on their online transparency initiatives and how well they provide access to spending data. It examines whether checkbook sites offer comprehensive, one-stop, one-click access to users and make large sets of data easy to download.

A growing number of states are doing a better job, the report found. Fourteen got an A this year, up from eight last year. Louisiana and Illinois were among those that got bumped up.

Other states that made strides included Colorado, which got a B-plus after it re-launched its portal, now easier to use, and Kansas, which vaulted from a D-minus to a B by overhauling its site to make information more accessible and easier to download.

Connecticut, which got an A for the first time this year, recently launched OpenCheckbook, an easy to use, comprehensive site that allows users to search real-time information about payments to vendors, nonprofits and others.

“You not only have direct access to micro and macro information about the operation of state government, but you can search it, compare it, trend it and download big data sets,” said State Comptroller Kevin Lembo, a Democrat. “I’d like to think that we’re pushing the envelope in this area.”

Lembo said that because government officials “like to keep information close,” checkbook websites are especially important for transparency.

“We don’t like other people telling us we’re doing things wrong,” he said. “The result of pulling information in and holding it tight is that public confidence continues to erode.”

Lembo said he was so pleased with OpenCheckbook, which was paid for with existing funds in his budget, that last month he launched OpenBudget, a new feature that will let users compare what was budgeted to what was actually spent.

But not all states have improved their websites enough, according to the U.S. PIRG report.

Fifteen got a C or a D. And California, Alaska and Idaho were graded an F in 2014 and again in 2015. Two of the three don’t have a central one-stop database for searching or viewing details on spending, the report found. Not one of the three provides information on economic development subsidies.

“These three are not user-friendly,” said U.S. PIRG’s Baxandall, who coauthored the report. “It’s like finding a needle in a haystack.”

After last year’s embarrassment, Ohio Treasurer Mandel, a Republican, said he “embarked on a mission” to create an online tool that would empower taxpayers to hold state government accountable. The result was to create a website that Baxandall calls “state of the art.”

The site, OhioCheckbook.com, uses a Google-style search engine that’s easy to navigate, along with interactive charts. It lists every state government expenditure, the official responsible for each contract and his contact information. Users can search, compare, share and download more than $473 billion in spending data from the past eight fiscal years.

“This site is not built with the MIT computer science major in mind. It’s built with the most basic computer user in mind,” said Mandel, who noted that 284,000 searches have been conducted on the site since its launch in December.

Mandel said his website was built in 18 months and cost $814,000, all of which came from his existing budget.

“We’re confident this will save taxpayers money,” he said. “Politicians and bureaucrats are thinking more about their expenditures because they know it’s going to be posted online.”

Mandel said his next move is to convince the state’s more than 3,900 local governments to post their own spending information on the site. Earlier this month, a state legislative panel gave him permission to use $2.7 million of his agency’s funds, over the next two years, to pay for a program that would expand the website to include local government expenditures.

Mandel said 245 local governments already have committed to the partnership, and more than 300 others have expressed interest.

Even the states with the best checkbook sites can still do better, U.S. PIRG’s Baxandall says.

No state website, for example, includes spending for all quasi-governmental entities, such as agencies that operate toll roads or special boards, or public-private partnerships.

But Baxandall said that some states, such as Florida, Massachusetts and Oregon, are starting to include some of that information on their websites.

“Those are areas where transparency is particularly important because they’re normally outside the scrutiny of the public or the budget process,” he said.

Baxandall said that the state websites also should compare what’s being budgeted to what’s being spent and that they should follow Ohio’s lead in working with local governments to post data on their spending as well.

The next step toward transparency, Baxandall added, might be for states to try to put the reams of financial data into context and figure out what was accomplished.

“Are they on target? Have they completed 20 percent of the work? That’s a lot of analysis and it requires a lot of time and effort,” he said. “That might be Transparency 2.0. We’ve got all this data out there, but what does it all mean?”

Poynter, of the auditors’ group, agrees that it would be helpful if states can attach some meaning to the data they put online.

“There is so much information,” Poynter said. “At what point does it become overwhelming and it loses meaning? It’s important to put the information in some kind of context.”

“The technology has evolved so significantly that our work is never going to be ending,” Lembo said. “We’re always going to be looking for the next best way to open the curtain and engage the public.”