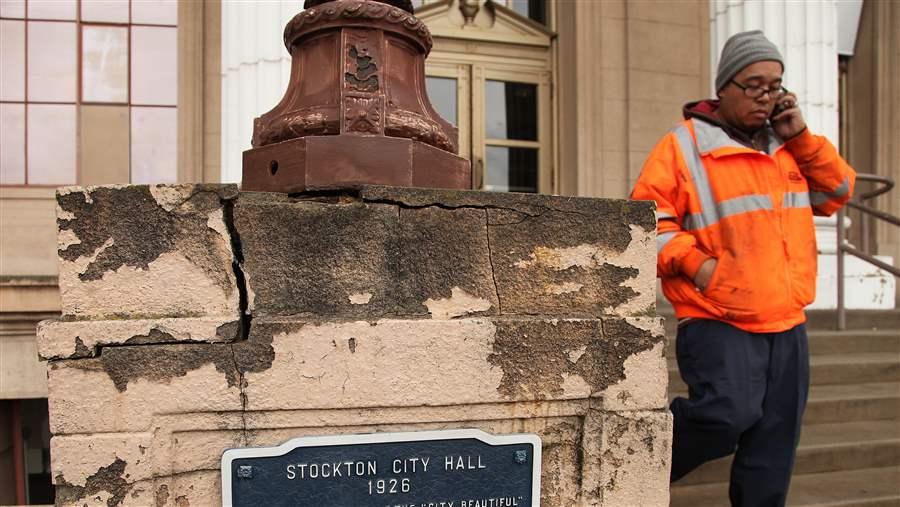 A city worker leaves City Hall in Stockton, California. The city’s sale of $125 million in pension obligation bonds likely contributed to its 2012 bankruptcy, but many cities and states are pursuing the same strategy despite the risks. (AP)

In Kansas, officials are preparing to issue $1 billion in bonds to help fill the state’s nearly $9.5 billion pension funding hole and cushion its budget, which is expected to maintain only a small surplus.

The move—issuing pension obligation bonds to fund public employee retirements on the gamble that investment returns on the borrowed money will outpace the cost of paying back the loan—is one that many academics and analysts warn against.

But states and local governments continue to turn to the bonds as the unfunded portions of public pension systems balloon and they struggle to make annual payments to the systems. State retirement systems had a $968 billion shortfall between the benefits promised to workers and the funding available to meet those obligations in 2013, according to an assessment last month by The Pew Charitable Trusts. (Pew also funds Stateline.) That was a $54 billion increase from the year before.

In Pennsylvania, for instance, Democratic Gov. Tom Wolf has proposed selling $3 billion in obligation bonds to help cover a more than $50 billion unfunded liability in the retirement systems for state and public education employees. Lawmakers in Kentucky and Colorado also considered multibillion-dollar bonds sales this year before rejecting them.

Across the country, governments sold $670 million in pension bonds during the first half of this year. That’s more than double the amount raised during that period in 2014, according to data provided to ProPublica and The Washington Post by deal-trackers at Thomson Reuters.

Critics of the budgeting technique, such as Matt Fabian, a partner with Municipal Market Analytics, say the borrowing gives lawmakers the opportunity to meet their pension obligations without raising taxes or issuing difficult budget cuts, all while pushing off the real costs of funding retirement plans for their successors to deal with.

The bonds can make sense if governments continue to make the planned contributions to their pension systems, Fabian said, but the money is almost always used to create savings and facilitate a break from employer pension contributions.

“People like gimmicks,” he said. “It’s a budget gimmick with the math behind it that makes it seem more official.”

An analysis last month by ProPublica found that states using the bonds often pay less into their pension systems than they are supposed to, and even if the bond practice proves fruitful, pension systems can end up in worse shape than they were in when the bonds were issued.

“Your political horizon is relatively short term and these types of obligations are really long term in that you’re not just talking [about paying it off] over decades, but sometimes generations,” said Todd Ely, an assistant professor at the University of Colorado at Denver.

Proponents of the bonds argue that under the right conditions—low-interest rates and high investment returns—they can offer budget relief and savings. But, projections that lead to the decision to issue these bonds can be inaccurate, and a downturn in the stock market can put a government even deeper in the hole.

For example, experts can trace the 2012 bankruptcy of Stockton, California, in part to the city’s sale of $125 million in pension obligation bonds in 2007, as the economy spiraled into recession. Counting on the bonds to close a gap in retirement funds for city workers, the city was unable to meet its financial obligations when investment returns failed to manifest during the recession.

In many instances, the bonds can be viewed as a last resort method of funding retirement systems and often are more likely to be issued by governments with high debt levels, limited cash and large pension obligations. Detroit issued pension obligation bonds in 2005 and 2006 before it declared bankruptcy in 2013. 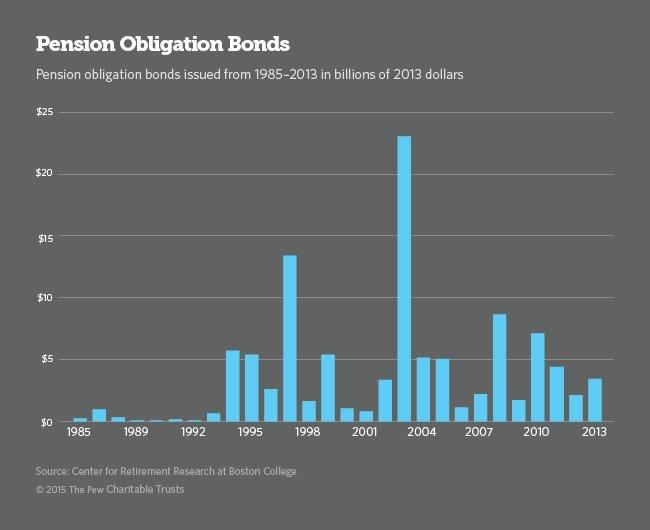 Kansas Senate Vice President Jeff King says borrowing is just one tool his state is using to address its unfunded liability and that legislation governing the imminent issue of bonds requires the state to continue to make its regular pension contributions.

The legislation also prevents the state from paying investors more than a 5 percent interest rate over the 30-year life of the bonds. According to its most recent report, the state retirement system has averaged annual earnings of 8.9 percent over the last 25 years—which, if past earnings hold into the future, would allow the system a net profit on the difference.

“We’re not just taking a problem and saying let’s bond our problem away,” said King, a Republican, who heads the committee that proposed the bond-enabling legislation. “If we make anything over 5 percent over the life of that bond investment, that investment will have been a wise decision.”

Fabian said risk exists, even for disciplined bond issuers. If an invested bond lost, say, 20 percent of its proceeds in a single year because of an economic downturn, he said, it would be extremely hard for a state to get back on track and access the expected proceeds.

“Any discipline is better than none,” Fabian said. “Anything they can do to ensure they can make the full employer contribution, the full [amount] as if the bond didn’t exist, those are all good.”

Kansas last issued pension obligation bonds, to support its public employees’ retirement system, in 2004, a move that King said has saved the state almost $200 million. However, the ProPublica analysis shows pension funding in Kansas got worse after the bond issuance, helping to increase the state’s unfunded liability from $4.7 billion to $8.3 billion as the government underfunded the pension following the bond sale.

Projections of how well pension obligation bonds will fare often depend on when the bonds are issued, according to the Center for Retirement Research at Boston College. At the end of 2007, when the stock market was peaking just before the Great Recession, the outlook for the bonds was rosy.

Fast forward to the middle of 2009, after the market crashed, and a majority of bonds analyzed by the center appeared to be a “net drain” on government revenue.

Even in extended bull markets like the current one, betting on significant investment returns is a shaky prospect, said Keith Brainard, research director for the National Association of State Retirement Administrators.

“There are a lot of people who believe that the equity market has gotten a bit long in the tooth,” he said. “And returns over the next 10 to 20 years might not be as high as predicted.”

While successfully issuing bonds is a guessing game for governments, which must wait years to find out if their investments pay off, the bankers who market them see an immediate payoff. They collect large up-front fees and are eager to sell the bonds, pointing to well-performing markets and low-interest rates as indicators of success.

Underwriting costs, and other fees financial houses collect, vary widely among the bonds; and the fees typically increase as the bond issuance grows, Ely said. In 2014, data compiled by Bloomberg showed underwriting fees were about $5.33 per $1,000 for municipal bonds, down from a peak of $6.90 in 2009.

While many bankers project positive returns on these bonds, given current interest rates and stock market outlooks, it’s impossible to know how well they will do until they’re paid off—10, 20 or 30 years down the road—said Roger Davis, a partner at Orrick, a California-based law firm that helped execute the first pension obligation bonds, in Oakland in 1985.

“Short-term effects tend to be significant losses in market crash situations,” he said. “But if you go out a number of years, that’s typically made up and you’re in the black again.”

Bonds Not a Big Deal

Though there is a steady issuance of pension obligation bonds, and low taxable interest rates could make them a good idea right now, Davis said, the bonds are not a “big theme of financing today.”

Pension obligation bonds became popular after the 1985 Oakland issuance. At that time, the bonds were tax-exempt, allowing cities and states to invest proceeds in high-yield securities to lock in guaranteed profits. The federal government put an end to the tax exemption with the Tax Reform Act of 1986. But bond issuances increased in the 1990s as stock market performance led governments to believe they could profit even under the taxable model, according to the research center.

Even with a 2003 spike in the amount of bonds issued, largely because of the $10 billion in bonds put forth by Illinois, the number of bonds issued in a given year has never been more than 1 percent of total assets in public pensions, according to the center.

Illinois continued to issue bonds after 2003. Eventually unable to make payments to the pension system or cover the cost of repaying the loans, the state raised its income tax by 67 percent in 2011 to cover these costs.