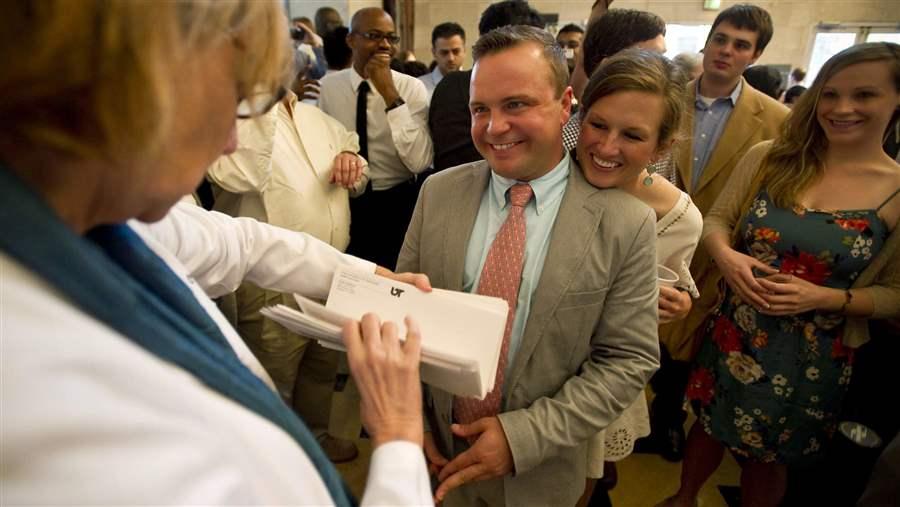 Fourth-year students at a Tennessee medical school wait for residency letters telling them where they will finish their medical training. Tennessee is one of several states with too few residency positions for the graduates of its medical schools. (AP)

This story has been updated.

Last year, 369 students graduated from Iowa medical schools, but at least 131 of them had to finish their training elsewhere because Iowa had only 238 residency positions available.

The story was the same for at least 186 students who graduated from Missouri medical schools and 200 who studied at Tennessee schools. States such as New York, California, Massachusetts and Pennsylvania were happy to take them—all four states took in more residents than students they trained.

Medical students have a strong interest in where they end up. But so do states. Many have a shortage of doctors, especially in primary care. And physicians who go to medical school and do their residency in a single state tend to stay. Sixty-eight percent of doctors who complete all their training in one state end up practicing there, according to the Association of American Medical Colleges (AAMC).

So while some states spend tens or hundreds of millions of dollars to support medical schools and build new ones, a handful are recognizing that it’s just as important to invest in residency programs—to increase the number of doctors practicing within their borders.

Before graduation, medical students interview with residency programs across the country, looking for a program in an appealing location that can train them to become a primary care doctor or a specialist in pediatrics, cardiology, oncology or other areas. Students rank the programs and the programs rank the students, and the National Resident Matching Program, the nonprofit in charge of placing most students, uses an algorithm to pair soon-to-graduate medical students with first-year residency slots.

Across the U.S., the number of medical students in each state tends to correspond to population, but there is a disproportionately large number in the Northeast, where medical education got its start in the late 1700s.

Since then, the rest of the country has been playing catch-up. There are now 175 medical schools spread across the U.S., but the number is growing. In 2007, AAMC encouraged states to increase the number of medical graduates by 30 percent by 2015.

But as many states have expanded the number of medical students they train, the growth in residency slots has proceeded at a slower pace, pushing many graduates to California and the Northeast, where there are extra slots.

Shelley Nuss, associate dean for graduate medical education (GME) at the Medical College of Georgia, said her institution has answered AAMC’s call to graduate larger classes. But that has created a bottleneck for in-state residencies. For a state looking to increase its doctor ranks, that’s a problem:  About half of the aspiring doctors who graduate from public Georgia medical schools end up practicing there, while 70 percent of Georgia medical school graduates who do their residencies in the state remain.

“Even if they all wanted to stay in Georgia, we didn’t have enough slots for that,” Nuss said. “If you want a return on investment with med students, you’ve got to keep them in-state and doing their residency in Georgia.”

Another problem, according to Nuss, is that two-thirds of Georgia’s residency slots are in urban areas, leaving fewer opportunities to expose residents to the state’s rural health care needs.

Creating more residency slots—which are funded largely by Medicare, the state, medical schools and hospitals—isn’t easy. Medicare, the federal health insurance program for the elderly, is the largest public source of revenue, helping to cover the roughly $150,000 a year AAMC estimates that it costs to train each resident. However, the Balanced Budget Act of 1997 caps the number of residencies Medicare can fund. That leaves hospitals and states to pick up the slack.

Most hospitals do not have residency programs. And many that want them often find they cannot get Medicare funding for them because they have inadvertently triggered the funding cap by having students come through for short training stints.

In Georgia, the state tried to get hospitals to start residency programs by helping with startup costs, allocating over $14 million to match any funds set aside by hospitals. Medicare funding doesn’t come until the residents do, so those matching funds allowed hospitals to start developing their programs. The Medical College of Georgia is also responsible for establishing residency programs. In seeking to increase the number of slots in the state, Nuss, the GME dean, focused on 11 hospitals in rural areas that had enough patients and faced the variety and severity of illnesses and injuries to provide well-rounded training.

Texas, which has increased its medical student population by 34 percent from fall 2002 to fall 2014, and where four new medical schools are expected to open within the next few years, has tried an approach similar to Georgia’s.

To encourage hospitals without residency programs to start them, Texas offered $150,000 planning grants to launch new residency programs, followed by another $250,000 to develop them. Hospitals that already had programs could apply for $65,000 grants to add slots, said Stacey Silverman, with the Texas Higher Education Coordinating Board. The state just allocated another $56 million to help continue expanding residency programs through 2018.

But Texas isn’t just hoping to retain the students it trains. It wants to become a resident importer: Silverman said the state wants 10 percent more residents than Texas medical school graduates and will seek to recruit them from out of state.

“It helps with indigent care because [residents] primarily treat those people,” she said. And when their residency is complete, she said, “those physicians will locate in and around the state.”

When states don’t have a coordinated effort to start new residency programs, medical schools are on their own to find a solution.

Five new medical schools have opened in Florida since the Medicare caps were put in place in 1997, and many say the number of residency slots doesn’t accommodate the new schools and the state’s population growth. The state’s Medicaid program for low-income residents will help with startup costs for some slots, but the funds don’t arrive until later in the development process and are only available for certain types of specialties.

Yolangel Hernandez Suarez, former associate dean for GME at Florida International University’s new medical school, said her quest for more residency slots took her to hospitals without any residents. She said she tried to convince hospital leaders that they should cover the startup costs because they would be training their own future doctors. “Physician recruitment isn’t easy, but residencies create a pipeline,” she said.

The Florida State University College of Medicine tried to get $3 million from the state to expand slots at existing programs but with added rotations in rural parts of the state like Immokalee, in South Florida, which has a large migrant farmworker population. The legislature approved the request, but Republican Gov. Rick Scott vetoed it.

More Than a Numbers Game

For states with doctor shortages, it’s not enough to just boost the number of residency slots. They have to be in the right specialties, and in the right places.

Joan Meek, associate dean for GME at FSU’s medical school, said Florida has added some slots, but few of them are for primary care—what the state needs most.

“We have all these new schools, but we don’t really have any new slots. The slots we do have are maldistributed, and that puts Florida at a disadvantage,” she said.

Deborah Hall, president of the American Medical Student Association, said many states suffer from a maldistribution of doctors more so than a shortage.

“You can’t guarantee that students will go to a certain place or treat a certain type of people,” Hall said, particularly when students saddled with debt may be drawn to lucrative specialties, whose residency programs are housed in big, often urban, hospital systems.

Rather than just look for hospitals to stash residents, Hall said, states, schools and hospitals need to take a thoughtful approach to getting residents exposed to treating underserved patients and the illnesses and complexities they have—whether in rural or urban areas.

Hall said doctors aren’t going to set up practices serving populations they haven’t gotten used to treating. “We need to give the training and experience that make them feel competent and confident to treat them.”