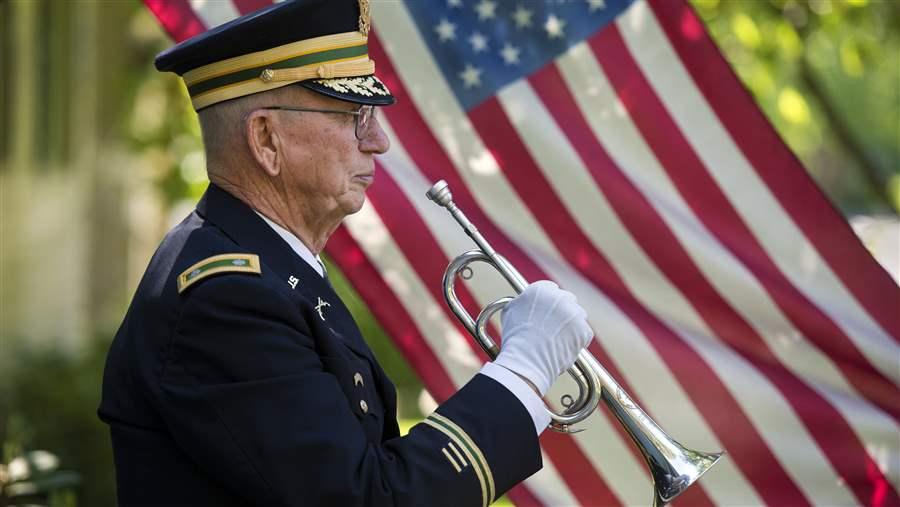 Maryland Republican Gov. Larry Hogan roared into office this year ready to cut taxes, including exempting all military pensions from the state’s income tax. Despite a budget deficit and having to compromise with a Democratic legislature, he succeeded in doubling the exemption to $10,000 in annual income.

Connecticut, also facing a budget shortfall, increased taxes on its wealthiest corporations but found room in the budget to get rid of its income tax on military retirement pay, joining 14 other states that do not tax the pensions.

Maryland and Connecticut are part of a growing competition among states wanting to attract and keep military retirees, who are some of the best-educated, best-trained and youngest retirees around. Active military members are generally eligible for retirement after 20 years of service. The majority then get civilian jobs, turning their military training into skills for the private sector. As a result, they pay income taxes, sales taxes on everything they buy, and possibly business taxes, boosting the economies of the states they live in.

Most veterans have lived in many places. Plenty of websites—with titles like Best Places for Military Retirees—can help them weigh the fiscal pros and cons of where they choose to live. While decisions on where to live might not be based only on tax rates, they’re a factor—and states know it.

Nine states have no income tax. Of the 41 that do, 14 of them—Alabama, Hawaii, Illinois, Iowa, Kansas, Louisiana, Massachusetts, Michigan, Mississippi, New Jersey, New York, Ohio, Pennsylvania and Wisconsin—exempt all military pensions from taxation, according to the National Conference of State Legislatures. Another 20 provide a partial exemption, as does the District of Columbia. Seven states—California, New Mexico, North Dakota, Rhode Island, Utah, Vermont and Virginia—provide no exemption.

“It’s a no-brainer,” said Rep. Bob Dettmer. The Republican chairman of the House Veterans Affairs Committee in Minnesota is fighting for tax-exempt military pensions. “Most of them [retired military vets] are in their 40s. They are going to buy homes, they are going to buy vehicles and buy groceries. They bring economic value to your state. The skills they have learned through 20-plus years in the military can be transferred into civilian jobs.”

“Exempting military pensions from tax is good politics—everyone loves veterans,” he said. “But it is not targeted [to low-income people]. Some veterans go on to make a lot of money in the private sector and end up pretty well off. There is no reason in the world to exempt their income from tax.”

Nationally, about 2.1 million military retirees are receiving pensions, according to the U.S. Department of Defense.

Competition Between the States

While veterans are represented in every state, some states attract more than others. Maryland, home to the U.S. Naval Academy and many defense contractors, is one of them.

Maryland had 54,641 military retirees in 2014, 51,195 of them got pensions, totaling $1.5 billion annually or about $29,140 a person, according to the Defense Department. Before the governor and the legislature acted this year, only the first $5,000 of military retirement pay was exempt from the state’s income tax.

Under the compromise reached with the legislature, the amount excluded from income tax doubled to $10,000—not nearly the exemption Hogan wanted, but one his spokeswoman Shareese DeLeaver-Churchill called a “first step in a longer process of eliminating taxes on all retirement income in Maryland.”

The state estimated the expanded exemption would cost $2.7 million in fiscal 2016 and about $3 million annually in subsequent years. Local taxes, which are tied to the state tax, would decrease by $2 million annually.

In Connecticut, Democratic Gov. Dannel Malloy and the legislature agreed to increase the exemption for military retirement pensions from 50 to 100 percent. That is estimated to cost the state’s treasury $10 million over the next two fiscal years. The loss will be more than covered by an increase in business taxes expected to bring in $1 billion.

Rep. Matthew Lesser, chairman of the General Assembly Banking Committee, called the tax cut for military veterans popular. The only opposition came from those who questioned whether the state could afford it. It also put the state in a better position to compete for veterans with its neighbors—Massachusetts fully exempts military pensions and New Hampshire has no income tax.

Rhode Island considered exempting military retirement pay, but instead chose to exempt Social Security payments for single recipients with up to $80,000 in adjusted gross income and $100,000 for joint filers, starting Jan. 1, 2016. The tax break will cost the state an estimated $9.3 million in revenue in fiscal 2017.

A Matter of Fairness?

Democratic House Speaker Nicholas Mattiello called the tax break for Rhode Island retirees an effort to create a “friendly environment for our residents” and a “matter of fairness,” because Maine and Massachusetts don’t tax Social Security benefits. (All but 13 states provide some tax relief for Social Security income.) A proposal to also exempt military retirement pay from taxation proved to be too much, he said.

In Minnesota, Dettmer’s effort to exempt military pensions from the income tax passed the Republican House this year but wasn’t approved in the Democratic Senate. He said Minnesota needs to provide the break to compete with its neighbors.

“The states that border us don’t have that tax,” he said, “and I know a lot of retired military live just across the river in Wisconsin—and they work in Minnesota.”