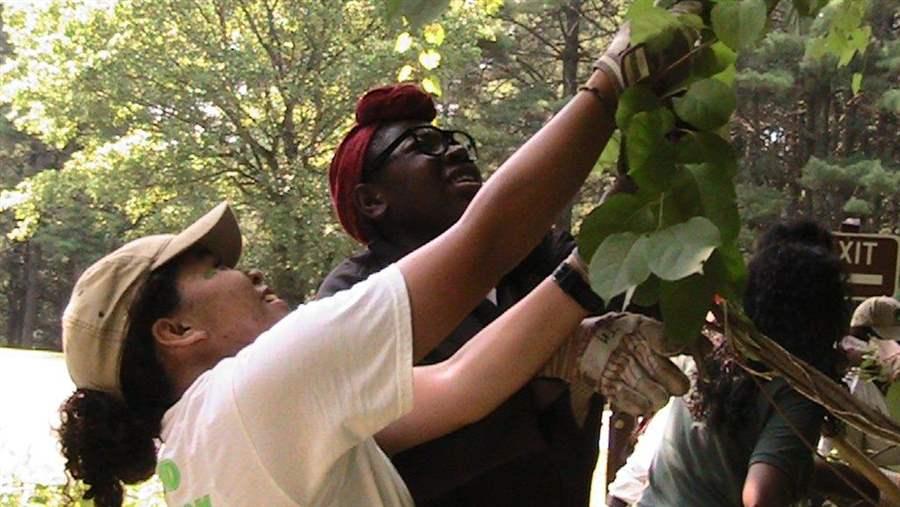 Catherin Quito, 17, left, and Joyce Mbakop, 18, remove invasive species from trees at Seneca Creek State Park in Maryland. Many state parks are trying to reach out to young people to get them interested in the outdoors. (Jenni Bergal/Stateline)

Some states are trying to get couch-potato kids to unplug from the digital world and plug in to the pleasures of stargazing, kayaking, studying insects and other outdoor pursuits in state parks.

States such as Maryland, Minnesota, New Mexico and North Carolina are sponsoring camping trips, running conservation programs or organizing outdoor classrooms where students can learn about wildlife and ecology. Thirteen governors have hosted campouts for youngsters and their families this summer in state or municipal parks, or on the grounds of the statehouse or governor’s residence, as part of Capital Campouts, a joint public-private program.

The goal is twofold: to encourage youth to be more active at a time childhood obesity rates are climbing, and to build younger Americans’ appreciation for nature, making it more likely they will support the parks and conservation for decades to come.

“Young people need to have a healthy lifestyle and truly experience the nature of the world and not some virtual reality through a gaming device,” said Lewis Ledford, executive director of the National Association of State Park Directors. “Smelling the fresh air, understanding the stars at night, knowing about the life cycles of ecology, this is important for the stewardship of future generations and is vital in conserving and protecting our natural resources.”

Although attendance at state parks is up, their budgets have been hit hard since the recession. Legislative funding for state parks has dropped about 10 percent nationwide over the last five years, according to the park directors group. Meanwhile, operating costs are up, from $2.23 billion in 2009 to $2.45 billion in 2014.

Many parks have been forced to cut staff or reduce hours or programming. Some have hiked entrance and camping fees or turned to private donors for help. Many now rely on additional funding sources, such as fees on motor vehicle licenses and special allocations from lotteries. Some states have hired teens to help with maintenance and improvements.

Across the U.S., there are more than 5,000 state parks and recreation areas, which have 221,000 campsites and 8,000 cabins. State parks departments also have responsibility over thousands of other areas, such as historical sites, environmental education centers, and fish and wildlife zones.

More than 700 million people visit state parks each year, Ledford says, and that number keeps growing. Two-thirds of them bring children. But parks officials say children who grow up in households that don’t visit parks as a family tradition are less likely to visit parks as adults.

“If our future leaders have no relationship to nature, no understanding of how clean air and clean water are produced and what a healthy environment is, they won’t have the knowledge, nor will they care about, doing anything about the stewardship of the earth,” said Nita Settina, superintendent for the Maryland Park Service. “That’s why we need to provide children with adventures and fun—so they become park visitors and will someday expose their children to those places.”

Maryland, Missouri, Virginia and other states have sought to attract teens to their parks by creating conservation job corps programs. Participants get paid to work on park improvements and maintenance and also experience nature firsthand, often for the first time.

Maryland has been running its jobs program for eight years. This summer, about 300 teens, working in teams, received the state minimum wage of $8.25 an hour to conserve and restore parks. They built trails, refurbished picnic pavilions, cleaned streams, planted trees and created butterfly gardens. They also spent part of their time canoeing, fishing and camping.

Most came from Baltimore or other urban areas and were unfamiliar with outdoor life.

At Seneca Creek State Park in Gaithersburg, Maryland, near Washington, 23 teens spent more than a month this summer working in the conservation corps. They built “pads” of gravel and crushed stone for picnic tables. They removed invasive species and weeds. On Fridays, they would go canoeing or fishing or learn archery. One weekend, they traveled more than 100 miles to Western Maryland for two nights of camping.

“I never pictured myself doing this stuff, and not having my phone, which I usually spend a lot of time on,” said Joyce Mbakop, 18, laughing as she struggled to pull off long vines of an invasive species wrapped around a tree on a steamy July morning. “It’s given me more appreciation for the outdoors. I want to plant flowers. I’m even making my mom recycle.”

Her crew mate Moneé Lancaster, 16, also said she never saw herself as much of an outdoors person. “I’ve never done kayaking, camping or swimming in lakes,” she said. “Now I’m outdoors doing stuff in nature; not hanging out at the mall with my friends. I think kids should get out and try this cause it’s a great experience.”

Although experts give many reasons for why kids are much less likely to play outdoors or be in touch with nature than they were decades ago, studies show that a big factor is that they’re hooked on technology.

Children spend an average of seven hours a day watching TV, using computers, phones and other electronic devices, according to the American Academy of Pediatrics. That means they’re less physically active, which could result in higher rates of obesity.

Over the past 30 years, obesity has more than doubled in younger children and quadrupled in adolescents, according to the Centers for Disease Control and Prevention. In 2012, more than a third of children and adolescents were overweight or obese.

That’s why state parks officials say it’s imperative that they provide programs that encourage youngsters to get outdoors and experience nature.

In Minnesota, for example, kids and parents can sign up for an overnight program: I Can Camp! They get hands-on instruction about setting up camp and starting a campfire.

In North Carolina, children and their grandparents can attend Grand Camp and sleep in a cabin for two nights and go hiking, fishing and canoeing.

In New Mexico, the parks department partners with the education department, local school districts and other agencies to run an outdoor classroom program. About 900 teachers have received training at state parks in such areas as testing water quality and identifying aquatic insects and birds.

The teachers then bring their students to the parks, transforming classroom lessons into hands-on experiences. About 166,000 students have participated in the program since it started in 2007.

“These places are very special,” said Christy Tafoya, the state parks director. “We’re trying to encourage people to recognize that and preserve them for the future. It’s part of our heritage here in New Mexico.”

New Mexico teachers and schools can apply for grants to pay for buses to take students to state parks for outdoor learning. The Kids ’n Parks initiative has doled out about $120,000 in transportation grants. It is funded by taxpayers who check off a box on their state income tax forms, opting to contribute a portion of their refund.

As part of the Capital Campouts program, Democratic Gov. Jack Markell of Delaware last month welcomed 10 families, most of them outdoor novices, who set up tents and camped overnight, fished and hiked at Brandywine Creek State Park in Wilmington. Naturalists put on a program that taught the campers about owls, crickets and tree frogs and they roasted s’mores by the campfire.

“You have a whole generation of kids who grew up on video games. People now are so connected to technology that they don’t put it down and don’t go outside,” said Ray Bivens, director of Delaware State Parks. “I think it’s incumbent on parks to have programs that teach kids outdoor skills. Being able to identify a couple of stars in the night sky, they just love it.”