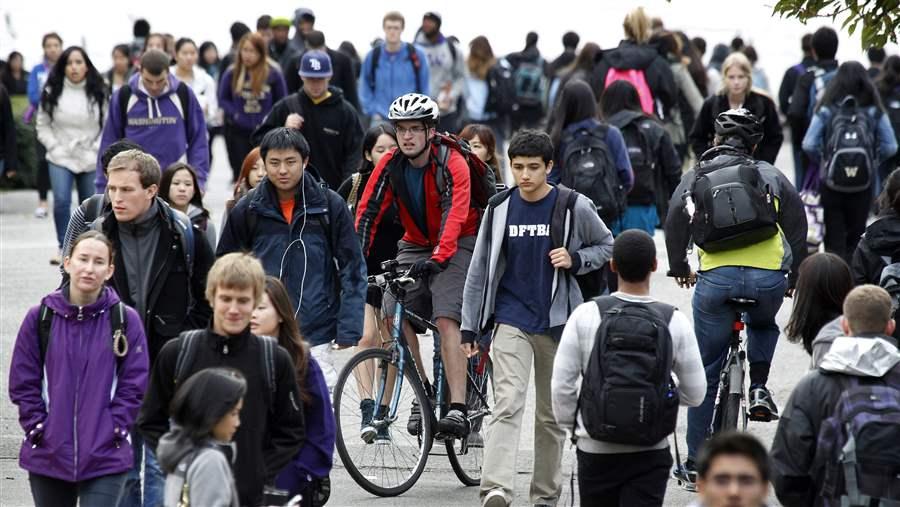 University of Washington students walk on the campus between classes. Washington has cut tuition at its colleges and universities over the next two years. (AP)

In July, Democratic Gov. Jay Inslee of Washington signed a bill that cut in-state tuition. You read that right: the state didn’t demand that tuition rise more slowly, or set a tuition freeze. It reduced the tuition four-year universities and two-year colleges will charge undergraduates over the next two academic years.

“I’m crying right now because I’m so happy,” University of Washington student Jessie Gamble told the school paper soon after the bill passed the legislature. She’s the first in her family to go to college, The Daily noted, and she’s working three jobs and taking out loans to pay for her degree. Right now, in-state tuition and fees come to $11,839 a year (that doesn’t include living expenses).

A growing number of states are trying to rein in the price students and their families pay to attend public colleges and universities. Tuition rose sharply during the Great Recession after states cut higher education funding. Now student loan debt is approaching $1 trillion nationally, and even upper-income families are worried about rising college costs. And legislatures are under pressure to bring prices down.

This year, Minnesota passed legislation that freezes tuition at two-year colleges this fall and will cut tuition next year. Ohio froze in-state tuition for two- and four-year institutions. Wisconsin froze in-state tuition across the 26 campuses in its university system. The University of Maine System, without the Maine Legislature’s prodding, kept tuition flat for the fourth year in a row.

But there’s no easy solution to the problem of rising sticker prices. Washington is promising to replace every lost dollar of tuition revenue with state money. Wisconsin, meanwhile, is forcing schools to become more efficient by simultaneously cutting funding and imposing a tuition freeze.

It’s not likely that states will return to subsidizing colleges the way they did a generation ago. Most states are spending less per student today than they were before the recession. A long-term solution to rising tuition wouldn’t just involve public investment, or innovation. It would involve a change in the way families behave, says David Strauss, a principal at Art & Science Group, a Baltimore-based consulting firm. His company advises colleges on questions like how to set tuition.

Although families are concerned about the cost of college, they’re not migrating toward lower-cost institutions that offer fewer amenities. “The marketplace hasn’t yet caught up with the rhetoric,” Strauss said. 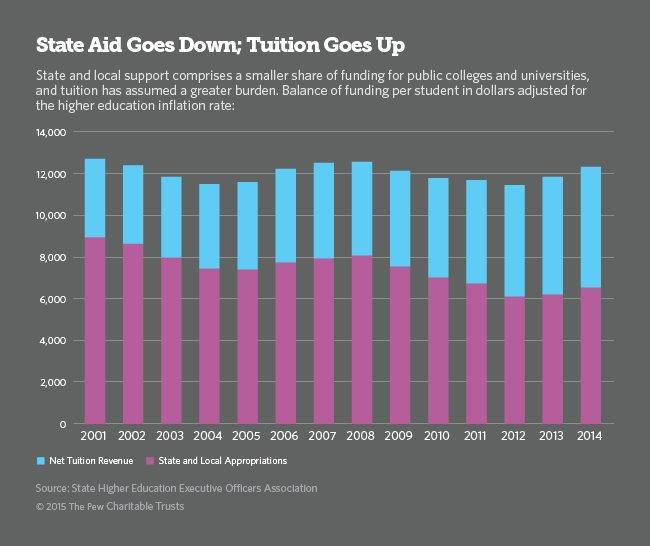 Shifting Costs Back to the State

Washington state Sen. John Braun holds three degrees: a bachelor’s from UW and two master’s from the University of Michigan. “When I was at the University of Washington in the 1980s, you could work during the summer and part-time and you could put yourself through school. You can’t do that today,” he said.

Nationwide, state funding has been receding from state university budgets for decades. But the recession forced a dramatic shift. In Washington, the state made huge spending cuts—UW’s state funding dropped by nearly 50 percent from 2009 to 2012—and allowed universities to raise tuition to make up the difference.

“It’s like an equation,” said Norm Arkans, a spokesman for UW. Falling state funding puts pressure on tuition to rise, and vice versa.

According to Arkans, two decades ago the state covered about 80 percent of the costs of UW’s educational program and tuition covered 20 percent. By about 2012 the balance had shifted, with the state covering 30 percent and families covering 70 percent.

Braun, a Republican, started working with his colleagues on a plan to restrain tuition growth two years ago. The state has a generous financial aid program that targets low-income students, he said, but college had become unaffordable for the middle- and upper-middle class.

Braun is concerned that students’ reliance on loans to pay for college will hinder their economic mobility and hurt the state economy. Student debt can affect where graduates can afford to live, the jobs they take, and how soon they’re able to make investments like buying a home, he said. In 2013, graduates of UW, Seattle, who had debt owed on average $21,263, according to The Institute for College Access and Success.

“It can grow in the future, but it grows relative to what a student can go out and earn,” Braun said.

Crucially, lawmakers agreed to make up lost tuition revenue with state funding. Nobody expects a return to the balance of revenue that supported colleges in the 1980s, with the state footing almost all the bill. But Braun believes lawmakers must take funding higher education seriously. “You don’t want to provide access but then reduce the quality of the education you get,” he said.

Some argue that the relationship between state funding and public university tuition isn’t as clear cut as Arkans’ assertion that it works like an equation. “If tuition only increased to offset reductions in state support, we would expect to see decreases in tuition when state funding cuts (in constant dollars per full-time student) are restored,” said a study by the State Higher Education Executive Officers, an association that monitors higher education finance. The study looked at data through fiscal 2014.

Public colleges and universities are actually pulling in 7.5 percent more money per student from state funding and tuition, in constant dollars, than in 1989, the study found. Which brings us back to Wisconsin’s budget: By constraining university funding, the state wants to force institutions to control their costs.

One theory for the rising cost of college holds that the more revenue universities get, the more money they’ll spend—increasing their costs over the long term, as investments in new faculty and science labs need to be maintained.

Universities have been spending money on things that may not improve the quality of the education they provide, says Robert Martin, a retired economics professor who studied higher education extensively at Centre College in Kentucky. Think extra administrative staff and amenities like rock-climbing walls.

Programs can be hard for universities to cut because they’re governed by a sometimes fractious mix of faculty, administrators and boards of trustees. “It’s likely that the only way to get control of college and university costs is for outside agencies to force them to start to control costs,” Martin said. Earlier this summer, a study found that tuition is more likely to rise when individual institutions have power to raise it (as opposed to, say, when state legislatures wield that authority).

Technology could also help address the problem, Martin thinks, by creating a lower-cost alternative to a traditional university. Walker thinks so, too: that’s why he worked with the University of Wisconsin System to create the UW Flexible Option, which allows students to work toward an online degree at their own pace.

The University of Wisconsin at Madison will save money by cutting funding to its educational programs this year, plus redirecting funding from other activities into education, Chancellor Rebecca Blank wrote on her blog in April without detailing the cuts. But the state flagship will also be raising tuition for out-of-state and graduate students.

“When you look at public attitudes about the cost of college, they use words like ‘outrageous,’ ” said Strauss, the tuition consultant.

But frustration isn’t changing behavior, he said. Students and families gravitate toward institutions that promise one-on-one attention. They gravitate toward roomy dorms and pleasant dining halls, and demand resources such as mental health services.

“These families want things that cost money. And my view is you’re not going to see a major shift in this until … a significant, critical mass of families starts to say, ‘I’m willing to take less for paying less.’ And we’re not seeing that yet,” Strauss said.

Of students who participate in a poll Strauss’ firm conducts with the ACT, a nonprofit that administers college admissions tests, three-quarters say cost will have at least some influence on college choice. But they’re still enrolling in the same institutions that similar students enrolled in years ago—they’re not turning down Harvard University for a lower-cost public institution.

Higher limits for federal student loans over the past decade help middle- and upper-middle-class families keep financing increasingly expensive degrees. And easy credit has, in turn, made it easier for colleges to raise tuition, researchers at the Federal Reserve Bank of New York recently calculated.

But families who’ll do whatever it takes to pay for a brand-name institution aren’t the only market for higher education.

There’s a second group that tends to weigh price more heavily in college choices: low-income students, students who are the first in their families to go to college, and adults who want to quickly earn a credential that will lead to a better job. These students are set to make up a greater share of the college-going population as demographics change.

There are already low-cost, utilitarian institutions that serve this market. President Barack Obama and many education reformers say that community colleges can provide a cheaper, more accessible substitute for the first two years toward a bachelor’s degree—and quality, career-focused two-year degrees.

But “it’s not entirely clear that that experience is a successful answer to the question,” Strauss said. Graduation rates at community colleges are notoriously low. Just 20 percent of first-time college students who enrolled full time in a public two-year college in 2010 graduated from that institution within three years, according to the Department of Education.

And college dreams are hard to shake. Just think of the UW student, Jessie Gamble, who’s willing to work three jobs and take out loans to go to a nationally ranked university.