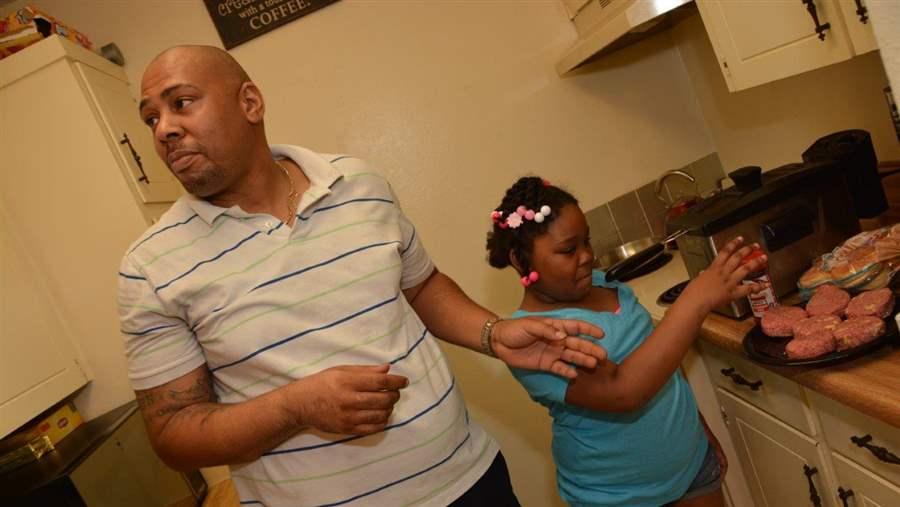 Johnny Waller Jr. cooks lunch with his 8-year-old daughter, Alexandria, in his apartment in Kansas City, Missouri. Because of his felony drug conviction, Waller was barred from receiving food stamps when he was out of work caring for his son Jordyn, who had cancer. (Brian Turner)

This story has been updated throughout.

Johnny Waller Jr.’s 1998 felony drug conviction has haunted him since the day he left a Nebraska prison in 2001.

Waller, now 38, applied for 175 jobs without getting one. He had trouble getting a federal loan for college because of his drug conviction, so he started his own janitorial business, in Kansas City, Missouri. And when his toddler son, Jordyn, was diagnosed with stomach cancer and needed full-time care, Waller’s record disqualified him from receiving food stamps.

“I really needed assistance there,” Waller said of the time in 2007 he had to give up his job to care for Jordyn. But he couldn’t get it, he said, because of a conviction “when I was 18 years old that didn’t have anything to do with my son.”

Hundreds of thousands of Americans are serving time for drug offenses—nearly a half-million according to the latest numbers available, from 2013. For many like Waller, leaving prison with a felony conviction on their record adds to the hurdles they face re-entering society. A 1996 federal law blocks felons with drug convictions from receiving welfare or food stamps unless states choose to waive the restrictions.

The bans, which don’t apply to convictions for any other crimes, were put in place as part of a sweeping reform of the nation’s welfare system, and at the height of the war on drugs. Now many states are rethinking how to help felons become productive citizens and reduce the likelihood they will return to prison.

Since 1996, 18 states have lifted restrictions on food stamps, known as the Supplemental Nutrition Assistance Program, and 25 allow people with certain types of drug felonies to get those benefits—leaving seven states where a felony drug record disqualifies a person from receiving them.

States have been more restrictive when it comes to extending welfare benefits through Temporary Assistance to Needy Families: 14 have lifted the restriction, 23 have some restrictions and 13 have full restrictions barring felons with a drug conviction from receiving cash assistance.

Marc Mauer, executive director of The Sentencing Project, which advocates reforming the laws, said banning people from getting food stamps runs contrary to policies designed to ease inmates’ re-entry to society and to curb recidivism.

“This increases the odds they will commit new crimes by virtue of the fact that you’re creating a significant financial obstacle,” Mauer said. 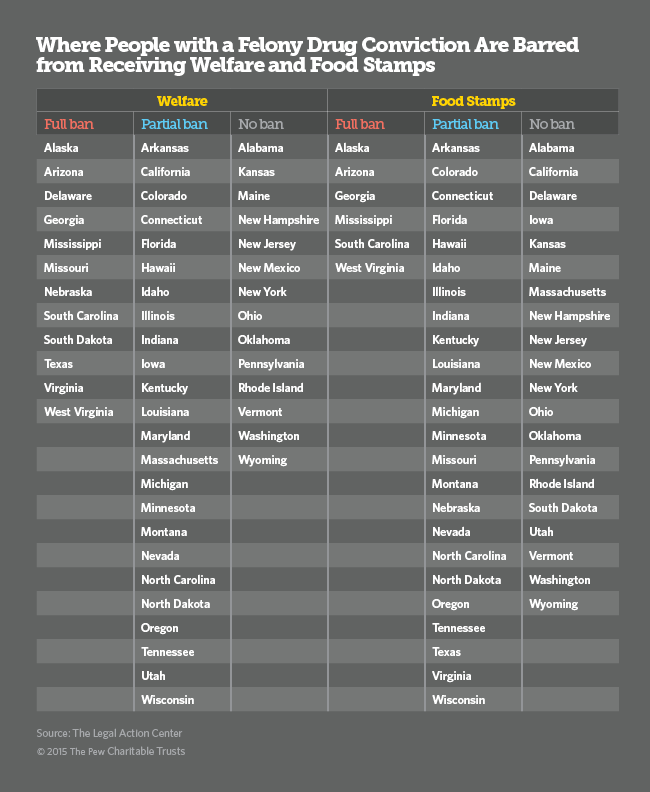 “If we want people to stay out of trouble we’ve got to give them a hand up, not a foot down,” said state Rep. Senfronia Thompson, a Democrat who pushed for the repeal in Texas. She said providing help is much less expensive for the state than paying for repeated incarcerations.

While Texas’ food stamp program is now open to anyone convicted of using or selling drugs, those who violate their probation or parole are ineligible for benefits for two years. If they are convicted of another felony, drug-related or otherwise, they are barred for life.

Alabama scrapped its ban for food stamps and cash assistance.

Carol Gundlach, a policy analyst for Alabama Arise, which lobbied in favor of the change, said it is especially important for formerly incarcerated mothers, who often struggle to feed their families when they return home.

But even as many states have scaled back their bans, others have considered re-establishing them.

A Pennsylvania bill would deny welfare benefits to anyone who served more than 10 years for a drug offense. State Rep. Mike Regan, the Republican sponsor of the bill, said it would target major drug dealers and save finite state resources for those who are more deserving of help. Regan, a retired U.S. Marshal, said that during his time in law enforcement he saw many dealers who were receiving food stamps. He sees his measure as a deterrent and a way to curb abuse of the system.

While states can make changes to welfare and food stamp policy, it’s up to the federal government to remove the stumbling blocks that released drug felons face in receiving education and housing assistance.

All current inmates also are ineligible for federal Pell Grants (which are for lower-income people and do not have to be repaid) to help pay for college courses while they are in prison. However, U.S. Education Secretary Arne Duncan said this week that the Obama administration wants to change that, and will propose a pilot program that would allow prisoners to access nearly $6,000 a year.

The department has encouraged local housing authorities to consider how long it has been since the conviction and whether applicants have gone through drug treatment programs when weighing public housing applications from felons. But local housing authorities have wide discretion in whether to accept someone with a record, particularly when there has been a pattern of drug use.

Felons also face discrimination in seeking housing on the open market, though some states are moving to ease that, too.

In Texas, for instance, the legislature this year passed a law that gives landlords liability protection from negligence suits for knowingly renting to convicts who commit crimes in their apartments.

Texas Rep. Thompson said the law gives landlords peace of mind while helping ease discrimination on anyone who has returned from prison, whether they were recently released or they are looking for housing years later.

'Too Late' for Jordyn

Waller has experienced all of these roadblocks at one time or another since leaving prison. And changes in the laws often came too late to help him.

Initially unable to finance school or get a job, Waller moved in with his mother in Kansas City, though his presence was tough on her financially. She asked him to apply for food stamps to help out, but the food stamp office told Waller he’d be denied.

Waller said the restrictions put him on the brink of a breakdown, and he considered whether he might be better off returning to prison, which was a world that made sense to him. Then he had Jordyn, and he decided he was done with crime and prison.

“I’d been a gang member, I’d been shot in the head, and I’d gone to prison. There wasn’t anything else out of that lifestyle to get,” he said.

So over the next few years, he started his own janitorial service and eventually hired seven people. He made good money, drove a nice car and felt like he had gotten his life together.

But in 2007, he learned Jordyn, then two-and-a-half, had stomach cancer, which required multiple rounds of chemotherapy and then round-the-clock care. Jordyn was initially treated in Kansas City, but Waller thought Jordyn’s chances would be better at St. Jude’s Children’s Research Hospital in Memphis, Tennessee.

So the single father closed his business, packed his car and headed to Memphis. But with no income, Waller soon ran through his savings. His bills piled up and his car was repossessed. He needed help with food, as doctors required him to make fresh food for Jordyn every meal to avoid bacteria. But his past kept him ineligible for food stamps both in Tennessee and Missouri, where Waller and his son eventually returned.

Missouri changed its law last year to allow people like Waller to qualify for food stamps as long as they complete a treatment program or prove their sobriety with a urine test, which they have to pay for.

Missouri’s change of heart didn’t come soon enough for Jordyn, however. He died in 2008 while waiting for a bone marrow transplant, just days before his fourth birthday.

Since burying his son, Waller has continued to raise his other two children—daughter Alexandria, 8, and son Kendall, 7—on his own. It hasn’t been easy, but he’s slowly made progress.

After returning to Kansas City from Memphis, he moved in with his mother because his criminal record kept him from renting an apartment, though he tried several times. After Waller had lived six years with his mother, her building’s landlord gave Waller a trial run, giving him a short lease on another unit. This year, he was finally able to sign a yearlong lease.

Once federal education finance laws changed, Waller enrolled at Rockhurst University in Kansas City and earned a bachelor’s degree in business management. In 2011 he was pardoned for his drug crime by former Republican Gov. Dave Heineman of Nebraska, which helped him get a job with a medical equipment company that doesn’t review pardoned crimes as part of its background check.

But Waller said he’s gotten used to watching others go through life without the same barriers, and he has learned to accept there are some things he’ll never be able to do.

“I want to change apartments to a nicer place in a better school district,” he said. “I live on the fringe of just being able to live a normal life. I’m right up against the glass.”