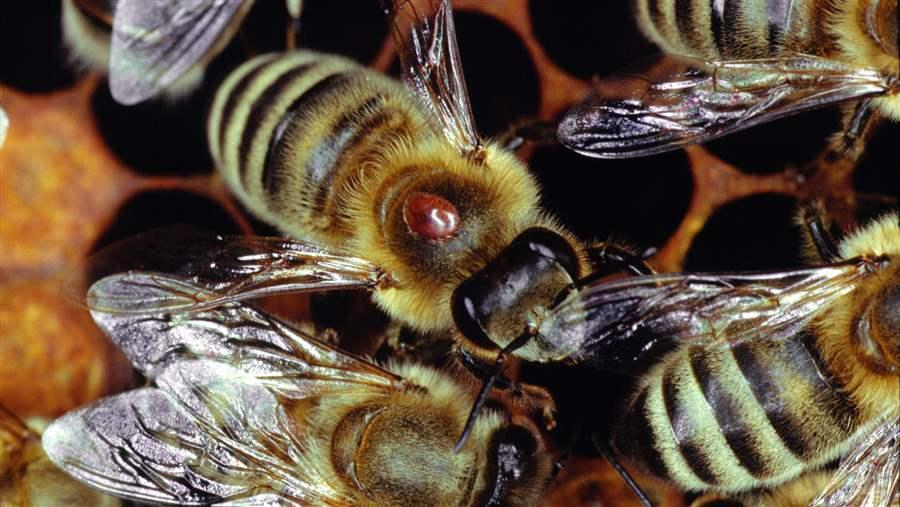 A Varroa mite feeds on a honeybee. Varroa mites, thought to be a cause of the decline in the bee population, suck a blood-like substance from honeybees, leading to disease and deformities. (AP)

The orange groves in Fort Myers, Florida, have turned to poison for David Mendes’ honeybees. The onetime winter havens for bees have been treated with a popular pesticide that he says kills his livelihood.

States and the federal government are searching for ways to protect managed bees like Mendes’ and their wild counterparts. The White House issued a strategy in May to promote the health of honeybees and at least 24 states have enacted laws to protect bees and other pollinators such as bats, birds and butterflies.

Of the 100 crops that supply about 90 percent of the food for most of the world, 71 are pollinated by bees. Pollination has a direct effect on the quality of food and the diversity of crops. Declines in bee populations mean fruit and vegetables are less available and more expensive.

Though the number of honeybee colonies managed by beekeepers appears to be on the rise for the first time since “colony collapse disorder” was identified in 2006, U.S. bee populations have not returned to what they had been before a devastating parasite appeared in the late 1980s, causing the loss of up to 70 percent of managed bee colonies.

Advocates hope they can stem future colony losses by addressing pesticide use and protecting habitats. But states have yet to prohibit neonicotinoids, or neonics, pesticides used on agricultural crops, which scientists and many beekeepers say are killing bee species both native and farmed.

It is less clear just how broadly native populations of bees are affected by pesticides and habitat loss.

Mendes, one the largest beekeepers in the country, has kept as many as 20,000 hives of bees for almost 40 years. He said it is typical for roughly 10 to 15 percent of a colony to perish during the winter months, but now the annual loss of some colonies is more than half.

The decline in honeybees, which were first imported by European settlers, has contributed to the increased cost of honey and of food in general, as beekeepers are forced to continually buy more bees to replenish their hives.

Large-scale farmers and chemical companies point to the relative safety of neonics. Introduced in the 1990s as a low-level toxin to deter crop-damaging pests, neonics work by attacking the nervous system.

Chemical companies say neonics, which can be sprayed on plants, used to coat seeds before they germinate or applied directly to soil, are safer than older pesticides. They dispute research showing the chemical can be toxic to bees, saying it relies on overexposing laboratory bees to the chemicals.

But Mendes is confident the chemicals have an impact on his bees as he moves them around the country to pollinate crops.

Finding safe places to raise bees has gotten more difficult, he said. Keeping his hives next to crops like citrus or watermelons mean the colonies “just won’t thrive.”

Others agree. The chemicals can affect an entire colony, making it difficult for bees to return to the hive, and cause reproductive problems and other long-term ailments, said Rikki Seguin, state director for the advocacy group Environment Oregon.

Oregon has been on the forefront of targeting neonics’ use in the U.S. In 2014, the Eugene City Council banned their use on city property, the first ban of its kind in the country. The Portland City Council followed suit in 2015, but the Oregon Legislature failed to advance a similar proposal this year.

“If we’re eliminating the species that is responsible for pollinating these crops, we should be alarmed about our food security and our food future,” Seguin said. “For us, it’s a ban, it’s very simple that banning the neonics is the single best thing we can do to stem the loss of our pollinators.”

Across the country, 18 bills in 10 states were introduced this year regarding neonics, including measures to ban or limit their use. None passed, though some are still pending before legislatures with multiyear sessions.

While some advocacy groups are eager to push for state bans on neonics, Vicki Wojcik, research director for the San Francisco-based nonprofit Pollinator Partnership, said the science showing a connection between neonics and bee death in real hives is not strong. Her group does not promote outright chemical bans but advocates reduced use of chemicals overall.

Banning neonics would just lead farmers to seek other, potentially more damaging chemicals to protect their crops, she said.

“Would removing one product from the list of 200 products people are using in agriculture make a significant difference?” Wojcik said. “It probably won’t. People will use something else.”

This year in Maryland, an attempt to require the labeling of seeds and plants treated with neonics, and to limit who can use the chemical, was met with opposition from the state Department of Agriculture and the nonprofit Maryland Farm Bureau.

Ferguson said bees only suffer significantly from neonics when exposed to large quantities.

“The bees maybe get a slight exposure to it,” he said. “They’ll be OK. They can tolerate it because it’s at such a low level.”

Ferguson said the Maryland measure did not address the real causes of bee death: largely starvation during recent winters, which have been excessively cold, and lack of habitat.

“It was too narrow,” Ferguson said of the bill. “It was not really going to address the problem they were trying to fix in the state of Maryland, which is bees dying.”

Mendes, who recently sold his bee operation to Paramount Farming, an almond and pistachio producer, said his anecdotal evidence is enough to identify neonics as problematic.

“Companies will argue that it’s not at a toxic level, but what the observant beekeepers are seeing is that if you’re next to certain agricultural crops, your bees are always sick,” Mendes said. 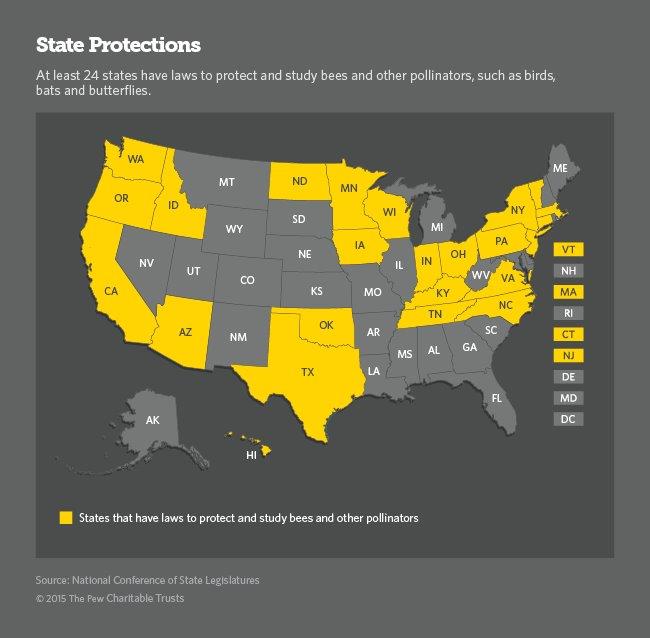 Ferguson said that eliminating the use of the pesticides would not save bee populations in Maryland, because they would still be sickened by the Varroa mite, a parasite that causes disease and deformities in honeybees by sucking a substance similar to blood from the invertebrates.

“It would be like if you took a parasite the size of a softball and stuck it to the back of your neck and had to carry it around all of your life and let it suck the blood out of you,” he said. “That is a mean, mean parasite that we need to get addressed.”

The mites, which are not a threat to native bee populations and first appeared here in the late 1980s, require regular treatment to stem their spread, said Karen Rennich, project manager at the Bee Informed Partnership, a collaboration of research labs and universities trying to better understand honeybee decline.

“You have to treat, so that’s time and money,” Rennich said. “The treatments aren’t free, the commercial guys are doing it from four to six times a year, there’s a lot of cost associated with treating.”

The research group works with beekeepers from around the country to determine how many bees are lost each year. Based on preliminary results, the group finds that about 23.1 percent of colonies kept in the U.S. were lost last winter. For the second year, losses were below the nine-year average, 28.7 percent.

Annual colony loss varies across the country. Oklahoma and Illinois lost nearly two-thirds of their colonies from April 2014 to April 2015, while Hawaii lost only 14 percent.

Ruth Berlin, executive director for the Maryland Pesticide Education Network, a coalition of health care, religious and other organizations that supported the Maryland proposal, said that with a more than 60 percent decline of bee populations in her state, beekeepers project their colonies could be completely gone in five years.

There is much less data available regarding how many native bees are lost each year, said Sam Droege, a wildlife biologist with the U.S. Geological Survey.

Scientists are still working to identify all of the country’s native bee species and how they interact with different plants, he said.

“It gets complicated because there are 4,000 species and they do 4,000 different things,” Droege said.  “The basic issue is they are really in sync with native plants, they evolved together. You can’t just plant a bunch of freaking clover and save the native bees.”

Many native bees are “specialists,” Droege said, and need location-specific plants to survive. Many ornamental plants don’t help wild bees because they are often devoid of pollen and nectar. Others, like plants sold in big box stores, are often treated with neonics, he said.

He also points to the expansion of the ethanol industry as harmful to native bees. Cornfields are pollinated by wind, not bees. As corn replaces native crops, bees see their habitat decline.