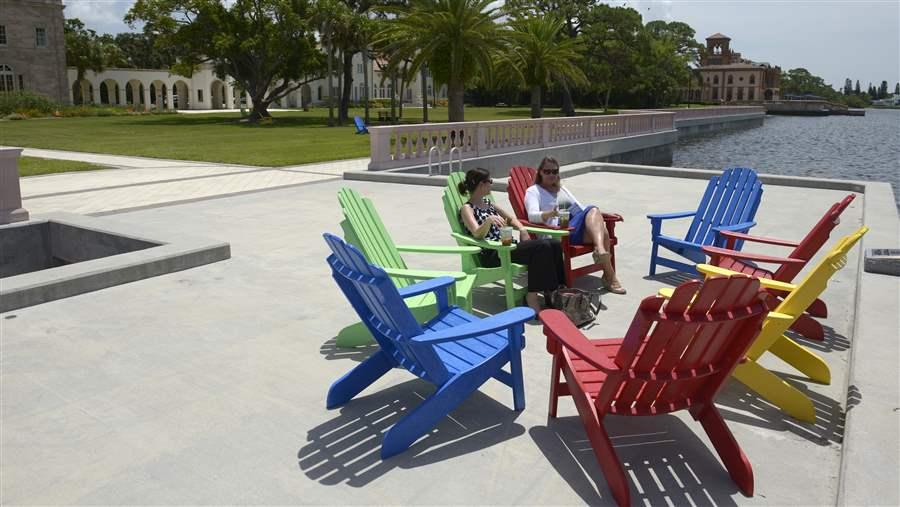 New College of Florida, a liberal arts school, must demonstrate it is graduating students on time and helping them find jobs or risk losing some state dollars. Florida is one of 26 states that now apply performance-based funding formulas to their colleges and universities. (AP)

New College of Florida doesn’t offer pre-professional degrees, like nursing or engineering. Students choose the public liberal arts college because they want an intellectual experience. Many take a year off after graduation to pursue research or community service.

Yet last fall, New College opened a flashy new career center on its Sarasota campus. It needed to prove to the state that it was helping students find jobs and graduate on time, or risk losing $1.1 million in state aid. “That’s a big deal for us,” David Gulliver, media relations coordinator for New College, said of the money.

This fiscal year, Florida was one of 26 states to fund their two- or four-year college systems (or both) partly based on outcomes such as graduation rates, according to HCM Strategists, a consulting firm. Mississippi, Nevada, North Dakota, Ohio and Tennessee all spent over half their higher education budgets that way.

The idea of using outcomes—not enrollments—to guide public funding of higher education has so much bipartisan backing that both President Barack Obama and Florida’s Republican Gov. Rick Scott support it. Just last week, the Florida Board of Education approved a performance-funding system for state colleges, adding to its existing system for state universities.

It’s too early to say whether performance-based funding will drive the changes lawmakers want. But the policy so aligns with national concerns about the cost and payoff of a college education that it’s likely here to stay.

Tennessee started giving state colleges and universities bonus payments for meeting goals in certain categories, such as student performance on national exams, in 1979. In the 1990s, a handful of states set aside a small percent of funding to reward outcomes, such as degree completion. Those programs typically didn’t last long.

Then the Great Recession happened. As the economy tanked, so did state tax revenue. Almost every state cut higher education funding between 2009 and 2014, and many colleges and universities raised tuition to compensate.

College became less affordable even as Obama and governors emphasized how important it was for Americans to go. “Education is an economic issue when nearly eight in 10 new jobs will require workforce training or a higher education by the end of the decade,” Obama said in 2010.

To get the economic benefit of a college degree, the president emphasized, students have to graduate. Fifty-nine percent of first-time college students, studying full time, who started a bachelor’s degree program in 2007 graduated in six years from that institution, according to federal statistics.

The Lumina Foundation and the Bill and Melinda Gates Foundation have added to the sense of urgency over the past few years by spending millions of dollars on developing and promoting strategies for raising graduation rates. One strategy is performance-based funding, also known as outcomes-based funding.

The men and women who oversee Florida’s 12 state universities started developing a performance funding model in 2012. “We knew we needed to come up with a different approach to get additional state support [for state universities],” said Tim Jones, a vice chancellor for the Florida State University System Board of Governors.

The Florida Legislature wanted more accountability for money spent on higher education. Both lawmakers and the board wanted to push colleges to become more efficient.

Here’s the formula they came up with: Starting in 2014, a small portion of every university’s base funding—plus any additional state money—has to be distributed according to the university’s performance on 10 metrics. Metrics include the average wages of graduates, the six-year graduation rate, the second-year retention rate and the share of undergraduates who come from families with incomes low enough to qualify for a federal Pell Grant. In 2012-13, the vast majority of Pell Grant recipients had a family income of $40,000 a year or less, according to an analysis of federal data by the nonprofit College Board.

Universities are scored between 0 and 5 points on each metric, once based on performance and again based on improvement. The board takes the higher of the two numbers for each metric and adds them up. If the university scores less than 25 points overall, it risks losing the performance portion of its base funding. If it scores above, it’s eligible to get new money. The three institutions with the highest scores get additional funds.

Other states have put much more money at stake and have built much more comprehensive formulas. While performance-based funding made up 8.8 percent of Florida’s spending on state universities this year, Tennessee allocates almost 100 percent of its higher education funding—for both community colleges and universities—through an outcomes-based formula.

“For every degree you award, it counts. For every student that accumulates 12 hours, they count. And we just simply count those up, and those are your outcomes for that funding year,” said Crystal Collins, a director at the Tennessee Higher Education Commission. “You don’t have to perform at a higher rate than you did last year; you just have to perform.”

The formula involves multiple calculations (you can check them out on the commission’s website). But basically, the state decides how much it wants to spend on higher education and parcels the money based on certain factors. A big one is whether students are progressing and graduating.

Tennessee’s model also takes into account basic operating costs and adjusts its formula based on each institution’s mission. Research universities are rewarded for spending money on research, for example, while community colleges are rewarded for connecting students with jobs.

So is performance funding making a difference? “Yes—incredibly, actually,” said Joe DiPietro, the president of the University of Tennessee. The university system has beefed up academic advising and started stressing that students take a full course load each semester, he said.

Graduation rates have risen across the university system since the outcomes-based formula was implemented in 2010. And they’re improving across the state, Collins said.

Yet researchers say it’s unclear whether performance funding is pushing up graduation rates. “We do not have as yet conclusive evidence that performance funding does indeed improve student outcomes in any significant way,” Columbia University researchers wrote last year in a working paper that reviewed models in Indiana, Ohio and Tennessee.

More statistical analysis needs to be done before researchers can disentangle performance funding from everything else that affects colleges. Decisions made by presidents and faculty, requests by accrediting agencies, grants from foundations or the federal government and public pressure can all push colleges to change. Other factors affect whether students graduate in two or four years, such as the availability of financial aid.

So far, studies haven’t found a strong link between performance funding and graduation rates. A recent analysis of Washington state’s model for community colleges found that it hadn’t much affected retention or the number of associate’s degrees awarded. Institutions were awarding more short-term certificates, credentials that don’t always have much labor market value.

The results suggest, the researchers wrote, that it may be more difficult for institutions to retain students from year to year than the designers of Washington’s formula thought.

Kevin Dougherty, the lead author of the Columbia working paper, thinks states should pay more attention to what he calls “the issue of creaming.” An easy way for colleges to improve their metrics is to raise admissions standards, potentially pushing out disadvantaged students.

About 30 percent of administrators interviewed by Dougherty and his fellow researchers for the study said restricting admissions was already happening or could happen. Colleges can also game performance-funding systems by shifting recruitment to better-prepared students, including from out of state, or by making it easier to pass classes, the administrators said.

States such as Tennessee try to address this concern by weighting the success of low-income students and other subpopulations more heavily in their formulas. “We don’t have a clear idea of how well that works,” Dougherty said.

Sean Tierney, a strategy officer for the Lumina Foundation, says the states’ growing shift to tuition to fund higher education—which rises with enrollment—strengthens the case for rewarding outcomes. “It makes more and more sense for the state to fund on a different variable, in order to help these students,” he said.

In a different world, you might imagine policymakers figuring out how much it would cost to raise graduation rates by a certain amount and fund institutions that way, says Robert Bradley, a professor at the Institute for Academic Leadership hosted by Florida State University.

Instead, performance-funding formulas take the money states want to spend and divvy it up based on productivity. And that’s exactly how lawmakers like it.

“The fact that we’ve gotten $220 million over the past two years, three years, shows the belief that our policymakers and the legislature and the governor’s office have in what the board is doing,” Florida’s Jones, the CFO, said of his state’s formula. “It’s very likely that we wouldn’t have gotten the money without this model. So I think folks are happy, because they are getting funding for this.”