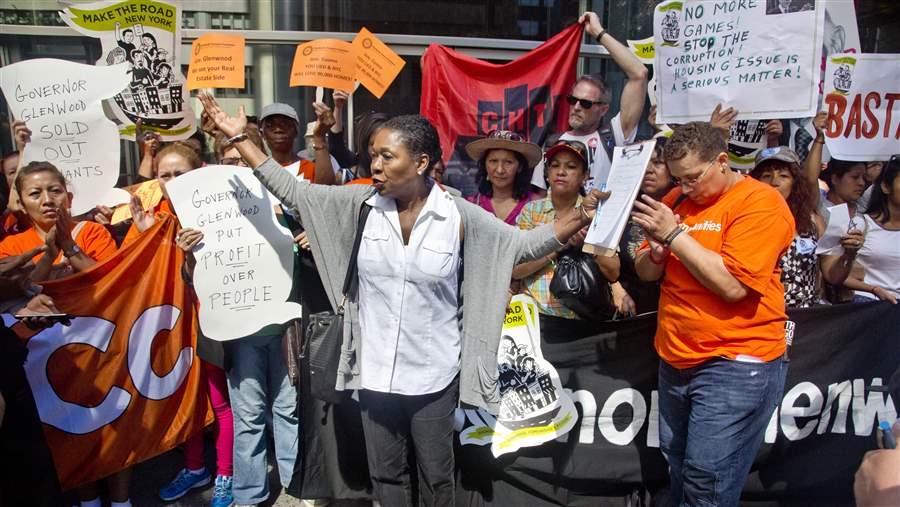 Delsenia Glover, center, protests outside the office of Democratic Gov. Andrew Cuomo against a deal struck this year to extend rent control in New York for four years. (AP)

The city council in Richmond, California, voted last week to cap how much rent landlords could charge tenants in the San Francisco Bay Area city where rents have increased an estimated 30 percent over the last four years.

In Seattle, where tenant activists say some renters complain their rent has increased by as much as 150 percent, two city council members last week hosted a packed town hall meeting to debate whether to impose rent controls — a move that could put the city at odds with the state.

Similar proposals to limit what landlords can charge each month are emerging in other California cities, such as Lafayette City and Alameda, as the price of rental housing skyrockets nationally amid greater demand and flat wages.

“Rents are higher than they’ve ever been. Wages are declining. There’s a huge, huge gap between wages and housing costs,” says Peter Dreier, former housing director for the City of Boston and chairman of the urban and environmental policy department at Occidental College in Los Angeles.

“Not surprisingly, there’s renewed talk about ways to protect renters,” Dreier said. “Rent control is part of the toolbox of policies that local governments can adopt without waiting for a big infusion of federal funds to create more affordable rental housing.”

Even in cities that have had rent regulations for decades, such as New York, the issue of affordable rents remains contentious. New York tenant groups cried foul when Democratic Gov. Andrew Cuomo and state lawmakers last month extended the state’s rent-stabilization laws to maintain controls on more than a million apartments, while allowing landlords to raise rents as much as they want on apartments that became vacant.

Rent control, in which cities set limits on how much landlords can raise rents on existing tenants, has always been a bone of contention, inspiring legal challenges all the way to the U.S. Supreme Court. (So far, rent control has been upheld.)

Advocates argue government controls are necessary to protect middle- and low-income renters from price gouging. But the apartment industry and some economists argue rent regulations don’t work and only serve to drive up the cost of housing in tight markets.

“It doesn’t serve the people who need it most,” said Jim Lapides, spokesman for the National Multifamily Housing Council (NMHC), an advocacy organization for the apartment industry based in Washington, D.C. “It hurts mobility,” he said, because people who have rent-controlled apartments tend to hold on to them.

One thing all agree on: There simply isn’t enough housing stock to accommodate the ever-growing number of renters in many of the nation’s most congested cities, particularly on the East and West coasts.

According to a March report by the National Association of Realtors, the gap between rental costs and household income is widening to unsustainable levels. This is partly a result of greater demand because homeownership is out of reach for many people following the 2007 housing crash that exacerbated the Great Recession.

In New York, rent control laws date to right after World War I, when there was a pent-up demand for housing. With rental housing at a premium, landlords took advantage, often jacking up rent as much as 100 percent. The concept of rental control was revived nationwide during World War II, when housing construction was put on hold.

In an effort to keep families in their homes, the federal government imposed rent controls. Those controls were lifted after the war, and only a handful of states still allowed them. But by the 1960s and ’70s, tenants began to push back.

“The rent control movement of the ’60s and ’70s was forged by low- and middle-income tenants, both of whom had their back against the wall,” Dreier said. “That’s now happening again. It’s the real estate industry versus the tenants.”

It’s difficult to gauge how many cities still have some form of rent control on the books, though estimates run into the hundreds.

But only the states of California, Maryland, New Jersey and New York, plus the District of Columbia, have rent control laws, according to industry group NMHC.

Massachusetts allowed rent control — only pricy Boston and nearby Cambridge and Brookline had it — until 1994, when voters narrowly voted against it. In 2008, California voters defeated Prop 98, which would have phased out rent control in the state.

“For the most part, housing and rent control is a local issue,” said Doug Farquhar of the National Conference of State Legislatures. “You don’t see the state getting too involved with landlord-tenant laws. A city … would adopt something and the state would stay out of it. But if a state will say, ‘We will pre-empt you,’ the city cannot come up with rent control.”

This often pits cities against states and Seattle versus Washington state could be next.

In Seattle, where the median rent is $1,600 for a one-bedroom apartment, Mayor Ed Murray, a Democrat, declared affordable housing an “emergency” situation and appointed a housing task force. So rent control is being talked about again.

Standing in the way, however, is state law that prohibits cities from imposing controls, said Roger Valdez, director of Smart Growth Seattle, a nonprofit in favor of housing development, rather than rent control, as a solution to the housing shortage.

“We need policies that encourage people and support them with the choices they want to make about their housing,” said Valdez, who at last week’s town hall meeting in Seattle debated against rent control — something he calls “a cheap way out.”

Kshama Sawant, one of the Seattle City Council members who hosted the town hall meeting, disagrees.

“Rents have reached stratospheric levels,” said Sawant, who is an economist. “We need to build a mass movement that becomes deafening, so politicians [in the Washington Legislature] are forced to back down. We need to fight this tooth and nail.”

Today, 42 million people, or about 36 percent of the population, rent their housing, according to NMHC. The median rent nationally was $905 in 2013, up slightly from the previous year, according to the U.S. Census American Community Survey.

But in big cities, that price tag is far higher. In San Francisco, which has rent control, median rent for a one-bedroom apartment is $3,500, according to a June report by Zumper, a national rental listing service that also tracks real estate trends. Following are New York at $3,100, Boston at $2,230, San Jose at $2,120 and the District of Columbia at $2,100.

Rent control laws can work in a variety of ways. In New York, for instance, there is a difference between rent-controlled apartments and rent-stabilized apartments.

Rent-controlled apartments are rare and apply to buildings constructed in New York City before 1947. This law limits the amount of rent a landlord may charge a tenant and restricts the landlord’s ability to evict. Rent-stabilization laws cover apartment buildings built after 1947 and before 1974 and provide protections to tenants. Rent increases are set by a board made up of nine members, including two tenant and two landlord representatives.

In 2012, a New York landlord took his case to the Supreme Court. James Harmon owned a brownstone on the Upper West Side. One of his long-term tenants had lived in a one-bedroom, rent-stabilized apartment since 1976. She paid $1,000 a month — far below the market value. Harmon argued that rent control amounted to an unconstitutional “taking” of his property. The Supreme Court declined to hear his case.

Lennie Siegel has been fighting for rent control and affordable housing in his hometown of Mountain View, California, since the 1970s. In 1980, he pushed to get rent control on the ballot — only to see it defeated in a special election in 1981.

Today, rents in Mountain View have shot up as high-income earners flock to the Silicon Valley town to work at high-tech companies like Google.

“Our area has too many good jobs” and not enough good housing, said Siegel, who now sits on the city council. “People are paying more than they would expect for the quality of the unit they’re getting.”

Meanwhile, he said, low-income people are getting pushed out of the market, along with middle-class workers such as teachers, tech workers, even doctors.

But Siegel, who ran for office on a housing development platform, said that while rent control can help some people, he’s no longer convinced that it is the solution.

“Rent control is a Band-Aid,” he said. “The long-term solution is keeping supply and demand in balance. Unfortunately, cities around here are much more welcoming of employment growth than they are of housing growth.”