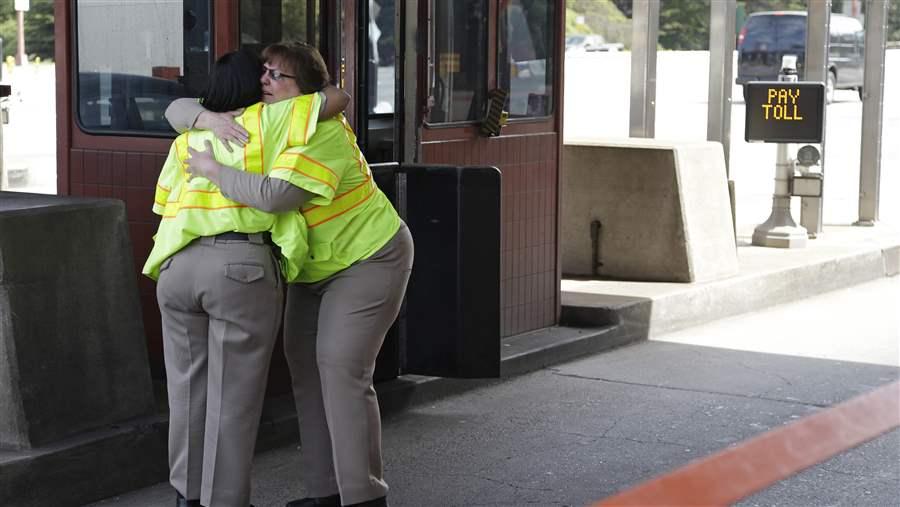 Toll collector Dawnette Reed, left, is embraced by co-worker Marsha Brandhorst, at the end of her shift on San Francisco’s Golden Gate Bridge in 2013. They were among more than two-dozen full-time toll collectors who were replaced by an electronic system that ended the need for motorists to stop and pay cash. A growing number of states are moving to the high-tech systems. (AP)

Remember when drivers would pull up to a toll booth, hand cash to a toll collector and wait for the gate to rise so they could pass?

Those days are fast becoming a thing of the past as a growing number of states demolish toll booths and switch to electronic, cashless tolling systems, such as E-ZPass. And so are the jobs of many of the men and women who collect tolls.

States and quasi-governmental road authorities, which increasingly are turning to tolls for some highway and bridge repair and maintenance, have followed the lead of private industry and replaced people with new technology in search of greater efficiency, better customer service and more cost savings.

What’s not in dispute is the fact that toll collector jobs have dwindled and will continue to do so.

“It is a dying profession,” said Bill Cramer, communications director for the International Bridge, Tunnel and Turnpike Association, which represents owners and operators of toll facilities. “People are doing away with toll booths because new technology has come along.”

Thirty-four states have toll roads, according to the toll group. At least 23 of them use some type of electronic tolling in combination with a cash payment system.

A growing number of states are eliminating toll plazas entirely in some areas and moving to all-electronic systems. At least six — California, Colorado, Florida, Georgia, Massachusetts and Texas — have swapped traditional toll booths for cashless systems on some roads or bridges, Cramer said. That allows drivers to zip past without having to slow down or queue into single-file lanes.

On San Francisco’s Golden Gate Bridge, for instance, officials did away with toll booths two years ago and moved to an all-electronic system. Twenty-eight full-time toll collector jobs were eliminated. Some transitioned to other positions.

On the Florida Turnpike, officials converted the southernmost portion of the road in Miami-Dade County to all-electronic tolls in 2011 and plan to do the same at two more South Florida interchanges by summer’s end. Turnpike spokesman Chad Huff said that 190 toll collectors and supervisors were laid off in the initial conversion and 80 retired or were re-assigned.

Massachusetts will be converting its entire turnpike to an all-electronic tolling system by the end of 2016. About 400 toll collector positions will be eliminated, although some workers will be offered other jobs. The state’s Department of Transportation reached an agreement with the toll workers’ union last year that gave them wage hikes and will allow up to 200 to retire with better benefits.

States traditionally have relied on funding from the federal Highway Trust Fund to build and maintain roads. But that fund is nearly depleted because it is financed by a federal gas tax that hasn’t been raised in more than two decades and Congress has yet to agree on how to keep the fund afloat.

As a result, states increasingly have turned to user-funded toll systems, many of which are at least partly electronic. The trend is toward making them all electronic.

President Barack Obama’s proposed six-year transportation spending plan this year would require all new toll facilities on highways that receive federal funding to only use all-electronic tolling after Oct. 1, 2016.

In some states, drivers open an account using a credit or debit card, and fares are automatically deducted each time they pass through. In others, the electronic system collects the total number of transactions in a month and sends an invoice.

For motorists without transponders, the license plate is photographed and a bill is sent to the registered owner’s address. Usually, there is an administrative fee added or the price of the toll is higher.

Cramer of the toll group said that there are more than 37 million electronic toll accounts in the U.S., a 20 percent increase over the past five years. He said the systems are more cost-efficient than the traditional toll-booth model because there’s no need to pay salaries, overtime and pensions or build and maintain toll plazas — small offices with bathrooms and breakrooms for employees.

In Florida, for example, officials say they’re saving $10 million a year in operational costs using all-electronic tolling on the southernmost portion of the turnpike. And in California, officials project that the switch to all-electronic tolls on the Golden Gate Bridge will save $16 million over eight years.

Officials also say cashless tolling is preferable for safety reasons, and it’s even better when the tolling is totally electronic.

“There’s no lane diving, where vehicles try to jockey for position to get to the right location,” said Florida Turnpike spokesman Huff.

Officials say cashless systems also are more convenient for drivers because they reduce bottlenecks — no one has to stop and wait in a long line to pay.

In New Jersey, toll collectors have faced another challenge — privatization. Hundreds of toll collectors — public employees — would have lost their jobs, but they fended off turnpike officials’ efforts to privatize. In 2011, they kept their jobs only after agreeing to salary cuts of $16,000 over two years. Last year, supervisors and managers agreed to lower pay so that toll collectors would not have to go through a second wave of cuts.

Bill Mullins said pay cuts basically forced him into retirement when he gave up his $66,000-a-year job as a New Jersey Turnpike toll collector, a job he held for more than three decades.

“I was 55 years old. When you get a reduction that big in your salary, how do you make up that difference?” said Mullins, now a part-time business agent for Local 194.

McCarthy said that even before the push to privatize, toll workers were dealing with the reality of E-ZPass, which started on the turnpike in 2000. He said at one time there were about 900 toll collectors working there. Now, there are nearly 200 full-timers and about 450 part-timers, he said.

“Technology is great, but there’s that human factor,” McCarthy said. “The reality is you’re putting people out of work.”

Unions aren’t the only critics. Some motorists say the transponder and camera-based system invades their privacy and they worry that a data trail on their travel is being created.

“We would like drivers to have the choice of being able to pay in cash or electronically,” said John Bowman, vice president of the National Motorists Association, a driver’s rights group. “There are people who don’t want a transponder on their vehicle for privacy reasons. They don’t want to be tracked where they go.”

Bowman said his group also is concerned about payment errors. He cites cases in which drivers faced thousands of dollars in late fees and penalties for failing to pay their monthly bills, when, in fact, their transponder wasn’t being read correctly or there was some other technical glitch.

While he acknowledged some motorists have been billed improperly because of electronic errors, he said toll agencies have responded quickly to resolve the problems.

“Millions of households in America don’t have sufficient access to banking, credit cards or debit cards so that they can link with an E-ZPass account,” said Miles Morin, spokesman for the Alliance for Toll-Free Interstates, a coalition of businesses and other organizations that oppose placing new tolls on existing highways. “They end up having to pay more because they’ll be sent a bill, often for a higher amount than if they had an E-ZPass. It’s discrimination against the poor.”

Cramer disputed that, saying tolling agencies have options to help them, such as offering motorists who don’t have credit cards a temporary transponder they can buy with cash and that operates like a prepaid phone card.

Despite the controversies, transportation officials — and some toll collectors — say it’s inevitable that states will continue to shift to a system that no longer uses old-fashioned, people-operated toll booths.

“Nothing stays the same,” said Mullins, the former New Jersey toll collector. “It’s like the elevator operator. We’re a dying breed. There’s not too many of us left.”