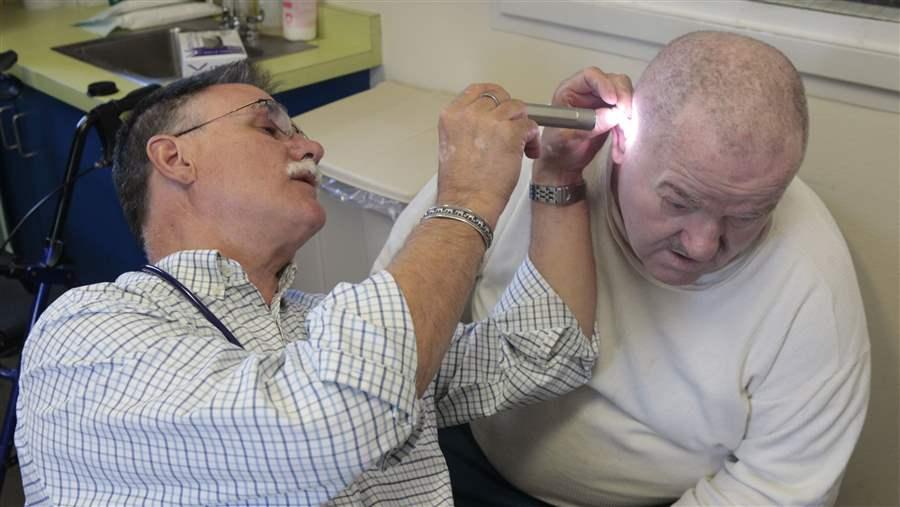 Dr. David Mathis examines the ear of an inmate at the California Medical Facility in Vacaville in 2012. California is one of at least 38 states that authorize the collection of medical fees from inmates. (AP)

Even going to prison doesn’t spare patients from having to pay medical copays.

In response to the rapidly rising cost of providing health care, states are increasingly authorizing the collection of fees from prisoners for medical services they receive while in state prisons or local jails. At least 38 states now do it, according to the Brennan Center for Justice at New York University School of Law and Stateline reporting.

The fees are typically small, $20 or less. And states must waive them when a prisoner is unable to pay but still needs care, in keeping with a U.S. Supreme Court ruling that prisoners have a constitutional right to “adequate” health care.

The rationale for charging copays is the same for prisoners as it is for people not behind bars: to discourage seeking medical care when it is not really needed.

“We do it for the same reason your insurance company does — to eliminate abuse by making the inmates put a little skin the game,” said Tommy Thompson, the jail administrator at the Rutherford County Sheriff’s Office in Tennessee.

But critics argue charging fees may cause ill inmates to forgo treatment, which can lead to worsening health and higher medical costs down the road as well as the possibility of spreading infections in the close quarters of prison.

“There are ways to deal with high demand other than copays, which are punitive,” said Robert Greifinger, the former chief medical officer of the New York Department of Corrections. 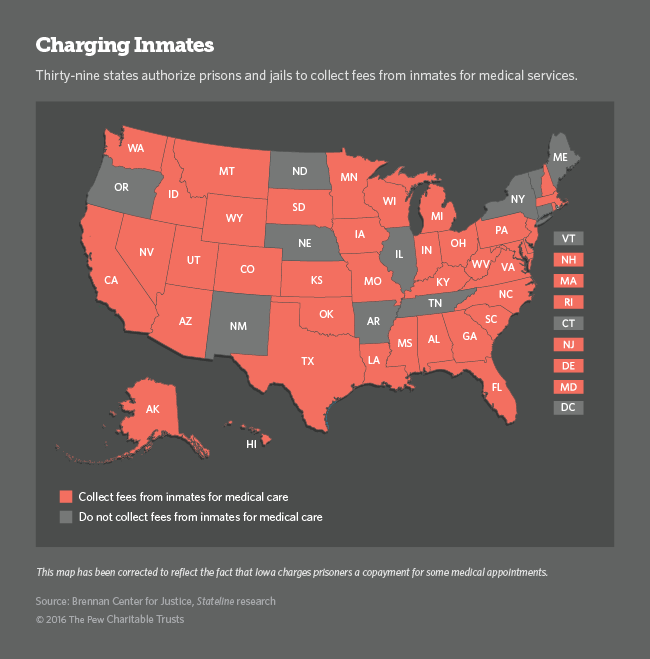 A Big Cost for States, Localities

Medical fees, usually for services rendered in the prisons or jails, typically are deducted from a prisoner’s commissary fund, which is replenished with money earned in prison jobs or contributions from family members. Prisoners also use their commissary funds to buy snacks, toothpaste, soap and other supplies. Sometimes, according to the Brennan Center, prisoners leave prison with a debt for their medical fees.

Though the fees are slight in most states, there are exceptions. In Texas, for example, the Brennan Center says that a state prison inmate who requests a medical visit can be charged $100, though all health service appointments that inmate makes in the ensuing 12 months are free. In Utah, state prison inmates can be charged up to 10 percent for any hospitalization outside of prison facilities — not to exceed $2,000 in a year.

“It may not seem like a lot of money but, typically, the prisoners are impoverished and, often, so are their families,” Greifinger said. “Sometimes, their choices come down to a medical appointment or shampoo.”

Health care in prisons and jails is not insurance-based. States and local jurisdictions pay for health care services for inmates. For any state prison system, it is one of the biggest and fastest growing budget items.

A July 2014 analysis by the Pew Charitable Trusts (Pew funds Stateline) found that states spent about $7.7 billion on prison health care in 2011, or about one-fifth of overall prison expenditures. Between 2007 and 2011, states' median growth rate in health spending per inmate was 10 percent.

The inmates’ copays don’t make much of a dent in the health care budgets of state correctional systems. Pennsylvania, for instance, reports that it collected about $373,000 from inmates in fiscal 2014, while spending $248 million on prisoner health care. Virginia says it collects about $500,000 a year in fees and spends $160 million. California also takes in about half a million in medical fees from prisoners but spends about $2.2 billion on medical care, including dental care and mental health. Michigan says it collects about $190,000 a year with a prison health care budget of $300 million.

The Michigan auditor general earlier this month faulted the state’s correctional system for not being aggressive enough in charging inmates copays. It failed to collect fees in 57 percent of inmate health care visits during a two-and-a-half year period starting in October 2011.

Different on the Inside

Chris Gautz, a spokesman for the Michigan department, said charging copays also teaches prisoners lessons about budgeting money, which is useful when they are released.

But Greifinger, the former New York medical officer, said inmates do not have the freedom that everyone else has to easily address their medical needs. For instance, most people who have a severe headache or a bad cut can get quick relief with a trip to a drugstore. Inmates cannot do that. They have to wait for an appointment with a prison doctor or nurse for those situations and, in many places, are charged copays as well.

Steve Rosenberg, president of Community Oriented Correctional Health Services, a nonprofit focused on health care for inmates, said that charging inmates was counter to one of the chief ambitions of health reform under the Affordable Care Act: preventive care, which can forestall worsening medical conditions and costlier treatments in the long run.

“If we have decided preventive care is a good idea, why correction systems would do anything to limit access is a little bit puzzling to me,” Rosenberg said.

He said there is a need for studies looking at whether medical fees cut down on health service visits by inmates or the effect they may have on the health of the prison population.

The National Commission on Correctional Health Care, a nonprofit that helps establish professional standards for health care in prisons and jails, opposes any fee-for-service (in which a person is charged for each treatment rendered) or copayment program that restricts prisoners’ access to health care.

But recognizing that many states have authorized fees, the commission has issued recommendations that prison systems should follow. Among them: Inmates should only be charged for medical services that they initiate, and they shouldn’t be charged for health screening or any required follow-up, emergency care, hospitalizations, perinatal care, in-house lab and diagnostic services, medication, diagnosis and treatment of contagious disease or chronic care.

A few states follow some of the recommendations. Nevada, for instance, only collects medical fees for injuries inmates cause to themselves or which occurred during voluntary recreational activities. Neither Virginia nor California charges for mental health services.

“The point is,” said Lauren-Brooke Eisen, senior counsel of the Brennan Center, “you have to be really thoughtful about what you charge for and what you don’t.” Nobody, she says, wants to see prisoners untreated when they are legitimately sick or injured.