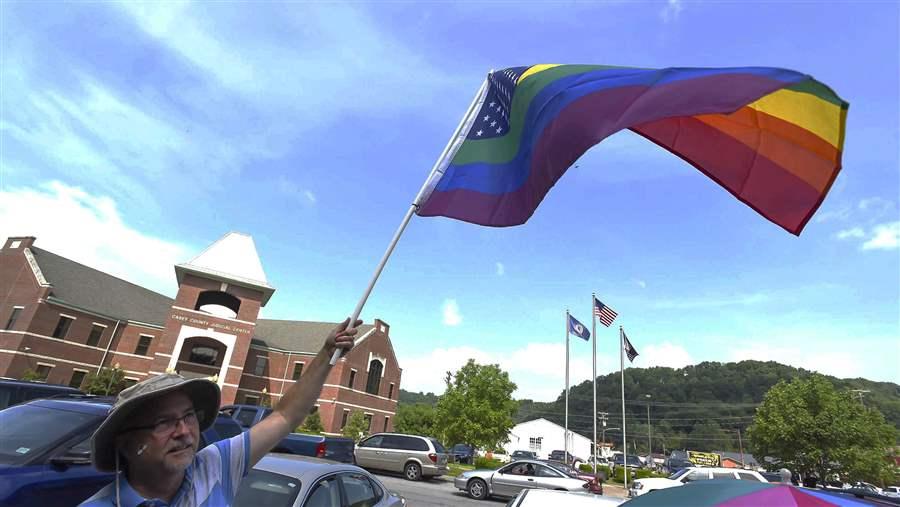 Tim Love waves a rainbow-colored U.S. flag in support of the Love Wins Rally in Liberty, Kentucky, July 18. The Supreme Court ruled same-sex marriage legal June 26, a ruling that could result in millions of dollars in economic activity and tax revenue for states. (AP)

The U.S. Supreme Court’s decision legalizing same-sex marriage could result in a financial windfall of up to $184.7 million annually in state and local tax revenue, as gays and lesbians head to the altar, creating a boom in the wedding industry and in the taxes that accompany the revved-up business.

That’s the projection from the Williams Institute at the UCLA School of Law, which has been tracking the effect of same-sex unions on states since 2001.

After the apparent rush to the altar levels off, however, the long-term revenue implications for states could be less obvious. A wide variance in state tax laws makes it difficult to calculate the effect a greater number of married couples would have on revenue from taxes on incomes, estates and properties.

Joint income-tax filings, for instance, could raise couples’ tax burdens if both partners are working or lower them if only one partner is working. Just combining households under the same roof could result in lower tax revenues, with fewer mortgage deductions and fewer properties being taxed. But states with a “marriage penalty” — higher taxes for married couples compared to what they would pay individually — could see revenue increases.

“Although we try to tease out the data as much as possible, we cannot say that there is one specific factor that contributes more when explaining why some [states] win and why some lose,” said J. Sebastian Leguizamon, one of three researchers at Tulane University who authored a 2013 study on the topic. Among the “tricky” factors, he said, is guessing how many couples would marry.

What’s more clear is the immediate effect — especially in the 14 states that banned same-sex marriage until the court’s June 26 decision.

The institute bases its projections on the effect that same-sex unions had on the states that allowed them before the court decision. A state-by-state study shows that in the first three years in which marriage was made legal in those states, economic activity and state tax revenues grew.

In each of the first three years after California legalized gay marriage in 2008, the state added $31.4 million in tax revenue and 2,178 jobs, the study found.

“For many years, we’ve known there was a positive revenue impact of marriage,” said Christy Mallory, the senior counsel with the institute who helped prepare the report.

Even before any state made gay marriage legal, Mallory said, same-sex commitment and civil unions buoyed the wedding and tourism industries and increased revenue from sales and visitors taxes.

But the findings also provide a caution for state tax collectors. After an initial surge, revenue leveled off as did the number of marriages — although revenue continues to grow in the 36 states that legalized same-sex marriage before the court’s June 26 decision. 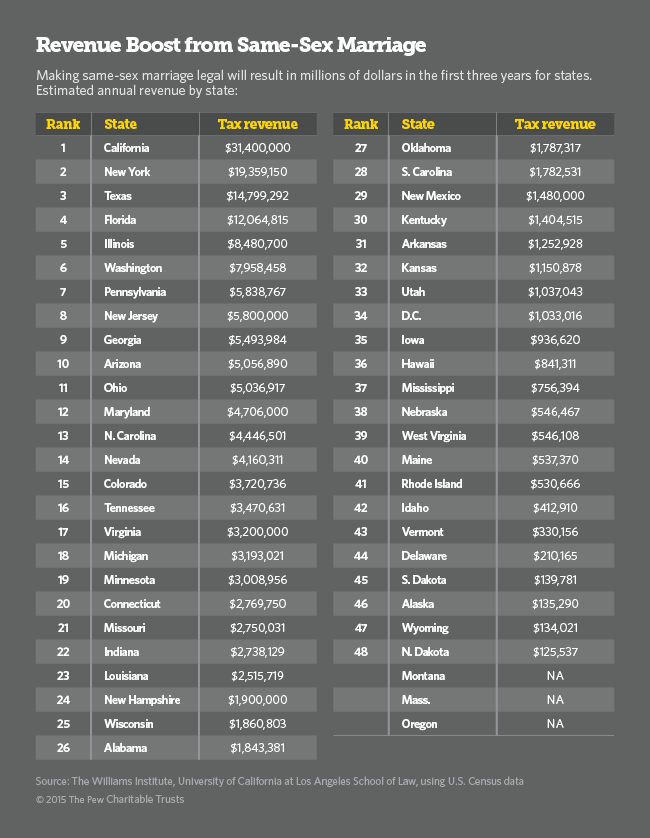 The issue of taxation has been integral to the debate about same-sex marriage.

In United States v. Windsor, the Supreme Court held that restricting “marriage” and “spouse” to opposite-sex couples for estate tax purposes was unconstitutional. In the 2013 ruling, the court threw out the Defense of Marriage Act of 1996, which contained the restriction.

The case involved Edith Windsor and Thea Spyer of New York who were legally married in Canada in 2007. Spyer died in 2009, leaving her estate to Windsor, who claimed the federal estate tax exemption for surviving spouses. The IRS rejected the claim, prompting the court case.

Looking ahead, the tax implications for gay couples and the resulting revenue from state income taxes are harder to calculate than the immediate sales tax impact of a surge in new weddings.

While buying a home can result in more revenue from state and local real-estate transaction taxes, it also can reduce a couple’s tax liability because of the homeowner deduction.

Of all the state and local taxes, the personal income tax is the one into which marriage factors the most.

The 2013 Tulane study, published in the Journal of Policy Analysis and Management, sought to assess the effect same-sex marriage would have on income tax collections. It found that more states, 23, would see a rise in revenue than would see a decline, 21. (The remaining states do not have a personal income tax.)

Same-sex marriage can result in revenue losses up to $29 million, in California, or gains up to $16 million, in New York, the report estimated.

Many variables figure into which states are likely to benefit and which are not, according to Leguizamon, the Tulane study researcher, who is now a senior lecturer in economics at Vanderbilt University.

A key factor, he said, is the average overall income in a state. In a state where income is higher, tax revenue is higher as well. Another is the number of same-sex couples in a state.

The number of married couples with one earner versus the number of couples in which both spouses are working will also make a difference in tax outcomes. One-earner couples are more likely to receive a tax break for filing jointly, which means less revenue for the state. When both spouses work, couples filing jointly tend to pay higher rates than as two people filing separately, resulting in more revenue for the state.

California, for example, has a large number of one-earner couples, which usually means lower tax burdens and less revenue for the state. New York, in contrast, has more two-earner couples.

Another factor is disparity in the incomes of two earners who are married and filing jointly. If there is a wide gap between the two incomes, taxpayers usually pay less because of rate structures — a loss for the state. For example, if one earner in the couple makes $125,000 and the other $25,000, they generally get a tax break compared to couples who both earn $75,000, all other tax factors being equal. This would appear to be the case in California, where the state would lose revenue if all the couples in the study’s sample got married, Leguizamon said.

On the other hand, in New York, it appears that many of the two-earner couples have comparable incomes. When you add this to the fact that a lot of these two-earner couples are earning higher incomes than those in California, it is not surprising that more revenue is generated for the state, he said.

Ultimately, Leguizamon said, same-sex marriage only modestly affects state treasuries when taken as a portion of their overall revenue.

The 14 states that had banned same-sex marriage will be concerned more immediately with amended income tax filings springing from the court decision.

Married couples, under IRS regulations, generally have three years to file amended tax returns to reflect their married status. This could happen if they were married but didn’t file any returns for three years and want to square it with the government. Or, they could re-file if they realized they made an error by filing separately and want to recalculate their taxes.

Generally, states follow the federal government’s lead on filing amended tax returns. And Kansas, which is one of the states that had banned gay marriage, is grappling with the issue.

In 2013, attorney David Brown of Lawrence, Kansas, filed a suit on behalf of his gay, married clients — Michael Nelson and Charles Dedmon, and Roberta and Julie Woodrick — who married in California but were living in Kansas.

Both couples were seeking to file taxes as married, which Kansas did not allow since the state had passed a constitutional amendment outlawing gay marriage.

Jeannine Koranda, a spokesowman for the Kansas Department of Revenue, said legally married same-sex couples who are Kansas residents may file 2015 tax returns as “married, filing jointly.” They may also amend their 2014 returns, if they had filed singly or requested an extension at the time of the filing.

But, she said, the couples may not amend their 2013 or 2012 returns because “at that time, there was a constitutional amendment in Kansas that did not recognize same-sex marriage.”

That’s a position that probably will be left to a court to decide. Joe Henchman, a state tax expert with the Tax Foundation, a nonpartisan research group, said that when the Supreme Court rules a law unconstitutional, as it essentially did with Kansas’ ban on same-sex marriage, “it’s as if it has always been unconstitutional.” Brown likely will be litigating this issue too.