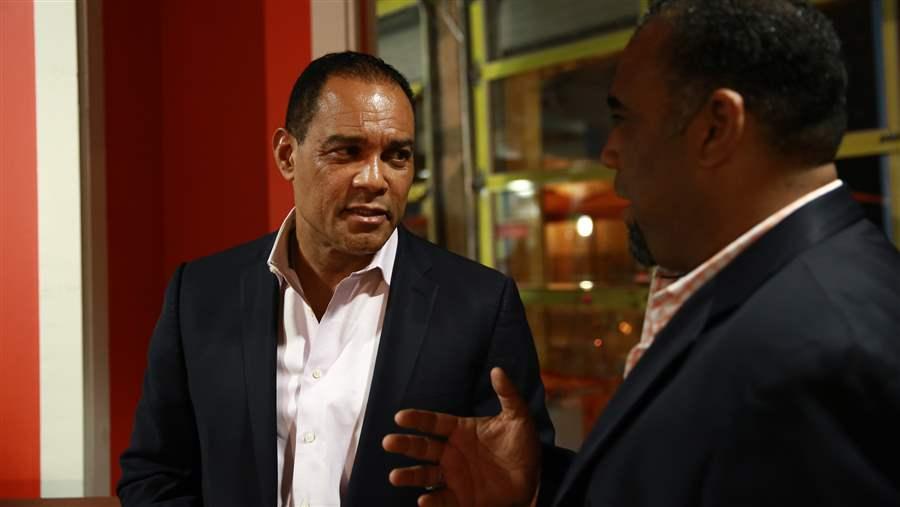 Rudy Moise, left, a native of Haiti who ran for Congress twice, talks to Clifford Baron, a onetime Florida resident who is running for office in Haiti. Haitian-Americans are gaining a political voice. (Curtis Childs)

Third in an occasional series on black immigrants.

LITTLE HAITI, MIAMI — Here, at the Little Haiti Cultural Center, things are at an impasse. Robert Labrousse, Haiti’s new minister of Haitians living abroad, has come to speak to his constituents, members of la dyaspora. He wants to talk about the new air-conditioned facilities awaiting them in Port-au-Prince should they come for a visit. They want to talk about his government’s plans to help ethnic Haitians facing expulsion from the Dominican Republic.

In Creole, English and French, this gathering of first and second generation Haitian-Americans makes it clear they want answers to the crisis in the Dominican Republic. But Labrousse has none. Finally, in exasperation, one of the expatriates in the crowd tells him, “Just like the police in New York turned their backs on the mayor; we should turn our backs on you.”

The plight of Haitian-Dominicans has become a rallying point for Haitian-Americans, who have become more politically active in the past decade. Around the country, they have petitioned and protested, threatening boycotts and carrying signs that read “Black Lives Matter” and “Stop Ethnic Cleansing.” Here in Miami, just a few hundred miles away from the Caribbean capitals of Port-au-Prince and Santo Domingo, the issue seems particularly urgent. Haitian migrants and Dominicans of Haitian descent have until Aug. 1 to complete their paperwork in the Dominican Republic or risk deportation.

Haitian-Americans, both long-term residents and more recent arrivés, are propelling themselves on to the political scene. Politics have traditionally been the way immigrants have gained power in the U.S., starting on neighborhood councils and school boards, moving up to city halls and statehouses, and on to the national stage.

“Political engagement starts with becoming a citizen, to voting, to running for office,” said Regine Jackson, associate professor of sociology and Africana studies at Agnes Scott College in Atlanta. “For all groups, historically, this has been important. We had the political machines that were developed where there were large concentrations of Irish immigrants. They used those political machines to advance big political purposes, from getting John F. Kennedy elected to small local activities, like making sure the trash got picked up.”

For Haitian-Americans, many of whom arrived after fleeing political persecution in the poorest nation in the Western Hemisphere, finding a political voice has been hard. Where they come from, in the not so distant past, speaking out could get you killed.

But that’s increasingly changing. Haitians are enthusiastic voters, political scientists say. A Haitian-American serves in the Florida Legislature. (There have been as many as three.) The mayor of heavily Haitian North Miami is Haitian, as are two city council members. Last year, a Haitian boat refugee who started off scrubbing floors at Krispy Kreme was elected chairman of the Miami-Dade County Commission, a first for Haitians.

The same increasingly is true elsewhere. Haitian-Americans serve in the state legislatures of Massachusetts and New York. The first elected attorney general in the District of Columbia fled the lethal Duvalier regime with his family when he was 3 years old. The mayor of Plano, Texas, was born in Haiti. Two commissioners in the administration of New York City Mayor Bill de Blasio are of Haitian descent. And last year, Mia Love, the Brooklyn-born daughter of Haitian immigrants, became the first black female Republican and the first Haitian-American elected to Congress.

“We’re still having the first, the second and the third [Haitian-Americans] in political office,” said Edwidge Danticat, a Haitian-American novelist and 2009 MacArthur Foundation fellow. “You can’t help but be inspired by their life stories.” But to be successful, Danticat said, Haitian-American politicians have to serve a broad constituency while being sensitive to the needs of Haitian-Americans, particularly the poor.

“There are a lot of poor Haitians that are living in the shadows,” Danticat said. “You need politicians that can identify with the underdog, with the undocumented. That’s something being Haitian in Miami can teach a politician.”

It’s hard to gauge the exact number of people of Haitian descent living in the U.S. The U.S. Census Bureau places that figure at 929,074 but the Migration Policy Institute, a Washington, D.C.-based think tank that focuses on immigration, says it is 915,000, not including the scores of Haitians living in the U.S. illegally.

The first documented wave of Haitian immigration to the U.S. began in the early 1930s, when the Immigration and Naturalization Service began tracking Haitians as a distinct group of Carribean immigrants. By the 1950s and ’60s, the numbers surged, as droves of the Haitian elite escaped the dictatorship of François “Papa Doc” Duvalier. Most settled in New York City and Boston. Moving to the segregated South was not an option, according to Alex Stepick, emeritus professor of global and sociocultural studies at Florida International University.

But by the ’70s and ’80s, Stepick said, poor Haitians started washing up on the shores of Florida. The arrival of newer, poorer Haitians highlighted a long-standing rift between upper- and lower-class Haitians, a rift that is reflected stateside in political infighting.

It takes an insider to illustrate these differences.

Duval-Carrié, the artist, sits in his light-filled studio in Little Haiti, surrounded by his massive paintings of Haitian voodoo deities, sipping white wine and smoking a cigarette, breaking down the intricacies of Haitian color and class, and the way they work in the U.S. today.

Haiti is the first black republic, where black slaves overthrew white slave owners to declare independence in 1804. But after the revolution, the powers that be were the mixed-race merchant class, a relatively small and prosperous group. The far more numerous, darker skinned Haitians were overwhelmingly working class and poor, Duval-Carrié said. The result: a color-based caste system.

Today in the U.S., this tension between the haves, who arrived on planes, and the have-much-less, who arrived on boats, is played out in Florida politics, said Jacqueline Charles, a Haitian-American journalist who covers the Caribbean for The Miami Herald.

“Color and class are huge here,” Charles said, adding that these differences are not quite as stark in the U.S. Still, she said, the infighting is put on blast in the local media, particularly in the Creole language radio stations, where many a local political campaign has been won — and lost. In 2005, Jean Monestime, the Miami-Dade County Commission chairman, lost the North Miami mayoral race after a band of supporters for Jean-Bertrand Aristide, the twice-exiled former president of Haiti, denounced the former refugee on Creole radio as an out-of-touch snob who hated Aristide. He lost a second time in 2007.

“Haitian radio can be really effective tool for Haitian-Americans to talk about larger issues in the community,” said Charles. “And it can also be a tool to run a really nasty campaign.”

When faced with a crisis like the 2010 earthquake, the Haitian-American community unites. In 1994, the community coalesced over the detainment of thousands of Haitians in Guantanamo Bay, particularly the orphaned children confined there for months. Haitian activists staged hunger strikes and forged alliances with other activist groups, Charles said.

Before then, Haitians in the U.S. focused their political energy on the happenings in Haiti. But the plight of undocumented Haitians prompted many here to become U.S. citizens. They lobbied politicians, fighting to get the Haitian Refugee Immigration Fairness Act passed in Congress in 1998. And they started running for office, loudly proclaiming their Haitian-American-ness, Charles said. In 2000, Phillip Brutus was the first Haitian-American elected to the Florida Legislature. The first Haitian-American elected to office in the U.S. was Philippe Derose, as councilman of the village of El Portal, Florida, in 1993. He later served as its mayor.

Until then, to be Haitian was a source of shame for the younger generation, said Sandy Dorsainvil, the Manhattan-born managing director of the Little Haiti Cultural Center. Haitians were stereotyped as AIDS-ridden boat people, refugees shunned by everyone, including the African-American community, she said.

“If you want to see a community develop, you have to have input in the political process,” Dorsainvil said.

“If they vote, why are they still struggling?” Campbell said. She’s determined, she said, to fight for poor Haitian-Americans who continue to grapple with issues of literacy and English proficiency, as well as inadequate housing and health care.

Rudy Moises, a Haiti-born doctor, lawyer, actor and entrepreneur, is an example. He ran unsuccessfully for Congress in 2010 and 2012. The first time, he said, the primary election field was overcrowded with Haitian-Americans, who split the vote. In 2012, Moises faced off against incumbent, Fredericka Wilson, who is African-American. After President Obama endorsed Wilson, he said, he didn’t have a chance at wooing African-American voters.

“I cannot compete with the president of the United States,” Moises said, who nonetheless said he would run again for Congress.

As the Haitian political base matures, the next generation of politicians and activists will seek alliances with other groups, like the Cuban-Americans who came before them and forged a forceful political block, said Gerard Philippeaux, Monestime’s chief of staff.

But change in a democracy takes time, said Phillippeaux, who was born into a political family in Haiti. He said he counsels Haitian-American voters to be patient.

“In Third World countries like Haiti, politicians can do almost anything. In the United States, I tell people, ‘The process is more important than any elected official,’ ” Philippeaux said. “There’s a lot of convincing to affect change on the political level. That’s probably one of the most important things the Haitian community needs to realize.

“And that’s the beauty of having an open society like the U.S. You still have a chance to make a change.”