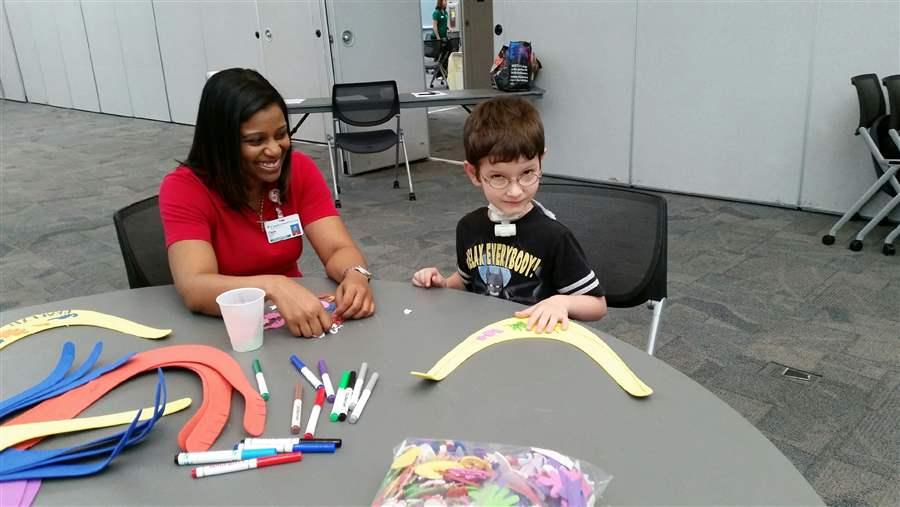 TAMPA, Florida — Five-year-old Lakota Lockhart talks about Batman nonstop. When his mom, Krystal, can wedge in a word, she describes what life has been like since Lakota was born with a rare central nervous system disorder that causes his breathing to stop every time he falls asleep.

She says they’re lucky Lakota was born across the street, at Brandon Regional Hospital, or she might never have known about the Chronic Complex Clinic at St. Joseph’s Children’s Hospital.

The brainchild of Dr. Daniel Plasencia, the St. Joseph’s clinic was created 14 years ago to improve care for kids with chronic conditions affecting more than one organ system. “Their treatment was too complex for most pediatricians,” Plasencia said. “They needed a medical home and we provided it for them.”

Approximately 3 million children in the U.S. are medically complex, meaning they require intensive treatment from a wide array of specialists. That number is expected to reach nearly 5 million in the next decade as medical advances improve life expectancy for kids with congenital heart defects, sickle cell anemia, cerebral palsy and cystic fibrosis. Kids like Lakota who have rare conditions, those born extremely prematurely and survivors of near drownings, auto accidents and other catastrophic events are also living longer thanks to new technology.

Research shows that programs like St. Joseph’s save Medicaid and commercial insurers money by reducing emergency room visits and hospital stays. But while a few complex care units in places like Little Rock, Arkansas, Milwaukee and Cleveland have cropped up around the country, the idea has not caught on nationwide. That’s largely because Medicaid and other insurers do not fully reimburse hospitals for specialized services, such as 24/7 phone consultations and hourlong meetings between parents and specialists, that are crucial to success in complex care.

A study published in December by the Journal of the American Medical Association found that children who were enrolled in complex care clinics had lower medical costs than complex care kids who were not enrolled, $16,523 per year compared with $26,781 per year. More than 90 percent of the children in the study were covered by Medicaid.

Still, “no one has come up with a viable payment model,” Plasencia said. “We get 20 cents on the dollar for what we do. There’s no incentive for other hospitals to do it.”

Of the 32 million mostly healthy children Medicaid covers nationwide, only 2 million or about 6 percent, have complex conditions. But their care represents more than 40 percent of overall Medicaid spending for children.

In Florida and the rest of the country, hundreds of thousands of kids stand to benefit from the type of seamless care Lakota and about 800 other children receive here each year. The Children’s Hospital of Wisconsin in Milwaukee and the Arkansas Children’s Hospital in Little Rock serve about 700 kids each. Many families travel long distances to get to these clinics.

The staff at the St. Joseph’s clinic, which provides 24-hour coverage, includes 10 pediatricians, a nutritionist, a pharmacist, three nurses, a social worker, a behavioral health specialist, a scheduler and an expert to help parents navigate Medicaid and the Children's Health Insurance Program.

Instead of leaving parents to fend for themselves, the staff helps coordinate appointments with local pediatric specialists who are on call in the hospital and arranges for transportation when necessary. The clinic also teaches parents how to care for their kids at home and supplies them with the needed medical equipment, all of which has resulted in fewer emergency room visits and fewer and shorter stays in the hospital.

“We know this works for kids and we know it saves money for the payers, whoever they are,” Plasencia said. “Now we have to make it financially sustainable for hospitals.”

To do that, St. Joseph’s last year joined nine other hospitals in California, Colorado, the District of Columbia, Florida, Ohio, Pennsylvania and Texas in a federally funded project aimed at finding a payment formula that will allow Medicaid to reimburse hospitals and other providers for the extra services that make it possible to limit the amount of time kids with complex conditions spend in hospitals.

The goal of the $23 million grant from the U.S. Department of Health and Human Services is to enroll about 9,000 Medicaid-covered children in complex clinics and achieve a 6.8 percent decrease in total spending over the three-year period of the grant, which ends in 2017.

A separate federal grant for $9.4 million was awarded last year to Wisconsin to expand the Milwaukee-based clinic statewide.

“Medicaid liked our program and saw we were saving money and started to give us a small care coordination fee for nurses and doctors,” said Dr. John Gordon, who runs the complex care clinic at the Children’s Hospital in Wisconsin. “We’ve had a good relationship with Medicaid. But over the years we cost the hospital money and we cost the medical college money because we all work for them. So we had this ongoing discussion with Medicaid about how it would be nice to provide this care for more kids, but it wasn’t possible given that it was a money losing proposition.”

Dr. Dennis Kuo heads the complex care unit at Arkansas Children’s Hospital. Over the last 15 years, he said, “Folks around the country have independently started these programs. They have similar criteria, but their differences reflect the people who started them.”

Pediatricians and intensive care specialists were seeing kids who fell through the cracks between specialists and between inpatient and outpatient care, he said.

According to Kuo, doctors and nurses across the country were seeing very sick kids who spent a lot of time in hospitals. They wanted to improve kids’ lives and cut hospital bills at the same time.

“That’s a very noble thing to do,” he said, especially because they were not getting paid for it. Nationwide, Kuo said, “We need to learn how to stop taking care of kids who are sick and learn how to pay for care to keep kids well.”

Complex care experts say that any care delivery or financial model that results from these federally funded projects must be flexible. The same plan will not work everywhere. “One of the most critical pieces of the grant is that we need other people to test this,” Plasencia said.

In Florida and elsewhere, it will also be critical for health insurers, including Medicaid managed care organizations, to agree to take on the risk of paying hospitals for the extra care they provide to keep kids as well as possible.

“There were no indications during pregnancy that there were any problems,” Krystal recalled. But when Lakota was born by cesarean section, he cried once and she heard the nurses shout, “Breathe, breathe!” Two days later, Lakota was transferred to St. Joseph’s intensive care unit for newborns, where he was treated and diagnosed. From there he graduated to the complex care clinic where he saw pulmonologists, neurologists, gastroenterologists and other specialists.

After 68 days and a couple of surgeries to insert a breathing tube in his trachea and a feeding tube in his stomach, the clinic’s staff prepared Krystal and her husband to take Lakota home. “It was like military boot camp. Not only was he our first child, he was a sick child. We knew nothing. When he came home, he came with lots of accessories and instruction books,” she said.

For the first year, Krystal said they visited the clinic twice a week to make sure everything was working right. “It was a huge learning curve.” Now, she said, “I have my own rolling hospital unit with me,” which includes a tank of oxygen and tubes, a carbon dioxide monitor to make sure he’s breathing, and a ventilator in case he’s not. Lakota reminded her about the suction pump to clean out his breathing tube.

“We’ve definitely avoided ER visits and hospital admissions,” Krystal said. “This year alone, I’ve called in three times when he’s had a fever or some other problem. They tell me what to do and set up an appointment at the clinic the same day. Our safe zone doesn’t need to be in a hospital,” she said. “I’m grateful to have the clinic here to avoid all that.”

This weekend, Lakota will celebrate his sixth birthday. Batman was the theme last year. This year, Krystal said, he had a hard time deciding what he wanted. At first it was Scooby Doo, but then they settled on the Justice League — an entire team of superheroes.