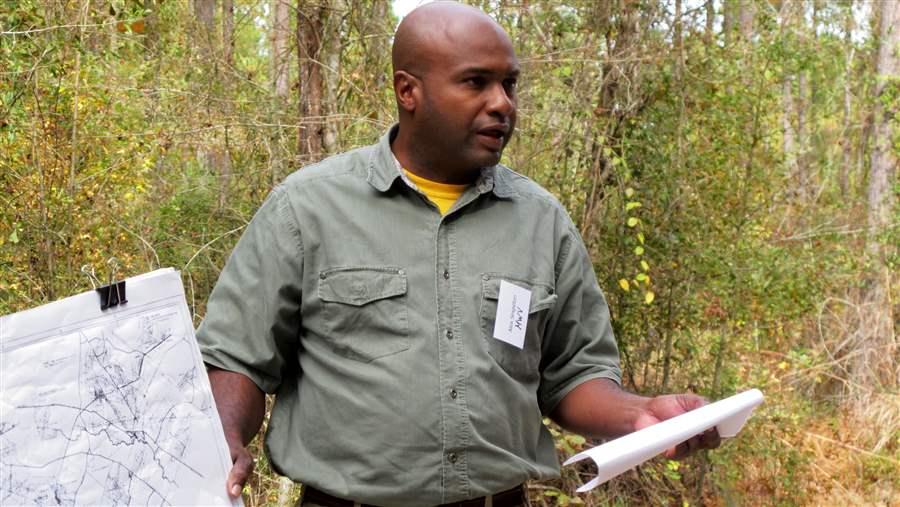 Alex Singleton is a board member of the Center for Heirs' Property Preservation, which helps families clear titles to heirs’ property in South Carolina. States are just now moving to help families hold on to the value of land that has been passed down through generations without deeds. (AP)

In Mount Pleasant, a suburb of Charleston on the South Carolina coast, 72-year-old Richard Mazyck only recently acquired the title to the land on which he’s lived his entire life.

The land once belonged to Mazyck’s father, and when he died it was passed down to Richard and his four sisters and brothers. But the elder Mazyck did not have a will, leaving his African- American descendants with what is known as heirs’ property. Without a deed, the heirs are unable to develop the land and are at risk of losing it entirely.

This type of succession — property passed without a will — stems from the Reconstruction era, when African-Americans gained property rights. At that time, African-Americans often did not create wills to establish formal ownership for future generations because they were denied access to the legal system, did not trust it or could not afford it.

Across the country, states are identifying family properties passed down without deeds. Some of them are taking action to ensure that property owners can retain their land and its value.

Six states — Alabama, Arkansas, Connecticut, Georgia, Montana and Nevada — have adopted versions of the Uniform Partition of Heirs Property Act, a draft bill being shopped to state legislatures by the nonprofit Uniform Law Commission to make it easier to divide property and preserve family wealth as the owners multiply over generations.

The problem with passing down property without a formal legal record is that any single owner can petition the court for a forced sale of the property. Over time, as the number of owners reaches into the dozens, the risk of a money grab increase and family members become targets for real estate developers looking to score property below market value in popular locations.

Mazyck and his siblings, whose land is not far from beach resorts, were able to evenly divide their 5 acres about three years ago with the assistance of the Center for Heirs’ Property Preservation, a Charleston nonprofit that helps families to establish formal land ownership. With a proper deed, a family can leverage its equity and qualify for home improvement loans that were impossible to get with no official living owner.

“It’s much easier now than before,” Mazyck said. “I can get anything I want now through the bank because everything is in my name. [My siblings] all are happy with it now because they’ve got something they can call their own.”

Before they split up their property, Mazyck and his siblings were challenged by a property tax burden. Each having built or contributed to various structures on the land, the siblings had a hard time agreeing on how much of the tax each owed.

“[My father’s] house was the only house on the land,” Mazyck said. “He used to do a little bit of farming, but people started building on the land. Everybody had a section, but it wasn’t in anybody’s name.”

Having generations of landowners all entitled to the same tract of land challenges families whose co-owners may disagree on how or whether to preserve it, said Tish Lynn, resource development coordinator for the heirs’ center.

Heirs’ property is typically sold quickly and for less than market value, robbing owners of what is sometimes their only source of wealth.

“There isn’t a family we’ve served that doesn’t have a story about land lost,” Lynn said.

Her group serves families in seven counties representing at least 47,000 acres of heirs’ property to protect. It aims to determine a statewide total by the end of the year.

Such holdings, however, are not always large rural and agricultural land. It is especially difficult to establish a title to heirs’ property in cities, where small, single family parcels cannot be physically divided. Urban owners often take a loss because such sales tend to fetch below market value.

Without a deed, co-owners are also unable to access government assistance or relief. In Houston and other areas of Texas, low-income homeowners had trouble accessing federal recovery money following hurricanes Ike and Dolly in 2008, said Heather Way, a clinical professor and director of the Entrepreneurship and Community Development Clinic at University of Texas School of Law.

“At some point, that was the greatest asset that a family ever had and that asset has been lost by becoming heirs’ property,” she said.

A Uniform Law for All States

A handful of states have passed piecemeal measures to support families owning heirs’ property, but the law-writing group is urging legislatures to adopt its draft bill.

The proposal would allow a co-owner to buy out another who wants to push the property to sale and establish a thorough review process for courts to determine whether the property should be sold or divided among the owners. It also would require courts to order open market sales to ensure properties are not sold below market value.

Courts would have to consider six factors: whether it can be practicably divided, whether its division would create parcels for which the aggregate value would be less than the whole, duration of ownership, an owner’s sentimental attachment, whether an owner would be harmed if he or she cannot continue to use the property and how much each owner has contributed to taxes, insurance and other expenses.

Thomas Mitchell, a law professor at the University of Wisconsin Law School and author of the draft bill, said problems with heirs’ property aren’t confined to South Carolina’s low country, a popular tourist destination along the state’s coast that was previously known for its agricultural assets and as a place where African-Americans settled following their emancipation from slavery.

“You’re going to see it anywhere you have poor, or sometimes even just middle-class, property owners who have not been able to organize their common property ownership in a sophisticated way,” Mitchell said. For landowners with means, it is typical to pass down property via a will, limited liability corporation or family trust, he said.

The proposed act was also introduced this year in Hawaii, as well as in South Carolina, where lawmakers are expected to continue working on the bill next year during the second half of the legislative session. Mitchell said he and others at the commission are working with legislators in Hawaii, where a lot of property has been passed down without a will, to illustrate the success of the law in other jurisdictions.

Heirs’ property also contributes to the deterioration or abandonment of properties in urban areas, Mitchell said. Without a formal title to their property, families rarely qualify for mortgages or home improvement loans, leaving properties to fall into disrepair.

Division is sometimes physically impossible in urban settings, where many properties are small parcels or single-family homes. That’s why Mitchell’s proposal pushes for open market sales rather than typical court-ordered sales that turn property around in a matter of weeks — often for far less than it is worth.

“If you have a single-family home in Washington, D.C., where you have six relatives who own it and they’re not getting along, you can imagine it would be difficult to divide the house,” he said. “There should be a sales procedure that is utilized that would more appropriately yield a price that [matches] fair market value.”

There aren’t many opponents to the partition act, said Benjamin Orzeske, who helps state lawmakers pass uniform laws as legislative counsel for the commission.

Typically, judges and court clerks oppose the measure because it creates more steps for them to follow when they must decide between selling and dividing, he said.

It is not known how much land around the country is heirs’ property, but some localities have analyzed the issue. A study from Philadelphia VIP, a group that provides legal services to low-income Philadelphians, showed there were 14,000 pieces of property with what they called tangled title issues in 2007.

“It’s enough of a problem, I think [the act] is potentially good legislation for every state, but whether it will ever get there is hard to say,” Orzeske said. “There are a lot of other priorities before people get around to this problem.”

Transfer of Deed on Death

Twenty-five states and the District of Columbia have adopted other measures to protect property upon the original owner’s death. Through transfer-on-death laws, these jurisdictions have made it possible for owners to designate someone who will acquire the deed to their property when they die.

While these laws do not address the land partitioning process as the commission’s proposal does, they do create a way to ensure a deed does not die with the owner of a property, eliminating the need for a formal will and probate process.

The laws are also beneficial because many low-wealth property owners may be skeptical of creating wills or lack the resources to do so, said Joanne Savage, a staff attorney at AARP’s Legal Counsel for the Elderly in Washington.

In the District, the model partition act has been proposed but not passed. The transfer law, however, has been in effect since 2013, helping seniors who would otherwise consider adding a family member as a co-owner of their house — a move Savage advises against.

“The transfer on death deed is really a great step forward,” she said. “It keeps the title free and clear in the owner until they pass.”