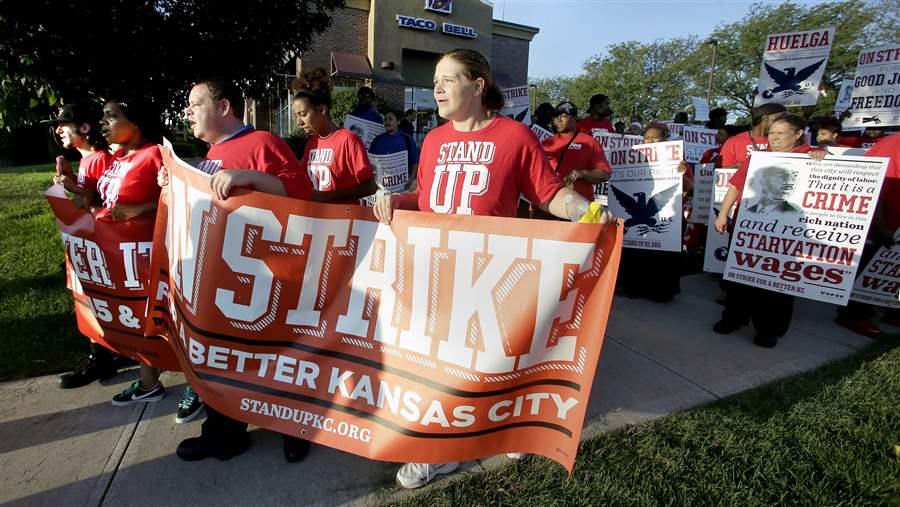 Because of incorrect information provided to Stateline, a previous version of this story stated that the Missouri Constitution might prohibit Kansas City's minimum wage ordinance. It is state law that might invalidate the city's wage ordinance.

Thursday morning, labor advocates gathered to pray on the steps of city hall in Kansas City, Missouri. They pledged to remain there, fasting, until the city council’s vote this week on a proposal to raise the city’s minimum wage. The state’s current minimum is $7.65. The council is weighing an increase to $13 per hour by 2023.

A legal fog has hovered over the city’s deliberations for months. Last week, Democratic Gov. Jay Nixon vetoed a bill that would have explicitly banned cities and towns from requiring employers to pay a certain wage or offer benefits such as paid leave. Legal opinions differ on whether current state law might already prohibit cities from doing so, says Michael Grimaldi, press secretary to Kansas City Mayor Sly James.

Kansas City is caught in the middle of a national fight that pits labor against business and increasingly, cities against states. As city after city has voted to give low-wage workers a raise in recent years, state after state has passed laws limiting local governments’ power to do so. Sixteen states now have laws forbidding local municipalities from raising their wage floors, with Michigan being the latest to pass one this year.

Legislators who support these laws say that a statewide minimum wage creates a stable business climate, and thus helps the economy. But some economists say there are good arguments for having a higher minimum wage in urban areas.

If people agree to a major minimum wage increase in Kansas City — and if doing so doesn’t have much of an effect on the economy — well, maybe it can be raised everywhere.

In early June, at the Mayor’s request, Katz started mediating discussions on the issue between labor, business and civil rights representatives. The first time the group met, he could tell immediately who in the audience favored an increase. A group of advocates who crowded into a room wore red T-shirts bearing the name of a local group of low-wage workers, Stand Up KC, that has been agitating for a $15 per hour minimum wage.

On April 15, Stand Up KC members were among the labor activists who marched through the streets of Kansas City, St. Louis and cities across the country. The Service Employees International Union (SEIU), a major backer of a national Fight for $15 campaign, says a higher wage floor would help the economy by putting more money in workers’ pockets and lifting people out of poverty.

Just 3.9 percent of workers who are paid by the hour earned the federal minimum wage of $7.25 or less in 2014, according to federal statistics. But the minimum wage issue is politically popular, perhaps because it taps into a broader set of economic anxieties: concern about stagnant wages, income inequality and the perceived fragility of the middle class.

Twenty-nine states (including Missouri) and the District of Columbia have set minimum wages higher than the federal level. But only cities — whose governments tend to be more left-leaning than state legislatures — have made efforts to raise the minimum wage as high as $15.

Since 2003, over 20 cities have passed ordinances that raise the local minimum wage, according to the National Employment Law Project (NELP), an advocacy organization for low-wage workers. San Francisco will raise its wage floor to $15 by 2018, Los Angeles and Seattle will by 2021.

As cities have taken action on the issue, states have pushed back. Legislators in Maine, Minnesota and New Jersey debated bills this year that would have preempted local wage hikes, though none passed.

While labor groups have been arguing for local minimum wage ordinances, business associations have been arguing against them. The American Legislative Exchange Council (ALEC), an organization that supports free-market policies, has drawn up model living-wage preemption legislation.

No municipality in Michigan had been actively considering raising the minimum wage before the state’s new preemption law was signed by Republican Gov. Rick Snyder in June.

But some communities had been considering moves like setting a prevailing wage for work on public construction projects, said Wendy Block, of the Michigan Chamber of Commerce. And business groups were worried that proposals to raise the minimum wage might be looming.

Employers worry that a higher minimum wage will force them to lay off workers and put them on a “high cost island” unable to compete with local communities, Block said.

Michigan Rep. Earl Poleski, a Republican and sponsor of the state’s 2015 preemption law, said the legislation doesn’t take a position on what the minimum wage should be or whether employers should offer benefits. It just clarifies the level of government that should set such policy.

“To have that discussion in every little hamlet in Michigan I think would be really detrimental to fostering a positive business climate,” Poleski said. He said that it’s hard for businesses to expand or plan for the future when they face a conflicting map of local regulations.

In Missouri, language preventing employment ordinances was tacked on to a bill sponsored by Republican Rep. Dan Shaul. Initially, his bill prevented municipalities from meddling with stores’ ability to provide customers with plastic and paper bags. Shaul said he supports the language preempting employment ordinances. “I think that becomes very difficult to navigate as a business person,” he said of local labor laws.

Yet some economists say it may make sense to set a different minimum wage in urban areas. Cities tend to have a higher cost of living and a higher average wage than rural areas. They tend to have a greater mix of occupations.

“It’s completely arbitrary that these things would be determined by state boundaries,” said Daniel Aaronson, vice president and director of microeconomic research for the Federal Reserve Bank of Chicago.

Since the 1990s, economists have been studying what happens along state boundaries when the minimum wage changes on one side. Those boundaries tend to divide economically similar communities, Aaronson said.

Economic theories of supply and demand hold that when the minimum wage goes up, demand for labor should go down — while some people receive higher pay, others get laid off. Most studies still conclude that the least-skilled workers lose their jobs when the wage floor rises, according to a 2006 analysis from University of California, Irvine, economist David Neumark and Federal Reserve Board economist William Wascher.

But when economists study whether a minimum wage increase in one area affects surrounding areas they don’t see big shifts in the level of employment. “At least at the county level, on average, we don’t see major spillover effects,” said Ben Zipperer, research economist at the Center for Equitable Growth, a left-leaning think tank in Washington.

Some studies have shown a limited economic impact to city minimum wage hikes, too. University of California, Berkeley, researchers surveyed San Francisco restaurants before and after the city raised its minimum wage from $6.75 to $8.50 in 2004 and found no effect on employment growth, even though the restaurant industry employs many low-wage workers.

There are caveats to the empirical research, Zipperer cautioned. Unchanging job figures may mask churn — businesses moving in and out of the market, workers moving from job to job. It’s not clear how higher minimum wages affect communities over the long term, or whether a big wage jump would have a bigger impact.

The research suggests that businesses can have a complex reaction to a higher wage floor. There’s evidence that raising the minimum wage raises prices, Aaronson says. Some businesses may invest in tools that decrease reliance on human labor — think self-checkout lanes at convenience stores. Others may simply absorb a drop in profits.

Foes of raising the minimum wage argue that higher labor costs would drive businesses elsewhere. But most minimum wage jobs are local, making it hard for employers to skip town “Most of the low-wage jobs are restaurant or personal service jobs or retail jobs that are by and large linked to their location,” said Paul Sonn, general counsel at NELP, the low-wage advocacy group. When labor costs rise, the need for janitors, home health aides and restaurant workers doesn’t go away.

The Way Forward in Kansas City

Katz said he tried to limit the group discussion in Kansas City to the mechanics of a minimum wage increase. He didn’t want everyone to start arguing about what he considers philosophical questions — like whether a minimum wage has to be enough money to live on.

And despite Katz’s best efforts to keep philosophical differences out of the debate, they permeate discussions of minimum wage policy.

Politicians like Mayor James often frame the debate in moral terms. “Our entire community will suffer as long as there are Kansas Citians who work hard for 40 hours a week and still don’t bring home enough money to provide for their families,” he said during his State of the City address in March.

“I think this is an opening salvo on the issue,” Katz said. “It’s conceivable that what happens here will have an impact on what happens in the next four years around the country.”