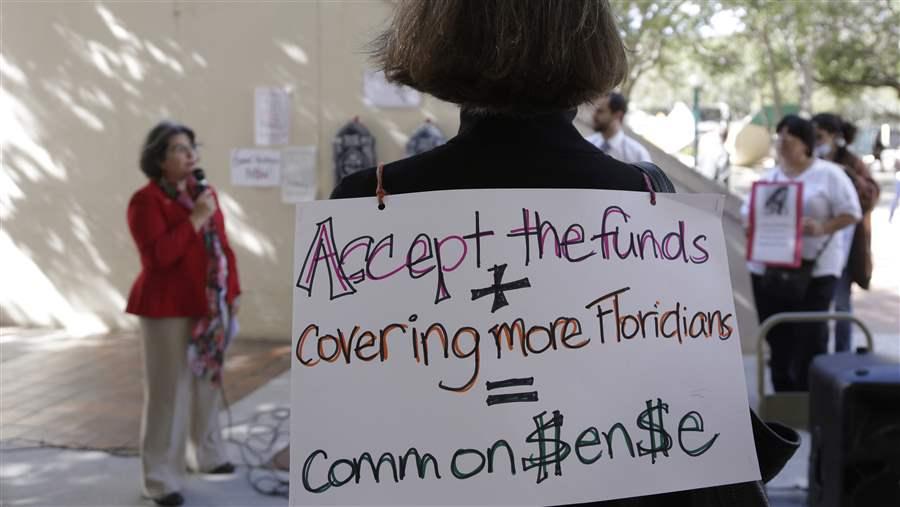 An activist in Miami wears a sign urging Florida lawmakers to expand Medicaid under the Affordable Care Act. Opposition remains strong in the mostly Southern and Midwestern states that have rejected expansion. (AP)

TAMPA, Florida — With its ruling in King v. Burwell last month, the U.S. Supreme Court likely settled the question of whether President Barack Obama’s signature Affordable Care Act will survive. Whether and when the health law will be fully implemented in all 50 states is a different question.

“With the King decision behind us, the drumbeats for Medicaid expansion are increasing,” said Matt Salo, executive director of the National Association of Medicaid Directors. “There is movement in every state. They’ll get there. Maybe not today and maybe not this year, but they’ll get there soon.”

That’s the hope of health care industry groups and legions of consumer advocates. Major business organizations and local and county governments are also onboard. Following the high court’s decision, President Obama vowed to do all he can to persuade states to opt in before he leaves office in 18 months.

But in the mostly Southern and Midwestern states that have rejected expansion, opposition shows little sign of abating.

“We oppose expanding Medicaid because it is a broken system with poor health outcomes, high inflation, inseverable federal strings and no incentive for personal responsibility for those who are able to provide for themselves,” wrote Steve Crisafulli, Speaker of the Florida House of Representatives, in the Tampa Bay Times earlier this year.

So far, 29 states and the District of Columbia have taken the federal government up on its offer to fund all but a fraction of the cost of providing health care to low-income adults not previously eligible for the federal-state program. Among the remaining states, only Alaska and Utah are expected to reach agreement on expansion this year, leaving 19 states where either Republican lawmakers, governors or both are opposed to expansion.

According to the Kaiser Family Foundation, nearly 7 million more people are likely to receive coverage under the health law’s Medicaid expansion if all states opt in to the program. The result would be 4.3 million fewer uninsured Americans in 2016, according to a new White House report. But states with the most to gain have proven to have the strongest objections to accepting federal funding to provide health care for their poorest residents.

The uninsured rates in Texas (20 percent) and Florida (19 percent) are among the highest in the country, according to the Kaiser Family Foundation. In those two states alone, nearly 2 million people stand to gain coverage if state officials expand Medicaid under the ACA.

In addition, poverty rates in most of the states that have declined to expand are higher than the national average, meaning a large percentage of their populations would be eligible for the low-income health plan.

With 16 million newly insured people since the Affordable Care Act took effect last year, the nation’s uninsured rate is at an all-time low. Among adults ages 18 to 64, the population covered by the Medicaid expansion, the uninsured rate dropped from 20.4 percent in 2013 to 16.3 percent in 2014, according to the U.S. Centers for Disease Control and Prevention.

For now, expansion is a nonissue in Texas, but it has been the subject of heated debate in Florida. In June, Republican Gov. Rick Scott called a special session of the legislature after the House of Representatives refused to approve a Senate Medicaid expansion proposal during the regular session. Scott, who previously said he supported Medicaid expansion, now sides with the House in opposing it.

At issue was $1.3 billion in funding to support hospitals that serve large numbers of uninsured people. The U.S. Department of Health and Human Services said it would drastically reduce the funding if Florida did not expand Medicaid. In spite of that, the House voted against expansion and appropriated $400 million in state Medicaid spending to keep public hospitals afloat.

The federal government has also said it would reduce similar hospital funding in Tennessee ($500 million) and Texas ($4 billion) next year. Kansas stands to lose $45 million in federal hospital subsidies in 2017.

In Florida’s case, “Lawmakers’ concerns about future budget pressures from the Medicaid expansion ring hollow, since they were willing to spend hundreds of millions to vote against it,” said Joan Alker, executive director of the Georgetown University Center for Children and Families.

“Nowhere is it clearer than in Florida that Medicaid expansion has become a fight within the Republican Party between the more pragmatic wing and the more ideological wing that wants to say no to the Affordable Care Act at any cost,” she said. 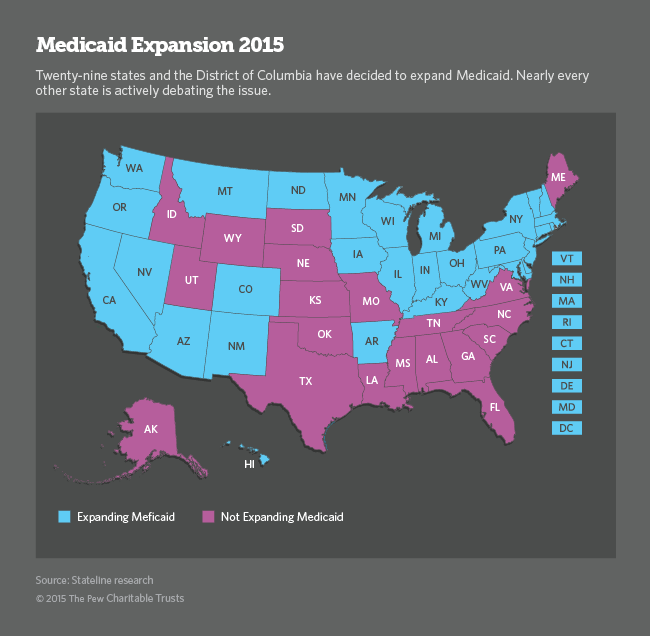 Ever since the Supreme Court’s 2012 decision making Medicaid expansion a state option, the issue has become more political than practical. Despite the offer of billions in federal dollars, Republican politicians have rejected the deal, fearing they could lose their jobs if seen to be cooperating with the Obama administration on a law most conservatives disagree with.

Under the Affordable Care Act’s Medicaid expansion, the federal government pays the full price for covering newly eligible adults with incomes up to 138 percent of the federal poverty level ($16,243 for an individual) through 2016 and then gradually lowers its share to 90 percent in 2020 and beyond, making states responsible for no more than 10 percent of the costs in the future.

But some states worry that even covering 10 percent of the total cost could cripple their budgets, or that the federal government could scale back its contribution. State officials also talk about needing to rein in Medicaid, which has grown faster than any other part of state government.

In a few states that expanded Medicaid in 2014, enrollment did grow faster than predicted. Kentucky’s enrollment, for example, was more than twice what the state had expected. Instead of 147,634 new enrollees, 310,887 had signed by midyear, stirring concerns among opponents in other states about Medicaid’s unpredictable growth.

However, Kentucky and other states documented substantial savings as Medicaid coverage for newly-eligible adults offset a variety of health care costs the states had been paying on their own.

A recent report sponsored by the Robert Wood Johnson Foundation, which advocates for health care, toted budget savings for eight regionally and demographically diverse expansion states, including Kentucky, at $1.8 billion by the end of 2015. Kentucky’s own study estimated Medicaid expansion would improve its fiscal bottom line by $819.6 million between 2014 and 2021.

Still, some states’ concerns about the size of the Medicaid program and their frustration over not being able to control its growth are legitimate, said Len Nichols, a health care economist at George Mason University in Virginia.

Because Medicaid is an entitlement that expands to meet the needs of people whose incomes drop during tough economic times, expenditures for the program often balloon when tax revenue falls and states are least prepared to pay for it. The resulting budget crunch can limit states’ ability to spend on other critical programs such as universities and transportation.

But Nichols and others are quick to point out that the Affordable Care Act’s formula for expansion is a bargain, and if expansions states’ experiences so far are any indicator, the net fiscal impact of extending eligibility to more adults should be minimal, if not positive.

Gov. Bill Walker of Alaska, an independent, has said he intends to expand Medicaid this year and the legislature’s legal counsel confirmed in May that he had authority to do so, preventing the GOP dominated legislature from blocking his plan.

Republican Gov. Gary Herbert of Utah, who has the support of state House Speaker Greg Hughes, has asked a panel of Republican lawmakers to deliver a Medicaid expansion plan they can agree to by the end of this month. Before its session ended, the GOP-dominated House rejected the governor’s plan.

In January, the federal government approved an alternative Medicaid expansion plan proposed by Indiana, underscoring the administration’s willingness to stretch the bounds of federal Medicaid rules to sign up as many states as possible.

Five other states have received federal rule waivers to implement their own versions of Medicaid expansion: Arkansas, Iowa, Michigan, Pennsylvania, and New Hampshire, although Pennsylvania’s Democratic governor Tom Wolf this year called for a transition to a standard Medicaid approach. Under consideration now is a waiver request from Montana, the 29th state to decide in favor of expansion.

In general, GOP-led states have been seeking federal approval for a combination of rule changes that would allow Medicaid enrollees to purchase private policies on an exchange, while requiring them to engage in certain forms of “personal responsibility,” such as paying copayments and premiums, engaging in healthy behavior, seeking employment and, in Indiana’s case, contributing to a health savings account.

In addition to Alaska and Utah, governors in Idaho, Missouri, Tennessee, Virginia and Wyoming have asked lawmakers to approve detailed proposals for expansion. But Republican-dominated legislatures in those states have rejected the governors’ proposals.

Tennessee’s GOP governor, Bill Haslam, may be the first of the group to win approval from lawmakers, potentially adding 292,000 low-income adults to the state’s Medicaid rolls, according to health care experts who track expansion politics. 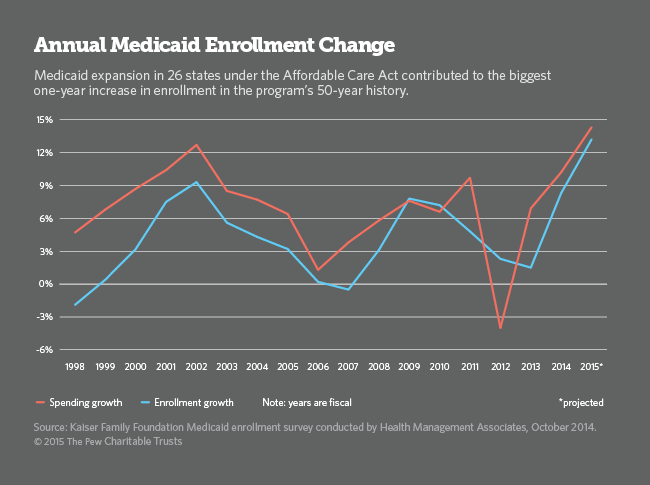 Although the magnitude of today’s political opposition to the Obama administration’s health law may be unrivaled, states’ hesitation to accept federal money to help their poorest residents is not unprecedented.

When Medicaid was first enacted 50 years ago, state acceptance of the new program didn’t happen all at once. Many states were leery of managing such a large program, according to Judith Moore, a retired senior federal government executive who has coauthored a recently published book on the topic, Medicaid Politics and Policy.

“A lot of states simply didn’t have the kind of staff to do something like that,” Moore said. “They needed time to gear up and figure out what kind of people to hire. It was a different kind of state operation than anyone had ever run before.”

At that time, the federal government was only offering to pay about half of the health care bill. The U.S. health care system was not nearly as complex then and health care costs were not a big issue. In fact, Medicaid received little national attention when it was enacted by Congress, along with Medicare in 1965. But for some states already struggling to provide basic health care for poor residents, it was seen as a breakthrough.

Roughly the same number of states (26) signed up for the fledgling Medicaid program in its first year as those that embraced the Affordable Care Act (28) in its first year. In Medicaid’s second year, 10 more states signed up, and by 1970, the last year states could sign up for the federal-state program without a penalty, 48 states had opted in. Alaska demurred until 1972, and Arizona held out until 1982.

The list of states that were quick to agree to the new Medicaid program was different then. But some regional trends persist.

Former Texas Sen. Lyndon Baines Johnson was in the White House, but Southern states were bristling at what they viewed as the federal government’s heavy hand on civil rights issues. Still, Louisiana was on the list of states that quickly opted in to Medicaid, and Texas and Georgia joined in year two. Florida, Virginia and the rest of the South took longer to decide.

“This is a large and diverse country, and the people of the different states have different priorities and even values,” George Mason’s Nichols said. “But math eventually trumps ideology, though at different speeds for different people.”