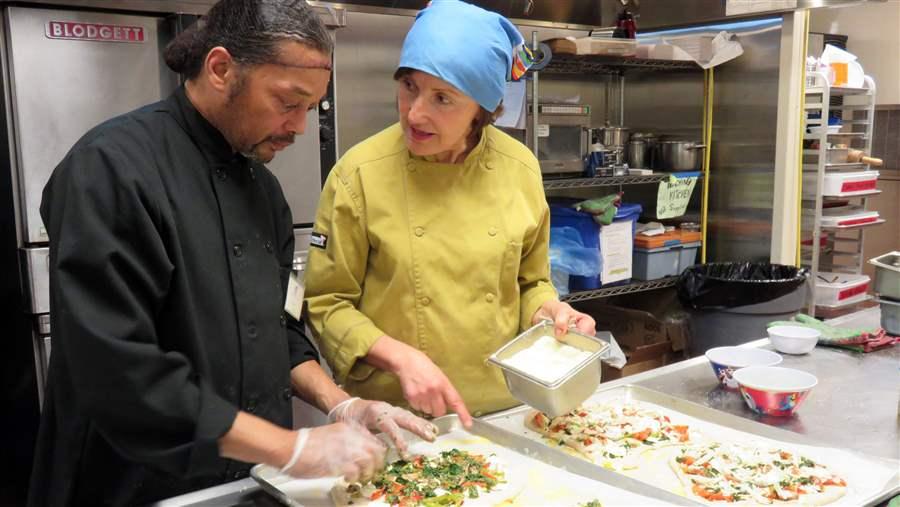 Trainee Dajaun Alexander preps pizzas with chef instructor Susan Logozzo in an industrial kitchen at Community Servings in Jamaica Plain, Massachusetts. Career training programs like this have been shown to vastly improve a person’s chances of staying clean and sober. (Amanda Marsden/Community Servings)

JAMAICA PLAIN, Massachusetts – At 52, Dajaun Alexander says he’s looking for a fresh start. He graduated from a cooking course here last week and has been chosen for a paid apprenticeship. His prospects for a full-time job after that are very good, his chef instructor said.

For Alexander, completing Community Servings’ 12-week course represents a rare achievement in a life punctuated by what he calls “bad decisions.” He is a recovering alcoholic with a history of incarcerations, broken relationships and spotty employment. Cooking, he said, “is my passion.”

It may also be his path to sobriety.

The local food preparation facility where Alexander trained is part of a national program known as Access to Recovery (ATR). The voucher program, launched in 2003 and currently funded at $100 million per year, aims to help low-income people in recovery restart their lives and avoid relapse.

Eleven states receive ATR grants for services from addiction treatment to what is called recovery support.

“Treatment is only one aspect of recovery,” said Rebecca Starr, a senior behavioral health consultant at Advocates for Human Potential and ATR project director in Massachusetts. “You’re still in a terrible neighborhood. You still have no money. And you still need a job,” Starr said. “When someone has completed treatment, we don’t want to put them right back in the same situation they came from and expect a different outcome.”

Because most residents have insurance under the state’s 2006 health care reform law, Massachusetts chose not to use its federal grant money to pay for addiction treatment. Instead, those funds go to what Starr calls a safety net for recovery.

In the greater Boston and Springfield areas, ATR serves low-income veterans, women who are pregnant or caring for young children and adults who have recently been released from jail or prison.

ATR programs vary widely by state. But all include vouchers for necessities like interview suits, sets of tools, car repairs and cellphones. Some participants put the money toward driver’s licenses or high school equivalency tests; others use it to set up a checking account.

In addition to the vouchers, each state has developed a set of services and a target population. Michigan, for example, serves only Native Americans and uses tribal healing methods. Illinois and Ohio focus on adolescents in the criminal justice system. North Carolina works with local universities to help college students with addictions.

According to the U.S. Substance Abuse and Mental Health Services Administration (SAMHSA), the federal agency that funds the state-run programs, “employment is both an outcome and a core component of recovery.”

Massachusetts began offering career training, the project director said, because extensive research showed that finding and keeping a full-time job was the most important indicator of success in overcoming drug and alcohol addiction.

The state’s own study over the last three years shows that participants who found employment were 40 percent more likely to remain sober, find stable housing, rejoin their families and friends, and avoid incarceration during the six-month program. Studies show that employment improves self-esteem, confidence and morale, and decreases the risk of relapse.

Career training was slow to take off as an alternative to vouchers in Massachusetts, Starr said. Because most people coming into such programs lived in disarray, they couldn’t justify giving up vouchers for critical basic needs to work on the longer-term goal of finding a career.

“Then we had an aha moment,” Starr said of the moment she decided to let everyone have the vouchers (close to $900 per person), and opt into the career program separately. Participants were also given a work-study benefit — $8 an hour for attending classes.

Massachusetts set aside a portion of its $8 million ATR grant for training — tuition at Community Servings’ culinary arts program, for example, is $5,000 — and limit the total number of Boston and Springfield residents it could serve.

In its previous grant period, Massachusetts received more than $10 million. Nationwide, more states received grants in 2010 than in the most recent period, which began in September 2014, because SAMHSA has been winding down the ATR grant program and Congress said it would not re-fund it.

But Karen Pressman, planning director at the state Bureau of Substance Abuse Services, says the state will continue the best elements of the program using existing state resources. In addition, state lawmakers may consider appropriating new funds, she said.

“ATR has given us a chance to try out some evidence-based practices and incorporate them into our overall systems for recovery,” Pressman said. “For a long time we’ve known that people recover in many different ways. Treatment is one of those ways, but often people recover through other paths. We wanted to make sure we supported people in whatever path they chose to recovery.”

Career training may not be for everyone in recovery, particularly if they don’t have stable housing, Pressman said. But many people need to get a job right away to pay rent or make court-ordered payments. Allowing people to get paid while they learned new skills helped get more people into the program, she said.

Through its ATR grants, Massachusetts has built an infrastructure of providers like Community Servings who have been trained in how to work with people in recovery. They and others can provide services in the future if the state is able to find funding. Other ATR providers include certified addiction coaches, housing specialists and case managers.

For Alexander, a lanky man with expressive eyes and a timid demeanor, the phone call he got from Community Servings’ training director accepting him into the program may have been the break he needed. “I thanked her a hundred times on the phone and a hundred times more when I met her,” he said.

His eyes welled up when he described the first day of class. “We got a chance to meet the CEO and the executive chef and everyone in the kitchen. Each one talked to us. For me it was inspirational,” he said. In addition to the cooking skills, Alexander said the ATR program has given him “a sense of direction.”

Since he left Boston’s South Bay House of Correction in October, Alexander has been living in a nearby homeless shelter. He’s on several waitlists for subsidized housing. For now, he says his goal is to get a job cooking for the elderly in a nursing home or assisted living facility. “My instructor says I should aim higher. But who’s to say? I could do a job cooking for a little while and I might get recognized as someone who could be an executive chef.”