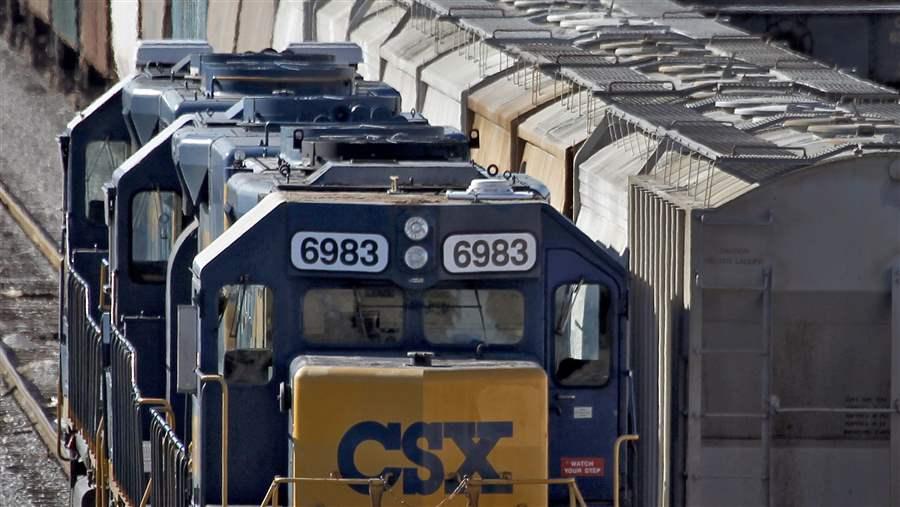 This story has been updated to include arguments presented in Tuesday’s Supreme Court session.

While the case originated in Alabama, at least nine other states impose a full or partial sales tax on train fuel, including Arizona, Florida, Maine, Massachusetts, Minnesota, New Mexico, Oklahoma, Rhode Island and West Virginia, according to the State and Local Legal Center, which keeps track of court cases affecting states. Several of these states and others filed a “friend of the court” brief.

Alabama and the other states contend that they assess all kinds of different taxes—on fuel, on sales, on entertainment, to name a few—and the railroad diesel fuel tax is just another one. CSX Transportation, which sued Alabama to initiate the case, argues it is unfair to single out their mode of transportation with a fuel sales tax.

In Alabama, railroads pay a 4 percent sales tax on diesel fuel, truck drivers (and other motorists with cars that run on diesel) pay a19 cents per gallon excise tax on diesel fuel at the pump (which the railroads don’t pay), and barge carriers pay no fuel tax. In past years, the train and truck fuel taxes each have generated about the same amount of revenue for the state, but the recent decline in fuel prices could change that calculation.

State officials say over the past three years, the railroad fuel tax has brought in between $15 million and $20 million. In addition, counties and municipalities can impose surtaxes on the sales tax, but not on the excise tax.

Carter Phillips, representing the railroad, told the court it’s not that CSX doesn’t want to pay its fair share of taxes to the state. “Let me begin by debunking a statement that gets repeated often in this litigation which is that somehow the railroads are here seeking a ‘most-favored nation opportunity,’” he said.

Phillips said the railroad is not opposed to paying taxes to the state. “We have no quarrel with that, we don’t have any objection to that,” he said. What is discriminatory, Phillips argued, is that Alabama levies a sales tax on train fuel but not on fuel used by trucks and barges.

He noted that while trucks and trains currently pay about the same amount in taxes, regardless of how they are assessed, “Alabama wants to do it in a very simple-minded way: ‘How much are you paying today and how much are they paying today, and if it's close enough, that's good enough for government work.’”

The case, Alabama Department of Revenue et al v. CSX Transportation, turns on lower courts’ interpretation of a 1976 federal law called the Railroad Revitalization and Regulatory Reform Act, known as the “4R Act.” The U.S. appeals courts have split on the issue, sending it to the Supreme Court.

“The 4-R Act does not make railroads the most favored taxpayers.  It instead balances the needs of carriers, shippers and the general public.  Our position in this case does balance those interests and CSX's position does not.  CSX is comparing itself to motor carriers and water carriers, but is not comparing itself to, for example, airlines or pipelines.”

Chief Justice John Roberts sounded skeptical of that argument, saying that the economic viability of the railroads was dependent on how they are “faring with respect to their competitors, not how they’re faring with respect to, you know, an agricultural conglomerate in the state.”

The case centers on the 4R law’s provision prohibiting states from imposing taxes that discriminate against a rail carrier.

“Our position is that Alabama’s tax system does not discriminate against railroads, and we expect the Supreme Court to recognize that reality and rule accordingly,” said Alabama Commissioner of Revenue Julie Magee.

In its court papers, CSX argues that the fuel tax truckers pay is “not a proxy or substitute for the sales tax. The incidence of the two taxes is different, they are not economically equivalent, and they are not designed to make interstate carriers share a common tax burden. Alabama therefore cannot justify its failure to provide the same sales tax exemption to railroads that it provides to motor carriers.”

Alabama counters that states impose taxes differently all the time. “If CSX is right, for example, consider what a state or local legislature is supposed to do when someone proposes a new tax exemption for a railroad competitor,” it wrote in its court brief. “Does that tax ‘discriminate’ in violation of the 4-R Act?”

The friend of the court brief, filed by attorneys general from Arizona, Georgia, Hawaii, Idaho, Indiana, Iowa, Minnesota, Nevada, North Dakota, Oregon, South Dakota, Tennessee, Utah, Washington and Wyoming, asked the high court to allow the separate fuel tax. The brief noted that 45 of the 50 states impose a general sales tax on purchase of “tangible personal property,” but that purchases of fuel for highway use are exempt from the general “sales-and-use tax” in 42 of the 45 states.

“Under current law, the ability of any of these 42 states to impose a generally applicable sales-and-use tax on fuel used by railroads is impeded by the potential exposure to 4-R Act challenges,” the brief stated.

Joe Huddleston, executive director of the Multistate Tax Commission, which represents state tax agencies, and which also weighed in on the case before the high court, said he hopes the court looks at the “total tax base, not a single individual tax.”

“One tax that CSX may pay, another entity may not pay. Does that create a discrimination? We say no. If you are not going to consider the total tax regime, we think this is inappropriate. Everybody doesn’t pay the same taxes,” he said.

The case has followed a circuitous route through the nation’s lower courts and it is the second time the Supreme Court has weighed in. In 2011, the high court agreed that CSX was allowed to challenge the tax as discriminatory, without ruling on its merits.

The case originated in 2008 when CSX filed the first case alleging discrimination in Alabama.  A federal judge initially dismissed the complaint, but CSX appealed to the 11th Circuit Court of Appeals, which upheld the dismissal by the judge. CSX appealed to the Supreme Court, resulting in the initial ruling.

The case was then sent back to the District Court, which held a trial in 2012, resulting in a ruling by U.S. District Court Judge Abdul Kallon holding that Alabama’s sales tax did not discriminate against CSX because the state’s truckers paid roughly the same amount in fuel taxes as the railroad paid in sales taxes. But in 2013, the 11th Circuit Court reversed Kallon’s decision and said the tax did discriminate. The case then went again to the Supreme Court.

Meanwhile, other courts across the country also have weighed in. The 8th U.S. Circuit Court of Appeals, as well as the Supreme Court of Minnesota, struck down state taxing systems similar to Alabama’s. The 5th, 7th, and 9th U.S. Circuit Courts of Appeal held that the correct test of whether similar taxes are discriminatory should be whether the tax is generally imposed on commercial and industrial taxpayers.

Several of the court documents in this case have mentioned that the split in the courts makes the case ripe for Supreme Court action. A ruling is expected next year.

One of Several State Cases

In addition to the railroad fuel case, the high court has gotten involved in several other state-related cases this year, prompting Soronen to label this session the “term of the states.”

Just last month, the court heard arguments in a Maryland tax case to decide how income can be taxed by one state when it is earned in another. A Maryland couple brought the case, arguing that although the state offers a credit to taxpayers on their Maryland income tax bills for taxes paid to another state where the income is earned, it doesn’t do the same for county taxes, which effectively tax the income twice.

And in another state issue, the court heard arguments last month in a redistricting case also out of Alabama, Alabama Legislative Black Caucus v. Alabama and Alabama Democratic Conference v. Alabama over whether there has been gerrymandering with the intent of diluting the political power of black voters.

The high court also heard arguments in October in the case of Heien v. North Carolina, which revolves around the question of whether a traffic stop is permissible under the Fourth Amendment when it is based on an officer’s misunderstanding of the law.