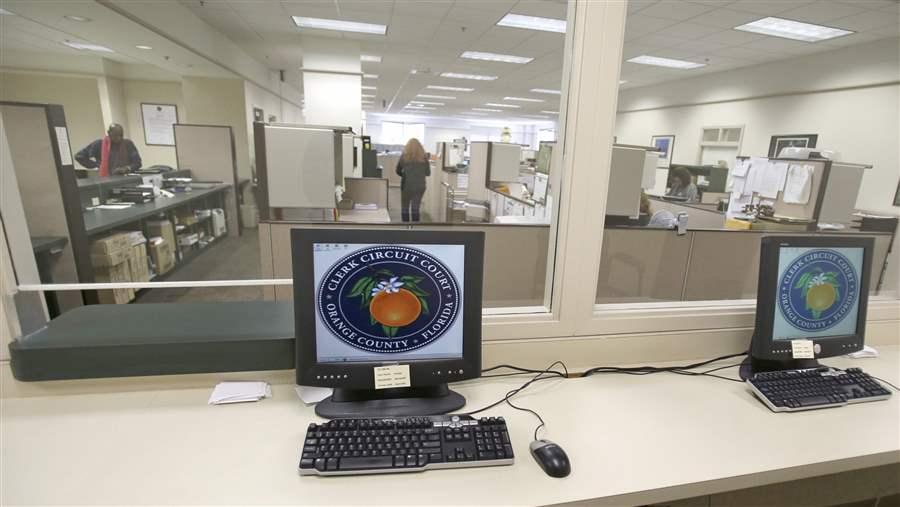 Reporters can access public records on computers at the Orange County, Florida courthouse in Orlando. Many courts across the country are moving to paperless systems in an effort to save money and increase efficiency. (AP)

If you walked into a courthouse a decade ago, you might have seen file clerks pushing carts and searching for case folders, paralegals lugging stacks of paperwork to the clerk’s office and staffers entering mounds of documents by hand into a computer system, if there was one.

That picture has been changing dramatically in many courthouses across the country. States are moving to systems in which documents are submitted electronically, file rooms are disappearing and the judicial system is going paperless.

“We’ve got 50 states and everybody is doing some kind of e-filing project. That was not true even at the beginning of this year. It’s really exciting,” said Jim McMillan, technology consultant for the National Center for State Courts (NCSC).

McMillan said that filing court records electronically not only makes it easier on staffers and attorneys, but frees up space and saves taxpayers money.

A 2009 study in Manatee County, Florida, for example, found that e-filing more than 2 million documents a year saved nearly $1 million.

So far, at least two dozen states have implemented statewide e-filing for attorneys, mostly for civil cases, according to the NCSC. The others are in the process of making those changes.

In the virtual courthouse, documents are either filed electronically or scanned into the system and judges can download case information to their laptops in the courtroom.

“This is a huge change,” McMillan said. “You are affecting every single person who works in the courthouse and everyone in the legal profession. We’re moving away from building the Model T to using robots at the Tesla factory.”

For years, courts had been resistant to digitizing because of the enormous start-up costs. But as the price tag for computer systems dropped dramatically in the 2000s, courts began getting on board.

Some used electronic systems for docketing—listing cases and their status. Lawyers and the public were able to log onto a computer at the courthouse and find information about a case. But in most states, documents could not be filed or retrieved electronically.

Today, states are at various stages of creating a paperless court system. A small number, including Wisconsin and Nebraska, mandate that all civil and criminal cases be e-filed statewide, according to the NCSC. Others, such as Idaho and Illinois, are just getting started on their electronic systems.

States are taking different approaches to the changeover, depending on how their courts are structured. In many states, each court is independent and funded by the county, so connecting to a central hub is a more complex task. Other states directly fund and run the courts, making it easier to create one electronic system.

Courts have paid for new e-filing systems in a number of ways. Some have gotten money from the legislature. Others have boosted filing fees. Some have developed public-private partnerships that allow vendors to require up-front transaction charges and credit card fees for users.

Texas is the largest state to require e-filing. While some of its courts have been using electronic documents since the 1990s, the state Supreme Court stepped in two years ago and mandated e-filing for all civil cases statewide on a rolling schedule.

David Slayton, administrative director of the Texas Office of Court Administration, said that as of early November, courts in 109 counties were e-filing, and the rest will be on board by July 2016. “We can now see cases from start to finish that never touch paper,” he said.

Although Texas’ court system is decentralized, officials decided to use a single portal, a central hub that will allow the courts and filers in all 254 counties to link to one website where documents are filed. The portal sends e-filings on to clerks across the state, but each of the offices retains its individual docket and document management systems.

Texas signed a four-year, $18 million-a-year contract with a vendor to develop and operate the system. To cover that cost, the state charges a $20 fee per case. The contract also covers the cost of a public document access system that will be up and running in late 2015.

Slayton said that one of the biggest problems has been helping judges adjust to the new way of doing business.

“They’ve been used to dealing with paper. Now they have to read documents online and make rulings,” he said. “Some have embraced it and say it’s the most wonderful thing. Some have been somewhat resistant.”

Slayton said that other challenges include ensuring that the network doesn’t experience any major technical glitches and helping counties that don’t have the appropriate hardware or software link to the portal.

“It’s been an adventure. But it’s gone remarkably well,” Slayton said. “All the different elected officials – the court clerks, judges, county administration officials and legislators – have united together because they think it’s the right thing to do for the citizens and the users of the court.”

One state that has been a pioneer in judicial electronic record-keeping is Utah, which has totally revamped the way its centralized, statewide court system operates.

The state has created a virtual courthouse, in which everyone can access information about civil and criminal cases through a fee-based online service. And file rooms essentially have disappeared because the e-filing system has been fully integrated into the docket and document management systems.

The Utah Administrative Office of the Courts made the transformation after its budget was slashed during the recession, said IT division director Ron Bowmaster.

“We knew when we started getting our budget cut that we couldn’t continue doing business the way we always had. We had to change our business model,” he said. “We needed to have a much more efficient system.”

So they decided to move to a paperless court, and Utah’s Judicial Council adopted a rule change requiring all attorneys to file civil cases electronically starting in April 2013. The Council mandated electronic filing for criminal cases beginning next month.

The legislature didn’t appropriate any additional money for the changes, which came out of the state court’s $5 million IT budget, Bowmaster said. E-filers don’t have to shell out money for special fees, but vendors may charge to sell filing services to attorneys. The court does not pay the vendors and they don’t pay the court.

Bowmaster said the shift to electronic records allowed court officials to strike a deal with the legislature.

“We said, we won’t ask you for any money if you leave us alone. Don’t raise or cut our budget. We’ll live with what we have,” he said. “The legislature agreed to that.”

“They were no longer like data entry operators. They were more like quality control operators,” Bowmaster said.

So the state revamped its personnel system and reclassified job descriptions. It started to hire staffers with college degrees or paralegals, rather than high school graduates.

Bowmaster said that the number of court employees has dropped 11 percent since 2009, when the recession peaked. “We now have fewer staff, but they’re more capable and higher paid,” he said.

With the move to electronic records, less space was needed to store paper files. At the Summit County courthouse, two storage rooms were cleared out and turned into a new courtroom.

Like Texas, Utah’s shift to electronic records has had a major impact on all the players involved in the judicial system.

“It’s a complete culture change to a legal system that’s been in place for 100 years,” Bowmaster said. “It affects not just the bar and the court, but the judges. They were used to making notes on a piece of paper and having the file retrieved prior to the hearing. All of that changed overnight.”

Today, Utah judges don’t have to bring paper into the courtroom. Instead they use laptops, iPhones, iPads and other devices.

“We just couldn’t afford not to move forward,” Bowmaster said. “Taxpayers and the public just wouldn’t stand for that.”

Bumps in the Road

Not every court technology modernization project has gone smoothly.

In California, it turned into a fiasco when officials tried to create a centralized, statewide electronic system for the 58 trial courts a few years ago. The state spent $500 million on the effort.

“It blew up in their faces and they had to shut down the project,” said Bill Raftery, an NCSC analyst. He said California tried to make one system do too many things, and the scope was too large to deal with the variety of courts, requirements and organizational structures.

Other states, including Oklahoma and Maryland, also have experienced stops and starts when they’ve attempted to upgrade their court technology.

The NCSC’s McMillan said that in general, states with centralized courts fare better because they already have the infrastructure and they’re able to take advantage of “economy of scale” pricing.

But sometimes states with decentralized courts can be innovative and successful, he added.

He points to Florida, where each of the 67 counties has independently elected clerks who run their own offices. The legislature mandated e-filing in 2008 and the Florida Supreme Court set standards the following year. In 2010, the clerks started developing a single statewide web portal, which they now operate. It has cost them about $5.8 million so far.

Anyone who e-files a court document in the state goes through that portal. The project is subsidized through a service charge for users. Each clerk’s office maintains its own case management system. But the clerks are developing a way to modify those systems to allow any e-documents that can be viewed at the courthouse to be available online and accessible to attorneys and the public by 2016.

“We’re going to have a complete digitized court system, which will include all of the court records, except for those that are exempt by law (such as cases involving juveniles),” said Palm Beach County Clerk & Comptroller Sharon Bock.

Bock concedes that there are still problems with some “recalcitrant attorneys” who insist on using paper documents, despite the Florida Supreme Court’s mandate that they all e-file civil and criminal cases.

“They are ignoring the Supreme Court order. They could be sanctioned for this,” she said. “They just don’t want to do it. Some are working with shoestring technology, using ancient computer systems.”

But Bock said that’s the exception. For the most part, she said, the state is successfully moving to a virtual court system, which has improved efficiency and saved hundreds of thousands of dollars in Palm Beach County alone. She said her staff has dropped from 900 a decade ago to 750.

“We were able to get rid of our file rooms and perform with less people,” she said, noting that law firms also benefitted because they no longer have to send runners to the courthouse or pay for parking and other expenses. “It’s truly a win-win for everyone.”