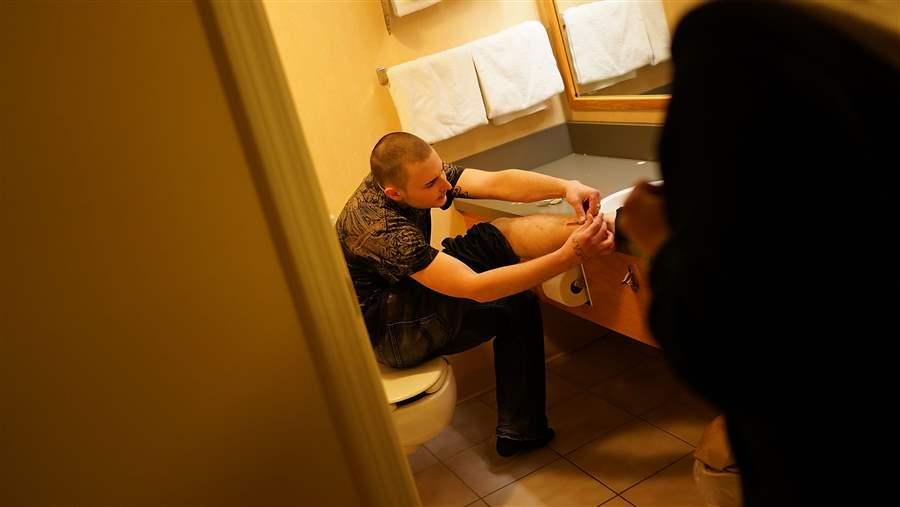 A heroin user in St. Johnsbury, Vermont. In 2013, Vermont opened its first Medicaid health homes specifically for those addicted to opiates, such as heroin. Health homes are intended to coordinate physical and mental health treatment for “super-utlizers” of health care. (Getty)

In health policy circles, they are called “super-utilizers,” but the name isn’t meant to connote any special powers. Just the opposite.

They are people whose complex medical problems make them disproportionately heavy users of expensive health care services, particularly emergency room treatment and in-patient hospitalizations. The cost of treating them is huge: Just 5 percent of Medicaid’s 68 million beneficiaries account for 60 percent of the overall spending on the program.

Using a provision of the Affordable Care Act, many state Medicaid agencies are trying to diminish use of medical services by super-utilizers by better managing their care. The goal is to not only reduce costs, but to achieve better health outcomes for these patients.

Under the ACA, Medicaid for the first time will reimburse health care providers to coordinate the care of patients who have more than one serious chronic health condition, such as diabetes, congestive heart disease and dementia, or who have a serious mental illness or a substance abuse addiction.

In return, the federal government provides 90 percent in matching funds for care coordination and case management for the first two years.

To find eligible patients, the health homes turn to state Medicaid claims data or rely on provider referrals. Neither avenue violates federal medical privacy provisions, according to Lorie Martin of the Center for Health Care Strategies (CHCS), a nonprofit health policy resource center. The health homes also know the eligibility criteria and are able to identify those walking through their doors who fit the profile.

To date, these health homes have a combined enrollment of over 1 million patients, according to the federal Centers for Medicare and Medicaid Services (CMS).

Although most states have not been operating health homes long enough to report on outcomes, Missouri, which was first to establish health homes in 2012, has achieved measurable results.

About 20,000 Missourians with severe mental illnesses are enrolled in health homes geared to the treatment of behavioral health. Dorn Schufmann, until recently the coordinator of the health home model in the Missouri Department of Mental Health, said enrollees with co-existing conditions such as hypertension, cholesterol, obesity and diabetes have experienced dramatic improvements in those areas.

After just one year of operation, he said, the program saved nearly $3 million by keeping enrollees out of hospitals and emergency rooms.

Several studies have demonstrated that a high proportion of those super-utilizers have multiple chronic health conditions, with a particularly high incidence of serious mental illness or substance abuse.

“Mental illness is nearly universal among the highest-cost, most frequently hospitalized beneficiaries,” CHCS reported in 2010, “and similarly, the presence of mental illness and/or drug and alcohol disorders is associated with substantially higher per capita costs and hospitalization rates.”

A recent report published last month by Rutgers Center for State Health Policy confirmed those results. More than 80 percent of the New Jersey Medicaid enrollees who were identified as having frequent emergency room visits or hospitalizations had behavioral health conditions compared to only 25 percent of those who were not high users.

Forty-four percent of frequent users were diagnosed with a serious mental illness compared to only 9.6 percent of those who were not considered frequent users. (In the study, super-utilizers were identified as having four or more in-patient hospital stays or six or more emergency room visits over the course of four years.)

“The reason this likely happens is that a lot of research shows if a person has mental health or substance abuse problems, that can cause problems in other conditions,” said Sujoy Chakravarty, lead author of the Rutgers report. “For example, substance abuse could cause complications in the treatment of diabetes, such as not taking medication or visiting the doctor.” By not seeing to these chronic medical conditions, they worsen and invariably end in emergency rooms or hospitalizations.

Even in the general population, coordination between physical and mental health treatment is the exception rather than the norm. Private insurance plans, for example, often contract mental health services out to a third party, and providers usually don’t communicate at all.

“One thing this clearly underscores is that the treatment for physical problems and behavioral problems should go hand and hand,” said Chakravarty.

The Rutgers study suggests that New Jersey could save tens of millions in Medicaid spending with better coordination of care for the seriously mentally ill. Under CMS rules, to be eligible for enrollment in a health home, patients must have at least two chronic conditions, one chronic condition and at risk for another, or a serious mental illness or substance use disorder.

While some states have health homes catering to anyone who meets any of those criteria, others aim for more targeted populations. For instance, Ohio’s health homes are geared only for those with serious mental illness.

In Wisconsin, participants must have HIV/AIDS plus one other chronic condition. Missouri has health homes specifically for the mentally ill and others for those with at least two chronic conditions.

In Vermont, which is reeling from a surge in opioid and heroin use, the health homes are designed specifically for those with an opioid dependence and candidates for medical assisted therapies, such as methadone and buprenorphine.

Barbara Cimaglio, Vermont’s deputy health commissioner for alcohol and drug abuse programs, said that while the health homes offer the substance abuse treatments expected in such programs, each also has on hand a primary care nurse and case manager who screen patients, connect them to appropriate medical providers in the community and monitor their care.

Vermont began establishing the health homes in January 2013. Cimaglio expects that data from 2014 will help Vermont assess their effectiveness. The state already has data showing that health care costs for people who use anti-addiction medicines to combat their addictions are three times as high as other Medicaid recipients.

It is not a population that devotes much time to preventive health care. “Many don’t have a medical provider and haven’t had health care for a long, long time,” Cimaglio said.

Missouri’s Schufmann believes Vermont and other states with health homes will be pleased when they start analyzing the data. “This is one of the best programs I’ve ever been associated with,” he said.