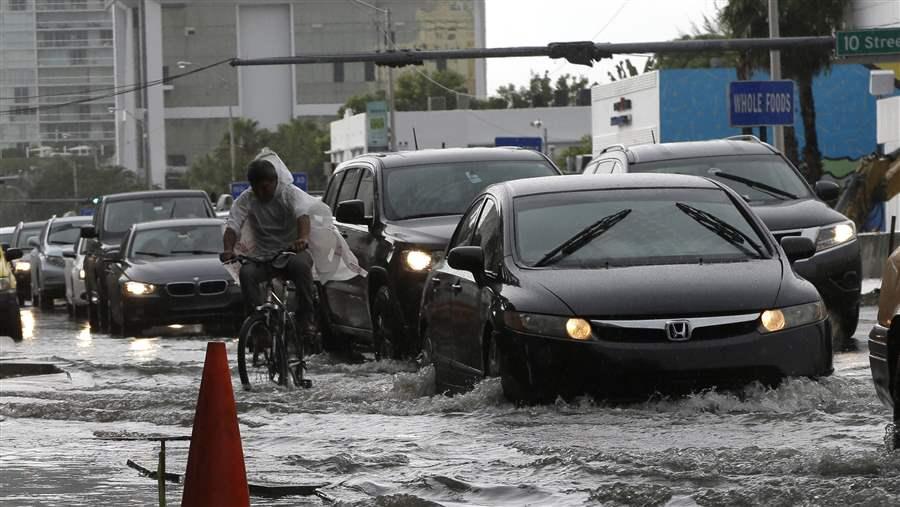 A cyclist and vehicles negotiate heavily flooded Miami streets last September during heavy rains and high tides, illustrating the city’s vulnerability to rising sea levels. Florida is among several states and communities that have begun to address the concrete effects of global warming. (AP)

SAN FRANCISCO – Eroding beaches and the seawater that laps onto the Embarcadero waterfront during high tide—not to mention severe storm flooding—were sending a clear message to a city surrounded by water on three sides.

San Francisco responded in September, when its Capital Planning Committee decreed that in all future construction projects, city and county agencies, including low-lying San Francisco International Airport, must acknowledge the rising sea level and come up with plans to adapt. The sea level around San Francisco rose nearly 8 inches during the last century, and it is projected to rise by as much as 55 additional inches by 2100.

In addition to trying to curb the carbon emissions that accelerate global warming, many state and local officials around the country have begun to address warming’s concrete effects, from rising seas to more extreme weather. In the face of resistance from climate change skeptics, their efforts are producing progress, from improved drainage and storm water systems to elevated infrastructure.

San Francisco’s decree is rooted in science-based assessment of the city’s vulnerabilities, said Debbie Raphael, director of the San Francisco’s Department of the Environment. “Our approach is not simply to build a wall and think the problem is solved, but to explore all options, including looking to nature for solutions, like wetlands.”

California has instructed all of its state agencies to prepare for a rise in sea level and other warming effects, and four regional groups work on projects across jurisdictions. The state has developed guidelines for transportation planners and coastal communities, and in September, Democratic Gov. Jerry Brown signed legislation creating a Sea Level Rise Database as a clearinghouse for adaptation strategies from across the state.

California’s attention to the issue might be expected, given the state’s geography and political orientation. But climate change is also emerging as an issue for state and local officials in more surprising places.

“Today the change is to adaptation, because we see climate change coming so quickly,” said Mayor Jim Brainard of Carmel, Indiana, who served on a White House panel studying state and local climate change needs.  “Local communities have been working at it very hard,” but are stymied by tight budgets, Brainard said. Carmel recently resorted to a $4.95 per household monthly fee to pay for upgrades to its storm water system.

Regional alliances have cropped up, notably in low-lying south Florida, which expects to be dramatically affected by rising seas. In 2010, Palm Beach, Broward, Miami-Dade and Monroe counties formed the Southeast Florida Regional Climate Change Compact to plan for an expected sea rise of as much as two feet by 2060.

Miami Beach already is reaping flood-control benefits from new storm water pumps and upgrades that are part of a $400 million plan to fight encroaching tidal waters and storms that flood city streets. The city also requires a minimum elevation of 5.7 feet for new sea walls, up from the previous 3.2 feet, and is elevating some of its roads.

Several states are promoting “living shorelines,” wetlands and natural landscape features that can provide a buffer against seawater incursion.  Chicago and other localities are using greenscapes and permeable paving to reduce storm runoff flooding. In many places, state and local transportation departments are evaluating roadway vulnerability, and some already incorporate climate analysis into construction design.

“We have made rapid progress in a short amount of time,” said Steve Adams, climate adaptation director at the nonprofit Institute for Sustainable Communities. Adams said adaptation used to carry a whiff of defeatism, but not anymore. “It’s astonishing how clear it is in 2014 that climate change adaptation, or resilience, is really an idea in good standing, where the conversation in 2008 or 2009 was just beginning to emerge.”

The state and local adaptation steps range from sweeping mandates to shovel-in-the-ground projects:

It is difficult to calculate how much states and cities are spending on climate change adaptation because the money frequently is folded into other projects, such as infrastructure upgrades. Furthermore, local officials are making pragmatic adjustments to projects that go beyond formal plans and state mandates.

“Folks like me who are building facilities to last 100 years can’t afford not to weigh all the factors,” said Fred Buckenmeyer, public works director of Anacortes, Washington. Buckenmeyer said he incorporated protective features into a $65 million redesign of the city’s aging water treatment plant after learning it will be increasingly vulnerable to flooding and sediment from the adjacent Skajit River.

California Democratic Assemblyman Rich Gordon, a leading advocate for adaptation action and strategies, saw enormous significance even in the modest $2.5 million added to the state’s Climate Resiliency Account as part of California’s latest budget deal. The money will help coastal communities prepare for sea-level rise and other climate-related events, and it demonstrates that policymakers are recognizing the seriousness of the “slow moving emergency,” he said.  “There is an awareness increasingly among elected officials,” Gordon said.

A Long Way to Go

Not everyone is on board, however. A study by the Georgetown Climate Center at the Georgetown University Law Center found that fewer than half the states have adopted state-led adaptation plans, or even have similar work in progress.

In North Carolina, for example, the state Senate made national headlines in 2012 when it sought to bar state officials from considering accelerated sea-level rise in coastal planning. Eventually, lawmakers approved a four-year moratorium on sea-level regulations and ordered a new study of sea-level rise, which is scheduled to be completed in 2015.

“There’s conflicting science on these issues. It’s not settled and I don’t think the government needs to be getting into this business and restricting what people can do on their own property based on computer models,” said Republican state Sen. Jim Davis. “It’s a futile effort. It’s a way to spend a lot of money and we don’t know the result.”

But Aaron Ray, a policy analyst at the Georgetown center, said an increasing number of cities and states are concerned enough to take action. “There’s certainly a long way to go, but we think states are recognizing the need to make those changes and are doing that,” Ray said.

State and local officials are calling on Washington for more help, and the White House in recent months has rolled out some grant programs and support, including a Web-based toolkit for local officials. A White House task force of state, local and tribal leaders issued a litany of climate resilience recommendations in November. Among other things, they call for simplifying the multiagency federal maze that local officials have to navigate for project approvals and funding.

“We know what we have to do. We know what our resources are, what our vulnerabilities are and how each level of government begins to kick in, “ said Des Moines Mayor Frank Cownie, a Democrat and member of the White House task force. “We are responding to extreme weather events and floods. The ambition is to reduce our risk.”

Federal agencies can coordinate and assist, Cownie said, but many state and local officials are not going to wait for Washington’s help, especially given the gridlock on Capitol Hill. “It would be foolish for us to sit back and assume that the federal government will step up if it’s bad enough,” Cownie said.