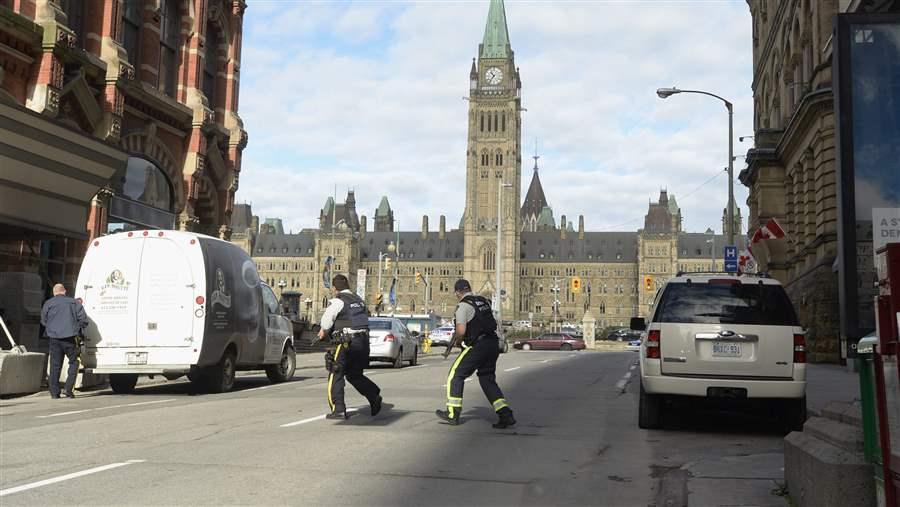 Police secure the scene of a shooting on Parliament Hill in Ottawa on Oct. 22. The shooting in Canada has officials in state capitols in the U.S. examining their security procedures. (AP)

Security at statehouses is as varied as the legislatures housed within them. Some capitols have metal detectors and screen visitors. Others offer open access, and some allow people with permits to carry their firearms inside the building.

Despite the differences, lawmakers, staff and security at all 50 state capitols participate in the same balancing act year after year: They prepare for potential disruptions or attacks, while trying to keep the buildings reasonably accessible to the public, as is specifically required in some states’ constitutions.

In the wake of the shooting attack on the Canadian Parliament in October, the issue is likely to receive more attention from state lawmakers when they return to work next month. In some states, statehouse security is a matter of state law, and legislators must approve any changes and the money to pay for them.

“After Ottawa, everyone does an immediate assessment of what it means to them,” Terrance Gainer, former sergeant-at-arms for the U.S. Senate and an adviser at Securitas USA. Gainer spoke at a panel on capitol security held at the winter forum of the National Conference of State Legislatures (NCSL) in Washington. “Openness and security, that’s the balance.”

Anthony S. Pike, head of Virginia’s Division of Capitol Police, echoed that view. Pike said he knows who is in charge of his building’s air duct system in case it needs to be shut down in an emergency, and Virginia evaluated nearly two-dozen statehouses to see how Richmond’s security stacked up. But officials try to ensure safety while making sure visitors feel like “they’re not coming into Fort Knox,” he said.

There has been a consistent march toward enhancing security at state capitols since the Sept. 11 terrorist attacks. The 2011 shooting of U.S. Rep. Gabrielle Giffords, an Arizona Democrat, outside a Safeway grocery store in suburban Tucson prompted more questions about the safety of lawmakers.

Pennsylvania recently approved an upgrade to the statehouse security systems it put in place after Sept. 11. The plan will cover keycard technology, additional cameras and other measures. Connecticut also boosted security at its capitol this past year, and Michigan debated doing the same. In Minnesota, the incoming Republican House majority  added crisis management to the job description for the chamber’s new sergeant-at-arms.

However, in Minnesota a panel rejected a proposal to ban concealed-carry permit holders from bringing their guns into the state’s capitol building.  And in response to a lawsuit, Wisconsin officials this year reopened a public capitol entrance that had been closed since the 2001 terrorist attacks.

According to the most recent NCSL survey, 19 state capitols have no security guards at public entrances, and only 21 states post armed guards at entrances.

Yet there are some with much stricter procedures in place. Eleven states use X-ray machines at public entrances to screen those who enter, and at 14 state capitols, guards use metal-detecting wands to screen visitors.

State handgun and public access laws—and broader cultural and political sensitivities—account for some of the variation.

One example is Texas, which has a vast capitol complex with several buildings connected by underground tunnels. Rod Welsh, sergeant-at-arms for the Texas House, said his state has come a long way from the situation three decades ago, when the building was almost entirely open and accessible 24 hours a day.

“Now we’ve progressed to the point where we’re probably one of the more secure capitols in the country,” Welsh said.

But security is in the eye of the beholder. Texas employs metal detectors at its entrances. But it also attracted national headlines last year by allowing those with concealed-carry permits to bypass the time-consuming metal detector process. According to reports, dozens of lawmakers carry their weapons in the Texas Capitol.

Such a state of affairs is unthinkable in other states, even those with plenty of gun enthusiasts. In North Carolina, for example, only on-duty law enforcement officials are permitted to carry guns inside the statehouse. Martin Brock, a police lieutenant with the General Assembly Police Department, said the issue of guns in his capitol is something that “keeps me up at night.”

Still, he said the prohibition on firearms is difficult to enforce because officials don’t screen those entering the building. Because of that, Brock said, he and other officers are left to monitor visitors for suspicious activity and react if a situation should arise, just like law enforcement does anywhere else.

“Access is so critically important. Our North Carolina Constitution specifically says that people have the right to go to our legislature,” Brock said. “That’s always going to be a balance, how do we provide the appropriate level of security while still protecting people’s rights?”

In recent years, states such as North Carolina, Texas and Wisconsin, have been tested by high-profile protests in their capitol buildings. Though there were some arrests, for the most part the public retained access to those buildings, even while lawmakers were in session.

Gabe Rottman of the American Civil Liberties Union said concerns about access to government buildings, especially for protesters, have surged in recent years. He pointed to the high-profile examples from Wisconsin and elsewhere and, more recently, the demonstrations regarding the police killings of unarmed black men in Ferguson, Missouri, and New York City.

“If you’re talking about state capitols, there’s no question that there are legitimate security interests,” he said. “The key issue is when it comes to your First Amendment right to access.”