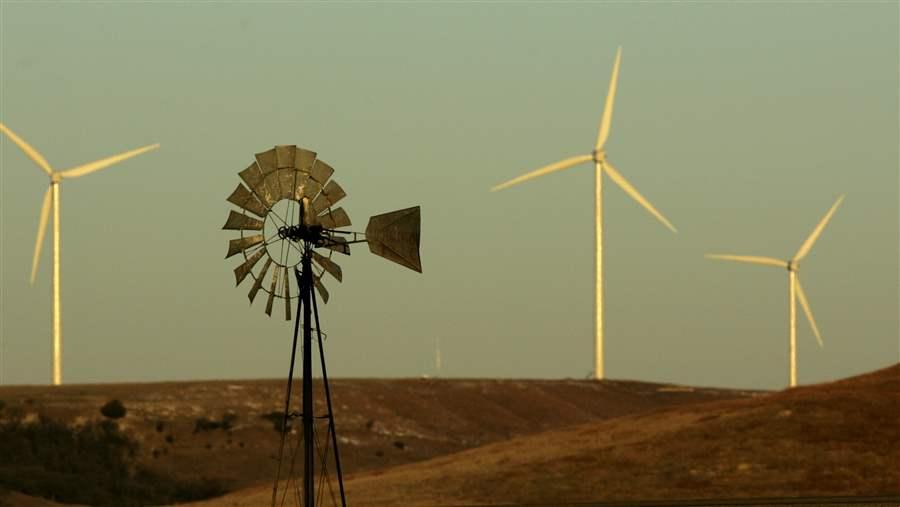 An old windmill stands in front of a row of 260-foot-tall wind turbines at the Smoky Hills wind farm near Lincoln, Kansas. In Kansas and other states, the green energy industry has used its growing clout to push back against efforts to repeal laws that require utilities to generate more electricity from wind, solar and other renewables. (AP)

Earlier this year, Ohio became the first state to freeze a scheduled increase in the amount of electricity that must be generated by wind, solar and other renewable sources. The move gave advocates of repealing states’ mandatory green energy standards a rare victory after defeats the last two years.

But the Ohio victory may have been an aberration: Green energy industries have become mainstream businesses with the political clout to match the fossil fuel industry and big electric utilities in many statehouses, and they are using that influence to defend the renewable energy standards in place in 31 states and the District of Columbia.

Green industry is creating jobs, providing lease payments to landowners and taxes for local government in many states. Companies like Siemens and GE are highly invested in green energy. And many state lawmakers don’t want to see the economic benefits shrink or disappear.

Wind represents about $118 billion in private investment in the U.S. economy and sustains about 73,000 jobs, according to the American Wind Energy Association. About $17.3 billion a year is invested in new wind farms.

The solar industry, meanwhile, employs about 143,000 people and pumps nearly $20 billion a year into the economy, according to the Solar Energy Industries Association.

The economic impact of the fossil fuel industry is much larger, but Tom Plant of the Center for the New Energy Economy at Colorado State University noted that green energy has “become mainstream … and a pretty significant component of economies of the states.”

Nevertheless, Ohio’s action gave hope to repeal advocates like John Eick of the American Legislative Exchange Council (ALEC) that other states will follow this coming year and slow or modify the mandates, if not repeal them outright.

“It (Ohio) may have laid the groundwork for other states to move in this direction in the coming year,” said Eick, director of the task force on energy, environment and agriculture for ALEC, the free-market think tank of state lawmakers and private industry that drafted model repeal legislation.

State renewable portfolio standards are an outgrowth of the energy deregulation movement of the 1990s and rising concern over the environmental damage caused by greenhouse gases.

The standards require utilities to sell an escalating amount of power generated by renewable or alternative fuels, which can vary from wind and solar to biomass, geothermal and hydroelectric. Many states also require greater energy efficiencies as part of the package.

Ohio’s 2008 law required utilities to gradually phase in the purchase of renewable, alternative and emerging energy technologies until it comprised 25 percent of their electricity output by 2025. It also mandated a 22 percent reduction in consumption by then. 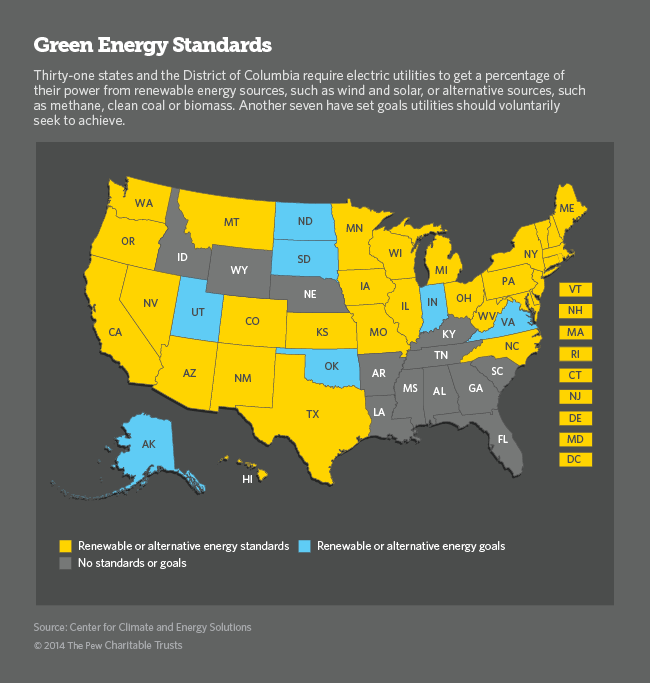 The mandates are now frozen until 2017 while a legislative commission studies whether the standards contribute to rising electricity rates and should be altered.

How much electricity must come from renewable sources varies across the states. California, for instance, requires 25 percent by 2017 and 33 percent by 2020, according to a database kept by the North Carolina Clean Energy Technology Center in conjunction with the U.S. Department of Energy. Connecticut requires 27 percent by 2020.

Although debate rages on how much the mandates cost ratepayers, a survey in May by the National Renewable Energy Laboratory calculated that from 2010-2012 they drove up rates by 0.9 percent.

Battles over the portfolios heated up two years ago after ALEC drafted model legislation to roll back or repeal them because, Eick said, “government entities shouldn’t distort the energy markets with mandated quotas favoring one source of power over another.”

Eick’s task force, which drafted the legislation, now comprises 130 state legislators from across the country and about 50 companies, including fossil fuel producers and investor-owned utilities.

Although the task force has no renewable energy companies as members, Eick said, ALEC isn’t anti-green energy. The group doesn’t favor any one source of energy, he said. Nor is it opposed to voluntary renewable goals. But, he said, the markets shouldn’t be distorted, and electric customers shouldn’t have affordability and reliability put at risk by government intervention.

Twenty-six bills to roll back or repeal the mandates were introduced in 2013, after Republicans won a large number of legislative seats in the 2012 election, according to tracking by Colorado State’s Center for the New Energy Economy. None passed. Just 14 were introduced this year. Only Ohio rolled back in a significant way.

Ohio’s freeze, approved by the Republican legislature, was signed by Republican Gov. John Kasich in June after he first threatened to veto a rollback.

In addition to ALEC, the utility First Energy and the Ohio Chamber of Commerce pushed for the rollback. On the other side, the Ohio Manufacturers Association and companies like Whirlpool and Honeywell opposed the rollback. Wind energy accounts for about 5,000 jobs in the state, the Environmental Defense Fund said.

Wind, solar and other alternative sources are increasingly popular with the public compared to fossil fuels, polls indicate. And many companies want to demonstrate they’re in favor of environmentally friendly policies.

If there’s any state that could follow Ohio’s lead this coming year, Eick said, it is Kansas, where standards mandate 20 percent renewables by 2020.

Efforts to first repeal and then phase out the standards were defeated in the House this year after winning overwhelming Senate approval. The repeal’s sponsor, Republican Rep. Dennis Hedke, said it’s too early to say whether he will push again.

But the climate would appear ripe, especially now that Republican Gov. Sam Brownback says he supports phasing out the standards after previously remaining silent on the issue.

Kansas is home to energy giant Koch Industries, which backs ALEC and Americans for Prosperity, whose state chapter favors repeal. The state is the nation’s 10th biggest producer of oil and home to the Hugoton natural gas fields. And, according to the Energy Information Administration, 61 percent of the state’s electricity comes from coal plants.

However, wind energy has a foothold in the state and accounts for about 19 percent of electricity generation. The industry has made an $8 billion capital investment in the state, accounting for some 13,000 jobs, said Karin Brownlee, spokesperson for Kansans for Wind Energy. Siemens manufactures housing for its wind turbines there.

Wind has become “a big cash crop” for Kansas farmers, she said, with wind farms providing about $16 million a year in lease payments to landowners. Local government receives about $10 million a year in lieu of tax payments from them, which is good revenue for rural counties.

Brownlee, a former Republican state senator and former ALEC member, said she doesn’t know whether another repeal effort will erupt when lawmakers convene in January. But, she said, the industry now is a “huge” part of the Kansas economy and is prepared with the facts for any fight.