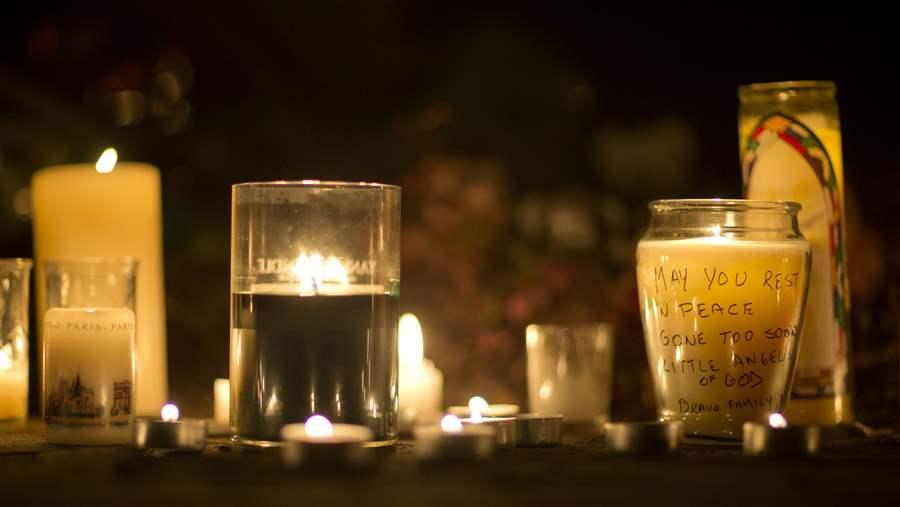 Memorial candles outside a church in Newtown, Connecticut, after the massacre at Sandy Hook Elementary School in December 2012. While many states increased their mental health budgets in the year after the tragedy, fewer did so in fiscal year 2015. (AP)

This story was updated to correct the total amount states spent on mental health in fiscal year 2009. The correct figure is $147.3 billion.

Fewer states increased their spending on mental health programs this year compared to last year, when a spate of horrific shootings by assailants with histories of mental illness prompted a greater focus on the shortcomings of the country’s mental health system.

Some states slashed their mental health budgets significantly this year. At the same time, however, a number of states adopted mental health measures in 2014 that won plaudits from behavioral health advocates.

NAMI warned that the momentum to improve state mental health services, which was especially powerful after the December 2012 Sandy Hook massacre in Connecticut, has slowed.

The group is concerned that last year’s increases were just a blip, and that states are returning to the pattern of the period between 2009 and 2012, when total state spending on mental health fell by $4.35 billion. In fiscal year 2009, total mental health spending, including for substance abuse treatment, by all states was $147.3 billion, according to the federal Substance Abuse and Mental Health Services Administration.

In many states, spending on mental health still hasn’t returned to prerecession levels.

But state budgets don’t paint a complete picture of mental health spending. In January, 27 states plus D.C. expanded Medicaid eligibility under the Affordable Care Act (ACA) to include single people without children who earn 138 percent or less than the federal poverty level, which for an individual is $11,670. That change ushered 7.5 million new enrollees into Medicaid, which provides access to a wide range of mental health services. The federal government is paying 100 percent of the costs associated with those expansion enrollees.

“That is the single most important thing that has happened in mental health this past year,” said Debbie Plotnick, senior director of state policy of Mental Health America (MHA), formerly the National Mental Health Association.

But the expansion may also have persuaded some states to pull back funding for community mental health centers and other mental health initiatives, including school and substance abuse programs.

A number of states that declined to expand Medicaid also reduced mental health spending, according to NAMI. Alaska, which cut mental health spending by 37 percent between 2009 and 2012, made further cuts in the last two years as it weathered falling revenue from declining oil prices. Nebraska, Louisiana and North Carolina, also followed mental health cuts made during the recession with additional reductions in fiscal years 2014 and 2015. 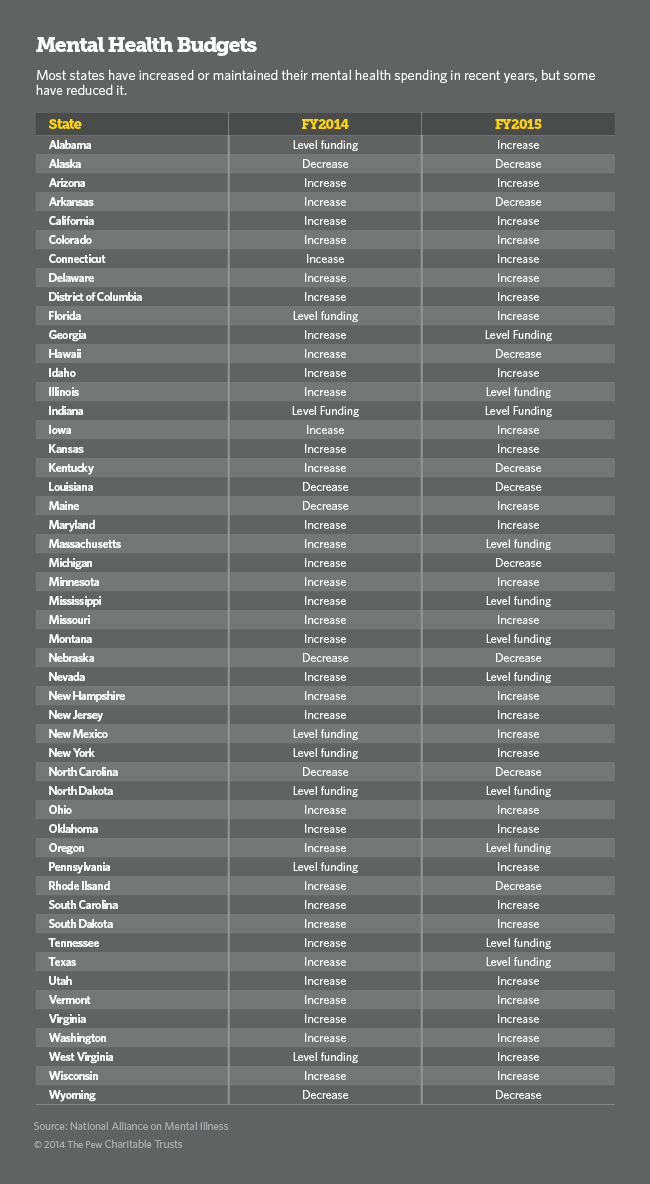 Coincident with the NAMI survey, MHA released its rankings on the mental health status of all 50 states and the District of Columbia based on the prevalence of mental illness and access to mental health services in each state. Access is measured by such indicators as the presence of barriers to treatment, such as lack of insurance, copays, coinsurance, denials of coverage and insufficient numbers of mental health providers. The survey was conducted before the full effects of health insurance expansion under Obamacare had taken effect.

There is a high, but not perfect, correlation between states’ rankings and whether they are Medicaid expansion states. Maine, third on the list, is not an expansion state. Conversely, Washington (48th), Nevada (49th) and Arizona (51st), all expanded Medicaid under ACA.

Overall, the report says that 42.5 million Americans suffer from some sort of mental illness, 19.7 million have a substance abuse problem and 8.8 million report that they have seriously considered suicide.

Although NAMI pointed to the retreat from state mental health spending this year, its report did note a number of new laws that it hailed as possible models for other states. Among them:

Virginia established a registry of available beds in public and private psychiatric facilities to help place individuals who meet the criteria for temporary detention as a result of mental illness. The bill arose after the mentally ill son of Virginia state Sen. Creigh Deeds stabbed his father and then killed himself with a rifle a year ago. Only hours before the incident, the young man had been released from emergency detention when officials were unable to find a hospital with an available bed where he could receive a psychiatric evaluation before being released, as required under law.

Minnesota passed a measure that would base community mental health workers in schools to handle acute mental health cases. Sita Diehl, NAMI’s director of state policy and advocacy, said, “School counselors are focused on general mental health issues. They may not be equipped to handle serious mental health in children.”

Massachusetts enacted a comprehensive “safe and supportive school” measure, which, among other provisions, encourages schools to explore mental health issues when they assess the poor performance or poor behavior of students. “Schools think in terms of academics,” said state Rep. Ruth Balser, a Democrat, who sponsored the bill. “It’s a matter of us educating the educators to think of the whole child.”

For people in the throes of psychosis or another mental illness crisis, Minnesota now provides transportation to a hospital in unmarked cars driven by mental health professionals rather than in police cars with flashing lights and sirens. “When law enforcement is called for medical situations it’s really embarrassing and humiliating for people who didn’t break any law,” said NAMI’s Diehl.

Illinois passed a law aimed at preventing parents with limited or no health insurance from having to relinquish custody of their severely mentally ill children to foster care to get those children intensive mental health treatment. The law requires the state to identify children at risk of state custody and work with their families to get the needed services. In the past, children were taken away from parents to get them treatment. “It was a dirty, dirty secret,” said Sara Feigenholtz, the Democratic state representative from Chicago who sponsored the legislation.

At the other end of the spectrum, North Carolina approved a law requiring Medicaid patients to get authorization from Medicaid before obtaining psychiatric drugs. While supporters cited cost-savings as a rationale for the measure, NAMI’s Diehl predicted it will lead to otherwise avoidable hospitalizations or arrests that will cost the state far more than the medications.

Idaho’s legislature voted to allow the use of restraints with mentally ill patients without a physician’s permission. Georgia terminated the University of Georgia’s “navigator” program, which provided trained helpers to assist people trying to obtain insurance on the federal health exchange.

And Georgia, Arkansas and Tennessee all enacted measures barring promotion of ACA’s provisions or preventing those states from expanding Medicaid eligibility and improving access to mental health care.