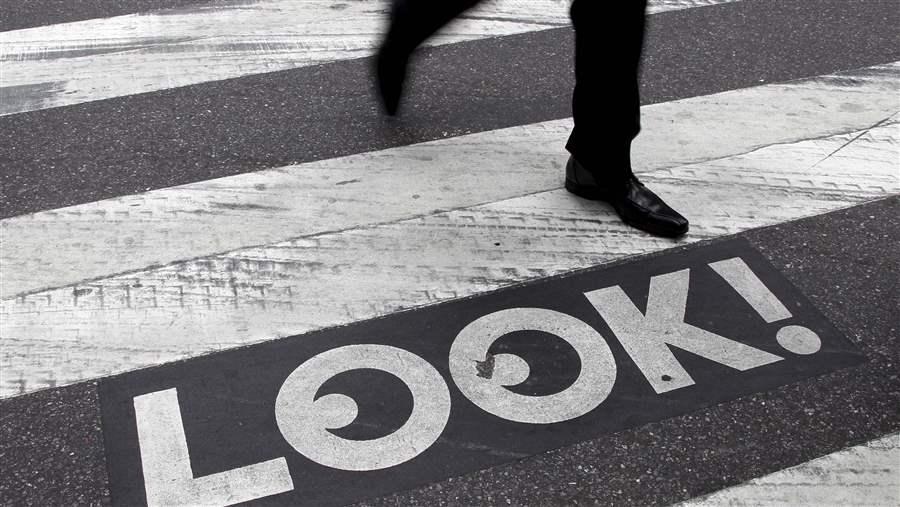 A crosswalk sign warns pedestrians to pay attention on 42nd Street in Manhattan. States and cities are looking for new strategies to combat injuries and deaths among walkers distracted by their cell phones. (AP)

They walk in front of cars, and into tree limbs and street signs. They fall off curbs and bridges into wet cement and creek beds. They are distracted walkers who, while calling or texting on mobile phones, have suffered cuts and bruises, sustained serious head injuries or even been killed.

As many cities and states promote walkable neighborhoods, in part to attract more young people, some also are levying fines on distracted walkers and lowering speed limits to make streets gentler for the inattentive.

Pedestrian injuries due to cell phone use are up 35 percent since 2010, according to federal emergency room data reviewed by Stateline, and some researchers blame at least 10 percent of the 78,000 pedestrian injuries in the U.S. in 2012 on mobile device distraction. The federal Fatality Analysis Reporting system attributes about a half-dozen pedestrians deaths a year to “portable electronic devices,” including phones and music players.

To reduce the number of injuries and deaths associated with distracted walking, Utah and New Jersey have experimented with fines for texting in dangerous walking situations.  And New York state has lowered speed limits in New York City, in part to make traffic less dangerous for distracted walkers.

“The policy issue is that we have to design streets for the way people actually behave, and behavior is changing,” said Noah Budnick, chief policy officer for Transportation Alternatives, an advocacy group based in New York City. “If you’re looking at a phone when you’re walking around, that shouldn’t mean death. So we have to design forgiving streets.”

New York state had to approve lower speed limits for the city, including a new speed limit of 20 mph in Central Park, and a 25-mph speed limit in the rest of the city unless otherwise posted.  The city has also been blocking off more streets to make safer pedestrian plazas. A woman in Queens was killed by a bus in 2012 while talking on a phone as she ran across an intersection in downtown Flushing, an area targeted for pedestrian improvements.

U.S. Secretary of Transportation Anthony Foxx, who has acknowledged that distracted walking is a factor in increased pedestrian deaths and injuries, this year awarded grants totaling $1.6 million to Louisville, New York City and Philadelphia for safety programs. “We’ve got to encourage people to have an awareness that this problem is a real problem,” Foxx said last year. 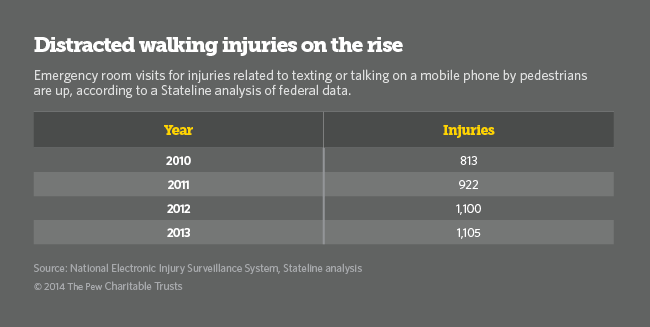 Pedestrian injuries reached 78,000 in 2012, the highest number since 2001, according to the National Highway Traffic Administration.  The number of pedestrian deaths, about 4,700 in 2012, has been increasing since 2009, after falling for several years before that.

Some jurisdictions are targeting distracted walking. In Utah, the state transit authority approved a $50 fine for distracted walking near commuter rail. Fort Lee, New Jersey, used existing jaywalking laws to crack down on people using phones while walking into traffic.

Philadelphia tried to publicize the dangers in 2012 by jokingly marking off sidewalk “e-lanes” reserved for texting walkers on April Fools’ Day. “We know that many, many people are using the sidewalks, looking at their iPhones, Blackberrys, other electronic devices and they’re quite distracted by those devices, bumping into people,” deadpanned Mayor Michael Nutter in a video, as a distracted walker knocked his microphone away.

But many pedestrians interviewed by the city seemed to like the idea and took it seriously.

“As a user, it’ll keep most of those Bozos out of my way,” one onlooker said.

“I’m a severe texter and walker, so I don’t know if I can quit on my own,” another said.

Minnesota, Utah, North Carolina, South Carolina and Washington state have also included pedestrian safety in programs which, like New York City’s, aim to make all traffic deaths a thing of the past.

Some of the money comes for these programs from federal sources, like the $25 million in transportation funds for New York City that will, among other things, widen sidewalks near subway stations in Harlem.

San Francisco is pledging $50 million in local, state and federal funds for its similar Walk First program. The city will scrutinize “high injury corridors” and proposed improvements such as pedestrian refuge islands and raised crosswalks. The program acknowledges the problem of distracted walkers: “Whether (or not) they are using mobile devices…the City’s goal is to improve safety for all types of road users.”

The combination of distracted walking and distracted driving is commonly blamed for the recent increase in pedestrian deaths, according to the Governors Highway Safety Association, which asked states to comment for a recent report.

“Many states agree this is an important issue, although supportive data other than occasional anecdotes are sparse,” the report concluded. Some states differed on the causes – California cited shifting demographics, bringing in new people unfamiliar with traffic patterns, and Nebraska cited warm weather bringing out more pedestrians.

Half of pedestrians admit to talking on the phone while walking across the street, and a quarter say they text or email while crossing the street, even though most realize it’s dangerous, according to a survey last year by Liberty Mutual Insurance.

“So much attention has been paid, and rightly so, to distracted driving that we have ignored the fact that distracted walking and crossing can be just as risky,” said David Melton, a driving safety expert with Liberty Mutual.

Emergency room visit data analyzed by Stateline are published by the Consumer Product Safety Commission, and incidents caused by distracted walking are likely to be underreported, since the injured party would have to confess to texting or phoning while walking.

Jack Nasar, a researcher at Ohio State University, studied the emergency room data and found a six-fold increase in distracted walking injuries between 2005 and 2010. He said the real number could be thousands of times the 1,506 visits he found in 2013.

“I think it is safe to say that the numbers we have are much lower than what is really happening,” Nasar said in a release about his study. Restricting the search for incidents to streets and public places, Stateline found 813 in 2010 and 1,105 last year.

Since his study was published last year, Nasar told Stateline, he’s seen warning signs at crossing points and public-service signs advising against texting and walking. “In a nutshell, it appears that some places are using low-cost efforts for pedestrian safety,” Nasar said.

Another researcher at the University of Buffalo, Dr. Dietrich Jehle, estimated that one in 10 pedestrian injuries is now related to distracted walking, and that it causes more accidents than distracted driving, even if the severity of injuries is lower.

Jehle, who based his estimate on his own experience as an emergency room physician, said texting is the most dangerous thing to do on foot – more dangerous than listening to music or talking on the phone. A Stony Brook University study in 2011 documented the effect of texting on navigation while walking, finding it significantly more dangerous than talking on a cell phone, leading to a rate of 61 percent navigation errors in simulated situations.

“While talking on the phone is a distraction, texting is much more dangerous because you can’t see the path in front of you,” Jehle said.