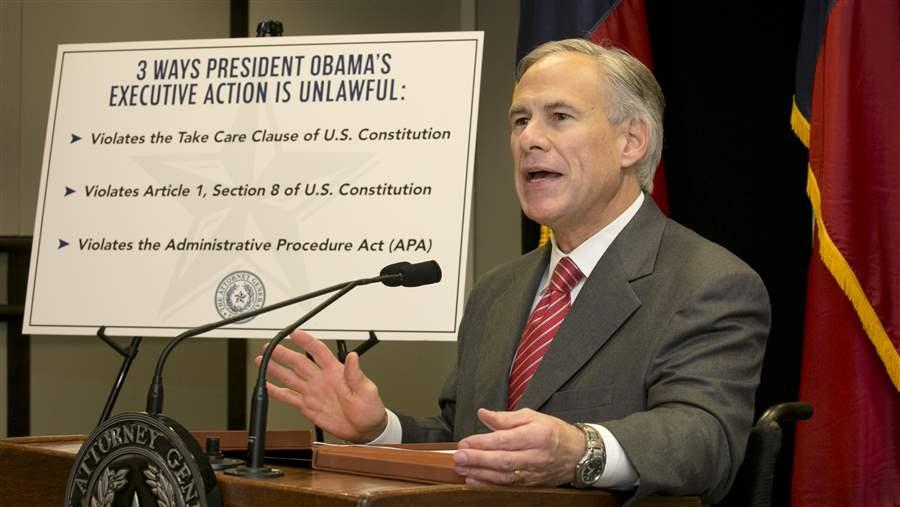 President Barack Obama’s decision to defer the deportation of millions of undocumented immigrants has prompted sharply varying reactions from state leaders, with some vowing to fight the decision and others hailing it as a vindication of their own policies.

Texas and Oklahoma prepared to file lawsuits to overturn Obama’s new policy, while Arizona’s new governor vowed to continue withholding driver’s licenses and in-state tuition from anyone who will benefit from it. Meanwhile, Obama’s decision to offer a deportation reprieve to eligible immigrants echoes policies already in place in California, Connecticut and Rhode Island.

Under the president’s plan, about 4 million unauthorized immigrants who are the parents of U.S. citizens will be eligible to have their deportations deferred and to work legally, as long as they pass background checks and pay taxes. Another one million people will be protected from deportation through other components of the plan.

In addition, the executive action ends the Secure Communities program, under which federal authorities asked local police to detain unauthorized immigrants arrested for traffic violations and other minor offenses. California, Connecticut and almost 300 cities and counties already were limiting or refusing cooperation with federal “detainers,” or requests from immigration authorities to hold someone for possible deportation.

A Department of Homeland Security memo issued on the day Obama laid out his plan acknowledged that “governors, mayors, and state and local law enforcement officials around the country have increasingly refused to cooperate with the program." It said monitoring local jails for deportable criminals "needs a fresh start and a new program."

California has 1.1 million potential beneficiaries of the Obama plan, more than any other state, according to the Migration Policy Institute. According to research by the University of Southern California, 13 percent of the children in California have parents who are unauthorized immigrants and might qualify for the new program. Texas has the second most potential beneficiaries, at 560,000.

Threats of a Lawsuit

While California saw some of its policies enshrined in Obama’s plan, Texas was quick to vow resistance to it. Greg Abbott, the state’s Republican attorney general and governor-elect, pledged to “assert a legal action against President Obama’s unconstitutional abuse of power.” Abbott said Monday a lawsuit from Texas could come in the next two weeks.

“Most everyone agrees that the immigration system in America is broken,” Abbott said. “Similarly, most agree that executive fiat is not the right way to fix it."

In Arizona, Republican Gov.-elect Doug Ducey has vowed to continue outgoing Republican Gov. Jan Brewer’s policy of prohibiting driver’s licenses for unauthorized immigrants, even for those covered by the Obama plan. He also pledged to enforce a state law prohibiting the state from granting in-state tuition or other benefits to unauthorized immigrants, even if they get work permits under the new federal policy.

Arizona and Nebraska are the only states that do not offer driver’s licenses to unauthorized immigrants who qualify for Deferred Action for Childhood Arrivals (DACA), the existing federal program that allows young people whose parents brought them to the U.S. illegally to remain in the U.S. temporarily as long as they meet age, education and residency requirements.

But it is unclear how much longer Arizona can pursue its driver’s license policy. A federal appeals court on Monday rejected a state request for a rehearing on an order to stop the policy issued in July.

A recent report by the Pew Charitable Trusts (Pew funds Stateline) noted that states and localities can play an important part in implementing legalization programs and integrating newly legalized immigrants into their communities. Illinois and Maryland are two states that have pursued immigrant-friendly policies in recent years—but the ascension of Republican governors after years of Democratic rule may prompt them to change course.

Illinois currently ignores immigration status in handing out driver’s licenses, and it has plans to launch an Obamacare-style health insurance exchange open to unauthorized immigrants. Amalia Rioja, an aide to outgoing Democratic Gov. Pat Quinn, said the office is making final preparations for the health care exchange, but no one knows what will happen when Republican Gov.-elect Bruce Rauner takes over in January. Rauner’s transition team has declined to say what he will do about the exchange.

“A lot of what I’m doing could be irrelevant,” Rioja acknowledged.

In Maryland, outgoing Democratic Gov. Martin O’Malley called for fewer deportations and signed a law allowing unauthorized immigrants to get in-state tuition if they attended local high schools and their parents had paid income taxes. It is unclear whether Republican Gov.-elect Larry Hogan will continue those policies.

During the campaign, Hogan criticized both Republicans and Democrats in a televised debate on immigration. “I can understand why we want to be welcoming to people who want to come to this country, but we’re also a nation of laws,” Hogan said, blaming Obama and members of Congress from both parties for failing to overhaul immigration.

Correction: This story was updated to clarify that while almost all the counties in Colorado have been limiting or refusing cooperation with federal “detainers,” it is not a statewide policy.