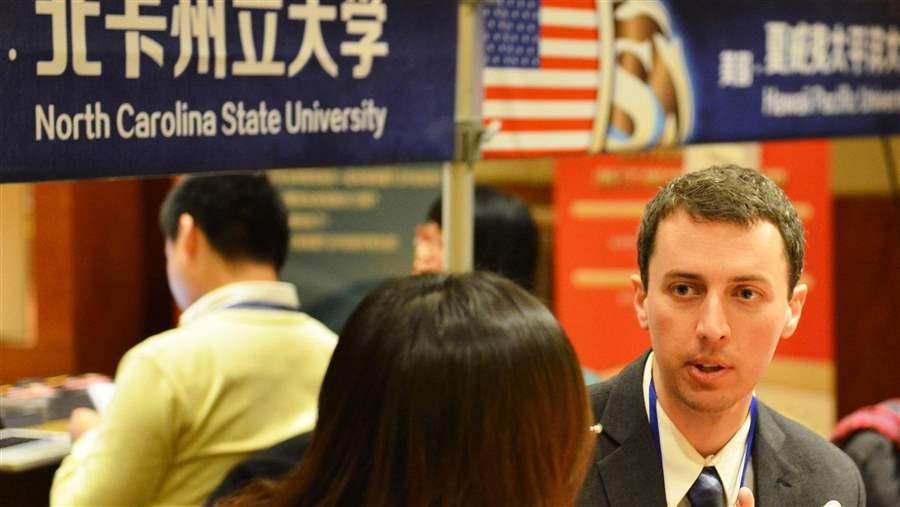 An education consultant talks with a visitor about studying in the U.S. at the stall of North Carolina State University during an international education exhibition in China last year. States and colleges are trying to lure international students to their campuses. (AP)

The number of U.S. college students from overseas has skyrocketed in recent years, with more than 886,000 studying on American campuses this past academic year — an all-time high and more than double the number of foreign students 20 years ago.

At a time when many states have squeezed funding for higher education, international students are highly sought after because they pay higher tuition than U.S. students. In some states, as much as 10 percent of college students come from overseas. But other states have far fewer, leaving schools there at a financial and educational disadvantage in an increasingly global and competitive higher education field.

California, New York, Texas and Massachusetts top the list of states with the most international students. Alaska, Wyoming, Maine and Vermont have the least.

But in terms of percentage of total enrollment, a different picture emerges. Washington, D.C., Massachusetts and New York have the highest shares. But the next four are Delaware, Washington, Rhode Island and Indiana, each with 6 percent or more of their college students from abroad. On the other end, Maine, Mississippi, Alaska and West Virginia have the smallest shares at under 2 percent.

Amid the uneven growth, state policymakers and school administrators have gotten involved. In some cases, states now oversee international recruitment efforts. Some states are trying to tie state funding to efforts to boost in-state enrollment. In others, officials have questioned whether schools — especially large, public universities — are focusing on international students at the expense of in-state students.

The result of the competing interests and global trend is that higher education in the U.S. is no longer a domestic concern, but one that is playing on an international stage. Few see the trend subsiding soon. Many say colleges and universities will end up better for it.

“Higher education admissions are based on merit, and they’ve always been based on merit. Now the talent pool is just much wider,” said Peggy Blumenthal, senior counselor to the president of the Institute of International Education (IIE), which released a study on global higher education last week. “The fact is that the rest of the class is advantaged by having the smartest kids in the world.”

The difference in payment-per-student has become all the more important as states have cut overall higher education funding in recent years. In response, schools have turned abroad to make up the difference.

“Everybody first and foremost looks to the financial dimension,” said Mike Reilly, executive director of the American Association of Collegiate Registrars and Admissions Officers. “You see far more institutions getting in the enterprise of actively seeking international students.”

One unexpectedly strong performer in the campaign, experts say, has been Washington state, where higher education spending per student has been cut nearly 28 percent since fiscal year 2008, according to an analysis by the Center on Budget and Policy Priorities (CBPP).

The state lacks a globally renowned university like those in, say, California, New York or Massachusetts. But the University of Washington has become a destination, especially for students from Asia. Unlike in other states, Washington’s community colleges also are aggressively playing the international recruiting game, according to Reilly.

The result is that 7 percent of Washington’s overall college population comes from abroad, the fifth-highest share among the states and the District of Columbia.

About 10 percent of the college students in Massachusetts are international students, in large part attracted by world-renowned schools such as Harvard and MIT. But the University of Massachusetts Lowell is another heavy international recruiter. The state has seen its own share of higher education cuts as well: more than 36 percent since fiscal year 2008, according to CBPP.

“Higher education is one of our main industries in our state,” said Kathryn Carter, the school’s vice provost for graduate and international affairs and strategy. “Our domestic students have to go out there and deal with a global population,” she added. “We’re trying to do everything that we can to give them a global experience as soon as possible.”

Making Up for Disadvantages

Other states, though, don’t have the inherent advantages of Massachusetts, the District, New York or others when it comes to international students. To make up for that, they use a range of strategies to attract interest. Many send representatives to recruiting fairs abroad. Others establish relationships with schools and professors in other countries, offering a way for students elsewhere to be exposed to schools in the U.S. before they ever consider moving here.

Still, whether it’s a matter of economy, geography or institutional variations where schools in certain states are simply more attractive overseas than others, some states haven’t shared in the growth of international students.

West Virginia is one of them. Just 1.7 percent of its higher education students are international. While 14 states saw growth in international students increase by 10 percent or more from the 2012-2013 to 2013-2014 school years, according to IIE, West Virginia’s growth was just 1.9 percent.

About a year ago, West Virginia set out to change that trend. The state is one of the few to coordinate international outreach at the state level, combining efforts of all its public colleges to meet a goal of “internationalizing” its campuses, said Clark Egnor, the state’s Higher Education Policy Commission's director of international programs, an office created last year.

“In a state that’s as homogenous as West Virginia, having international students on a campus is very visible,” said Egnor. “The campuses want that diversity, and they want that international diversity.”

The recruitment effort has filtered into other international outreach campaigns the state has undertaken as well, especially as state officials have taken an interest in growing international enrollment, Egnor said.

The state has a formal relationship with the largest coal-producing province in China, thanks to their shared interest in developing the fossil fuel. Just recently, West Virginia moved to expand that partnership to include educational exchange, something the state hopes will boost enrollment.

“These numbers are important,” he said. Boosting international profile and recruiting overseas is often seen as a way to improve the overall image of a state and its schools. “A lot of the political leaders, they want to look at this stuff,” Egnor said.

But the increase in international students hasn't met with universal acclaim.

The most common worry, education experts say, is that a focus by public colleges on international students will come at the expense of in-state students. That’s especially true when the concern is over the large, public universities that are some of the most attractive abroad, namely research destinations like the University of Illinois at Urbana-Champaign, Purdue University, Arizona State University and Michigan State University, all of which are in the top 10 when it comes to the number of international students.

The issue has gotten particular attention in Iowa, where public university regents have pushed a plan to send more state funding to public colleges in the state that host more in-state students. Specifically, the Board of Regents adopted this year a funding plan that tied 60 percent of state funding to resident full-time enrollment. As a guideline, the board said, “the highest (though not necessarily the sole) priority for state appropriations is to fund the education of resident students.”

That move, some have worried, hurts the University of Iowa (where 47 percent of all students were nonresidents last fall), compared to the other two public colleges in the state, Iowa State University and Northern Iowa University, which had 40 percent and 11 percent nonresident students, respectively. The Iowa City Press-Citizen headlined a story on the change, “Game on: Competition for in-state students intensifies.”

The University of Iowa, for its part, has taken it in stride, and the full effect of the change might not be known for years.

“The University of Iowa has always been a global institution,” said Downing A. Thomas, associate provost and dean of international programs. “We actively recruit here in Iowa and in targeted areas around the world, and currently have over 4,000 students from over 100 countries.”