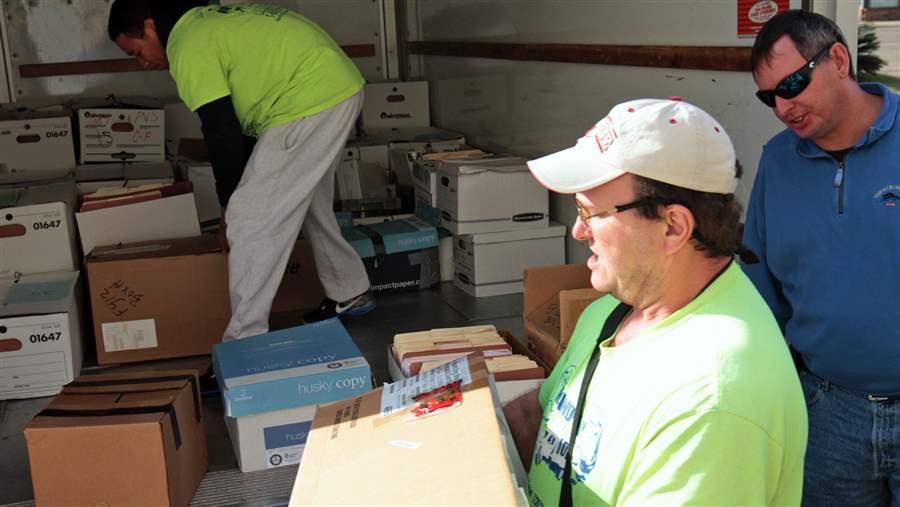 Mississippi State Auditor's Office special agent Chris Lott, right, watches as Department of Marine Resources records are unloaded at a courthouse in Gulfport, Mississippi. The records were the subject of a dispute between the Sun Herald newspaper and the DMR and auditor’s office. Some states are requiring officials to undergo open government training to improve accountability and reduce public records lawsuits. (AP)

When Washington state Rep. Gerry Pollet took office in December 2011, one of the first things he said he did was start preparing a bill that would require open government training for public officials.

As a citizen activist and public interest attorney, Pollet thought the government needed to do a better job promoting openness and improving compliance with state sunshine laws that require records of public agencies to be available to the public.

Pollet’s first attempt failed, but he kept trying. This year, with the help of a Senate colleague and the state’s attorney general, who requested it, the legislature approved a training measure that Pollet hopes is a model for other states.

“For years, I’ve seen state and local government agencies flout the public records act, denying access on critical issues of concern to the public and the news media,” said Pollet, a Democrat. “We had flagrant violations being found by the courts. The state or local government said, ‘Well, our staff screwed up but they didn’t do it maliciously. They didn’t know what they were doing.’”

Washington joins a small number of states, including Texas, Maine and Florida, that require elected officials to be trained in open government laws. The aim is to improve disclosure and curtail public records lawsuits, which often result in taxpayers footing the bill.

“Training is essential. The more education we can have on the government side, the better,” said David Cuillier, director of the University of Arizona School of Journalism and chairman of the Society of Professional Journalists’ Freedom of Information Committee.

While the Freedom of Information Act (FOIA) requires federal government information be available to citizens, every state has its own open records law that allows the public access to records and documents. Each state also has a law that requires most government business to be conducted at meetings that are open to the public.

Open government advocates say that training, such as learning how to comply with public records requests and what the penalties are for failing to do so, is critical because it strengthens citizens’ access to information and improves government accountability.

“If we’re going to make public officials legally responsible for a violation of the law, then we need to teach them what the law requires them to do,” said Barbara Peterson, president of the First Amendment Foundation, a Florida-based open government watchdog group.

A report by the Washington state auditor’s office identified more than 250 open government-related issues in 2012. Most dealt with one-time violations, such as inadequately maintaining public meeting minutes. But some were more significant, including inadequate notification about special meetings and executive sessions, or council members reaching consensus through email rather than in an open session.

“Public access to government actions and information is fundamental to accountability,” the report stated.

Washington Attorney General Bob Ferguson, a Democrat, said he sought the training measure because he wanted to ensure that the people who deal with public records and open meetings know what the law requires of them. “Taxpayers shouldn’t pay a big penalty for the failure of their elected officials to turn over documents,” he said.

In recent years, there have been a flood of cases in which public agencies in Washington have agreed to big settlements or been ordered to pay major penalties for failing to comply with open government laws. Washington’s state Supreme Court allows penalties to be increased when there has been a lack of training in a public records lawsuit.

Earlier this year, Snohomish County agreed to pay $575,000 to settle a lawsuit filed by an environmental group that said it had been thwarted in its efforts to get public records in a timely manner. Among the records were emails that agricultural advisory board members apparently had used from their personal accounts to conduct board business.

Last year, a judge fined the University of Washington more than $720,000 for withholding public records from a professor who said she was wrongfully denied tenure. That case is being appealed.

It applies to elected and appointed local and statewide officials who are subject to the public records act, as well as agency officials who must abide by the open meetings act. It includes everyone from the governor and attorney general to county commissioners, school board members and local sewer district officials. It also affects public records officers working for state and local agencies.

Between 5,000 and 6,000 officials will need training, which can be presented in-house by an agency’s legal counsel or other staffers or trainers, the attorney general’s office, the state auditor’s office or groups such as the state school directors association. It can be taken online or in person.

Nancy Krier, the assistant attorney general for open government, already has trained more than 1,200 people since July, including members of the Washington Association of County Officials.

“I think when you know better, you do better,” Krier said. “It’s important because it helps our transparency in government.”

Krier said that training videos are available through the attorney general’s website and YouTube. As of mid-November, the public records video had gotten more than 6,000 views on YouTube. The open meetings version had more than 5,000.

Krier said it was important to offer the training online, given the state’s geography and the number of people involved. “Our state is divided by a mountain range. Traveling is a big issue, especially during the winter months,” she said. “With the way people work nowadays and learn long-distance – we’re the land of Microsoft - we’re pretty comfortable with computers.”

The training is based on an honor system, and participants aren’t required to document that they’ve taken it. But Ferguson, the attorney general, said he is confident that officials will abide by the letter of the law.

Those officials, however, won’t include the Washington Legislature. The new law exempts legislators, who already are excluded from the state’s open meetings act and most public records requirements.

The House version of the bill initially included new legislators and required incumbents to get updated training every two years. Those provisions didn’t make it into the final bill. “It was made clear that the bill would not pass” with those provisions, Ferguson said.

Some States Lead the Way

One is Texas, which since 2006 has mandated that elected and appointed officials who serve on governmental bodies, ranging from state agencies to local boards and commissions, get training in open records and public meetings laws. The attorney general’s office often conducts the open meetings and public information courses, which are an hour each.

The training can take place online, by video or in a classroom. Officials must attend the open meetings portion, but they can designate a staff member to take the public records training on their behalf, if that person is primarily responsible for responding to requests for records.

According to the Texas attorney general’s office, the measure was enacted because failure to comply with public records laws can result in civil and criminal penalties for public officials and lead to a “general breakdown of public confidence” in government.

Maine also mandates open government training. But its law encompasses the legislature, which is not exempt from the state’s Freedom of Access Act.

Maine’s law, which took effect in 2008, requires most elected officials, including the governor, county commissioners and municipal officers, to get training within 120 days of taking office. It was amended in 2012 to include public access officers, who are designated by each agency to acknowledge records requests and determine how long it will take to respond.

Brenda Kielty, an assistant attorney general who is Maine’s public access ombudsman, said training for most officials is self-administered and can be completed online. Once it’s done, the person gets a certificate, which is on file.

Legislators, however, receive training in person. In the last legislative session, Kielty said she trained most of the incoming legislature. She has a session scheduled for new legislators in December.

“It’s very important because the law is frequently amended,” she said. “The Freedom of Access Act reflects changes in technology, and it has to do with information and communication. Being current on that is important.”

In Florida, the legislature passed a law in 2013 that required ethics, public records and open meetings training annually for all constitutional officers, such as the governor, state attorneys, sheriffs and elections supervisors, beginning this year. It later expanded the law to include elected city officials starting in January.

Peterson, the Florida open government advocate, said that while it’s good that legislators passed the measure, it actually focuses on ethics training rather than on open government. She said that the law requires the state’s Ethics Commission to adopt rules establishing the course’s content, but the panel doesn’t have the authority or expertise to create standards for sunshine training.

“It never addressed what the standards should be or who is supposed to oversee the program. There’s no formal process for getting these programs approved. It’s absurd,” said Peterson, who has conducted open government training sessions for public officials.

Cuillier, of the Society of Professional Journalists, suggests that states mandate training not only for elected officials but for agency staffers who deal with the public’s requests for records. “The day-to-day work is really done by clerks and people on the ground,” Cuillier said. “They handle the bulk of the requests and that’s where most of the problems lie.”

“We keep seeing more lawsuits and an increase in public records requests. Municipal and state governments are paying high attorneys’ fees,” Bevarly said. “It’s not a smart use of public resources, and the political advantages that can be gained by being more transparent makes it a little more digestible for states to get behind this.”