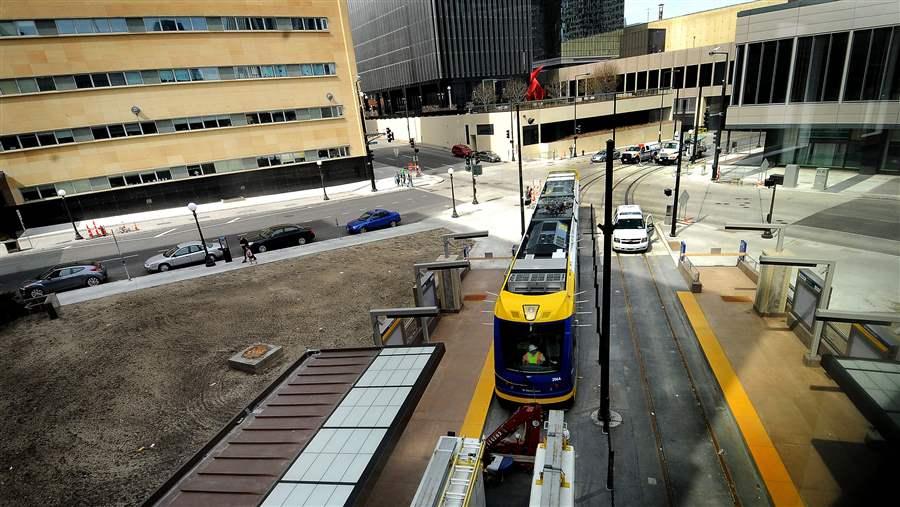 The Light Rail Green Line between Minneapolis and St. Paul opened this year. A health impact analysis that showed the negative health effects the line would have on residents in poorer neighborhoods forced changes in the original plans. (AP)

MINNEAPOLIS, Minn.— For years, proposals to raise the minimum wage in Minnesota bogged down over economic concerns: Would a raise impel businesses to leave the state? Would it decrease employment? Would it touch off inflation?

The supporters’ main argument, that raising the minimum wage would put more money into the pockets of low-wage workers and their families, fell short.

This year, proponents seized on a new strategy: They convinced the legislature to ask the Minnesota Department of Health to analyze the health impact of the state’s minimum wage of $6.15 an hour, which is among the lowest in the country.

The department’s subsequent analysis revealed that health and income levels were inextricably linked. Whether it was rates of adequate prenatal care, infant mortality, diabetes, suicide risk, or lack of insurance, the results for poorer Minnesotans were vastly inferior to residents with higher incomes. In fact, Minnesotans living in the highest income areas of the Twin Cities region lived eight years longer than those living in the poorest.

The report virtually ended the debate. The legislature voted to phase in an increase in the minimum wage to $9.50—one of the highest in the country—with automatic subsequent increases indexed to the rate of inflation.

For at least a decade, most states have been focusing on reducing health disparities—the difference in health outcomes among different population groups, such as minorities and the poor. But Minnesota has become a model for other states by making it an overarching state priority, not only for the state’s health agency but for all departments, from economic development to transportation to housing.

Angela Glover Blackwell, founder and CEO of PolicyLink, a national research and policy institute that tracks inequity in the United States, said, “It is truly extraordinary that a state would put a health in all policy areas front and center in this way.” As the size of minority populations in the U.S. becomes larger, she said it is essential that other states follow Minnesota’s lead.

The idea, which has gained traction among health policymakers across the nation, is that to improve population health, it is not enough to have a good health care delivery system. It’s also necessary to attack underlying social, economic and behavioral factors that contribute to poor health, such as deficient job opportunities, unsafe environmental conditions, crime, and lack of recreational outlets.

The minimum wage debate in Minnesota illustrated the power of that connection. Other states, including Kansas, Massachusetts and California, have employed similar analyses on such diverse matters as energy, domestic workers’ rights, and allowing more retailers to sell alcohol.

“That report created a powerful narrative for us, low-wage workers dying eight years before higher wage earners,” said Alexa Horwart of Isaiah, a faith-based organization in the forefront of the minimum wage fight.  “We thought we were going to win this year, but the question was how high would the new rate be and would it be indexed. The report had the most impact on those two things.”

By the time the Minnesota health department weighed in, no one could have been wholly surprised. Only weeks before, the agency had submitted to the legislature another sweeping report called “Advancing Health Equity in Minnesota.”

In it, the department said it was no longer enough for the state to attack health disparities on a disease by disease basis. The report argued that inequitable policies or practices in diverse areas such as transportation, housing, education and economic development also were damaging the health of disadvantaged groups and the population at large.

Some of those inequities, the report acknowledged, resulted from what it called “structural racism,” which it defined as “the normalization of historical cultural, institutional and interpersonal dynamics that routinely advantage white people while producing cumulative and chronic adverse outcomes of people of color and American Indians.”

The inclusion of those two words surprised many. “There are terms in the report that we haven’t heard before from state government,” said Melanie Plucinski of the American Indian Foundation.

As an example of “structural racism,” Jeanne Ayers, an assistant state health commissioner and co-author of the health equity report, pointed to the department’s radon elimination program, which has always been targeted toward homeowners, not renters. But while three-quarters of the white population in Minnesota own their own homes, less than a quarter of blacks do.

“The (health equity) report illuminated that health is more than what happens in the doctor’s office. It incorporates everything,” said Kris Rhodes, executive director of the American Indian Cancer Foundation, which is headquartered in Minneapolis. “It turned everything on its head in terms of what we think about health.”

Rhodes made that remark last week during a break at a meeting at St. Mary’s University of the Minnesota Health Partnership. The group, composed of dozens of community groups in the state, meets regularly with health department officials to discuss ways of achieving health equity and to monitor the department’s progress on that issue.

Jim Abeler, the ranking Republican on the Minnesota House Health and Human Services Committee, is less impressed. He said he believes the elimination of health disparities is essential, but he called the health equities report an attempt by the health department to distract attention from its poor record to date in shrinking disparities. “It’s one thing to say you care,” he said. “It’s another to actually do something about it.”

Abeler said he was also disgusted that the department would evoke racism as an underlying reason for health disparities. “I don’t think it’s a cause at all. It’s a dodge.”

By all measures, residents of Minnesota are among the nation’s healthiest, with comparatively low levels of obesity, diabetes and heart disease. The state also has a world-class health delivery system, anchored by the Mayo Clinic in Rochester.

Yet, according to Ayers, the assistant state health commissioner and co-author of the health equity report, “We are also doing among the worst in terms of our disparities, and the disparities are in the part of the population that is growing the fastest. We are on a downward trajectory.”

Aside from health disparities based on income differences, blacks (who make up 5.7 percent of the overall Minnesota population) and American Indians (1.3 percent) experience far worse health outcomes than whites in Minnesota. Asians (4.6 percent) and Hispanics (5 percent) also frequently lag behind.

Almost all states have programs designed to close such gaps. Minnesota, for example, has targeted grants toward particular diseases or conditions in particular populations. It has dispersed grants to combat teen pregnancy, diabetes, HIV/AIDS and cancer among certain selected populations. Like many other states, Minnesota also established an Office of Minority Health.

But Ayers and her boss, Health Commissioner Ed Ehlinger, recognized that clinical care plays only a small part in determining one’s health. Lifestyle behaviors, the physical environment and social and economic factors together are much more important predictors of people’s health than the health care they receive.

“Health outcomes are a physical manifestation of the inequities in the opportunities to be healthy,” Ayers said.

In Minnesota, the health equity argument has proved decisive in several instances, beyond the minimum wage debate:

The city of Minneapolis partnered with a nonprofit to begin a free bike-sharing program in 2010 with kiosks in downtown and affluent south Minneapolis. The city health department wanted poorer North Minneapolis to have access to the bikes as well to encourage exercise, but discovered a stumbling block. Although free, members had to register with a credit card, which poor people often don’t possess. City officials and the nonprofit are trying to figure out an alternative system.