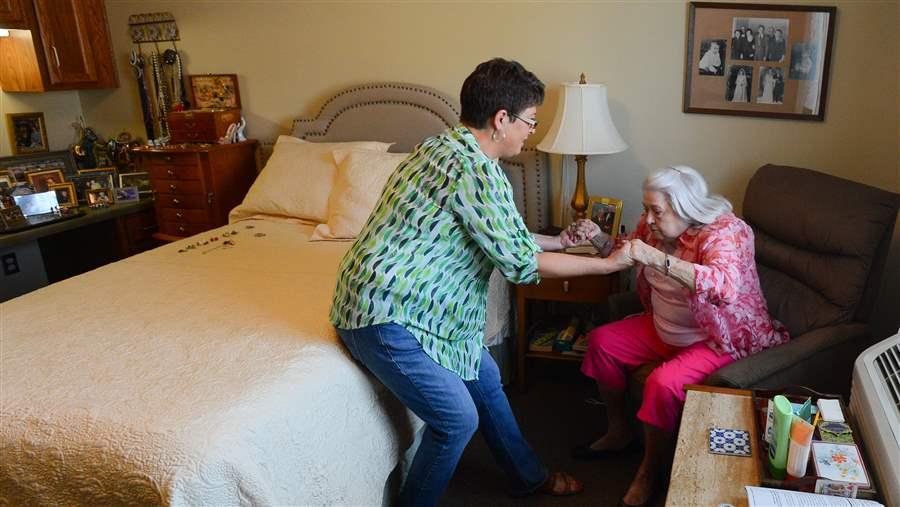 Kim Lemmond helps her mother, Nita Lawrence, 84, in her room in Westminster Assisted Living, in Decatur, Alabama. A new federal rule designed to ensure places like Westminster are visitor-friendly and more home-like than nursing homes, could make it harder for facilities to qualify for Medicaid reimbursement. (AP)

For more than 30 years, states have been finding new ways to care for aged and disabled Medicaid beneficiaries without confining them to nursing homes. In fact, the number of people living in skilled nursing facilities has declined significantly over the last decade, despite a marked increase in the ranks of the elderly in the U.S.

Starting this year, a new federal rule will require states to ensure that long-term care alternatives to nursing homes—such as assisted living facilities, continuing care retirement communities, group homes and adult day care—work with residents and their families to develop individual care plans specifying the services and setting each resident wants. The overarching goal is to create a “home-like” atmosphere, rather than an institutional one and to give residents choices about their care.

While nearly everyone supports the concept, states, providers and even some consumer advocates are complaining that the rule could make it difficult for health care providers to fulfill increasing demand for long-term care outside of nursing homes.

Under the rule, for example, elderly people with dementia who enter assisted living facilities should not be subjected to constraints, such as locked exits, unless they are at risk for wandering. But if they share living space with other residents with dementia who do need to be prevented from wandering, it will be difficult to allow them to leave the building whenever they want without jeopardizing the safety of others.

“The goal was completely laudable,” said Martha Roherty, director of the National Association of States United for Aging and Disabilities, which works to help elders and people with disabilities live in their communities for as long as possible. “Unfortunately, what’s happened is that it is limiting individuals’ choice of what and where to receive (long-term care) services rather than broadening it, especially as it relates to seniors,” she said.

The first step in what will be a five-year process is for state Medicaid agencies to file “transition plans” before March 17, 2015. So far, Georgia, Indiana, Iowa, Massachusetts, Mississippi and Oregon have laid out the steps they intend to take to ensure everyone with a vested interest in home and community-based long-term care gets a say in how facilities and services are regulated.

By 2019, all facilities and services that receive Medicaid reimbursement must comply with the rule. 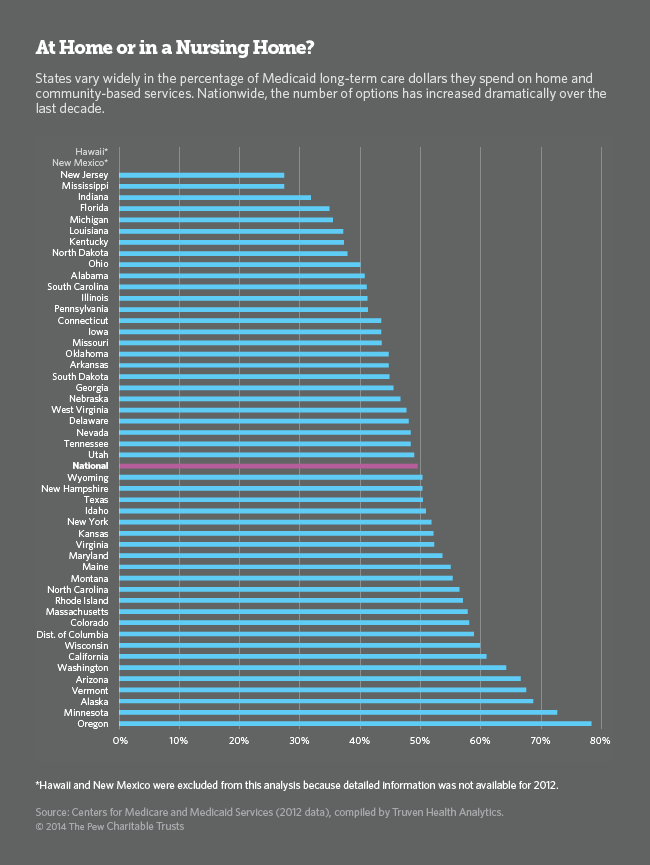 Until now, the federal government’s biggest concern was that states weren’t ensuring an adequate supply of alternatives to nursing home care. In fact, the U.S. Department of Justice has been suing states under a 1999 Supreme Court decision, Olmstead v. L.C., for violating the Americans with Disabilities Act by not providing enough long-term care services that allow people with disabilities to remain “integrated” in their local communities.

Now, the federal government is stressing the quality of nursing home alternatives, not just availability. Unveiled earlier this year by the U.S. Department of Health and Human Services, the regulations were largely driven by advocates for younger people with physical and mental disabilities for whom independence and dignity is a lifelong issue.

Unlike elders, who mostly end up disabled at the end of their lives without having planned for it, many younger people with disabilities, along with their parents, have been fighting for better care for much of their lives.

“The disability community was the driving force behind this,” said Eric Carlson, a long-term care policy analyst with National Senior Citizens Law Center. But he said the federal government is aware of states’ concerns about how the rules could limit the availability of services for elders and will work with states to implement them in ways that accommodate people of every age and every diagnosis and disability.

The new message is loud and clear, said Donald Redfoot, a long-term care policy adviser with AARP. “We don’t want institutions that are just dressed up to look like home and community-based care. We want real change.”

But some say the new rules may have unintended consequences. In addition to creating hurdles for dementia wards in assisted living facilities, limits on where assisted living and adult day services can be located may create challenges for some existing providers.

According to the rule, any facility or service located near a hospital or nursing home must be subjected to “heightened scrutiny” by state regulators, because their location alone makes them more likely to have an institutional feel.

That may be true for facilities for younger people with disabilities who want more access to local jobs and other activities. In fact, an assisted living complex located on the campus of a Missouri state mental hospital was specifically cited during development of the rule because the federal government said it was segregated from the larger community.

But for seniors, the opposite is often true. Many adult day centers and assisted living facilities are purposely located near nursing homes and hospitals to make it easier for elderly people to get hospital care when they need it or visit a loved one in a nursing home.

Roherty and other critics of the new rule say they agree with much of the “beautiful language” in the regulations, but are worried about how it will play out in the real world.

“It is a well-intentioned rule in theory. Who can disagree?” said Matt Salo, director of the National Association of Medicaid Directors. “But in reality, I don’t know that it works.” It may not force existing providers out of business, he said, but it could discourage new ones from entering the market because of uncertainty about how each state will implement the rule.

Supporters, including the National Senior Citizens Law Center, argue that individual circumstances will be ironed out over time. “I think the idea that providers will have to shutter their businesses is unnecessarily alarmist,” said the center’s Carlson.

A Matter of Cost

Under the 1965 Medicaid law, states must provide nursing home care for anyone who needs it—no waiting lists are allowed. Providing health care services in people’s homes or in community settings, such as adult day care or assisted living, wasn’t even an option until the 1980s.

Since then, states have made huge strides in providing alternatives to skilled nursing facilities for people who do not require the intensive health care services they provide. According to AARP, nine out of 10 older Americans say they would rather not check into a nursing home if they can avoid it.

Nursing homes tend to look more like hospitals than homes, with nurses’ stations and long linoleum hallways flanked by double-occupancy rooms.  Residents often lack privacy and the ability to visit with loved ones, and are forced to adhere to rigid dining, waking and sleeping schedules.

In contrast, the new rule aims to ensure that residents of home and community based facilities can decorate their own rooms, have visitors whenever they want and eat meals and snacks any time. They should have the freedom to come and go when they please, as long as they are competent to do so, and they should be able to lock their rooms so staff can’t barge in. Although it is difficult to precisely define, states are charged with ensuring that facilities and services feel more like home than an institution.

States vary widely in the percentage of total long-term care dollars spent on home and community care, with Oregon and Minnesota exceeding 70 percent, and New Jersey and Mississippi spending less than 30 percent. The national average was 46 percent in 2012.

Although many older people do not qualify for Medicaid when they enter a nursing home, they end up qualifying after they have depleted their available resources. Medicare covers only up to 90 days of what is known as post-acute long-term care after an injury, illness or surgery. Medicaid pays for low-income elders who require longer stays.

Part of the federal government’s impetus for launching its Medicaid “waiver” program 30 years ago to cover home and community based costs, was to curtail overall spending. According to AARP, Medicaid can support nearly three older people or disabled adults in home and community settings for every one person who lives in a nursing home.

Although costs vary widely across states, the average annual cost for a single-occupancy room in a nursing facility is $87,235 per year, according to the federal government.

The number of individuals 70 and older with some form of dementia is expected to surge from 3.6 million in 2010 to 9.1 million in 2050, according to a report published last week by the University of Southern California. With a growing population of people who need dementia care, the rule barring locked exits presents real obstacles that will require creative solutions.

“Taking away the ability to secure a memory unit (for people with dementia) is a major problem,” said David Kyllo, director of the National Center for Assisted Living, which represents assisted living providers. “We don’t yet have an alternative that can truly protect individuals. Some say you can provide one–on-one care, but the Medicaid program won’t pay for that,” he said.

At the same time, Kyllo acknowledged, it’s easy to see why younger people with mental disabilities would object to such constraints in an assisted living facility. For them, it would feel a lot like a mental institution. The comparison illustrates the problem. “For all of its emphasis on person-centered care, the rule itself is more of a one-size-fits-all approach,” he said.