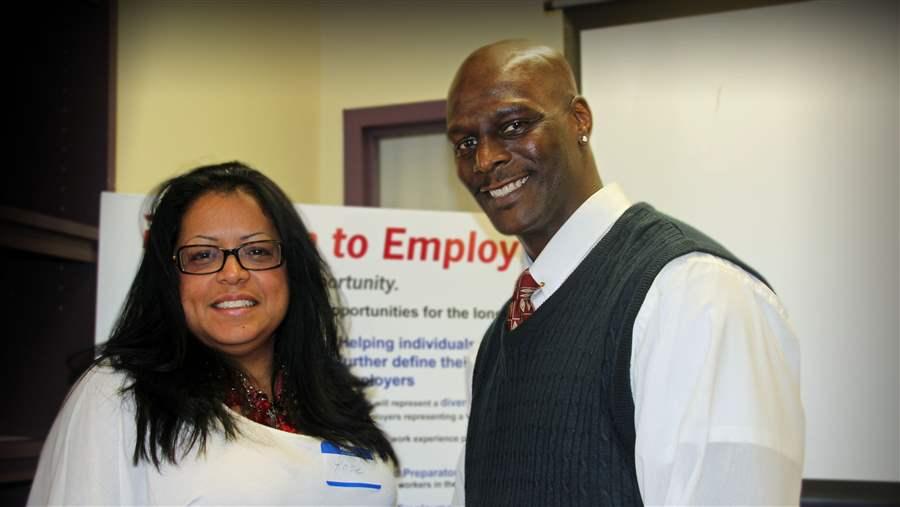 Tony Stanley (R) and Rose Vargas are hoping Connecticut’s “Platform to Employment” program will help them out of long-term joblessness. Those who have been out of work for more than six months are the hardest to hire, but states are trying new ways to help. (Elaine S. Povich)

BRIDGEPORT, Conn.—Maybe it was Tony Stanley’s furrowed brow that was keeping him from getting a job. Or maybe it was his work history in many fields instead of just one. Or maybe it was that he was aiming too high, or maybe too low.

The 50-year-old Norwalk resident has worked in a mental health center and as a security company employee, but has been unemployed for almost a year, nearly six months longer than what the federal government defines as “long-term unemployment.” Imposing, athletic and impeccably dressed, Stanley picks up pocket change by refereeing high school basketball games, but he doesn’t have a full-time job.

The overall unemployment picture has improved consistently since the end of the Great Recession, but the plight of the long-term jobless has proven difficult to address. With federal help, states are taking steps to help this population: In mid-October, the U.S. Department of Labor handed out about $170 million in grants to 23 agencies in 20 states for programs targeting the long-term unemployed.

Some states are using the money to try new ideas, including New Jersey, which got money from the federal pot to add to its “Jobs4Jersey” training program, which includes a one-stop website with job training links and job leads, as well as a job-matching service for employers and potential workers.

Utah has tried to lure more employers to the state by keeping business taxes low and by eliminating many business regulations. When the state is successful, it helps unemployed people pay for the training required to fill the new jobs.

Stanley hopes to benefit from “Platform to Employment,” Connecticut’s five-week job readiness program, which includes behavioral health services, financial coaching and an eight-week subsidized work experience. One of things the program teaches participants is how to look attentive, but not hostile, in a job interview. During one seminar session, instructors singled out Stanley’s furrowed brow as a problem.

“I bring a lot to the table,” he insisted, but there was desperation in the words. “They keep telling me I’m over-qualified. I need to get something, it’s been really rough. I don’t just want a job, I want a career.”

Connecticut has partnered with the The WorkPlace, a nonprofit organization that has run similar Platform to Employment programs in other cities and states. Connecticut is the first state to fund the organization’s programs statewide, with a one-year appropriation of $3.6 million. Those funds are expected to assist up to 500 unemployed people who have exhausted their unemployment benefits. 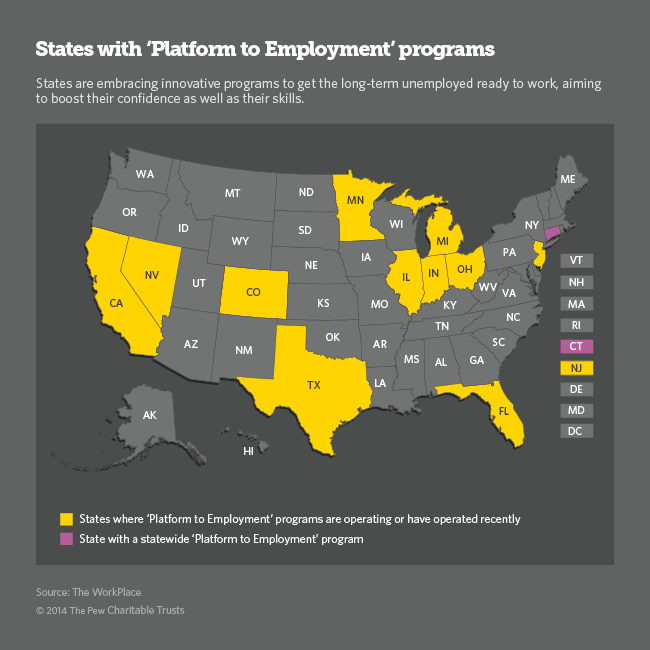 The subsidy, which pays the workers’ salaries for the first month or two of employment, is a critical part of the program, allowing potential employers to take on the long-term jobless with little risk. If the new employee doesn’t work out, the employer can let him or her go, having invested nothing. But the program reports about a 90 percent success rate in placing its graduates.

Joseph Carbone, president and CEO of The WorkPlace, said the program is designed to “deal directly with the barriers caused by long-term unemployment. Those barriers include lack of preparation, loss of self-confidence, and the unwillingness of employers to take a chance on someone who had not been working for an extended period.”

Carbone sounds like a social worker, but his background is economics and city government. He can relate to the self-inflicted shame of the jobless. Years ago, he lost his job in the New Haven mayor’s office. After looking unsuccessfully for another job for months, he quit looking, became a devotee of the soap opera “General Hospital” and once drove 20 miles to a grocery store to avoid running into his neighbors, who inevitably asked him if he was working yet. He was jobless for eight months.

People accepted into Platform to Employment have demonstrated work skills in the past. They don’t necessarily need retraining, but they usually need an ego boost, practice with updating and tailoring their resumes, social media training and other skills to make them attractive to employers.

The program has worked in cities and areas of 11 states —California, Colorado, Florida, Illinois, Indiana, Michigan, Minnesota, Nevada, New Jersey, Ohio and Texas — and now Connecticut. It is involved in cities in Colorado and Indiana currently, and is about to start in two Nevada cities.

Sometimes, the program is supported with state dollars, and sometimes with money from donors and foundations.

During a recent class in Bridgeport, about 25 students sat apprehensively on folding chairs at a community center. They ranged from a 57-year-old former financial risk manager (a graduate of Choate Rosemary Hall, Brown University and Harvard Business School), to a 24-year-old recent college graduate laid off after his first job as an auditor for KPMG, an audit, tax and advisory firm. There was a 47-year-old bus driver and insurance salesman, and a 46-year-old single mother of three who was a former banking operations worker.

Rose Vargas, of Bridgeport, 46, who was laid off almost a year ago from her banking job, describes herself as “happily divorced,” but unhappily unemployed. She said she was “so close” to one job at a bank (she had three interviews) but it went to someone else with more experience.

“But I don’t take it personal,” she said. With the Platform program, she sees “something positive for once.” She’s hopeful, and that’s a new feeling.

It’s no surprise that the long-term unemployed are discouraged. Studies have shown that the longer someone is out of work, the harder it is to find a job.

According to a report by the Pew Research Center, one recent study that sent thousands of mock resumes to employers found that the longer a candidate had been unemployed, the less interested the employer was in interviewing the candidate. There was a particularly sharp drop-off in interest for candidates out of work more than six months.

Other studies have documented an employer bias. President Barack Obama, in signing up 300 companies early this year to pledge to hire the long-term unemployed, called it a “cruel Catch-22.  The longer you’re unemployed, the more unemployable you may seem.”

According to the Bureau of Labor Statistics, in October there were 2.9 million people who had been unemployed for six months or longer, or 32 percent of the unemployed population. In contrast, during the severe recession of the early 1980s, the percentage of workers unemployed for six months or longer peaked at 26 percent in 1983. There is some good news in the October report: Over the past year, the number of long-term unemployed declined by 1.1 million. But that number is deceiving, since many of those who were no longer classified as long-term unemployed had found only part-time work.

A report from the Brookings Institution earlier this year discovered that even when those people had found work, only 11 percent of them were “continuously” employed full time. One of the authors of the paper, Princeton economist Judd Cramer, said many of the long-term unemployed are caught in a “spiral not of their own doing. They were in the wrong place at the wrong time as the economy continued to go on and there weren’t job opportunities for them.”

“The scourge of long-term unemployment was something we weren’t used to dealing with in prior recessions,” Cramer added. He said that after earlier recessions, the unemployed usually got jobs similar to what they were doing before. This time, however, the recession left many categories of jobs behind.

According to the Pew Research Center, analysts offer many explanations for this phenomenon: an unintended consequence of extending jobless benefits; a mismatch between the skills unemployed workers have and what employers want; a breakdown in the efficiency of labor markets; or simply bad timing. No matter the reason, the long-term unemployed are in a bad place.

New Jersey is using the $10 million in federal money it got last month, plus $2.5 million in state money, to operate its one-stop website and to pay for partnerships with community colleges and businesses.

“We really had to work together to help the long-term unemployed,” said Aaron Fichtner, New Jersey’s deputy labor commissioner. Fichtner said the idea is to understand the needs of industry and train workers to fill those needs. One pressing need is for workers to fill advanced manufacturing jobs, which require computer or high tech skills. Metal fabrication, for example, is no longer a hand-tool job but a computer-aided design job.

“We are training people for jobs that exist,” he said. “Success is every time we help somebody actually get a job that allows them to rebuild their career and increase their earnings.” The four-year grant is designed to serve about 500 people. Fichtner said New Jersey also has a program to subsidize employers who hire the formerly long-term unemployed, but it does not fully fund their salaries like the Platform to Employment does.

Heeding research that says that the long-term unemployed are hardest to reach, even through the state’s “Jobs4Jersey” website, Fichtner said the state is intervening quickly in Atlantic City, where several casinos have closed, throwing thousands out of work. “The quicker we can reach people and train them, the better it is,” he said.

While Utah tackled the problem on many fronts, the governor aimed at building on his state’s “business friendly” climate, according to Michael Sullivan, director of communications for the Governor’s office of economic development. Herbert decided to keep the corporate and personal income tax at 5 percent, slice state regulation of business and reach out to companies to lure them to Utah. While the state did not give specific tax breaks to companies, it touted the atmosphere it already had, according to Sullivan. He said businesses appreciated the stability, what they call “predictable risk.”

Sadly for the laid-off workers in Connecticut, one of the biggest “gets” for Utah in the corporate world was Goldman Sachs, which has nine of its 11 divisions represented in the greater Salt Lake City area now, with about 1,800 employees. The company moved some of them from the greater New York/Connecticut area. According to a Reuters report this year, the average Goldman Sachs wage for new hires in Utah is 30 percent less than a comparable position in New York.

Kimberly Henrie, deputy director and chief operating officer for the  Utah Governor’s Office of Economic Development, said while the state does not provide corporate tax incentives, it does tailor other workforce programs to incoming industries. For example, the state funds equipment for colleges and universities to train students in a “custom fit training program” aimed at the needs of industries. The state program pays 50 percent of the costs of the training, while the company pays the other half, she said.

“We make it real for them,” she said.

For the unemployed, life is all too real. Edward “Ted” Smith, 57, the Connecticut financial risk management expert who graduated from Brown and Harvard, says he would be happy with a job earning “one third of what I was making.”

“I want to contribute, be part of a team and feel good about myself,” he said.