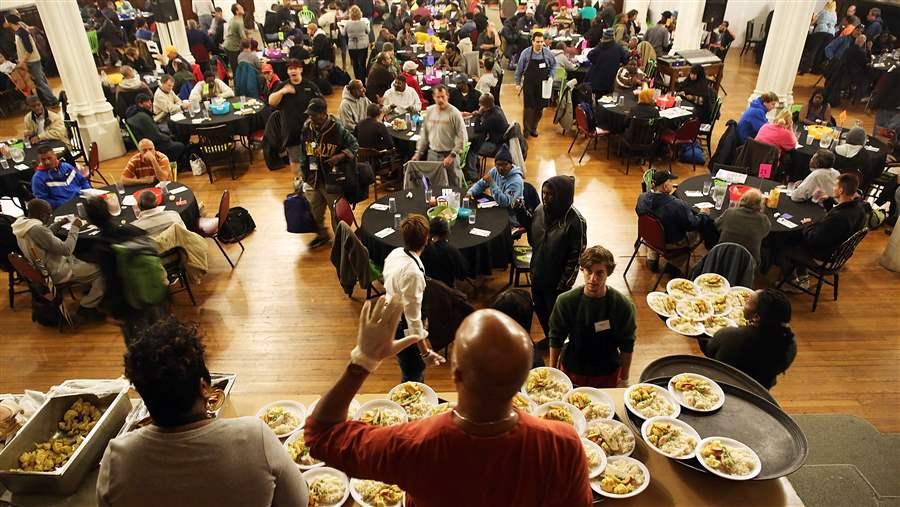 Lunch is served for the homeless and those in financial distress at Broad Street Ministry in Philadelphia in October. Philadelphia is one of 22 cities around the country that have enacted legislation restricting individuals and groups from sharing food with the homeless in public places. (Getty)

Right now, ground zero in the debate about policies affecting the homeless isn’t a large, bustling metropolis like New York or Chicago, but Fort Lauderdale, Florida, a small beach city of about 170,000.

On the one hand, there’s Arnold Abbott, a 90-year-old World War II vet and chef who has been feeding the homeless in the city’s parks and beaches for decades—and who says he has no intention of stopping, despite a new ordinance passed last month restricting feeding in public places. Efforts to stop him, including three citations in the past couple weeks, have drawn a national spotlight.

On the other hand, there is the very exasperated Mayor Jack Seiler, who says the city’s new outdoor feeding law is a part of a series of “very compassionate” ordinances addressing the plight of the homeless. He doesn’t want to ban public feedings that take place in the parks, he says. He just wants to move them indoors.

Thrown into the fray: Abbott’s request for an injunction against the city, citing a 2000 court ruling allowing food sharing in the city; a hunger strike by a member of the local chapter of Food Not Bombs to protest the new law; an online protest; a protest outside the mayor’s house and a bevy of activists lining up to be cited for what they call “rogue beach sharing.”  Even Stephen Colbert weighed in.

The battle isn’t unique to Fort Lauderdale. Since January 2013, 22 cities around the country, from Los Angeles to Atlanta to Philadelphia, have enacted legislation restricting individuals and groups from sharing food with the homeless in public places, according to a new report by the National Coalition for the Homeless (NCH). Nine more cities have pending legislation.

The report found that there has been a 48 percent increase in cities attempting to pass such laws since 2010. Since 2007, 71 cities, in 27 states or commonwealths, including Puerto Rico, have either attempted or successfully enacted such legislation. 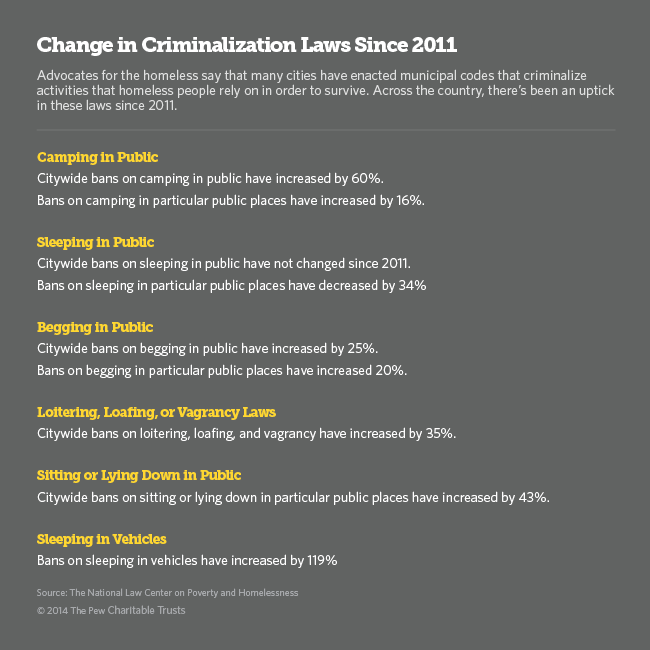 According to Seiler, the Fort Lauderdale laws don’t prohibit the homeless from being in public spaces. “We simply said no one area should have all these feedings. (The park was) essentially overrun with these homeless feedings.  Arnold Abbott (and his feedings) weren’t a problem, but we can’t make an exception for one person.”

But advocates say the laws criminalize poverty and homelessness and usually stem from pressure from business interests or from homeowners taking a “not in my backyard” stance.

“The real motivation of these laws is to make the homeless less visible in downtown areas,” Stoops said. “They hope such laws will force homeless people to seek help, which never works. If the homeless were all dressed up in nice suits and dresses, there would be no problem. Cities say it’s bad for tourism and economic development.”

At the same time, three states have passed a “Homeless Bill of Rights,” which outlaws discrimination against homeless people, particularly by employers and landlords, and affirms their right to use public spaces. The bill also upholds their right to sleep in parked cars, eat and exchange food in public, access restrooms at any time, obtain legal counsel and vote.

Rhode Island was the first state to pass the bill of rights in 2012; Connecticut and Illinois did so last year. A similar bill failed in the California State Assembly last year, and activists are lobbying hard for legislation in Oregon and Colorado.

If the states’ bill of rights seems to pit states against cities, that is deliberate, says Paul Boden, who was once homeless and how is now the director of the Western Regional Advocacy Project (WRAP), a coalition of social justice organizations in the Western states.

“This is our attempt to say local governments have abused their authority,” said Boden, whose organization worked on the failed California bill. “These were local ordinances, passed by local government, enforced by local police departments, heard in local court and incarcerated in local jails. At some point, the state needs to step in and say, ‘This is discriminatory. How can you write a law that says it’s illegal to sit down?’”

Homelessness is a seemingly intractable problem with roots in a variety of societal ills, from mental illness to substance abuse to unemployment and a lack of affordable housing. (It is a myth that the majority of homeless people are mentally ill; only a small percentage are. Nor are all homeless people unemployed.)

People experiencing homelessness often shun shelters because they feel they are not safe. Then again, according to the National Law Center report, in many cities, there aren’t enough shelter beds to house the homeless.

Consequently, the report found, 74 percent of the homeless population do not know how to find a place where it is safe and legal for them to sleep. Eighty-one percent reported being harassed by police for sleeping in public; 66 percent say they were harassed for sitting or lying down in public.

Statistics on the precise number of homeless in the U.S. often conflict. The federal government says the homeless population is decreasing, while homeless advocates say it is on the rise.

According to the U.S. Department of Housing and Urban Development, on a given night in 2013, their annual survey counted more than 610,000 homeless people. Advocates say the figure isn’t accurate since it counts the homeless at one specific point in time, and looks only at people who are in some type of shelter or are easy to spot sleeping in public spaces.

Large pockets of homeless populations are overlooked, said Tristia Bauman, senior attorney for the National Center on Poverty and Homelessness. “Homelessness is on the rise, thanks to foreclosure, prolonged unemployment and shrinking state resources.”

According to the National Law Center, family homelessness has increased since the start of the recession, and the ensuing foreclosure crisis, in 2007. According to a study released Monday by the National Center on Family Homelessness, nearly 2.5 million American children were homeless at some point in 2013.

The U.S. Department of Education reports that more than 1.1 million homeless children were served in the nation’s public schools during the 2011-2012 school year.

Nearly a third of the nation’s homeless are unsheltered, which means they are living in the streets and are vulnerable to being prosecuted for vagrancy, public urination and the like. It’s also much more difficult for them to find food on a consistent basis, as few agencies provide meals for the homeless three times a day.

“We strongly agree that homelessness is a problem,” Bauman said. “What we very strongly disagree with is using the criminal justice system to quote unquote ‘solve the problem.’”

To combat homelessness, advocates say that local, state and federal governments should invest in more affordable housing, including increasing the stock and availability of federally subsidized housing and funding the National Housing Trust Fund, which would provide block grants to states to provide housing for low- and very low-income households.

Some local governments have come up with innovative ways to curtail homeless. Nearly 10 years ago, Salt Lake City adopted a “housing first” model designed to eliminate chronic homelessness within 10 years.

The city created a system that provides housing to people in need of it—without stipulations such as staying sober. It also provides the new tenants with social service support so that they are able to stay in their homes. The state has reduced homelessness by 74 percent since 2005.

In Houston, police partner with mental health professionals and social service agencies to help the homeless with variety of needs, from housing to bus fare. In Ramsey County, Minnesota, a social worker embeds with the local police to serve as a liaison between police and the homeless community.

Cities do best when they confront homelessness head on, rather than enacting ordinances like food sharing bans that “hide it from public view,” said Jim Ryczek, executive director for the Rhode Island Coalition for the Homeless. According to Ryczek, getting legislators on board with the Homeless Bill of Rights was relatively easy. There was a public awareness of the problem, thanks to the existence of two tent cities in Providence.

“For the first time, people were seeing homelessness made bare as they made the drive to work,” Ryczek said. “It made it very visible. That makes public officials nervous.” But, he said, it also provides them with the opportunity to say, “Gee, this is part of who we are as a community and we need to do something.”

In Fort Lauderdale, feeding the homeless still takes place in a park located directly across from a 100-year-old women’s center and the public library, the mayor said, creating crowded conditions that are unsafe for both the homeless and other members of the general public. He said there were multiple complaints—“from children, families, tourists, you name it”—about the public feedings. Yoga classes had to be canceled at the center, and women and children couldn’t cross the park without an escort and residents regularly avoided the library, he said.

Seiler said he consulted with homeless advocates, churches, synagogues and mosques to come up with a solution, a series of laws that would restrict public feedings while authorizing all faith-based organizations to set up feeding stations for on their property, as well as providing other services for the homeless.

But Abbott, the 90-year-old activist, said hardly any churches have opened up their doors to let him and other volunteer groups feed the homeless. Moreover, he said, with about 10,000 homeless in the city, they don’t have the capacity.

“We are probably the most progressive city in Florida in dealing with the plight of the homeless,” Seiler said. “As a city, you step up and think you’re doing the right thing and a media distortion creates a whole bunch of controversy.”