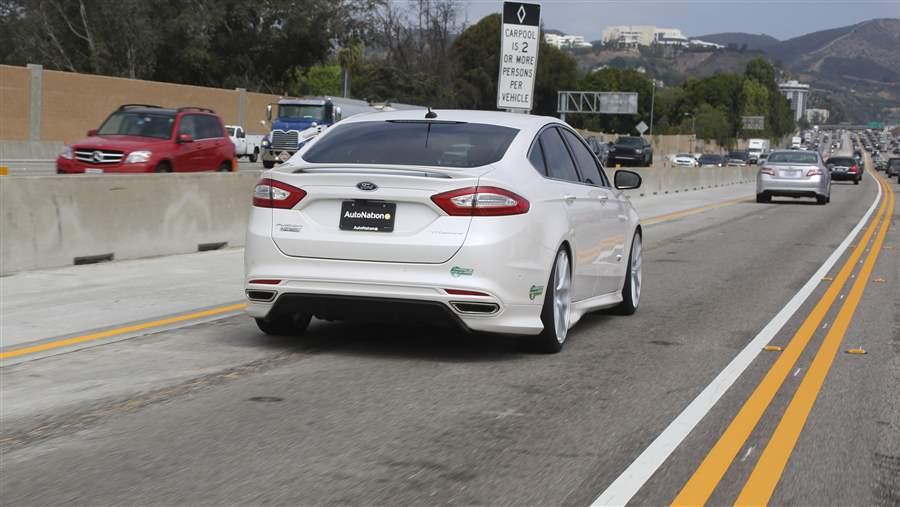 Commuters on Interstate 405 in Los Angeles. Many states and localities are pushing for more car alternatives as Americans drive less. (AP)

Jillian Golan got tired of paying repair bills for her 2001 Volkswagen Cabriolet convertible last year and started walking the 20 minutes to her job at a dialysis clinic in Philadelphia. A year and a half later, she hasn’t looked back, joining the growing ranks of people giving up cars for commuting.

“I’m saving a ton of money. No car payment, no insurance, no worrying about a parking ticket,” said Golan, 37. “If I were to buy a car again, I would have to cut back on a lot of things I do socially, and I’m not willing to do that. I have a lot of friends who don’t have cars or never had cars.”

Nationwide, the percentage of workers who commute by car declined from 88 percent in 2000 to 86 percent in 2010-2013, according to a Stateline analysis of census numbers.  Car commuting percentages were down dramatically in some urban areas, but also in smaller Western towns that are making a focused effort to promote alternatives.

People’s motives for ditching their cars vary. For people like Golan, saving money is paramount. Many millennials are motivated by environmental and health concerns, according to a U.S. PIRG report released last month. Some older Americans are eager to find alternative modes of transportation so they can maintain their independence when they can no longer drive.

Whatever the causes, state and local transportation officials are facing a new world after decades of increased driving. A Brookings Institution report in 2008 was among the first to note that driving in general, as measured by miles traveled, “began to plateau as far back as 2004 and dropped in 2007 for the first time since 1980.”

“The time has come for cities and states to shift their transportation priorities away from investments in expensive, unnecessary new highways, and toward the maintenance and repair of our existing infrastructure and the development of new transportation choices for Americans,” the study concluded.

In the Bronx, activists from Transportation Alternatives have been pushing for, and winning, concessions like car-free Sundays on the borough’s Grand Concourse arterial, safer bicycle paths at the giant Co-op City development, as well as better protection for pedestrians and bicyclists on local bridges.

The District of Columbia had the largest drop in car commuting of any county or state. Meanwhile, the percentage of workers commuting by public transportation rose more than 5 percentage points to 39 percent. Bicycle and walking commuters also are up.

“We also experienced a resurgence of population and jobs in walkable urban neighborhoods that had previously been in decline,” Emerine said. “There are more people walking, biking and taking transit because there are simply more people living and working in walkable, bikeable, transit-accessible neighborhoods.”

The changes are not without controversy, especially when they involve cutbacks for parking, which the AAA, formerly the American Automobile Association, has objected to in the District.

“There are only 17,000 metered spaces in the District now. There’s a huge pent-up demand. Billions of dollars are leaving the city because people can’t shop, dine, or go to the cinema in the city,” said AAA spokesman John Townsend.

Western areas known for wilderness and a car-loving culture also are seeing big decreases. In Oregon, Washington and Colorado, the percentage of workers commuting by car dropped by either 3 or 4 percentage points.

The car commuting rate in Teton County, Wyoming, with its breathtaking mountain views and world-renowned skiing at Jackson Hole, dropped from 79 percent to 70 percent. No other county saw a larger decline.

“We took a number of actions between 2000 and 2010 with the intention of changing the mode of travel away from the auto, particularly for the work trip in our area,” said Michael Wackerly of Southern Teton Area Rapid Transit. Some of the steps included providing commuter buses to get workers from neighboring Idaho, bus passes for Teton Village employees and higher parking fees to encourage bus use.

For Teton County, the motivation was largely environmental. “A transportation system oriented toward automobiles is inconsistent with our common values of ecosystem stewardship, growth management and quality of life,” said the county’s 2012 master plan

The Western Greater Yellowstone Consortium, a four-county partnership in Wyoming and Idaho, cites the expectations of Eastern tourists, many of whom come from cities where driving is falling out of favor.

“A growing percentage of those visiting our National Parks from the nation’s urban centers and other countries expect to have alternatives to driving a private vehicle,” the group said in laying out its transportation goals.

Boulder, Colorado, also has been pushing alternate forms of transportation. With a network of bicycle and pedestrian paths, and “path ambassadors” to spread the word, the county has seen car commuting drop by 9 percentage points to 72 percent.

Michael Benami Doyle, an urban planner who blogs about car-free living on Chicago Carless, never learned to drive growing up New York City and still uses buses and Chicago’s rapid transit system, called the el, to get around the city. “I never drove, so it’s not like I gave anything up,” Doyle said.

Doyle said New York City has an advantage in public transportation planning because its Metropolitan Transit Authority is a New York state agency that serves a 5,000-square-mile area fanning out from New York City through Long Island, southeastern New York state and southwestern Connecticut. In contrast, Chicago and other urban areas often have competing city, county and state visions.

“The planners always say they should be consolidated, and the politicians always say ‘no.’ They all want control,” he said. “It’s more about the whims of local politicians and less about regional planning.”

California, where Doyle wants to move next, has a reputation for reliance on cars and freeways. But it also has a rapidly expanding light rail system.

“They have five rapid transit rail systems under development – that’s more than I can remember anywhere at one time,” he said. “They have a problem with communication. They have all this public transportation and nobody knows about it. But the young people know.”

Several studies have noted that millennials are driving less than earlier generations, and making shorter car trips when they do. People between the ages of 16 and 24 are the least likely to use cars, but driving is declining among all groups younger than 55, according to census data.

The AAA acknowledges the generational divide but warns that it could just as easily change in the future, and localities could regret cutbacks in parking.

“This is the first generation we’ve seen since World War II that just isn’t into cars,” said AAA’s Townsend. “D.C. is hot right now.  It’s where your young Ivy Leaguers are going. But what happens when we start aging again?”

The health benefits of fewer cars on the road, for commuters and the rest of the community, are well-established. In large cities, traffic congestion costs about $91 billion annually, including health care costs and wasted time and fuel, according to a 2010 study by Boston University. Researchers in Atlanta found an immediate drop in the city’s childhood asthma attacks when streets were temporarily blocked for the 1996 Olympics.

A study this year in the international journal Preventive Medicine concluded that active commuting, like walking or bicycling in childhood and early adulthood, leads to a healthier lifelong pattern of activity.

Commuting by car is also associated with spikes in blood pressure, blood sugar and weight gain, according to a study in the American Journal of Preventive Medicine, which called car commuting “a habitual form of sedentary behavior.”

Nevertheless, the American love affair with cars is far from over. Lindsey Darden, a young woman in her 20s who wrote a blog called Adventures of a Car-less Valley Girl in Los Angeles when she lived in the San Fernando Valley, posted a photo of her Honda Fit last month when she moved to West Hollywood.

The arts writer said she found her new home’s bicycle lanes more unsafe and bus service inadequate for work, events or “being somewhere in a hot second.”

“I really do appreciate the experience I had without a car – nine years’ worth,” she wrote. “It truly gave me an edge on how to behave on the road. Pedestrians, bicyclists, and unpredictable drivers and all things to be aware of, and it’s all too easy to forget that.”