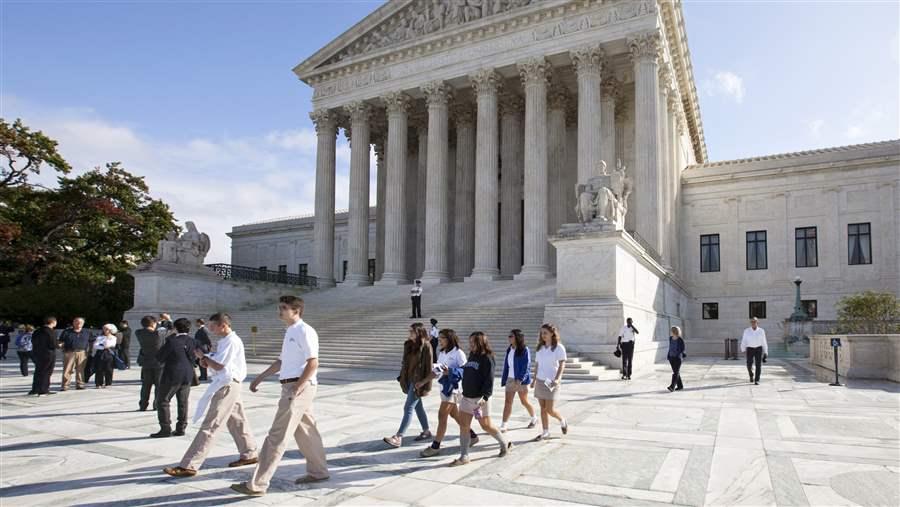 Visitors line up to enter the Supreme Court in Washington last month. The justices are preparing to settle a tax dispute between states that could shake up the status quo nationwide. (AP)

This article was updated to include arguments from Wednesday's Supreme Court session and to clarify that the 1978 case involving Iowa had to do with taxing business income from certain sales.

The U.S. Supreme Court today heard arguments in a long-standing interstate tax dispute, the outcome of which could cost one state tens of millions of dollars and potentially shake up a fragile balance among states over how they tax their residents’ income when they earn it elsewhere.

The case comes out of Maryland, brought by a couple who sued over how the state taxed income they earned out of state. Maryland — like every other state with an income tax — offers a credit to taxpayers on their income tax bills for what they pay in taxes where the income is earned.

But unlike the others, Maryland’s credit is only partial. It offers no credit on a small part of its income tax that is distributed to counties, meaning that its residents pay taxes on the same income twice.

The plaintiffs in the case say the practice is unconstitutional, citing a string of cases that have generally blocked so-called double taxation, often in the name of protecting interstate commerce. The argument is that through its double taxation, Maryland creates an incentive for its residents to work only in Maryland.

During Wednesday’s arguments, Chief Justice John Roberts and Justice Samuel Alito seemed troubled by the potential threat to interstate commerce. Alito cited a submitted brief arguing that Maryland’s tax “operated exactly like a tariff.” Roberts later said that if every state did what Maryland did, “that sounds to me like a tariff.”

But the acting solicitor general of Maryland, William Brockman, said his state should not have to change its tax practices in deference to those of another state, even if there is a concern over double taxation.

“There is no reason a state should have to subordinate this taxing power,” Brockman told the justices. Further, he added, “Maryland is not required to provide a credit at all.”

Justice Antonin Scalia seemed to welcome the point. “That’s my problem with this,” he said, referring to the thinking that one state would have to give in to another’s tax decision. Scalia said opponents were citing “imaginary” constitutional arguments to back up their claims.

The U.S. and Maryland chambers of commerce, the Tax Foundation and the American Legislative Exchange Council (ALEC), which lobbies for conservative causes, agree with the plaintiffs. Maryland, the federal government, the Multistate Tax Commission (a membership group of state departments of revenue) and others defend the practice. Click here for a full list of the briefs filed in the case.

For decades, states have operated under the assumption that double taxation is not allowed, hence their practice of offering credits for taxes levied by other states. But experts say the core question of whether states are forbidden from taxing income twice has never been truly settled.

As they see it, the uncertainty applies to every state’s tax system, and pits federalism and state sovereignty against principles of free trade that have governed more than two centuries of commerce among states.

“It’s a fundamental, foundational question,” said Bradley W. Joondeph, the associate dean for academic affairs at the Santa Clara University School of Law, who wrote his own preview of the case. “When you have a state being told that its income tax system, which is in many respects critical to its raising of revenue, is unconstitutional, that’s something that’s going to get the court’s attention.”

The question is more than a legal abstraction for the states involved. For Maryland, there could be serious fiscal consequences: It is estimated that a ruling against the state could force counties there to refund more than $190 million in taxes paid in past years, plus interest, along with about $50 million each year in credits going forward if its current tax scheme is struck down by the court.

For all states, and their taxpayers, the implications are potentially even greater if the court upholds Maryland’s tax. Seventeen states have similar income taxes distributed locally, according to the Tax Foundation, and most offer credits for taxes paid elsewhere.

The 43 states with a state income tax offer a deduction for taxes paid elsewhere. As the foundation’s Joseph Henchman put it, “they probably do so because they think they have to, constitutionally.”

What would happen, then, if the court clearly rules that that’s not the case?

One outcome could be that very little would change, said Helen Hecht, general counsel at the Multistate Tax Commission, a group that is backing Maryland.

Without any kind of constitutional mandate or Supreme Court mandate, states have granted credits, she said. “We don’t see any reason why they won’t continue to do that, because it’s really a political issue. I don’t think from a political standpoint there’s any reason to think that would change.”

Others aren’t so sanguine. “The question in this case is whether or not states have to give their residents credits for taxes that they pay in other states,” said Walter Hellerstein, a tax law expert at the University of Georgia Law School who wrote the Maryland Chamber of Commerce’s brief in the case. “Guess what? Every other state does.”

Hellerstein said, however, that states might pursue a different course if the justices rule for Maryland. He pointed to a case decided in 1978 that dealt with how states apportioned taxes on business income from certain sales. In that case, 44 states out of 45 with such a tax apportioned it a certain way, with Iowa the exception.

The court in that case ruled for Iowa, rejecting arguments that the state’s unusual tax practice led to double taxation and constituted a tariff. In the years that followed, this uniform income tax system disintegrated as other states followed Iowa’s lead and set up their own systems.

Maryland and its allies see that as a proper outcome in this case. Even if they wouldn’t advocate for widespread double taxation, they say states should have the right to impose the taxes they want, without having to worry about being forced to offer credits because another state decided to impose a tax on income generated within its borders.

As their argument goes, the state where someone lives is expected to provide a range of services, and the state should be able to raise money to pay for those services. What’s more, they argue, if the taxpayers who live there don’t like it, they can vote to change the law.

That would hardly be a welcome outcome in today’s Maryland case, Hellerstein said, especially for those worried about free trade and promoting interstate commerce. “This is a very simple case in terms of tax policy,” he said. “There’s only one answer, because we don’t want double taxation.”

But, he added, “If the states don't think they have to give credit for other states' taxes because they think that’s what free trade principles demand, then who knows?”

Before the case reached the justices, the highest court in Maryland, its Court of Appeals, sided with the couple and struck down the tax.

“Maryland is an outlier here, and the other states are not here to defend its tax,” said attorney Dominic Perella, who is representing the plaintiffs. Perella pointed out that 42 of the other 43 states with income taxes offer credits for income taxes paid elsewhere. “A tariff is the quintessential unconstitutional tax.”

A ruling is expected by the end of the court’s term next year.