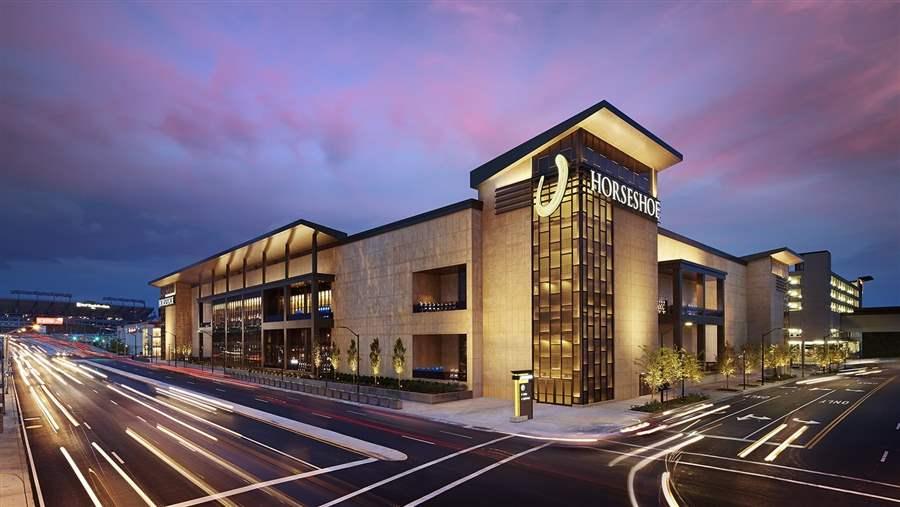 Maryland’s fifth casino, the $442 million Horseshoe, opened in August. In authorizing casinos, Maryland, like some other states, created a fund to help address problem gambling. (AP)

Michael Rosen, an admitted gambling addict, is well-acquainted with the danger of proximity to temptation. Twice during substantial periods of abstinence, he found himself – by chance, he insists – staying in hotels with casinos. And both times, he didn’t remain in his room. “I couldn’t resist,” he said.

Now 71 and “sober” since 2008, Rosen is a coordinator with the Maryland Center of Excellence on Problem Gambling. His job is to help others with a gambling problem get the help they need to prevent gambling from wreaking havoc with their lives. For many, that help may be the resolve to stay away from one of the five casinos that have sprouted in Maryland since voters approved casinos in 2008.

The center’s funding originated with the state legislation that authorized casinos, which is similar to legislation in many other states where gaming is allowed.

It is a paradox: On the one hand, states expose tens of thousands of their residents who are susceptible to gambling addiction to temptation—a temptation that is aggressively marketed to them. On the other hand, states are also offering to help those citizens who succumb. 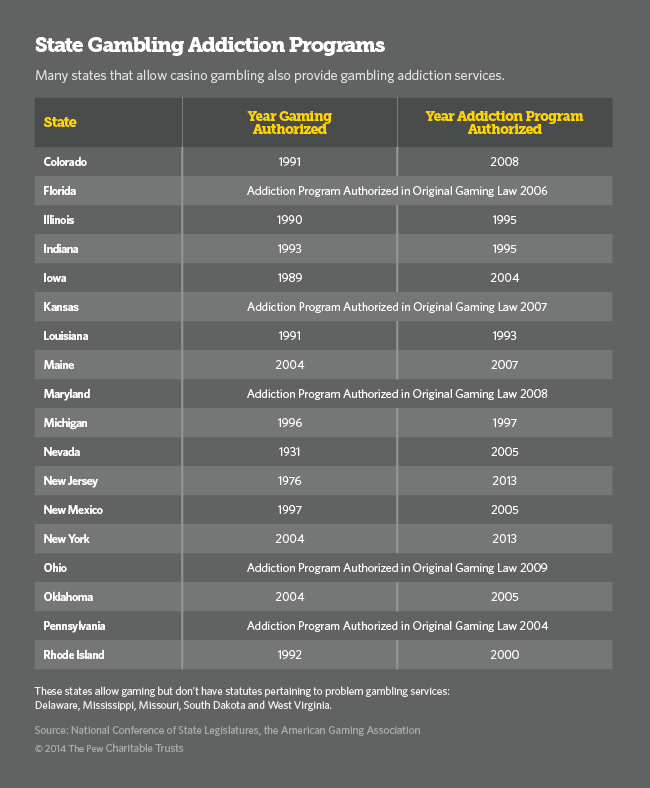 Numerous studies have reported that between 3 percent and 6 percent of American adults are so-called problem gamblers. But investigators at the Research Institute on Addictions at the University of Buffalo found the rate doubles in populations living within 10 miles of a gaming establishment.

In response, many states have tied the expansion of gambling to programs to mitigate the effects of problem gambling. Maryland, for example, assesses casinos $425 for each of the slot machines they operate and $500 for each table game. The resulting revenue, between $4 million and $5 million a year, is split between the Center for Excellence, which runs a gambling addict hotline, trains counselors in gambling addiction and does public education (including to adolescents in the public schools), and the University of Maryland, where researchers will study the epidemiology of gambling addiction, a subject addressed far less than substance-related addictions.

The fund is small change compared to how much revenue  Maryland casinos bring in. According to the Maryland Lottery and Gaming Control Agency, in fiscal year 2014, the four casinos then operating in Maryland (a fifth, the Horseshoe, opened near downtown Baltimore in August) generated $833 million in gross revenues, which produced $328 million for the state’s education trust fund.

By comparison, Massachussetts, where the first casinos will open in 2017, requires that each casino (so far, the state has authorized three) pay $5 million into a public health trust fund for problem gambling. The fund will also receive 2 percent of annual casino revenues, which are anticipated at $300 million to $500 million.

Keith Wythe, executive director of the National Council on Problem Gambling, considers Maryland generous in its financial commitment to problem gambling services. That doesn’t mean he believes it’s enough. But doing something, he said, is better than doing nothing, which is what most states historically did when it came to problem gambling. The question, Whyte said, is whether states are meeting the need produced by the increase in gaming.

“I think Maryland will spend something like $2.5 million a year (on gambling addiction services), which is good compared to the massive $14,000 a year it used to spend,” Wythe said. “But it’s based on an arbitrary tax on machines, rather than an independent needs assessment.”

If a state hasn’t researched the impact of the new gaming houses in the communities where they are located, he said, it can’t know if its funding of gambling addiction programs is adequate.

While Whyte praises Maryland for trying to build a statewide network of counselors, he notes that other states, such as California, Connecticut, Indiana, Missouri and Oregon, are providing funding for the treatment of individuals. In Connecticut, for example, the state offers free gambling addiction treatment at 16 locations. That is important, Whyte says, because most insurers don’t reimburse for it.

On the other end of the spectrum are states, such as Texas and Virginia, which Whyte said have “extensive legalized gambling and little or no formal spending on treatment.”

Lori Rugle, program director of the Maryland Center, agrees that Maryland needs to better understand the effect gambling has on individuals and communities. “We need from a public health perspective to be sure we are adequately funding the consequences of increased gambling,” she said. “We don’t have near adequate data on that.” More research is also needed to produce evidence-based treatment models, she said.

Rugle’s center – with four full-time employees -- is not a treatment center but a resource for helping to train Maryland providers on gambling addiction and treatment. Its website initially featured a directory of counselors in the state, but that was taken down after the Capital News Service reported this summer that at least half of the listings contained errors, such as wrong phone numbers or names of counselors who didn’t treat gambling addiction.

The center does not push abstinence, but a “harm-reduction” approach. As Rugle explained, that means helping problem gamblers establish limits that enable them to gamble without jeopardizing their assets, their families and their jobs. For many, that means cutting off their access to money, often by setting up direct deposit to an account that only a spouse or someone else can use.  In that case, the problem gambler and spouse may agree on an allowance for gambling.

But Rugle said many gamblers find it impossible to gamble in moderation, largely because scientists have discovered that gambling addiction is a biologically based disorder. The Diagnostic and Statistical Manual (DSM) of Mental Disorders, the text on mental illness most relied upon by the medical profession, health insurers and the pharmaceutical industry, reclassified pathological gambling alongside other addictive behaviors. Gambling is the only addiction listed in the DSM not related to a substance.

Maryland, like other states, also uses other tools for problem gamblers. Problem gamblers can have themselves barred from Maryland casinos, which may also bar them from affiliated casinos outside of Maryland. Violators can be arrested for trespass and lose their winnings. Once someone appears on the exclusion list, the casinos are also not supposed to entice them through any direct advertising.

According to the Maryland Lottery and Gaming Control Agency, the voluntary exclusion list includes 631 names. In September, there were 11 violations and nine in October.

The state also has a voluntary exclusion program for the lottery. But Steve Martino, head of the agency, said lottery violations are almost impossible to detect unless someone wins a big prize and tries to collect.

Laurie is a 50-year old gambling addict who asked that her real name not be used. She lives in Baltimore, not far from the gleaming new Horseshoe Casino that opened last summer down the street from the stadiums where the Orioles baseball team and Ravens football team play. A woman of modest means, she estimates she lost between $40,000 and $80,000 to gambling over six years before she quit two years ago and began attending Gamblers Anonymous meetings. Even before Horseshoe opened, she had herself banned from all the casinos in Maryland, West Virginia and Delaware. She had no choice.

“I knew that with (the Horseshoe) just 10 minutes or 15 minutes from my house, I would be a goner,” she said. “Every time I came up on I-95, my steering wheel would have turned in that direction.”