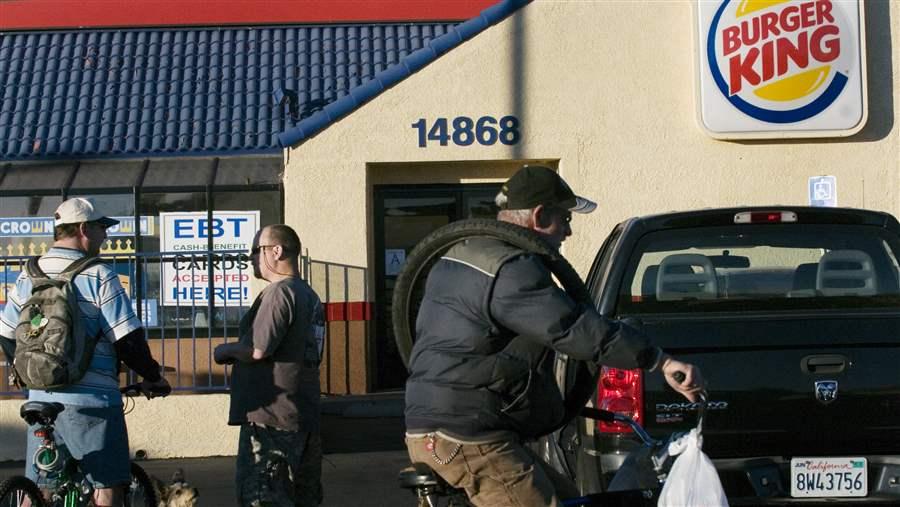 A large “EBT accepted here” sign is posted at a Burger King restaurant in Victorville, Calif. People who qualify for the Supplemental Nutrition Assistance Program (SNAP), commonly called food stamps, use Electronic Benefits Transfer cards to purchase food, but some people use them to turn a profit. (AP)

Backed by a $300,000 federal grant, South Carolina officials are trying a new approach to what they call a particularly insidious problem: food stamp trafficking.

The pilot program gained approval from the U.S. Department of Agriculture this fall, and if successful, could provide a model for other states looking to limit trafficking of food stamps, formally known as the Supplemental Nutrition Assistance Program (SNAP).

Officials use the word “trafficking” to describe the sale of food stamp benefits for cash, or the use of the benefits to turn a profit instead of to purchase food. They say stories about trafficking undermine public confidence in a program that, despite huge growth during the Great Recession, has seen other measures of error rates fall to historic lows.

“It’s what you hear about when people talk about SNAP fraud,” said Karama Bailey, South Carolina’s acting deputy for economic services in the state’s Department of Social Services. “It’s hard to identify. We know it’s going on, but we can’t quantify it.”

The core of the South Carolina plan is hiring an additional fraud investigator and assigning an assistant attorney general to focus solely on bringing felony trafficking charges against those suspected of the crime. It will be the first time the state has focused on charging food stamp recipients with fraud and appears to be the first effort of its kind in the country.

But critics worry South Carolina’s dragnet might lead to investigations or intimidation of those who’ve done nothing wrong. They question the seriousness of the problem, not to mention the wisdom of giving federal food stamp enforcement money to South Carolina’s social services agency, which has come under fire this year for mismanagement, seeking to limit what food stamp recipients can purchase and imposing new eligibility requirements.

“I feel like it came out of the blue, it’s not something I’ve heard we had a big problem with in the state,” said Sue Berkowitz, director of the South Carolina Appleseed Legal Justice Center. “There are so many things they could be doing that are client-focused, helping people access benefits (and) the right amount of benefits.”

The USDA, meanwhile, says the South Carolina effort is in line with its attempts to combat both sides of food stamp fraud. 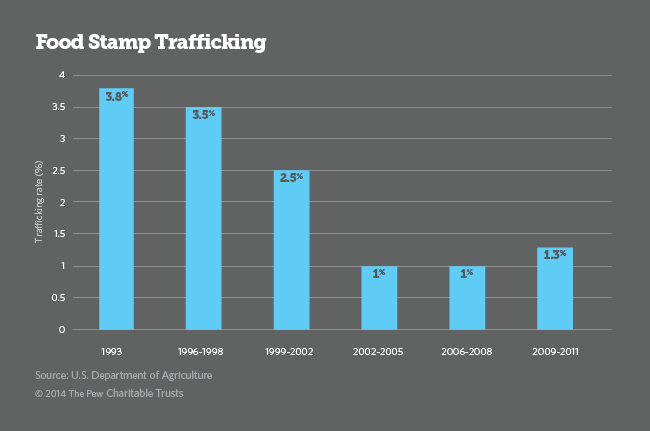 A Mixed Picture of Fraud

During the recession, enrollment and spending in food stamps skyrocketed nationwide. In 2008, the monthly average number of Americans enrolled was 28.2 million, and the cost of the program that year totaled $37 billion. By 2013, monthly average enrollment topped 47.6 million, and total spending for the year neared $80 billion. In the depths of the recession, a quarter of all residents in some states were enrolled in the program.

In the early 1990s, when the first trafficking estimate was calculated, around 4 percent of benefits were trafficked — about $811 million annually. Today the trafficking rate is down to 1.3 percent of the roughly $80 billion in current spending, or $858 million annually, according to the latest figures available from the federal government. Until now, federal and state anti-trafficking efforts mostly have focused on cracking down on retailers committing fraud, rather than on prosecuting specific recipients.

Trafficking is separate from other kinds of errors and fraud in the food stamp program, such as giving recipients too little or too much each month, or awarding benefits to people who are not qualified to receive them. In general, families of four with a gross monthly income of $2,584 are eligible.

Like trafficking rates, error rates have fallen. A decade ago, the rate nationally was 6 percent; today, it’s 3.4 percent. Many states have gotten performance bonuses and other grants for cutting down on error rates.

Likewise, federal officials have seen improvement in states’ handling of applications from those looking to receive benefits, as well as in how well states identify those who are eligible for the program and help them enroll.

The latest federal report found more than 10 percent of stores authorized to accept food stamps engaged in benefits trafficking, with the smaller stores accounting for just 15 percent of transactions, but as much as 85 percent of the fraud.

Officials also say the Internet and social media have made efforts to block fraud even more difficult and urgent. They report traffickers posting on networks like Twitter, Facebook and even Instagram in efforts to profit off the safety-net program. Officials say potential traffickers sometimes post advertisements for their food stamps, looking for someone willing to buy them for cash.

Historically, officials have targeted retailers: In 2013, USDA permanently disqualified nearly 1,400 stores from the program because of fraud violations. Through the third quarter of this year, nearly 1,100 additional stores have been permanently disqualified. Stores have been accused of giving cash in return for food stamp benefit cards, sometimes at half the value being exchanged.

South Carolina will focus to the other side of the trafficking equation by seeking out individual food stamp recipients it suspects of trafficking. Just a year ago, there was only one fraud investigator for the whole state. Now there are three, and the grant will make four.

But perhaps the true power of the grant will come from another position: the special state prosecutor dedicated to levying trafficking charges. In the past, such cases were brought rarely, and only as part of broader cases against retailers, said Eva Gourdine, special agent in charge of the state’s DSS Investigations and Criminal Records Unit of the Division of Investigation. Most were handled administratively, outside of criminal courts.

“We get a lot of calls in, and it’s been kind of tough,” Gourdine said of reports of trafficking received by the department. “It’s hard to catch them in the act of doing that, so now we’re trying to find a way to put some emphasis on client trafficking.”

“This is another way to protect the integrity of the program,” she added.

Beyond investigating localized reports of fraud, and monitoring social networks for signs of trafficking, the investigators and prosecutor will also comb through transaction data to try to identify potential fraud in purchasing patterns, Gourdine said.

Already, officials have two trafficking cases on their plate that exceed their self-imposed $2,500 floor on bringing prosecutions. Any fraud over $2,000 is eligible to be prosecuted as a felony in the state. Trafficking identified through the new effort under that amount will continue to be handled administratively and in lower courts.

Right now, state officials won’t speculate on how many cases they might eventually see. As Gourdine said, officials don’t know enough to make predictions, which is one of the problems they hope to fix.

“We’ve always gotten complaints about it,” she said. “But I can’t say how much was going on because we really don’t know.”

To the justice center’s Berkowitz, the state’s determination to harshly prosecute crimes it doesn’t know much about is troubling. She has been meeting with public defenders and legal aid groups to prepare to help food stamp clients who might be prosecuted.

“I’m not sure why USDA felt this was a good use of their money,” Berkowitz said. “There are a lot of other things that our state should be focusing on as far as figuring out why they have not been successful.”