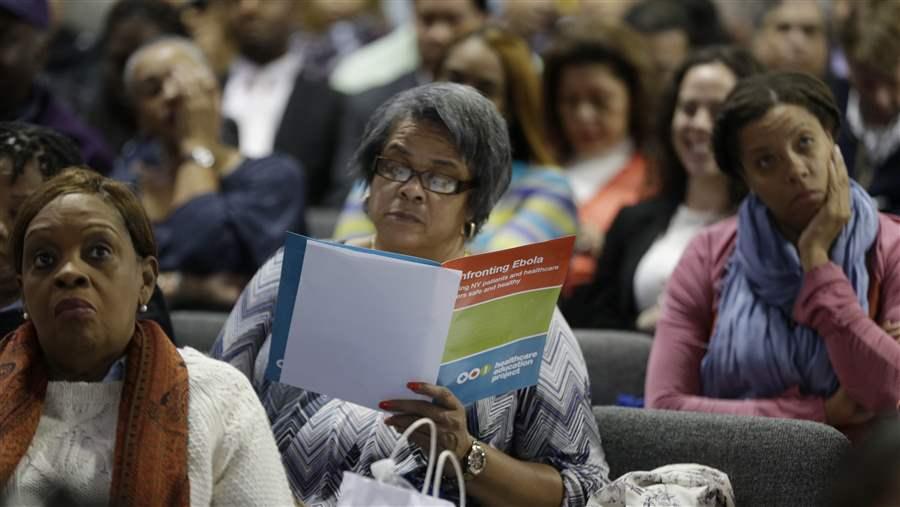 Thousands of participants, mostly health care workers, attended a seminar in New York in October to review basic facts about Ebola and updated guidelines for protection against its spread. Recent budget cuts may make it harder for state and local public health agencies to carry out efforts to prevent an Ebola outbreak in the U.S. (AP)

Dwindling resources may make it difficult for public health departments across the country to carry out intensive airport screenings, patient monitoring, public education and other preparations for a potential Ebola outbreak in the U.S.

Since 2008, diminishing federal funding for public health preparedness has meant the loss of 51,000 state and local public health jobs – more than one in five, according to a new survey by the Association of State and Territorial Health Officials. Congressional hearings to consider additional funding to prepare for an Ebola outbreak in the U.S. are scheduled for next week.

“It’s critically important to have a sustainable infrastructure, tools and the necessary resources to effectively address all potential health threats to the public, not just Ebola,” said James Blumenstock, emergency preparedness officer for the Association of State and Territorial Health Officials. “Public health threats don’t come one at a time, especially this time of year.” 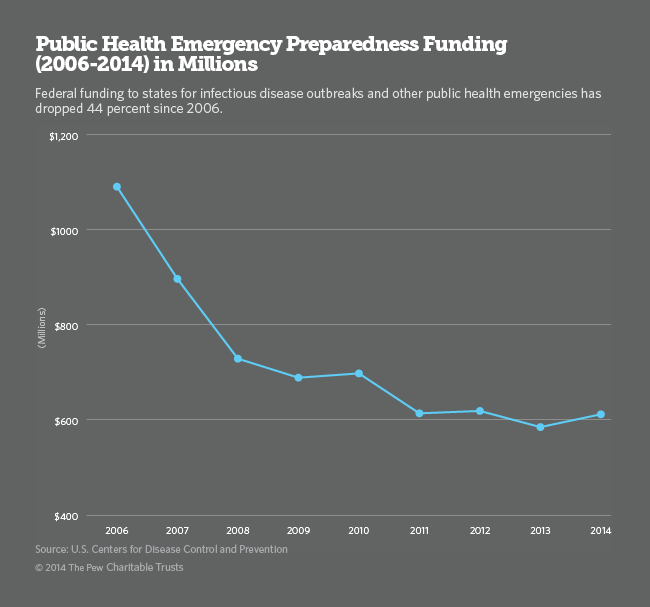 The primary source of money for such efforts, the CDC’s Public Health Emergency Preparedness cooperative agreement, began after the 2001 terrorist attacks in New York and Washington, D.C. to better prepare the nation’s public health system in emergency situations. But since then, funding has dipped from a high of more than $1 billion in 2006 to $585 million last year.

Another funding stream, the federal Hospital Preparedness Program administered by the U.S. Department of Health and Human Services, was launched around the same time to prepare health care workers for terrorist attacks, natural disasters, widespread foodborne illnesses and infectious disease outbreaks. But funding has fallen from $515 million in 2004 to $255 million this year.

“There is no uniformity among public health systems across the country,” said Jack Hermann, chief program officer of the National Association of City and County Health Officials.

Smaller jurisdictions may be more challenged because they have fewer resources, but they may have the advantage of everyone knowing everyone else. “Sometimes, the fire chief and the top health official are the same person,” Hermann said.

State and local public health agencies learned the hard way that they needed to develop “administrative preparedness” by streamlining the hiring and contracting process, he said. During the H1N1 (swine flu) pandemic in 2009-2010, Congress appropriated $1.5 billion to help state and local governments fight its spread. “It took too long to convert those emergency funds into services in the community,” Blumenstock said.  “We’re all optimistic we’ll do a better job of that this time.”

Last year, the CDC and other federal agencies, state health officials, nonprofits and research groups for the first time released a broad index of state public health readiness that goes beyond health agencies to include first responders, schools, volunteer organizations and other state agencies and community groups. The rating system, known as the National Health Security Preparedness Index, uses a variety of sources, such as CDC audit results and hospital data, to rate each state’s readiness on a scale of one to 10, with 10 being the best. The national average in 2013 was 7.2.

Part of the measurement is based on performance in real-life situations, such as preparing for a possible Ebola outbreak. This year’s report is scheduled for release later this month. 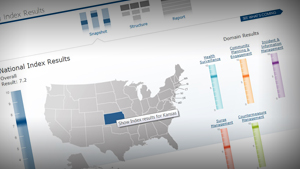 So far, the states hardest hit by the Ebola response effort have been those with airports designated by the CDC for screening of incoming passengers from West Africa: Georgia, Illinois, Maryland, New Jersey, New York and Virginia. “We’re not in a panic now, but we’re starting to get tired,” said David Trump, deputy commissioner for public health and preparedness in Virginia’s health department.

Trump said employees in his agency have been working overtime since August, and many have been reassigned. Some with administrative and other routine jobs are now on the front lines, contacting and monitoring people who have flown into Dulles International Airport from West African countries.

As many as 50 passengers arrive in Dulles each day from Liberia, Sierra Leone or Guinea. Most are returning U.S. residents and most are boarding connecting flights to a final destination outside of Virginia. As of last week, public health workers were monitoring 81 Virginia residents who had traveled from West Africa. That number is likely to rise in the next couple of months to between 200 and 300 and remain at that level for the foreseeable future, Trump said.

For passengers going to other states, U.S. Customs and the CDC coordinate with health officials in those states to ensure they are monitored according to their individual risk level. At least 40 other states have received one or more resident who has traveled from West Africa. According to the CDC, every passenger must be monitored for 21 days, most through phone calls at least once a day to check on their location, temperature and overall health. Only high-risk travelers, typically health care workers, who have come in direct contact with an Ebola patient must be seen in person by a public health worker.

In addition to active monitoring, Virginia and a handful of other states each have setup a “unified command” with the health commissioner in the lead role. Officials from multiple state agencies, including departments of public safety, homeland security and emergency management, education, transportation, environmental quality, port authority, aviation, social services and colleges and universities have been meeting twice weekly to coordinate Ebola-related preparedness activities.

Just last week, Trump said, a question came up about how to handle passengers who arrive on charter flights. He said other issues, such as finding a vendor to transport biohazardous waste and creating communications networks to effectively communicate with the public, have been discussed at the meetings.

Part of the work over the next couple of weeks, he said, will be to find out what funding is needed to sustain this effort for another year, or possibly two. “Right now there are a lot of people putting in 10- to 11-hour days. It’s not yet clear whether we are going to hire additional staff.”

Virginia may send more of its public health funds to Northern Virginia communities near Washington, D.C., where a disproportionate number of passengers from West Africa live. “We’re also looking at redirecting funds from other state agencies and waiting to see whether there will be federal funds,” Trump said.