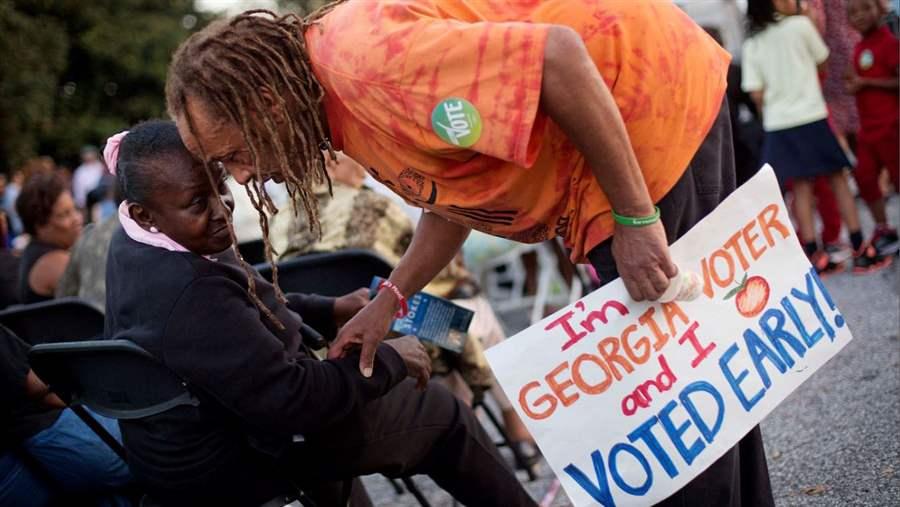 Alvin Dollar, of Decatur, right, carries a sign proclaiming he voted early as he talks with Dianna Green, of Atlanta at a Democratic rally encouraging early voting in Georgia. Georgia is one of many states with fiscal issues on the ballot this year. (AP)

Capping or outlawing state income taxes by referendum is either wise or foolish, depending on whom you ask. Voters in Tennessee and Georgia will decide for themselves on Tuesday when they consider two of the most interesting fiscal measures topping state ballots this election year.

Of the 146 referendums that are on state ballots this midterm election year, 21 involve tax or budget decisions, according to Ballotpedia, a nonpartisan tracker of ballot issues. Overall, there has been a downward trend in the number of referendums over the past few election cycles, as several states have made it more difficult to get an issue on the ballot. There were 184 in 2010, the last midterm election.  There were 40 fiscal measures on the ballot in 2010.

The revenue measures range from the income tax proposals in Tennessee and Georgia, to an increase in income taxes for Illinois millionaires to the repeal of a Massachusetts law that ties gasoline tax increases to inflation.

Political consultants and academics who study referendums say voters often support tax hikes that state legislatures won’t, such as raising taxes for specific education or transportation projects. But they also note that voters lack the overall view of state spending that legislators have.

It’s highly likely that the Tennessee and Georgia voters will side with those who want to keep income taxes low or eliminate them from the discussion, according to polling in those states and tax analysts.

In Tennessee, voters will decide whether to enshrine into the state constitution a law barring a broad-based income tax. The state taxes income from dividends and interest but not earned income. Proponents, including Republican state Sen. Brian Kelsey, who sponsored the measure that sent the issue to the ballot and who chairs the “Yes on Three” campaign, said the measure encourages fiscal responsibility.

“Being a low income tax has brought more economic development to the state,” Kelsey said.

But opponents argue the measure is shortsighted, and eventually may require the state to increase other taxes.

Michael Leachman, director of state fiscal research at the progressive Center on Budget and Policy Priorities in Washington, D.C., described the referendum as “a wild overreaction to a problem that doesn’t exist.”

“Here you put something into the state’s constitution, to foreclose the possibility that in the future you might want to – even temporarily – increase the state’s income tax to go through a very severe recession, for example,” Leachman said. “It is really wrong-headed. You don’t know what the future is going to bring.”

The measure must appear on the ballot during a gubernatorial election year. In order to pass, the question must not only get more “yes” votes than “no” votes, it must receive a majority of the votes cast in the governor’s race. If a voter casts a vote in the governor’s race, but then leaves the ballot question box blank, that essentially counts as a “no” vote on the referendum. Kelsey said that occurred in 2002 when the constitutional amendment to institute a lottery cleared the bar, but another constitutional amendment did not.

In Georgia, voters will decide whether to cap the state’s top income rate at 6 percent in the state’s constitution. The measure is likely to pass, despite similar arguments against it that it would put the state in a fiscal “straitjacket.”

Republican Senate President Pro Tempore David Shafer and other proponents insist the referendum will reinforce Georgia’s status as a low-tax state. The actual wording of the referendum is: “Shall the Constitution of Georgia be amended to prohibit the General Assembly from increasing the maximum state income tax rate.” The Assembly decided by a two-thirds vote in the recent session to send that issue to the voters.

Wesley Tharpe, tax and economic policy analyst for the Georgia Budget and Policy Institute, said locking in a low tax rate might be bad for the state in the future. “Today, the state has embraced having low taxes, some of the lowest in the country, but we have congested roads, an underfunded health care and education system. Georgians of the future might decide differently on funding education,” he said.

The Georgia legislature is one of many that sent contentious issues to the voters this year. Stateline has  reported lawmakers in 36 states have put at least 86 measures – both fiscal and non-fiscal – on the November ballot, according to Ballotpedia, the rest came from citizen initiatives.

One way to entice voters to increase taxes by referendum is to earmark the extra revenue for a specific area, like education. Both Illinois and Nevada have measures on the ballot involving schools. Illinois will decide whether to impose a surtax of 3 percent on incomes over $1 million earmarked for schools, while in Nevada, voters will decide whether to adopt a 2 percent margin tax on businesses that make more than $1 million, with the revenue going to support schools.

In Illinois, the measure is advisory and won’t commit legislators to following through, but Democratic Gov. Pat Quinn, assuming he gets re-elected, might persuade the legislature to enact it. The Illinois Legislature failed to approve referendum ballot measure to amend the state constitution to impose the tax, so it went with the advisory referendum.

“If this measure is approved, it may make it easier for (Quinn) to get the constitutional amendment,” said Brittany Clingen, ballot measures project director for Ballotpedia. That assumes that Quinn, who is locked in a tight race with Republican Bruce Rauner, survives the election.

The Nevada measure is complicated because it can be calculated several ways, and is the subject of an intense political fight, pitting the Nevada Education Association against the AFL-CIO, which initially supported the measure. Opponents argue it would dampen business in the state. Supporters say it would be good for teachers and schools.

Clingen says earmarking the money does make it easier for states to sell tax increases. “People like to support schools and children,” she said, citing the Nevada vote. “But there’s a real world effect on business.” She said the issue has attracted plenty of money, with opponents outspending the support side.

Jennie Bowser, an independent political consultant and an expert of referendums, says taking fiscal issues to the voters can be a “good way to make fiscal policy,” especially if state legislatures are reluctant to raise taxes. “You can achieve a policy goal that everyone’s in favor of but which is hard to finance.”

But, she noted, voters don’t have the “bird’s eye view” of the state’s fiscal situation overall. “They are picking and choosing the pieces they like, and they don’t necessarily fit together in a coherent way,” she said.

Bowser said some ballot issues are attracting big money from opponents and supporters. Oregon, for example, has a measure on genetically modified organism (GMO) food labeling which has attracted more than $23 million in contributions—about $16 million from opponents and $7 million from backers. An Oregonian poll showed the measure trailing by six points just a week before the election. All of the attention to the ballot issue is likely to drive up voter turnout, according to Bowser, who lives in Portland.

“There’s a whole lot of academic research that says having a ballot issue on the ballot increases turnout by 3 percent,” she said, noting that the GMO issue does “pump up voter attention and increase turnout.”

The issue is attracting big money from out of state, according to the Oregonian, including donations from corporate food giants like Monsanto and DuPont Pioneer. Each has given more than $4 million. On the other side, California-based Dr. Bronner's Magic Soaps and the Center for Food Safety Action Fund in Washington, D.C., have each given more than $1 million.

Massachusetts voters will get to decide whether to repeal a provision that automatically raises the state gasoline tax with inflation. According to the nonpartisan Institute on Taxation and Economic Policy, 14 states have a “variable rate” gas tax, while 32 states have fixed taxes (the others didn’t supply data).

A recent Boston Globe poll showed the state evenly divided on whether to repeal the inflation adjustment, with each side garnering 42 percent and the rest undecided. Massachusetts also has a referendum on whether to repeal casino gambling, and voters polled favored keeping the gambling, which backers say would raise millions for the state, by 53 percent.