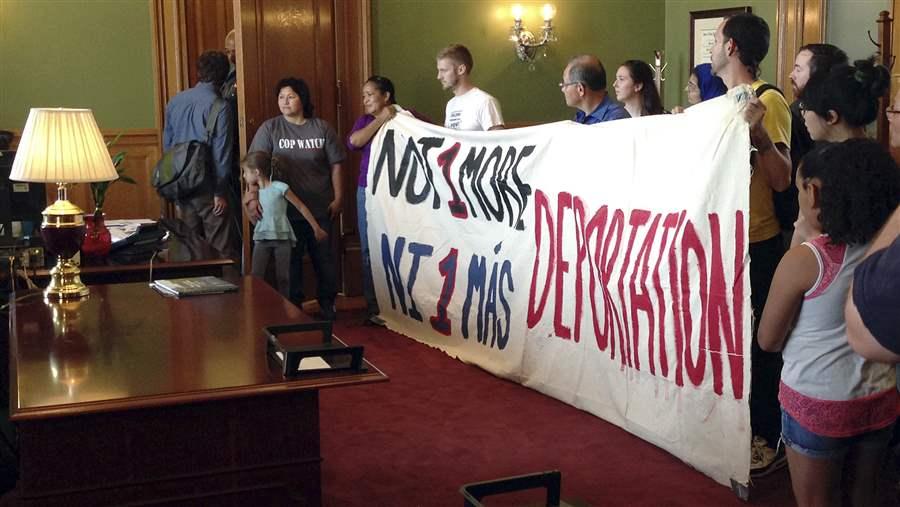 Carlos Rodriguez, a 27-year-old Dominican-born chef in New York City, thought he was safe from deportation because his wife and daughter are U.S. citizens and he had never been in trouble with the law.

Then he was arrested for trespassing in a friend’s apartment building last year, a charge that was later dropped. It was the beginning of an eight-month nightmare that started when immigration authorities took him into custody and worsened when they moved him to a detention center in New Jersey to await deportation. Because his wife is a citizen, Rodriguez qualified for a green card, but he didn’t know that until an advocacy group stepped in to help. Eventually he was freed from detention and allowed to remain in the country.

“I lost my job as a chef and my wife and daughter were about to lose the apartment because they depend on my job for the rent,” Rodriguez testified recently at a New York City Council meeting.

New York City decided in 2011 to limit or refuse cooperation with federal “detainers,” or requests from immigration authorities to hold someone for possible deportation. Almost 300 cities and counties plus the states of California, Colorado and Connecticut have done the same, according to the Immigrant Legal Resource Center, which tracks them.

A Stateline comparison of the center’s list with U.S. Census data shows that more than half of the nation’s 22 million noncitizens live in those jurisdictions, including such immigrant strongholds as New York City, Los Angeles and Miami. But other areas also with large noncitizen populations, including Harris County, Texas (which includes Houston), and Maricopa County, Arizona (Phoenix), do cooperate, at least officially.

The detainers are notices from U.S. Immigration and Customs Enforcement (ICE) requesting local police to hold a prisoner an extra two days for possible deportation, after the prisoner would ordinarily be released because the charges were dropped or bail was posted. In some cases, prisoners have been jailed longer—sometimes months—because bail was refused based on the detainer, or in some cases, prisoners opted not to post bail, hoping to postpone federal custody and deportation.

Federal immigration authorities began to use detainers in 1996. They became more common for more minor arrests when the Secure Communities deportation program, which became mandatory in 2012 after four years as a pilot program, required state and local law enforcement agencies to send fingerprints from every booking to immigration authorities for checks.

New York City was one of the first jurisdictions to question the detainers, said Peter Markowitz, director of the Immigration Justice Clinic in New York and co-author of a 2011 Berkeley Law School study of Secure Communities that became the basis for many arguments against detainers.

“It’s really gone from 0 to 60,” he said about the move to limit or refuse to cooperate. “A few years ago, nobody was doing it, then a few places like Santa Clara County, California, and New York City, and now there’s just an explosion.” Markowitz said state and local officials began to balk when they saw that many people were deported even though they had not committed serious crimes.

ICE says it deports about 133,000 people annually from the interior of the country, as opposed to deportations of those caught trying to cross the border, and that most of them have criminal histories. But criminal history can include strictly immigration-related cases like failing to show up in immigration court, or “recent border crossings,” according to ICE.

“A large percentage of these people have no criminal record,” said Markowitz. “Many of the people we represented were afraid of any kind of contact with authorities because of the close ties between New York City police and ICE.”

But many jurisdictions are still cooperating with the detainers, sometimes resulting in different outcomes for immigrants even in the same state. Baltimore Mayor Stephanie Rawlings-Blake, for example, has aggressively resisted detainers, saying she welcomes immigrants, but nearby Frederick County, Maryland, is one of the most cooperative jurisdictions.

“We all know there are people out there advocating that we not enforce any laws whatsoever,” said Frederick County Sheriff Charles “Chuck” Jenkins.

“If you’re arrested for any crime in my county, we put you in handcuffs and we ask you two simple questions: ‘What country were you born in?’ and ‘What country are you a citizen of?’” Jenkins said. “Everybody is treated the same.”

A Range of Policies

Frederick County is part of the 287(g) program, an enhanced partnership program with ICE that trains and uses local law enforcement to carry out some federal immigration laws, such as determining when a detainer is warranted. Since 2008, county officers have filed 1,311 immigration detainers, usually resulting in a transfer to federal authorities for possible deportation, although they don’t know how many actual deportations result.

At times, policies can clash within the same jurisdictions. Rhode Island Democratic Gov. Lincoln Chafee in July ordered state prisons and jails not to hold immigrant detainees for extended periods of time for possible transfer to ICE. This allowed one of them, Antonio Mejia of Mexico, to post bail for his charge of driving without a license after seven months in jail, and return to his fiancée and her children.

“It was a very difficult time for his family, including his parents in Mexico who depend on the money he sends,” said Will Lambek, one of the activists who pushed for a policy change on behalf of Mejia. “The faith and power of an organized community really paid off.”

At the same time, however, county sheriffs guarding courts allowed immigration officials to take prisoners directly from courthouses, resulting in the detention of another young man with a wife and children in the community, Lambek said. That loophole was closed, but too late to stop the deportation of Gustavo Arroyo of Guatemala.

Stories of mistreated immigrants and lawsuits holding localities responsible for civil rights violations have led some communities to rethink whether they should cooperate with immigration authorities.

Even Frederick County no longer holds immigrants for any longer than the original local charges warrant, after a federal court in 2013 found that Jenkins, the sheriff, erred in detaining a Salvadoran immigrant named Roxana Orellana Santos in 2008. Santos was questioned as she ate a sandwich outside her workplace, and officers gestured for her to remain seated while they checked her status, finding an immigration warrant. The court ruled that this warrant “did not provide the deputies with a basis to arrest or even briefly detain Santos.”

The American Civil Liberties Union has been active in questioning the validity of immigration detainers, challenging jurisdictions that still recognize them.

“We have sued multiple state and local entities for detaining people in violation of the Fourth Amendment and due process clause,” said ACLU attorney Jonathan Blazer, counting lawsuits against Los Angeles County, the state of Rhode Island and Lehigh County, Pennsylvania.

“Each one of those places had policies of complying with detainers at the time they detained the plaintiffs,” he said, “and all of these jurisdictions have since announced reforms to their detainer practices.”

The Pennsylvania case was key because a federal judge ruled in March that cooperation with ICE detainers was voluntary, and local officials could be held responsible if they violated a prisoner’s rights. The case was brought by Ernesto Galarza, a U.S. citizen born in New Jersey who was held on a detainer for three days over a weekend in 2008 despite posting bail for a drug charge and having a valid driver’s license showing his place of birth.

“Immigration detainers do not and cannot compel a state or local law enforcement agency to detain suspected aliens subject to removal,” the appeals court judge ruled, overturning a district court ruling that the police were required to comply with the detainer.

Galarza was not told why his release was delayed until three days after his arrest, when ICE agents interviewed and then released him. A jury later acquitted him of the drug charges.

Dona Ana County in New Mexico settled a lawsuit by two sisters last year who charged that they were illegally held for two months on an immigration detainer. After that, the county became one of the first border counties east of California to stop honoring detainers, and also voted to declare the county a “Safe International Community” where county employees are forbidden from asking anyone about immigration status.

Another case that drew widespread attention was that of Juana Villegas, who was shackled to a hospital bed in Tennessee while on an immigration retainer in 2012. She was awarded $200,000 in a civil suit against Nashville and Davidson County.

A federal court case that prompted new policies this year was one in Portland, Oregon that declared immigration detainers unconstitutional if they result in jail time longer than otherwise necessary for local law enforcement purposes. The court ruled that Clackamas County had illegally imprisoned a woman by telling relatives over a two-week period that she could not be bailed out because of an immigration detainer, which had actually specified only a 48-hour hold.

Miami-Dade County in Florida, with one of the largest immigrant populations in the country, noted in its resolution against full cooperation that extra prison time for immigration detainers had cost up to $1 million a year. Fewer than half of the 3,262 detainers the county handled in 2011, and 2,499 in 2012, involved felony crimes.

Some still think detainers should be respected and can be legally justified despite court rulings in specific cases. The Center for Immigration Studies, which favors limited, legal immigration only, says immigration officials should be more aggressive.

“There are places that are scared by the Oregon ruling and releasing people that they really shouldn’t,” said spokesman Jessica Vaughan. “Nobody can really look at the cases and say that ICE has been overzealous. It’s certainly not fair to them to say they’re deporting too many people.”

Blaze, the ACLU attorney, said the growing movement may be having an effect on ICE policy. Detainers have been more likely to focus on criminals than simply unauthorized immigrants, he said.