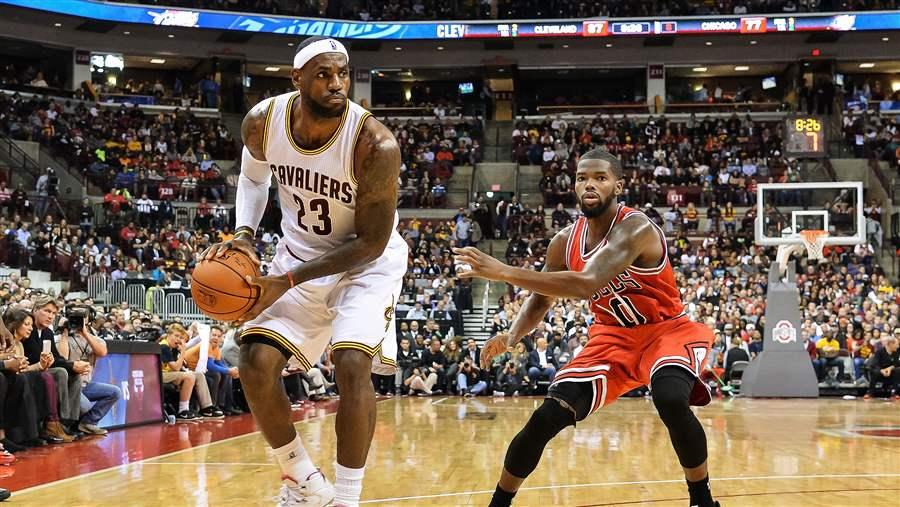 The Cleveland Cavaliers' LeBron James, left, controls the ball against the Chicago Bulls during an NBA preseason basketball game earlier this month in Columbus, Ohio. Ohio and other states collect ‘jock taxes’ on athletes when they visit to play road games. (Getty Images)

This story was updated to clarify that Tennessee's "jock tax" did not apply to football players.

When NBA stars like the Cleveland Cavaliers’ LeBron James and the Los Angeles Lakers’ Kobe Bryant play road games in states that levy income taxes, not only do they leave behind enduring images of slam dunks and buzzer beaters, they also leave behind large chunks of their paychecks in the form of “jock taxes.”

Technically, any city or state with an income tax could assess any visitor who earns money there. As a practical matter, however, it’s hard for states to track every business person who passes through. Not so for professional athletes whose schedules—and lofty salaries—are public.

While most star athletes who play the major professional sports (football, baseball, basketball and hockey) just figure the jock tax into their next contract negotiation, lesser players with lesser salaries also have to pay the tax, which can be burdensome. Some athletes are challenging the tax, claiming it violates the “equal protection” clause of the Constitution because it unfairly singles them out.

“I can understand it from a state revenue standpoint,” said Mark Goldstick, an Illinois tax specialist and CFO of Priority Sports and Entertainment, which represents athletes. “It’s another way to generate revenue from people who are working in their state.”

“The problem I have is they (visiting athletes) are not receiving benefits that other people in that state receive who are paying the tax. It’s unfair that the athletes get singled out,” Goldstick said. “If an attorney makes a million-dollar deal in that state, they are not made to pay the tax, they are not pursued. But the fact that an athlete was in the state is in the box score.” 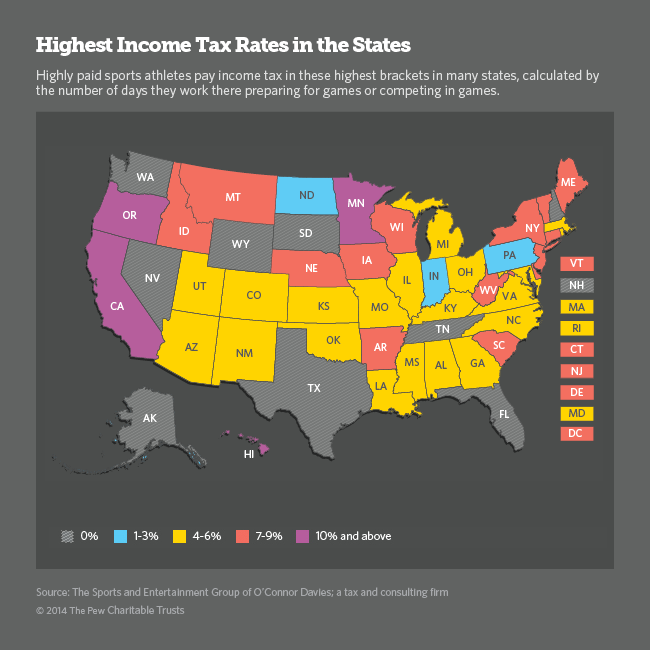 All but nine states have income taxes, but as Stateline reported last year, some of them have exemptions for short-term visits. States and cities that do levy the jock tax calculate it in one of two ways. Most states count “duty days,” or the total number of days an athlete works for the team, including games, practices, team meetings and other team-related activities. Then the state calculates the number of days the athlete engaged in those activities in that state, calculates the percentage of the athlete’s income earned there, and taxes that amount at the state’s rate for high income earners (the bracket into which most professional athletes fall).

Tennessee used to have a different way of taxing athletes, until the tax was repealed in steps earlier this year. It charged a flat rate for each professional hockey and basketball athlete who played a game there—$2,500 a game, with a maximum charge of $7,500 a year. The law did not apply to football players.

The repeal took immediate effect for professional hockey players, but was delayed until 2016 for basketball players. Instead of the state getting the income, the proceeds went directly to the home teams, which generally used the funds for upgrades to their playing or practice facilities.

Former Chicago Bears linebacker Hunter Hillenmeyer is challenging the Cleveland law in a suit that initially said the “games played” calculation was unfair because other jurisdictions use the “duty day” standard. He later amended his lawsuit to say the entire system is unfair. His suit said Bears players are treated differently from Cleveland Browns players and that that is “facially discriminatory” against all out-of-town players. Former Indianapolis Colts center Jeff Saturday has filed a similar case. Both cases are now before the Ohio Supreme Court.

In a brief filed in the Hillenmeyer case, Ohio Attorney General Mike DeWine argued that nothing in the “U.S. or Ohio Constitution bars the State from treating high-paid athletes differently from others by allowing a city to tax such athletes when they work in the city briefly but barring the city from taxing others who work in that city for the same amount of time.” He said tax law treats all kinds of classes of people differently – high income taxpayers and low income taxpayers, for example, or senior citizens who get property tax breaks that younger folks do not.

If the lawsuit is upheld, the city of Cleveland estimated it could lose about $1 million a year from visiting professional athletes.  In recent years, the city has collected about $300 million in income taxes annually.

Michael McCann, director of the Sports and Entertainment Law Institute at the University of New Hampshire, said establishing athletes as a “protected class” under the Constitution is difficult.

“Equal protection laws are often difficult for individuals who aren’t in a ‘suspect class’ in terms of race or gender,” he said. “The ‘rational basis’ for this case is to generate venue from individuals who are in the state to play a game.”

According to Chris Stephens, an analyst for the nonprofit study group Tax Foundation, it is difficult to calculate Hillenmeyer’s tax bill to Cleveland without knowing the team’s practice and meeting schedule, but if the “duty days” standard applied, it would result in a lower tax bill – something like the city calculating it on 1/170th of his income, rather than the 1/20th that could come from the “games played” standard.

But even the lower amount is unconstitutional, Hillenmeyer argued in court papers.

Stephens said the athletes are an easy target. “Their schedules are publicized; they (tax officials) know exactly when they are working there, they appear to be a very high source of revenue, and they can’t vote in” (the states where they play away games.)”

“It’s kind of a perfect storm there,” he said.

Stephens also noted that for the athletes, filing taxes in multiple states is unbelievably complex. Take the Lakers’ Bryant, for example, who, at $23.5 million a year, is the highest paid player in the NBA, according to Sports Illustrated.

Here’s how that would break down into jock taxes when he plays his one regular-season game in Cleveland against the Cavaliers, Feb. 8, 2015, according to Stephens:

Ohio would take the “duty days” he spends in the state (probably just one, though it could vary depending on when the team arrives and when it leaves), divided by the total number of duty days in the season (somewhere around 200 is a good estimate).

The city of Cleveland now puts another 2 percent tax on top, calculated this way: It takes the games played in the state (one), divided by the total number of games played in the season (82). The city would then take this percentage and multiply it by his total income ($23.5 million) to arrive at the portion of his income attributable to Cleveland ($286,585). The city would then multiply his Cleveland income by its tax rate of 2 percent to arrive at his jock tax bill for the city ($5,732). So Bryant would have a total combined city-state jock tax bill of $11,595 for his one day of work in Cleveland.

There’s one more wrinkle, California (Bryant’s home state) gives him a credit for the taxes paid in Ohio. But since California’s income tax rate is higher than Ohio’s in the top tax bracket, it’s not a wash—he would still owe taxes in California, but not more than he would normally pay overall.

This calculation does not take into account the “duty days” or games the Lakers might play in the pre-season or playoffs.

It Matters Where You Live

James played for the Miami Heat for four seasons, 2010-2014, but never officially moved to Florida for tax purposes, keeping his home in Akron, Ohio. He would have done better, tax-wise, to move to Miami, since Florida has no state income tax. But he still would owe jock taxes in states where he played away games.

In baseball, Los Angeles Dodgers superstar pitcher Clayton Kershaw saved millions in taxes by keeping his official home in Texas, a no-income-tax state, according to Robert Raiola, a certified public accountant in the Sports & Entertainment Group of the accounting firm O'Connor Davies, LLP. In particular, Raiola said, Kershaw’s $18 million signing bonus with the Dodgers was completely free of state income taxes. However, as soon as opening day occurred, and he was playing at least half his games in California, the highest income taxes in the nation on high-earners, 13.3 percent, kicked in.

Kershaw, who won the National League’s Cy Young award in two of the past three seasons, signed a seven-year $215 million contract with the Dodgers in 2014, the biggest contract in baseball history. According to Raiola, as a Texas resident, Kershaw will pay about $15.5 million in nonresident taxes to California over the life of the contract.

Raiola noted that for LeBron James, the Cavaliers will play 41 road games in the 2014-2015 season, many in states like Illinois (Bulls), Oregon (Trail Blazers), Utah (Jazz) , Colorado (Nuggets), Massachusetts (Celtics) and New York (Knicks and Nets) with income taxes. He will have to file in 19 states, including Ohio, and a few cities, including Cleveland.  He will get a credit against his Ohio income taxes for taxes paid to another state, but again, not more than the Ohio tax rate.

Some games will be played in states that do not have income taxes, such as Florida (Magic, Heat) and Texas (Mavericks, Spurs, Rockets). It all makes figuring out the tax bill a complex calculation.

“I don’t think it’s unfair,” Raiola said of the nonresident taxes for those who work in the states. “The rule applies to you and I. Whether it is enforced is another story. Athletes are high profile and are high salary. If they don’t pay taxes, they (the states) are going to get you.”