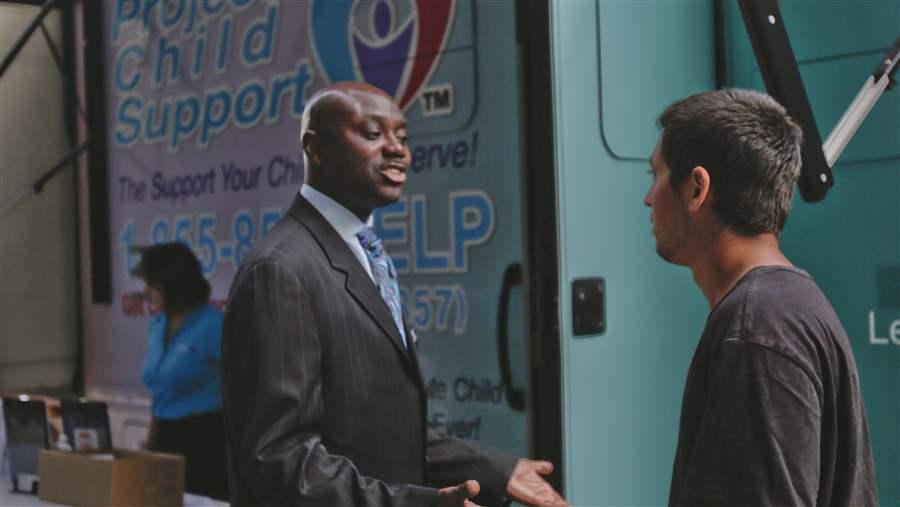 Project Child Support founder Kai Patterson, center, invites a man to discuss his case with an attorney outside the Essex County Family Courthouse in Newark, N.J. Child support is just one of the challenges facing cities and states as the number of "multiple-partner fertility” families increases in the U.S. (AP)

The Great Recession walloped almost every segment of American society. Millions lost their jobs, homes and businesses. Families lost trillions in household wealth. But a new study by a U.S. Census demographer finds that one group was hit hardest by the big downturn: “multiple-partner fertility” families, or families in which a woman has conceived children by more than one man.

The number of families with multiple-partner fertility, or MPF, is growing across all class and education levels. But they are more likely to be poor, uneducated and minority. They are people who have started life with significant disadvantages—and they tend to stay disadvantaged.

The complexity of their lives poses interesting challenges for state policy. A few state legislators are just starting to grapple with how to best help these families, from tweaking child support requirements to encouraging fathers’ involvement in their children’s lives.

The census study, conducted by Lindsay Monte earlier this year, found that MPF families spent significantly more time in poverty during the downturn and relied on food stamps much more than single-partner families did. “MPF families did experience disproportionate difficulties during the Great Recession,” wrote Monte, a demographer with the Census Bureau’s Fertility and Family Statistics Branch. (These families were not more likely during the recession to rely on welfare payments such as Temporary Assistance for Needy Families, the study found.)

MPF families have been around forever, largely the result of divorce and remarriage. But the phenomenon is growing across the U.S. as fewer Americans decide to marry, a trend that is particularly pronounced among millennials. More than half of all births to parents under age 35 are outside of marriage. Twenty-eight percent of all U.S. women with two or more children have children by different men, according to Cassandra Dorius, assistant professor of Human Development and Family Studies at Iowa State University.

“Today, we postpone marriage, but we don’t postpone children. That’s different from 50 years ago, when you got married and then you had your kids. That’s not the case anymore,” said Dorius, who conducted a national study of women at or near the end of their childbearing years to assess the impact of multiple-partner fertility on their lives.

Elizabeth Peters, director of the Urban Institute’s Center on Labor, Human Services and Population, said multiple-partner fertility puts kids in households that are more chaotic, and sometimes makes contact with the noncustodial parent more difficult. That makes it less likely they will receive the kind of parental investment that will help them grow into productive, happy adults. “These kids are just inherently more disadvantaged. That’s a policy issue. I don’t know what the policy solution is. You can’t legislate how people build families.”

Portrait of an American Family

Researchers first began studying multiple-partner fertility in 2005, almost by accident. They started out by exploring how some men “swap families” after they have a child with a new partner. These men sometimes limit their financial support of their previous children or stop spending as much time with them. They also might limit involvement with their children that live elsewhere when their ex-partners move in with or marry someone new.

Most of the emerging research is on the lives of mothers who bear children by more than one man, rather than on the fathers who have children with more than one woman. The vast majority of MPF women in their late 20s and early 30s live with all of their children, while the vast majority of MPF fathers do not live with all of their children, according to research conducted by Karen Guzzo, associate professor of Sociology at Bowling Green State University.

MPF is more common among minority women, with 59 percent of African-American mothers, 35 percent of Hispanic mothers, and 22 percent of white mothers reporting having children by more than one partner. But the issue is less tied to race than it is to class, Dorius said. Black families are more likely to be poor, for example, and African-American men experience a much higher incarceration rate than any other racial or ethnic group, leading to a shortage of available men.

“Very rich women and very educated women also have children with more than one man,” Dorius said. “This isn’t necessarily a racial story. (MPF) is really concentrated in early disadvantage and in America today, that’s caught up in race.”

According to Dorius, women who conceive children with multiple partners often get pregnant at a younger age and are not living with their partner when they give birth. They are also less likely to have support from their families, have less access to child care and report poorer quality relationships, according to Dorius.

MPF mothers also have more health problems and depression as they reach middle age. Stress tends to breed more stress: Young couples faced with early parenthood are at risk for breaking up and meeting someone else, and then having children with their new partners.

MPF impacts families across generations as well. Teens growing up in a home with half-siblings are more likely to use drugs and start having sex earlier than other children, according to Dorius.

“These children have to juggle across households. Every Christmas, every Thanksgiving, every holiday” is complicated,” Dorius said. “It makes family life really confusing. You can imagine a scenario where you have a mother and a father living together and with one child, he’s the (biological) father and with the other, he’s the stepfather. It makes for really complicated family life.”

Family scholars are trying to uncover whether having children with more than one person magnifies inequalities over the course of the mothers’ lives, Dorius said.

The higher your educational level, the more likely you are to have a child while married—and stay married. Couples faced with economic insecurity are less likely to want to stay together or marry, according to Arielle Kuperberg, assistant professor of sociology at the University of North Carolina at Greensboro.

“It makes it harder for people to plan for the future; it makes them less willing to settle down. Marriage is something that happens after they achieve financial stability. In the past, marriage was the path to financial security,” said Kuperberg.

The rocky economy and the erosion of stable manufacturing jobs have contributed to the low marriage rates. A few decades ago, a recent high school graduate could easily find a good job paying a living wage, one that allowed for buying a home and raising a family.

Today it’s much harder for young people to find steady work, even if they have college degrees. As the manufacturing sector has shrunk, more of the jobs that are available are seasonal or have irregular hours or don’t pay much, none of which are conducive to stable family life, according to Kuperberg. Full-time jobs with benefits are becoming more elusive as workers on the lower end of the job ladder have to cobble together multiple jobs and multiple shifts to make ends meet.

“If the economy continues to be very restrictive for young adults, as it gets harder and harder for young adults to establish themselves, we’ll see more unwed fertility, and more multi-partner fertility,” Kuperberg said.

State policies tend to focus on some of the issues surrounding MPF, rather than the phenomenon itself, according to Rochelle Finzel of the National Conference of State Legislatures. MPF families often rely on child support, which is an important source of income for custodial parents, specifically those with low incomes, Finzel said.

“States play a strong role in child support from the beginning of the process to establish the order to collecting and enforcing those orders. The child support program is continuously evolving to meet the needs of custodial parents and is increasingly looking at ways to better engage with noncustodial parents to ensure they are able to provide consistent and reliable support,” Finzel said.

Still, cautioned Dan Meyer, a professor in the School of Social Work at the University of Wisconsin-Madison, “child support policy is particularly difficult. It’s not just how to divide up the payments that are made; it's how much we should expect” noncustodial parents, usually fathers, to pay under child support orders.

Often, a father with children by different mothers will end up paying a disproportionate share of child support: if a father has two noncustodial children by the same mother, he would pay less for the second child. A father with two different children would be required to pay the same amount for each child.

While the bulk of legislation has focused on collection and enforcement measures, many states have taken a direct look at military families to make sure the child support program meets their unique needs, according to Finzel. Legislators are also talking more about how child support program can better help noncustodial parents (often fathers) to help them find employment so they are able to pay their child support obligations, she said.

There are limits to what policy can achieve, Dorius said, and could potentially run the risk of needlessly interfering in how people choose to build their families. Ultimately, she said, most women who’ve had children with multiple men end up marrying one of their partners and forming stable marriages.

“We tend to think of women with MPF as being only poor single women with little education and money, and it is true that they tend start out that way,” she said. “But these women represent a large segment of American society, and over the decades that we studied these families, most of the women married, went to school, and held full time jobs; basically, doing all the things you’re supposed to do to live the American Dream.”