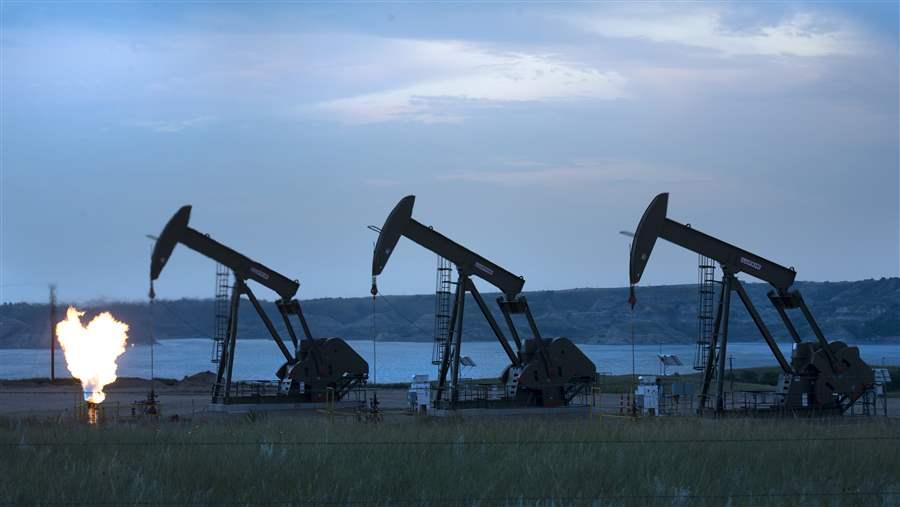 View of three oil wells and flaring of natural gas near New Town, North Dakota. The oil and gas mining sector became a major employer in several states between 2008 and 2012, according to a Stateline analysis of census data. (Getty)

The number of private employers decreased in most states during the recession, but not in oil-rich states, New York or the District of Columbia, a Stateline analysis of recent census data found.

The County Business Patterns data for 2008 and 2012 show the terrible toll of the recession, which officially ended in June 2009, on businesses around the nation. Only six states and the District Columbia had more employers in 2012 than in 2008.

A major shift occurred in the 39 counties where oil and gas operations became the largest employers, including counties in Louisiana, North Dakota, Oklahoma, Pennsylvania, South Dakota, Texas, Utah, West Virginia and Wyoming. In most of those counties, oil and gas businesses took over as the top employers from restaurants, hotels, bars and other hospitality businesses.

Many of the states with employment gains despite the recession were oil boom states. Those with more employers in 2012 than in 2008 were Alaska, Nebraska, New York, North Dakota, South Dakota and Texas, plus the District of Columbia.

Nationwide, restaurants were the largest employers in more counties than any other business, in both 2008 and 2012. In 2012, restaurants (either full-service or fast food) were the top two employers in 1,603 counties, roughly the same as in 2008.

Rise of the Professional Employer

In Florida, the biggest employer category is professional employer organization (PEO), also known as a staff-leasing service. These operations serve as the employer of record for contract employees who work for small- to medium-size companies. The arrangement helps firms avoid the overhead of human resources departments and paperwork, and these PEOs can sometimes get better rates for expenses like worker’s compensation.

In Florida, there are 668,178 employees listed in 164 PEOs in the latest numbers, down from 825,049 in 2008. They are not associated with any county but appear under statewide employers in the County Business Patterns data.

That’s a lot more employees and a lot more PEOs than any other state, although Texas and California each had about 180,000 PEO employees. At the low end, South Dakota had only 39 and Vermont, 44.

Brandon Chenault, who has worked as a broker for PEOs in Florida and Alaska, said it’s not as familiar yet in other states. “In my experience it’s still fairly unknown in the state of Alaska (which has seven PEOs), and in Florida they’re very familiar with it,” Chenault said.

The PEOs caused confusion within Florida for a few years until a state law established how they should report their employment. In 2008, Florida economists thought the state’s cluster of PEOs, centered in the Tampa Bay area of the state’s Gulf Coast, was causing artificially high job creation numbers for that area. This was because PEOs were reporting all new hires as Tampa jobs, where the PEOs were located, instead of in the jurisdictions where they actually worked.

In 2010, a new state law required that PEO jobs be reported in the clients' counties, not the PEO’s county.

“Those payroll data matter to the state because they’re used to calculate the wage index used to allocate school funding,” said David Denslow, research economist for the state Bureau of Economic and Business Research. “It also messes up our understanding of what's happening in labor markets in particular cities.”

The National Association of Professional Employer Organizations, a trade group, is trying to sort out the numbers, said spokesman Kerry Carruthers. The number of PEOs has risen steadily since 2010, she said, but it’s not clear how many there are, or how many jobs they control for clients, because some report client jobs and some report only their own administrative staffs.

“We can’t really rely solely on government data to tell us the footprint of our industry, since there are still some states that do not have PEO licensing or registration requirements,” Carruthers said. States have varying rules about how they can operate, according to a 2012 review by the National Council on Compensation Insurance.

“We are in the process of working with an economist to develop some of this information for ourselves, but we are early on in that process,” Carruthers said. “Our experience is that Florida has the most accurate and comprehensive data. It is definitely the most PEO-heavy state, with a lot of regulation and oversight of the industry.”

PEOs flourished in Florida first because “Florida has smaller employers than most other states, and they’re glad to have someone handle the paperwork,” Denslow said. “Another explanation given is that the state over-regulates the labor market, making it helpful to hire a specialized firm to do the paperwork.”

PEOs are thriving, Carruthers said, because small businesses were the first to recover after the recession and PEOs tend to cater to such firms. Some researchers say that small businesses are uniquely prepared to deal with economic crises, or that employees displaced from larger companies by layoffs are finding a new path with small business.

“Local entrepreneurship activities or self-employment can play a significant role in mitigating the adverse impacts of trade shocks,” the study concluded, possibly because they have more flexibility to respond to changing conditions.  Policy makers and economic development advocates should keep that in mind, it said, when using tax breaks to encourage new jobs and the Trade Adjustment Assistance program, a federal program used in cooperation with states to help workers displaced by foreign trade.

The County Business Pattern data seem to support the idea that small businesses were less affected by the recession than larger employers, at least in terms of their overall numbers. Nationally, the number of larger employers with 100 or more employees dropped by 6 percent, while the smallest, with less than 10 employees, dipped a more modest 2 percent.

In 44 states, smaller businesses with less than 100 employees fared better than larger businesses, in terms of their overall numbers. The exceptions were the mining and energy-producing states Alaska, Arizona, Idaho, North Dakota, New Mexico, Vermont, West Virginia and Wyoming.