When the Dallas Police Department sent out a tweet this summer alerting the public that Denver Broncos cornerback Aqib Talib had been arrested for public intoxication, the social media world lit up.

There was only one problem: Aqib Talib wasn’t busted. It was his brother, Yaqub Talib.

The department tweeted an apology within hours, followed by a press release. But the incident showed how quickly local or state government officials can commit a social media blunder that can lead to embarrassment and retractions.

As more government agencies and elected officials scramble to put the word out on sites such as Twitter, Facebook and in blogs, some are learning the hard way that they might need to take a step back and rethink the way they use social media.

“There are huge repercussions when you get it wrong or when you do it poorly,” said Lauri-Ellen Smith, the chair-elect of the Public Relations Society of America’s public affairs and government committee. “These are tools that can be very powerful and potentially dangerous to one’s career. My advice is to step away from your smartphone and take a breath,” said Smith, who is press secretary for the Jacksonville, Florida Sheriff’s Office.

Individual legislators also are turning to social media to communicate with constituents, promote legislation or post photos of their daily activities.

Sometimes that kind of instantaneous communication gets them into trouble.

Take the case of Arizona Republican state Rep. Adam Kwasman, who was attending a protest against the anticipated arrival of undocumented immigrant children at a shelter in July. He tweeted a photo of a yellow school bus, typing: “Bus coming in. This is not compassion. This is the abrogation of the rule of law.” The bus turned out to be filled with campers headed for the YMCA. Kwasman deleted his tweet and issued an apology, saying he had erred. 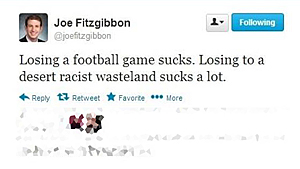 In Washington state, Democratic state Rep. Joe Fitzgibbon got into hot water last December, when, upset by the Seattle Seahawks’ loss to the Arizona Cardinals, he tweeted: “Losing a football game sucks. Losing to a desert racist wasteland sucks a lot.” Fitzgibbon later deleted the tweet and said that if people took it too seriously, he was sorry. About 24 hours after sending the original tweet, he published a lengthy mea culpa on his Facebook page.

And in Minnesota, Republican state Rep. Pat Garofalo created a stir when he wrote what he thought was a sarcastic tweet in March: “Let’s be honest. 70% of teams in NBA could fold tomorrow + nobody would notice a difference w/possible exception of increase in streetcrime.” The following day, Garofalo put out an apology, saying that the NBA had “many examples of players and owners who are role models for our communities and for our country.”

NCSL spokesman Mick Bullock said that social media can be a great tool for legislators, giving them an unfiltered platform to communicate directly with their constituents. But legislators first need a plan, he said, to figure out what they want to get out of social media.

Then, they might seek training in how to use it properly and effectively, he said. That can range from a legislator getting tips from a savvy staffer to a more formal process in which NCSL experts have visited some states, such as Alaska, and offered legislators and staff training not only about how to use social media, but also about the legal and ethical considerations.

“Elected officials are no different than the private sector,” Bullock said. “We have to be careful in this age of instant communication. Something you put out right now can be worldwide in a matter of seconds.”

Bullock said that his personal practice is not to put Twitter or Facebook on his smartphone at all to discourage an impulsive message. “We’re human beings. A thought comes into our head and we think it’s a great idea,” he said. “This gives you time to think about it and formulate your thoughts before you go back to your computer and start typing. I follow that practice religiously.”

But Pennsylvania Democratic state Rep. Michael Schlossberg, who writes a blog about social media and politics, said he thinks that’s extreme, especially because elected officials often want to tweet at events or upload live photos. But he agrees with Bullock that training is the key and that ultimately, elected officials need to remember to pause and think before they post.

“A good rule of thumb for any public official is to never put anything on any social network that you wouldn’t be comfortable with appearing on the front page of your local paper,” Schlossberg said. “When you put something out there digitally, it’s out there forever.”

Schlossberg said that many elected officials aren’t technically inclined or are unfamiliar with social media, and that can lead to disasters. But even people like him who tweet all the time can make a mistake.

He recalled how he was at the gym last month when he tweeted a snarky comment about a Republican and a newly released political poll. Then he remembered the date: Sept. 11. Schlossberg said he quickly deleted the tweet, and wrote a new one, saying: “Deleted earlier tweet. Today is not the day to comment on polls. My mistake.”

“Everybody is human. If you’re a relatively prolific Twitter user, you’re going to screw up. And mistakes get magnified,” he said.

State and local government agencies routinely turn to social media to get the word out. But how they do it and whether they have strict policies in place vary considerably.

A 2012 nationwide survey by the National Association of State Chief Information Officers (NASCIO) found that 100 percent of respondents said their states used social media in some manner. More than 80 percent used Facebook, Twitter and YouTube moderately or widely.

Meredith Ward, a senior policy analyst for NASCIO who focuses on social media, said states and localities should make sure that information they’re putting out is accurate and timely.

“They should treat social media as if it’s a press statement,” she said. “If someone is following you on Twitter, they take that as your word, just as though it’s an official press release.”

NASCIO’s survey found that more than half of states had social media policies and standards in place and another quarter were working on them. But while a state may have an overall policy, often it’s up to individual agencies and departments to decide how they use social media.

The Texas Legislative Research Library, for example, decided to take a cautious approach when it set up its Twitter account. Library Director Mary Camp said that a group of librarians reviews the information, makes sure it’s unbiased and does self-editing before anything is posted.

“We don’t want an arduous process, because we want it to be timely and current,” Camp said. “But we also don’t want unedited, raw stuff out there.”

Government agencies and elected leaders also need to be extra careful about who is authorized to do the posting, said Glen Gilmore, who runs a social media marketing firm and teaches crisis communications and social media law at Rutgers University. If someone is posting on an agency’s behalf, for example, that person needs to be mature and understand the strategic purpose, he said.

“For government and politicians in particular, they’ve got to pause and reflect that social media is the primary means of communication globally,” Gilmore said. “They should think carefully about who they entrust their social media accounts to. A single tweet can do a lot of harm.”

In Utah, a controversy erupted in February over Twitter banter between Republican Senate President Wayne Niederhauser and one of his Senate colleagues. In their tweets, they made light of a bill that would bar discrimination against transgender people. Less than two hours later, Niederhauser tweeted an apology, blaming the post on an intern and saying it did not represent his point of view.

Gilmore warns that whether interns or staffers commit a social media gaffe, their boss is ultimately responsible.

“It says something about their judgment if they entrust a powerful tool for communication to someone who doesn’t have the level of experience or understanding that would be expected in the traditional communications realm simply because it’s Facebook or Twitter,” Gilmore said.

Pennsylvania Rep. Schlossberg puts it even more bluntly: “Never have an intern manage your social media. They don’t have the training or accountability that a staffer will. And if a staffer is tweeting under your name, you’d better make sure that person is on the same page as you, in terms of messaging and communication.”

Blunders can be especially problematic for police agencies, which use social media to, for example, solicit tips or put out crime alerts.

In the case of the Dallas police’s botched tweet, a spokesman wrote that the Broncos’ Talib had been throwing bottles and causing a disturbance when he was arrested for public intoxication at a nightclub in June, when, in fact, it had been his brother. In a follow-up news release apologizing to Talib, the department explained that the error was based on a miscommunication and that the process was “not in keeping with normal protocol.”

The New York City Police Department also ran into social media trouble in April, when it created a Twitter hashtag campaign in a community outreach effort and tried to get the public to tweet photos of people interacting with police. The plan backfired when the public instead began posting images of alleged police brutality.

In May, the NYPD decided to follow the lead of police agencies in other cities, such as Boston, by requiring Twitter training for some staff. Over the past several months, NYPD commanders have attended Twitter classes taught by the department’s social media team at John Jay College of Criminal Justice. They’ve learned not only how to use Twitter to engage with the public, but also how to avoid committing gaffes.

“Social media is an evolving technology. Agencies are still learning how to use it and adapt to it. Keeping up with that is a challenge,” said Nancy Kolb, who oversees the International Association of Chiefs of Police’s Center for Social Media, which provides resources and training to police agencies.

A 2013 survey by the association found that about 96 percent of 500 law enforcement agencies in 48 states used social media, often for criminal investigations. About 70 percent said that they had a social media policy and another 14 percent were in the process of crafting one.

But Kolb cautioned that for police agencies to use social media responsibly and effectively, they need to develop policies and provide training and education. And they—just as other government agencies—should ensure that the right people are handling their tweets and blogs.

“If you have a patrol officer who hates technology and can barely turn on a computer, that’s probably not the person you want in charge of your social media,” Kolb said. “On the flip side, just because someone is young and might be using these tools in their personal life, that doesn’t translate directly to being able to speak on behalf of the agency on social media.”