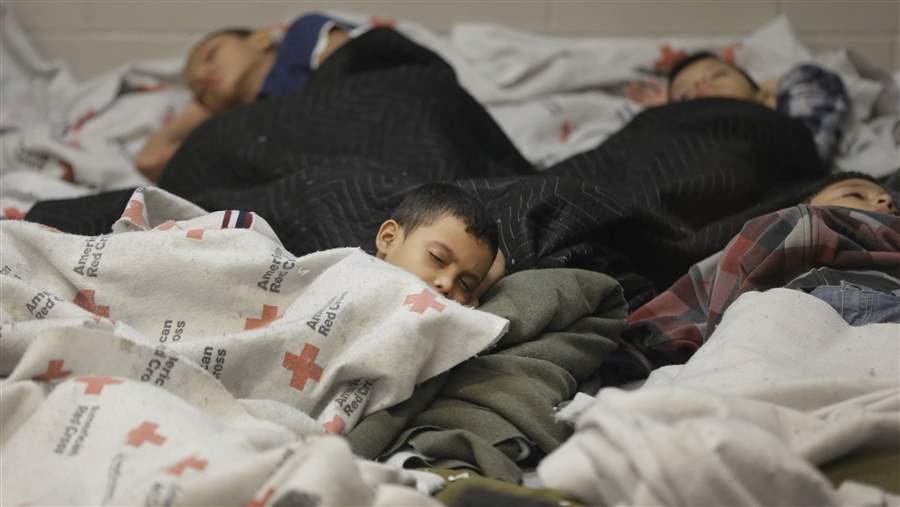 RICHMOND, Va. — Asein Ta wasn’t yet a teenager when he left his native Myanmar (also known as Burma) and followed his uncle, who hobbled on one leg, on a treacherous three-day journey across mountains and into one of Thailand’s largest refugee camps.

“He said there was good out there, something different,” said Ta, now 21. Ta’s mother sent him away so he could escape the persecution his family and other ethnic Karens faced in their native land. She died shortly after he left.

Five years later, Ta was on a plane to Richmond, Virginia, helped by a little-known resettlement effort called the Unaccompanied Refugee Minors (URM) program, which is operated by the U.S. government with help from states and local charities. In nearly 35 years, the program has helped some 13,000 children from Southeast Asia, Africa, and Latin America to escape from war, persecution and natural disasters.

Now some see URM as a way to help some of the unaccompanied Central American children who have been surging across the U.S. border with Mexico. In fiscal year 2014, 44,000 children crossed the border alone, compared to fewer than 4,000 in 2011, as Stateline has reported. The influx has swamped border detention and processing facilities.

The U.N. High Commissioner for Refugees has argued that the Central American children, some of whom have been victims of violence, trafficking or other crimes, are refugees who should be eligible for asylum. But the U.S. government has not given them that designation as a group, which would help open the door to URM eligibility.

There’s also the question of the program’s limited resources: URM served 3,828 children at its peak in 1985, and today it serves about 1,800. It’s unclear whether the program could be expanded to serve a significant percentage of the Central American kids if they were deemed to be eligible. 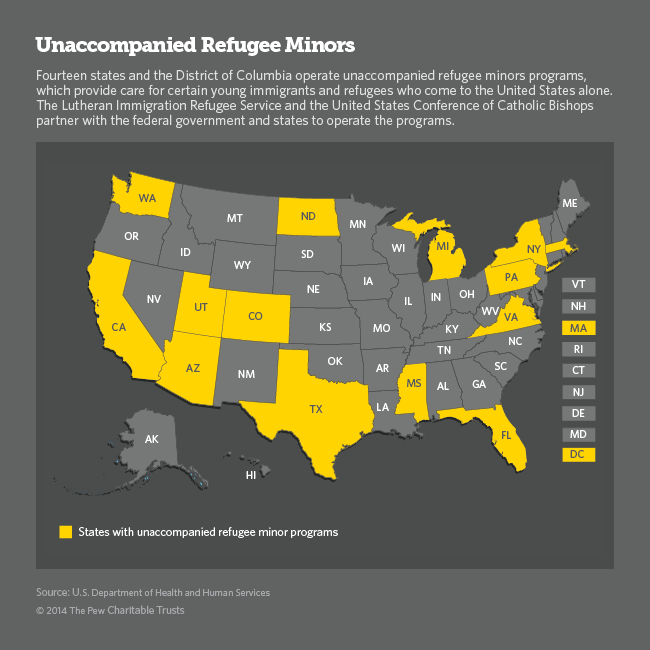 Nevertheless, some argue that granting refugee status to the Central American children would be the surest way to get them the help and care they need. Kimberly Haynes of Lutheran Immigration and Refugee Service, which partners with the federal government and states in operating URM, said there is little difference between the Central American kids and refugees from Asia or Africa who’ve enrolled in the program over the years.

“It’s scary to recognize that both populations have the same level of traumatization,” Haynes said “You can’t really distinguish the difference. The situations are pretty horrific.”

Fourteen states and the District of Columbia administer their own URM programs. The federal government relies on states and local agencies to carry out the program, since they have the most experience providing social services such as foster care and housing aid.

Federal money for URM flows through the Office of Refugee Resettlement, which is part of the U.S. Department of Health and Human Services. As attention to refugee crises has grown since the early 1980s, more states have agreed to participate.

Under the program, states are required to ensure that children get health care, legal aid, education, housing and other services. Two private agencies, the United States Conference of Catholic Bishops and Lutheran Immigration and Refugee Service, both of which have experience in dealing with refugees, also supply case workers and caregiving help.

The states also are responsible for monitoring the programs and for covering any ancillary costs, but the core benefits are paid for by the federal government. In the current fiscal year, the federal government is set to spend $383 million on “transitional and medical services” for refugee programs, which includes URM, among other programs.

Workers connected to URM were at the Richmond airport to welcome Ta when he arrived in March 2008 with little else but a few personal belongings, a traditional monk’s robe for clothes, and a shaved head, owing to his time spent at a monastery in the refugee camp.

“If it wasn’t for this program, I wouldn't have had a family,” Ta said. “It’s like a second chance to have a family.”

The core of URM’s work is placing a child in a foster home. Because a child’s family situation can be unclear, the children in the program can’t be adopted. Legally, they are wards of the state.

Ta has come a long way since arriving in America six years ago. During his first summer, he spent virtually all his waking hours learning English, flipping through flash cards while in the car or eating dinner. It was frustrating at first, he said. “But remember, I was a Buddhist monk.”

He’s since moved away from the monk lifestyle —“The American life is too busy,” he said — and he is attending community college in Richmond with the goal of becoming a teacher.

Ta clearly was a refugee. The status of the Central American children is much murkier.

The way to determine refugee status, and eligibility for URM, is to investigate the circumstances of their lives back home. The federal government has dedicated more resources to doing just that.

President Barack Obama earlier this year opened the door for the children to be treated as refugees when he said that some of the Central American children might apply under “narrow circumstances.”

He cautioned, however, that “refugee status is not granted just based on economic need or because a family lives in a bad neighborhood or poverty.” Obama also noted that it is better for people to apply for refugee status in their home countries before making the trip to America.

The federal requirements are a high bar for many of the Central American children, and identifying those who might be without family entirely is even more challenging, said Kristyn Peck of the United States Conference of Catholic Bishops. “They’re not necessarily going to come forth and say, ‘I’m a refugee, help me,’” she said.

To those who argue the Central American kids are not refugees, that is as it should be. “In the case of genuine refugees, these services are very appropriate,” said Jessica Vaughan of the Center for Immigration Studies, a nonprofit research organization which generally advocates tighter immigration policies. “People feel sorry for them, and there’s no question that times are tough in these countries. But generalized violence, or civil unrest, or lack of civil society, has never before been an excuse for designating people as refugees.”

Expanding the scope of refugee status, Vaughan warned, could undermine efforts that she sees as more worthwhile and in keeping with the common definition of such programs.

“When people feel they’re being abused, it threatens the existence of the programs,” Vaughan said. “They’re not cheap, and so they shouldn't be used gratuitously.”

Some fear that giving refugee status to the Central American children who arrived in the country illegally would label URM as a program for unauthorized child immigrants. Several officials connected with local chapters of the program, contacted during the height of the Central American surge, refused to speak about it, fearing their care for refugees would be linked with the politicized and controversial issue of illegal immigration.

Those who were willing speak about URM offered effusive praise for it. One of the program’s key tenets is to offer refugees opportunities, if possible, to live with foster parents or other refugees of similar cultural backgrounds. Absent that, workers will seek out potential mentors in local refugee or immigrant communities. It also offers cultural education and activities as part of its services.

And because the children are building new lives in America, there’s a sense of stability and continuation of care that’s unique among other foster care programs, they say.