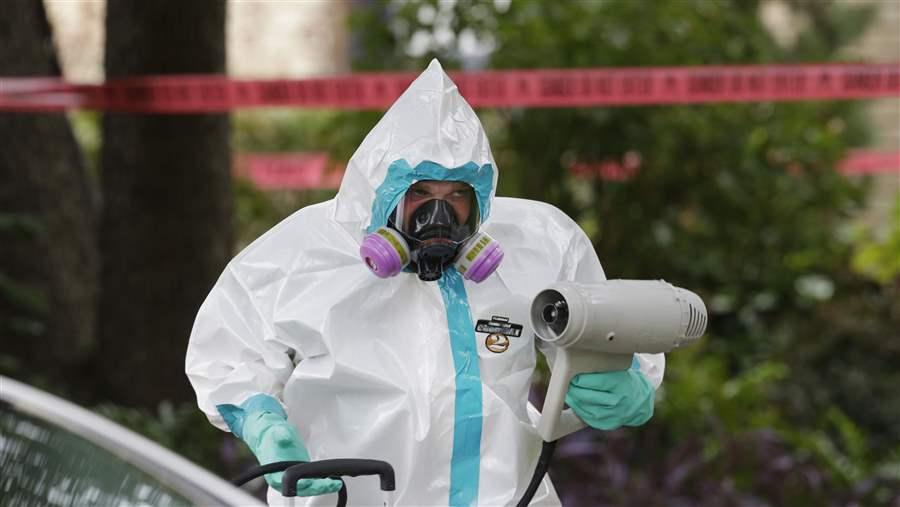 A hazmat worker cleans outside the home of a nurse who contracted Ebola after caring for Liberian national Thomas Eric Duncan, who died of the disease at a Dallas hospital on Oct. 8. Nationwide, state, county and city health officials are preparing for a potential outbreak of the deadly disease. (AP)

As fears of an Ebola outbreak rise, federal agencies are taking steps to protect and inform the public. The Centers for Disease Control and Prevention in Atlanta is taking the lead on most aspects of the effort – issuing containment guidelines to hospitals and other health workers, training airport personnel on screening methods, and creating uniform lab tests to diagnose the deadly disease. But as in all public health emergencies, state and local public health departments are the nation’s first line of defense.

What role do state and local health agencies play in protecting the public?

State and local health department workers are often first responders, communicating directly with residents and health care workers, as well as coordinating with related agencies and hospitals through established communication networks. They also manage public health laboratories that test for the virus.

For example, when the Liberian national, Thomas Eric Duncan, tested positive for Ebola in September, the Texas Department of State Health Services reported the laboratory results to the hospital that was treating him and the Dallas County health agency began tracking down people who had direct contact with him. Later, the state agency issued quarantine orders for those who had come in contact with Duncan, the Dallas County Sheriff’s Department delivered the orders and county health officials checked the temperatures of those who were quarantined.

How is the CDC working with state and local agencies and health workers to coordinate Ebola preparedness?

As in all potential infectious disease outbreaks, the CDC is communicating through the National Association of County and City Health Officials (NACCHO) and the Association of State and Territorial Health Officials (ASTHO) to prepare individual health agencies across the country to respond to a case of Ebola in their jurisdictions. In August, after the Ebola outbreak in West Africa, the CDC began issuing guidelines for screening, isolating and diagnosing potential Ebola patients in the U.S. and controlling the spread of the disease.

State and local agencies in turn began working within their jurisdictions to answer questions from hospitals, health care workers, law enforcement and other related government agencies, as well as inform the public.

In addition to infectious disease outbreaks, the CDC uses these networks to communicate with tens of thousands of health care workers across the country before, during and after other public health emergencies, including natural disasters, biological or chemical contaminations, terrorist attacks and widespread foodborne illnesses.

Who is in charge?

States vary in the way public health is governed and funded. Some states staff and manage nearly all local public health agencies and others run a single agency for the entire state, leaving counties and cities to run their own independent public health departments.

In general, all public health emergency efforts begin at the local level, extending to state and federal levels as needed. The CDC provides substantial funding for state and local public health agencies, but does not control their activities. Instead, the federal agency provides guidance and assistance as needed.

In Dallas, for example, the CDC sent a team of experts to help state and local authorities track down people who came in contact with Duncan.

Do states have legal authority to quarantine residents?

Some states do and some don’t.  If a state does not have direct authority to quarantine, set curfews or otherwise isolate or screen residents for contagious diseases, it must either seek a court order to do so or ask local health authorities to issue an order.

In Texas, for example, the state health agency had authority to isolate those suspected of carrying the Ebola virus. But in Connecticut, Democratic Gov. Dannel Malloy just declared a statewide public health emergency so the state, rather than local health authorities, could order quarantines.

According to The Network for Public Health Law, conflicting state and local laws and overlapping jurisdictions can complicate important public health decisions, such as quarantines, school closures, vaccinations and curfews during a public health emergency. In many cases, emergency administrative orders or statutes are enacted.

Do state and local health agencies have direct authority over hospital procedures?

No. The nation’s roughly 5,000 hospitals cooperate with federal, state and local authorities during a public health emergency on a voluntary basis. Their primary job is to ensure the health and recovery of individual patients. Public health officials work alongside hospitals to make sure they know the most recent public health disaster plans.

How many public health laboratories are ready to test for Ebola?

So far, 18 state public health laboratories out of about 100 in the country stand ready to test patient samples for the Ebola virus. They are located in:

More labs will become ready in the days ahead, according to the Association of Public Health Laboratories, particularly in locations close to the five airports (in Atlanta, Chicago, New York, Newark, New Jersey and outside Washington, D.C.) that the U.S. government has designated for Ebola screening of visitors traveling from West Africa.