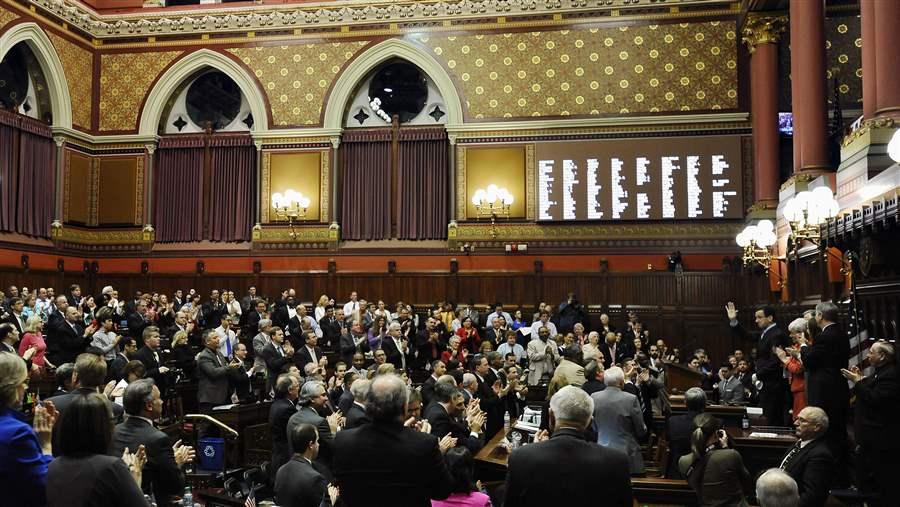 Democratic Gov. Dannel P. Malloy (right) of Connecticut addresses state legislators on the final day of the legislative session in May. Connecticut and other states that heavily rely on income taxes are having a hard time crafting budgets as income tax revenue has become increasingly volatile. (AP)

Income tax revenue, once a reliable workhorse for states, is increasingly volatile as more of it comes from wealthy taxpayers, who are disproportionately affected by economic booms and busts. The unpredictability and the fact that the revenue is growing more slowly are creating major budgeting challenges for states.

Because the incomes of the wealthiest Americans are growing at a rapid clip as middle-class wages stagnate, wealthy households account for a higher percentage of the tax collection barrel. The problem for states trying to predict revenues is that stock market fluctuations and other cyclical events have a larger impact on incomes at the top, causing revenues from income taxes and capital gains taxes to vary widely from year to year, according to a new report by Standard & Poor’s Rating Services. In most states, however, demands on the money keep accelerating.

While state tax revenues have grown in recent quarters since the recession and are expected to continue to rise for most states, that growth is anemic compared to years preceding the recession. Overall revenues in the top 10 most income tax-dependent states have grown only 5.25 percent since 2009, S&P reported, compared to growth rates of an average of 9.32 in 1980-1989, and 5.7 percent in 1990-1999.

“State tax revenues have become more volatile, greatly complicating the task of budgeting,” the report said. And, the problem gets worse. “Because it is a structural economic problem, it is unlikely that states can fully correct for it solely by adjusting their tax policies,” S&P said. 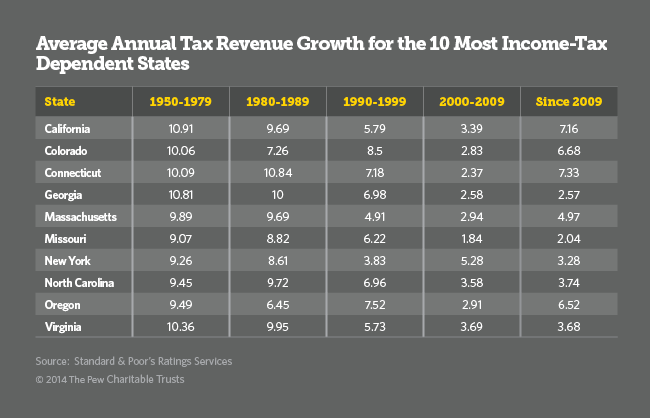 The top 10 states that are most reliant on the income tax, according to S&P, are California, Colorado, Connecticut, Georgia, Massachusetts, Missouri, New York, North Carolina, Oregon and Virginia, with California ranking most reliant. Nine states—Alaska, Nevada, South Dakota, Texas, Washington, Wyoming, Florida, New Hampshire and Tennessee—have no income tax or a miniscule one.

“The volatility (in income taxes) coupled with the decline (in income tax revenue growth) is a nasty combination,” said Gabe Petek, S&P analyst who authored the report. “I don’t envy the state fiscal officials when that's the environment they are working in.”

The problem with tax stream volatility, according to Don Boyd, analyst with the Rockefeller Institute of Government, is that “it’s no way to run a government.”

“What does state and local government spend money on? K-12 education and health care for the elderly and very disabled,” he said. "When the revenue goes down, you don’t have a drop of kids in school and you don’t have a drop in elderly health treatment. You have to provide those services even when revenue falls off dramatically.”

According to a new Rockefeller report, states overestimated revenues by more than 10 percent in fiscal 2009, which was during the Great Recession. The report said the forecasting errors tend to be bigger during down times, but were even greater during the most recent recession, compared to an earlier recession in 2001, suggesting the problem is getting worse.

Connecticut, which ranks third on the S&P list of top 10 states most dependent on income tax, is particularly aware of this phenomenon, according to state Revenue Commissioner Kevin B. Sullivan. Sullivan said the income tax stream has two parts, ordinary wage earners and the super wealthy.

Forecasting revenue from wage earners is the simpler part of the equation, he said, even during a recession, because paychecks are a regular source of income. Predicting what the super-rich are going to do is a problem. “In states like Connecticut, New York, Rhode Island and Massachusetts, we literally track 20 or so multi-millionaires,” he said. “Any one of those people, depending on whether it’s a good year or a bad year, can have a noticeable impact on the revenue stream.”

Connecticut has formed a task force to study the state’s various taxes and assess whether those levies are bringing in enough money or whether the system needs changing. Various efforts to tweak the tax system during this year’s legislative session were all put off in favor of the task force.

Democratic Gov. Dannel Malloy came into office in 2011 with a tax increase plan, which the legislature approved. His desire to offer tax rebates early this year were derailed when revenues came in lower than expected. Malloy is now in a close re-election race with taxes emerging as one of the primary issues.

Connecticut already has a diverse tax system, Sullivan said, citing income, sales and business taxes as its three biggest legs. “There are not a lot of places to go, so you have to adjust to the volatility,” he said. He noted the state has built back its rainy day fund to almost $400 million, after it dwindled to nothing during the recession.

Rainy day funds can cushion some of the volatility in tax revenue system, but not all of it. Democratic state Rep. Patricia Widlitz, who helped set up the tax force, and who is an ex-officio member, said Connecticut's overall tax structure has not been comprehensively studied since 1990.

“One of the charges to the committee is to look at volatility,” she said. “Certainly when there are capital gains there is roller coaster revenue coming in when people sell (stocks) and pay the capital gains tax. If you budget that way for the next year and it doesn’t happen, you have a deficit,” she said.

For states trying to manage the tax revenue uncertainty, these are difficult days.

According to a Pew Charitable Trusts report earlier this year, “Managing Uncertainty: How State Budgeting Can Smooth Revenue Volatility,” states need to take a close look at the causes of volatility and revise revenue forecasts as close to the final passage of the state budget as possible, while planning for possible shortfalls or surpluses. The report by Pew (which also funds Stateline) also called on states to save money in reserve funds during good times.

In Missouri, sixth on the S&P’s list of most income tax-dependent states, the legislature this year voted to reduce the income tax rate from its current level of 6 percent down to 5.5 percent in five steps by fiscal 2017. Budget Director Linda Luebbering said the projected net revenue loss from the measure is estimated to be $621 million when the cut is fully implemented.

“Their (the legislature’s) intent was that it would increase economic activity and revenue,” she said. “What we’re saying is that it’s likely going to result in less revenue we have in the budget, and we will have to reduce spending.”

The Missouri lawmakers did leave themselves an escape hatch: If overall revenues do not grow by at least $150 million, the cuts will not take place.

According to S&P’s report, state tax revenue growth in Missouri since 2009 has been a meager 2.04 percent, compared to growth of 6.22 percent in the boom years of 1990-1999. During the recession, Missouri’s revenue growth was only 1.84 percent.

In Colorado, second on the S&P list, revenue volatility is just one of the budgeting hurdles. The state has a TABOR (Taxpayer Bill of Rights) limit, which requires the state to give refunds to taxpayers if revenue goes above a certain limit. In addition, the TABOR outlaws tax increases without a referendum. Budget experts say the TABOR limit, combined with volatility, makes budgeting even more difficult.

The TABOR law is often broken, according to Colorado Sen. Kent Lambert, ranking Republican on the legislature’s Joint Budget Committee, as the legislature has sometimes imposed “fees” in lieu of taxes.  Lambert isn’t worried about volatility and budget shortfalls, noting that the state has been able to restore money to the rainy day fund in the past couple of years. He says if revenue doesn’t meet projections, the state should spend less.

“I haven’t seen huge shortfalls in my opinion,” he said. “We have not gone far enough to look at efficiencies, particularly in K-12 education.”

But his Democratic counterpart on the budget committee, Sen. Pat Steadman, said one way around the income and capital gains tax volatility is to look at property taxes, which have less volatility. “Yet, it’s the least popular tax out there,” he said.

“You are not going to succeed in shifting financing to a more stable revenue stream that’s incredibly unpopular with the voters,” Steadman said. And the state rejected a ballot issue in 2013, he said, that would have increased the income tax rate to support public schools. “That went down in flames.”